Well, there has not been much to report.  Tuna fishing was a major bust, other than one successful albacore trip in July followed by half a dozen high mileage trips to skunkville in the offshore waters off San Diego for the remainder of the season. I did not get out for the quail opener and I have not made it out for any pheasant shooting at any of the local clubs, much to the dismay of our pointer, Victor the Magnificent.  We have not made it out for lobster season and the word is that the scene is getting more aggressive than fun at our favorite spots anyway.
On Sunday, October 24th, we returned from a visit to Wendy's folks in Long Beach to our rain soaked residence.  We had recently experienced signs of rat activity on the roof.  We had set traps and purchased those electronic devices designed to make the rats leave the wall spaces where they have been making noises adjacent to Lizzy's bedroom near the roof connection that seemed to be a point of access.
When we went to the side yard to take out the trash cans for the Monday pick up, Isaac noticed a rat near the roof gutter on that side of the house.
We quickly sprung into action.  I went upstairs to remove our trusty .22 pellet guns from their place of locked storage and silently pushed past the  neighbor cub scout  and his father who appeared at our front door to solicit funds at this very moment of invasion.  Perhaps our armed rudeness startled him, but we left Wendy to deal with them in a more civilized fashion.
Isaac and I cocked and loaded our single shot pest control devices and lined up simultaneous shots when the rat poked his head out.  Both shots made one sound as we counted down to achieve a double hit.
I climbed up a ladder to remove the first course of roof tile when we heard another one scuttling along a barge rafter to the edge metal below the tile.  He stuck his head out and we lined up another quick shot that ended his curiosity.  We got one more in a 15 minute killing spree.
We all hate rats, but usually catch them in traps, which is gratifying, but not nearly so cool as taking them down in real time with the family tools of the trade.  The little boys (Tommy and Davey) were  impressed with our marksmanship, the girls were horrified, but grateful, and the cub scout learned a bit of suburban game craft that may come in handy against a common enemy.
We have recently gone into an experimentation with a vegan lifestyle, so our victims were not treated in the usual culinary fashion we apply to creatures we shoot, but it was a great day just the same.

Here is shot straight out of Fred MacMurrays suburban dream.  Find your fun where you can, because 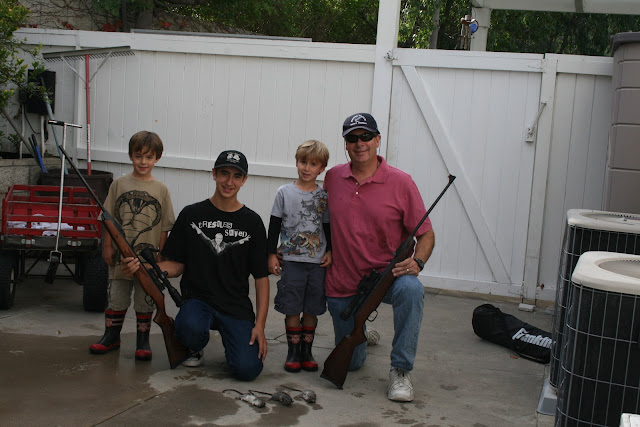 Email ThisBlogThis!Share to TwitterShare to FacebookShare to Pinterest
Labels: hunting