Don't Be Disgruntled. Be Determined

The Steelers were harshly removed from the playoffs on January 3rd.  On January 4th, free from having a dog in the fight, I went fishing for local yellowtail with Dan Gorman and Chris Vansell on Dan’s beautiful Cabo Express, named "Determined."

That is a word I can get behind.


I got the invite the day before when Chris passed by my house on his way to walking his dog up the trail.  He stopped to say Happy New Year as I was throwing the football with Tommy and Davey in the front of the house.  Chris mentioned he was going to try and catch a yellowtail with his buddy and asked if I wanted to go.  I said no, because it was the last day all of the kids would be home before school started back up.  Chris said he understood and moseyed on up the road toward the trail head.


When I walked back in the house, my wife Wendy Jo and the older kids were locked in another epic battle of scrabble, which is a game I have given up because it causes so much strife.

The particular word which was the subject of an ongoing skirmish was Wendy Jo’s attempt to score with the word “gruntle”, which she claimed was the natural positive to the much-abused word “disgruntled”, which is the subject of the tangent on which I will divert once we get through this otherwise efficient report.  Let me just say that the other participants denounced her attempt to score on this word and it was not allowed.


When the tempest subsided, I mentioned to my wife that I had seen Chris, but declined his fishing invite in favor of family time.  Wendy reminded me that the kids were not interested in spending their last day of freedom with their dorky Dad and were all hoping that I would find something else to do.  I nearly gave myself a heart attack running up that trail after Chris to tell him that my kids thought I was a dork, so I was therefore eligible to go, if there was room.  At first he tried to explain that he was just being polite by inviting me, but in the end he said he would get me on board; that his friend Dan was a great skipper and a cool guy; and that it should be totally obvious to me by now that my kids think I am a dork.


We got on the water by the crack of 8 am and loaded up with a great scoop of sardines and mackerel.  Dan took us to a spot ten minutes east from Dana harbor, because that’s the way this coastline works down here.


Dan found marks on the meter and told us to drop.  We had dropper loops set up for deep drifting live bait, but I wanted to yo-yo the ubiquitous Salas blue and white 6X, which I sweetened with squid strips from the San Pedro Bait Company.

I was bit after just a few drops and managed to get my first yellowtail of the season. 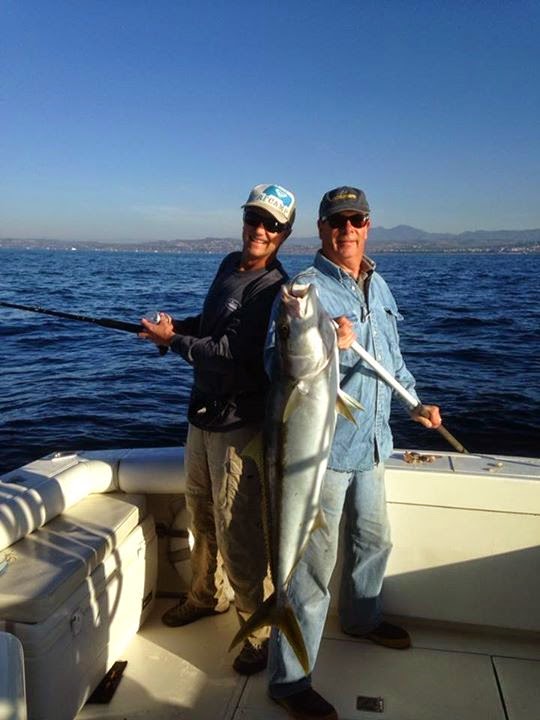 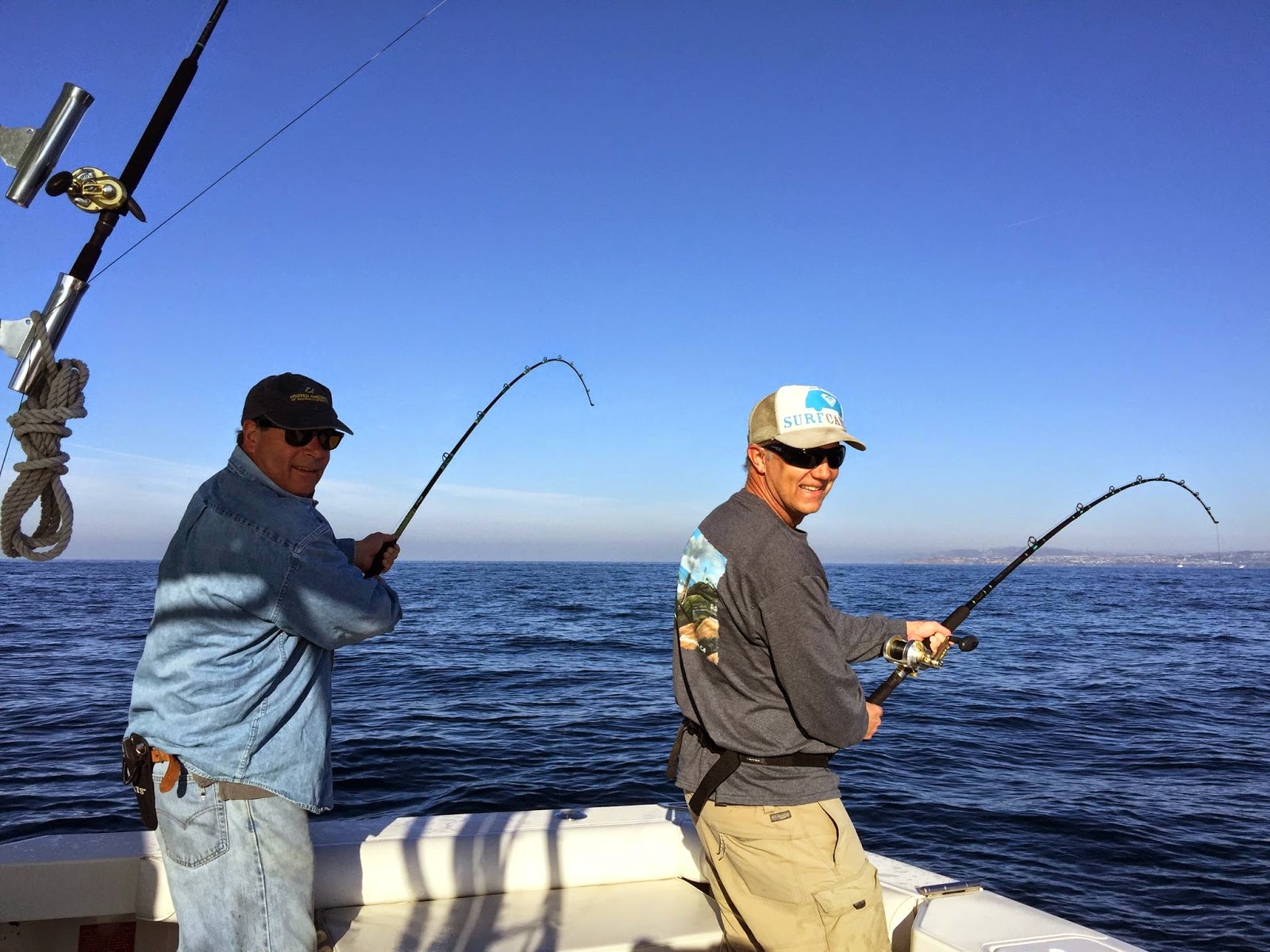 We even managed a double hookup a short time later.

Dan found the fish, as well as gaffing them and cutting them up after they were bled and chilled in the ice brine to preserve sashimi grade quality.


We got three of these quality 20# plus yellows above Cottons in 240 feet of water, all on iron.  We spent the morning in flat seas and 62 degree water.  All three fish were caught near the bottom.  A fourth hit the jig 2/3 of the way up, but I lost that one to a big seal.  We also had the sardines and mackerel out on the dropper loops, but were shown no love for the fin baits.  The bite was on the end of a huge high tide between 8:30 and 9 am.  When we opened them up, those yellows were packed with squid. 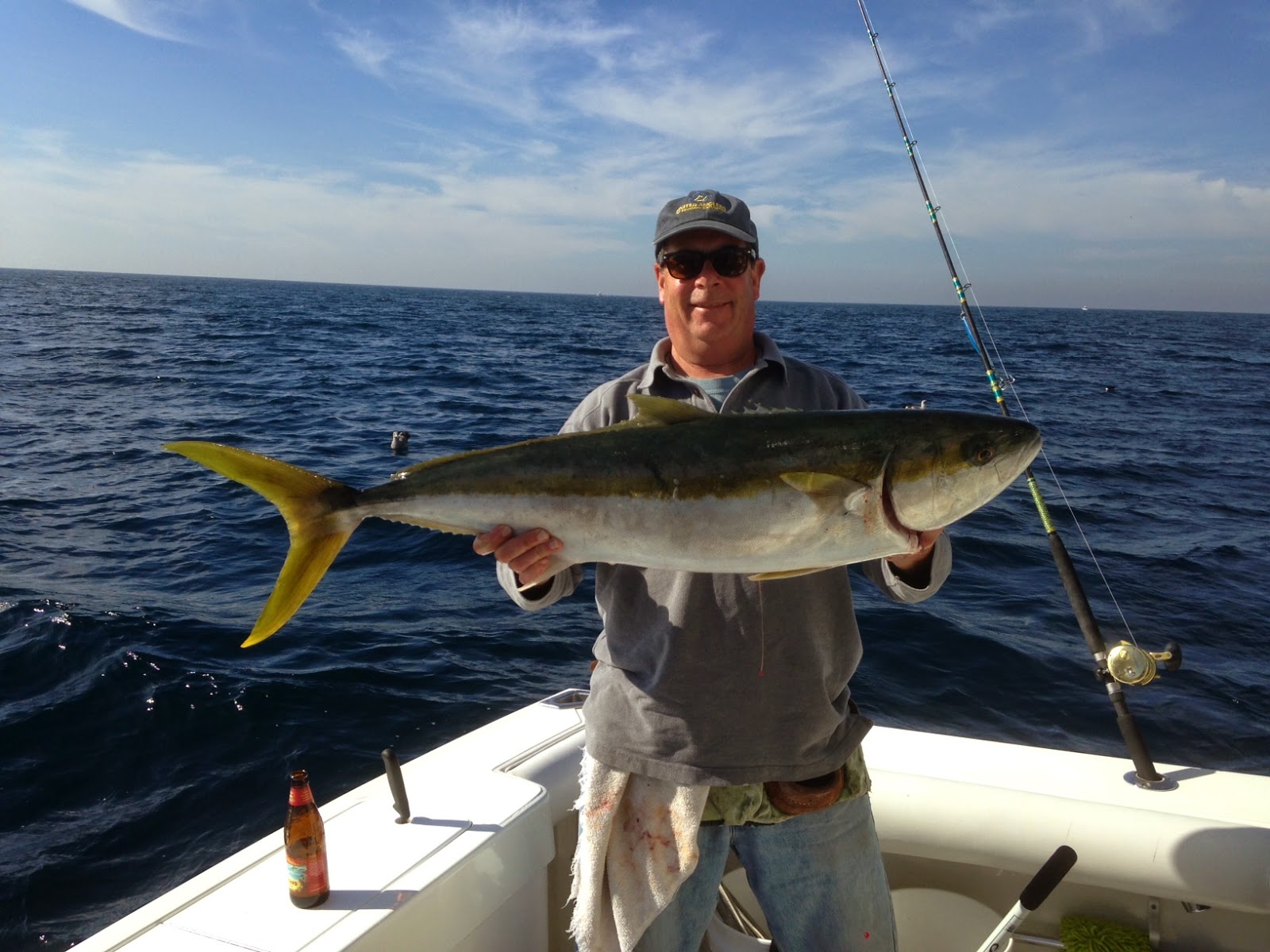 It was a very efficient excursion and an excellent start to a new year that I sure hope carries on where 2014 left off.


Now, back to what I hope will be our media’s New Year’s Resolution to refrain from using the word “disgruntled” as an adjective almost invariably  now slapped on as a obligatory predicate to news about a crazy person who engages in mass murder because of some kind of grudge he might be harboring.  I say "he" because these “disgruntled” mass murderers are always dudes  I hate that word because it has become stupidly swept up as a descriptive explanation for psychopathic homicide like a dropped cell phone spinning around in a toilet.  It still doesn’t  belong in there, even though it keeps coming round.


First of all, “disgruntled” is not an orphan negative.  “Gruntle” is a word.  It means:


“To cause happiness, pleasure, or amusement. It is most often used to denote attempts to cause these to occur in another.”


A secondary definition is more situational:


“when someone has sex with another person wearing a kilt or skirt “;
also a “full gruntle” would be a woman in a skirt/dress and a man in a kilt.


Okay, so Wendy Jo was right and her word should have been scored, but that only illustrates why I hate playing scrabble with my aggressive family.  More importantly, this definition further demonstrates how wrong it is to continually and  lazily plug this word into the opening sentence  of news stories describing mass homicide, especially if it happens in the workplace.


“Today a postal worker who was not interested in causing happiness, pleasure, or amusement  shot and killed 17 co-workers with a belt-fed machine gun he lawfully purchased at a renegade gun store that specializes in selling automatic weapons to people who refuse to have sex while wearing kilts. “


"Disgruntled" is simply not the right word for this job.  Yet, it is persistently applied by news reporters with the same reflexive repetition demonstrated by teenage girls using the word “like” to crutch along virtually any narrative, like linguistic bondo bridging sentence fragments.  It is a verb that has been hijacked  by folks who seem committed to defaulting to this utterance as an adjective to describe lunatics who slaughter people when they get upset about something.


Disgruntled is seldom used correctly, and is almost invariably associated with an act so outrageous that might more properly be seasoned by adjectives such as “deranged”; “crazed”; or, to stay low key, “mentally unstable.”  If you are really lame, just try “angry.” You would at least be correct, if not colorful.


Next time someone goes on a horrifying murderous rampage (and you know it is coming), I would sincerely appreciate it if
our reporters could honor a New Year’s Resolution to reach a little further to find a word that is more accurate and less misleading.


If they cannot do this, then news reporters should have to wear a kilt in state prison and give pleasure to those around them, whether they like it or not.  Perhaps then, they might be able to come up with the right word for how they feel.


Make whatever New Years resolution suits your needs, but being gruntled or disgruntled is more of a specialty than you might think.  My resolution is to continue to fish with cool guys and catch big fish.  So far, so good.

Those yellowtail are not going to catch themselves, so start the New Year by getting out there, because


These are the days.