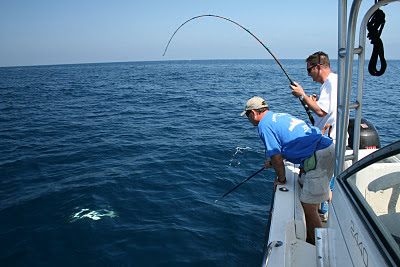 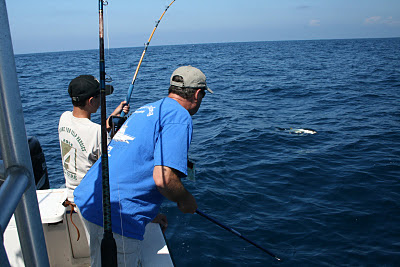 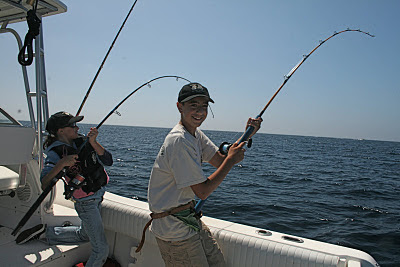 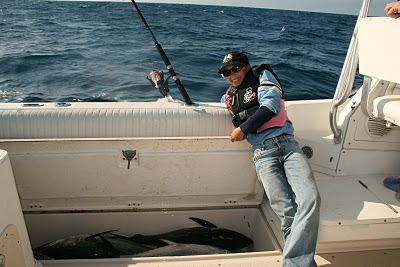 I took three of my kids - Isaac Sarah, and Lizzy, out to spend a few days at Avalon on our 24 foot Robalo - "Fishfinder." On the way out from Dana Point, we trolled for tuna.  We started tracking a big pod of very active dolphin about three miles past the 279 and worked our way slowly to the front right edge of the most densely packed part of the group.  Several times we got in there and got bit by yellowfin tuna on a natural cedar plug behind an in-line chain of purple and black hex-heads. Lizzy also hung a baitfish. The kids got pretty stoked pulling on these fish, which ranged from 24 to 28 pounds. 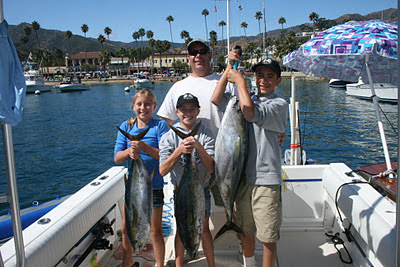 When we pulled into Avalon we were able to side tie with our friends and have plenty of sushi and ahi steaks for everyone.

During our stay in Avalon, we noted a trend with respect to the dazzling built-in light shows that are wired into the stern of some of the fancier vessels.  These light systems are multi-colored and give off a psychedelic show below the water line just off the transoms of these imposing dreadnoughts of the ruling class.

Late at night, after we went ashore in our rubber raft to plunder Olaf's for ice-cream, we paddled out to check out the lights on these behemoths.

As we approached from the stern of an 80 footer, we were able to clearly see the Olympics televised on the big screen the occupants were watching from the salon.

After they got drunk and sleepy, they retired to their staterooms.  We then silently boarded their ship from the swim step and raided their leftovers while we watched the gymnasts and Greco-Roman wrestling on their TV for a couple of hours.  It was very relaxing. We loaded up on ice from their bitchen icemaker before we left to get back to our boat.

We didn't realize that they had a pet monkey on board.  This creature stowed away on our raft as we made our escape.  When we realized that it had joined us, we tried to paddle back to return it, but it started to freak and hopped out.  We lost it in the darkness.  By the time we deployed our flashlights to find it, it was floating face down near marker #225.  There was nothing we could do except to drag his sorry little carcass onto the raft and take it back to our little boat.

The kids were a little upset, but they kept their cool.  We stuffed it into the crushed ice with the tuna, slipped our mooring, and headed back to Dana Point under cover of darkness.

We left Avalon at about 4 am and came across a finning mako at the 14 mile bank just at gray light.  We baited the shark by slow trolling the dead monkey behind a "Mean Joe Green" pattern marlin skirt. The shark hit that primate like a freight train and peeled 200 yards of line before we got the boat turned toward it.  The kids took turns pulling on the rig as we chased our prey southeast.

It was a lively battle, but the shark finally spit the monkey after taking us on a Nantucket sleigh ride and jumping clean out of the water three times.  After the head shaking delivered by that mako, there wasn't much left of the monkey, so we just cut it loose and headed home early.

It just goes to show you that some people have everything - even monkeys on boats.  Well, maybe not now.