Call me Gilligan.......
and I will make this story shorter than I usually do.  No monkeys.  No gunfire.  No dead monkeys.

Your reporter was lucky enough to get an invitation at the last minute from Secret Skipper, whose last mate had deserted him by faking injury.  I paid this gesture forward by leaving work right away, as I had tallied a grand total of one legal lobster for a season I had mostly skipped.  Tommy and David could not join me for this one, as they had made important commitments to education and the swim tournament pool that so relentlessly beckons. 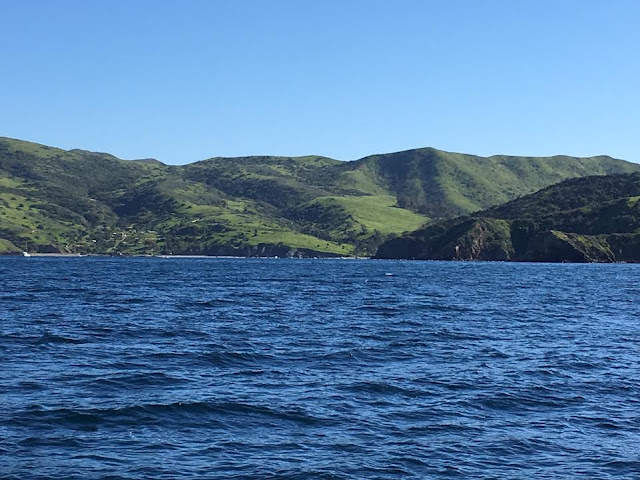 We decided to take a longer voyage and soon found ourselves off the coast of Ireland, where Secret Skipper has discovered a new spot. The island was cloaked in striking green velvet that we rarely get to see. 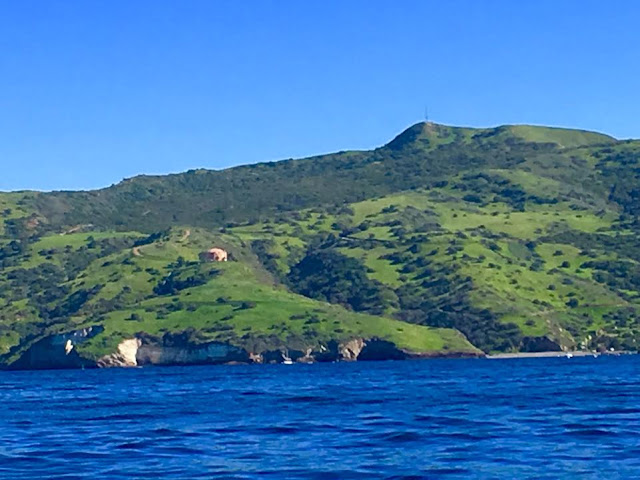 Green velvet lookout near Blue Caverns
We set up in daylight near Beagle Reef and had plenty of time to cast for bass before darkness would allow our quarry to begin their nocturnal crawl.  There were lots of birds crashing and generally milling about.     It turned out they were feeding on small fin fish and clouds of tuna crabs, so the bass demonstrated little detectable interest in our offerings.  The Fish and Game (sorry, Wildlife) catamaran “Thresher” was anchored up close to the shore and was deploying divers.

We baited up with salmon carcasses and dropped in 58 degree water.  Confident of our robot puller, we made our set in water up to the 300 foot depth, where little interaction with divers would be expected.  It was a mostly moonless night and the skies had cleared between storms.  We set out our hoops while it was still daylight so that we could get good bearings on where we were and deal with any problems before darkness enveloped us.  We watched the Thresher leave the island and head back toward Dana, like a fox, as the sun set behind our enchanted island.

Another boatload of lobstermen showed up and greeted us by sewing their own hoops and floats directly into the pattern we had already staked out and after we had suggested the importance of staying out of each other’s gear.  There were few other boats out and things remained cordial despite this breach of etiquette.

The clear skies and the moon’s absence gave us a spectacular opportunity for stargazing while grazing on Kentucky Fried Chicken.  Our bliss was soon interrupted by the realization that the robot had gone on strike as it began making ugly gear grinding noises and ceased its slavish obedience to our instructions.

Big Dave and I took turns hauling on the lines as Skipper brought us relentlessly from one beaconed marker buoy to the next.  The time for each set lengthened due to our reduction to manual labor, so Skipper refused our requests for even one chicken break during this cadence.  The crawl was slow and sometimes we encountered a blizzard of tuna crabs on the way up, so that our nets had  heavy clouds of these annoying crawdads obscuring the emptiness which characterized most of our results.

Soon blinding searchlights bathed us in stark white as a Fish and Game (sorry, Wildlife) inflatable materialized just yards from our stern.  It was manned by the same young warden divers we had seen earlier, before the Thresher doubled back to the lobster grounds under cover of darkness and launched this boarding party.  The wardens were, as usual, on our boat almost as soon as we could say “hello.”  We had all of our papers in order and little to show for our efforts, so we were completely checked out and in compliance.  We chatted them up for a while and referenced their earlier presence during daylight.

They advised that they had been on a routine dive to make sure that divers did not poach in the restricted area and also to make sure that these divers they were actually shadowing in an underwater game of cat and mouse were not taking abalone.  We were surprised by the reference to abalone and we  were advised that these massive shellfish have been making a significant enough come back that they now had to focus efforts on preventing the take of this incredibly tasty mollusk, which had become virtually extinct and completely off limits for most of my life.  We regarded this as good news and said our goodbyes as they headed back toward their stealthy mother ship.

Our toil resumed.  We slowly added some big lobsters to our live tank as the night wore on and conditions got a bit colder.  We kept warm working the ropes, as what luck we had was mostly in the zone between 165 and 200 feet. Virtually all of the keepers we extracted were well beyond measuring size. After 77 pulls, we were physically spent and the calendar had moved to Saturday morning.  We managed six quality specimens per man, which was one short of our limits, but my vote for staying for Limits-or-Death was in the minority.  We rode home on a very smooth sea, cleaned up the boat and tried to beat the sunrise home.

Tommy and David assisted me in the photo documentation, execution and preparation of these tasty creatures. 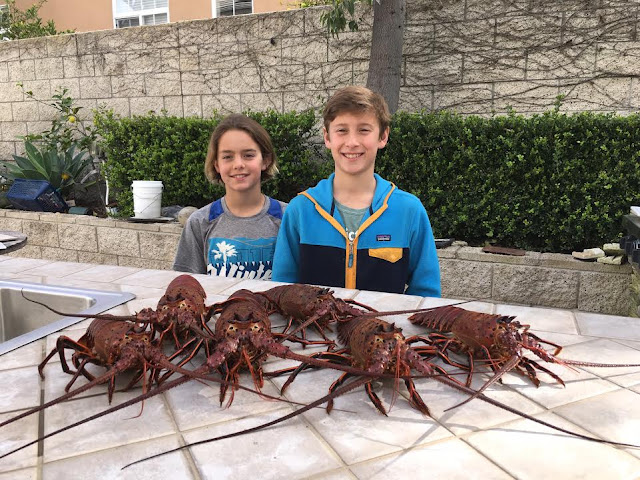 Vegetarian and Carnivore pose with dinner guests
After the wetwork was completed, our longtime pals and next door neighbors, Jeff and Lysa, came over to share an abundant evening of cocktails, surf and turf. 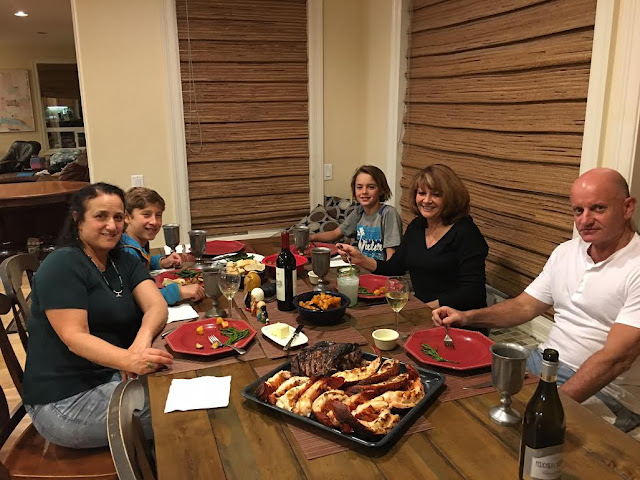 Impatient diners wait for picture time to be over
The season is winding to a close after the weather kept us off the water for most of the winter.  We ate lobster omelets for breakfast and plan on gorging on the rest during the Oscars tonight, so none of those Hollywood stars will have anything on us in terms of what we get to eat this weekend.

It’s good to snatch a few  insects from the sea as spring approaches.  I was greateful to learn that the amount of baloney on the shell in our local offshore world is increasing to the point that maybe our children will be able to harvest a few, if these critters keep up the comeback.

It should be a fantastic spring runoff and a banner year for whitewater rafting and fishing the Sierras, unless the Deity hoses off the snowpack too quickly.  It looks like this weather is going to give us more indoor opportunities. In the meantime there is  reason for optimism about times to come, while never forgetting that 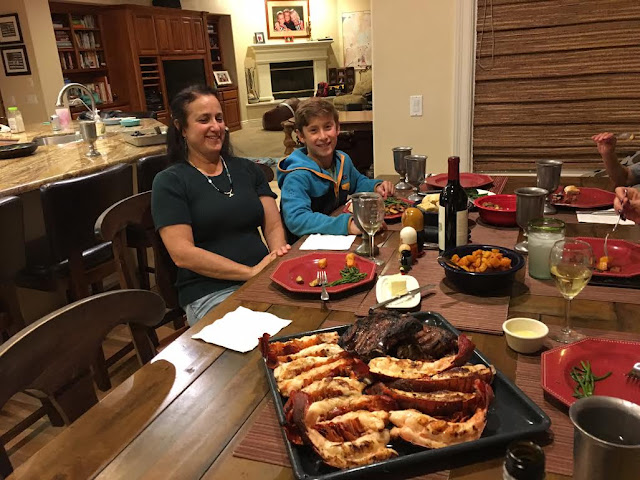