On March 24, 2011, we traveled up to Fort Hunter Liggett in Monterey County for the first annual Tom Dean Memorial Hunt to do some pig shooting at a ranch/lodge run by Native Hunts. I had never done this before, but I was told by the returning members of this group that these critters had it coming after what they had done to some of their friends, so I was glad to join the posse. Our group consisted of Rob, Mark, Dave, Russ, Mike and myself, along with our host-guides from the Native Hunts Outfitters – Sam, Chef Sid, Colby, and Corey. We arrived during a day of heavy rain, which followed several similar days of precipitation. The outfitters had already offered to reschedule our expedition due to the persistent bad weather. Our group voted on it, after taking testimony from a young girl whose tragic story about extortion and family ruin caused by these hogs strengthened our resolve to undergo any hardship to kill as many of these creatures as our gentlemanly breeding and number of tags would allow.

In addition to the Eurasian boars, the Native Hunts properties are also home to exotic sheep and American Bison. I had not spent a sufficient amount of time in the wild part of Monterey County to recognize all of the creatures which are apparently indigenous to this region of abundance. 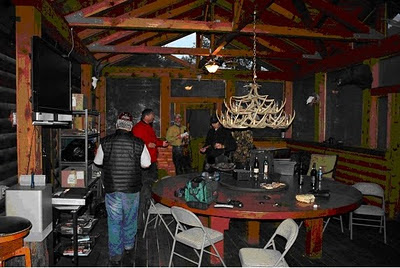 The lodge is comfortable and features an outdoor kitchen. The large screened dining room, which is decorated with the heads of state, is a great place to hang around out of the rain and make ready. 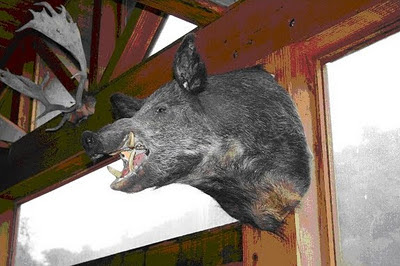 While we met for initial indoctrination with the guides at the lodge, we were introduced to the fire-making skills that make hunting guides like ours such phenomenal men of the wilderness. We felt confident going into the forest, knowing that a blowtorch and a tractor tank of diesel was all we needed to get a campfire started if we had to make do with the resources at hand. 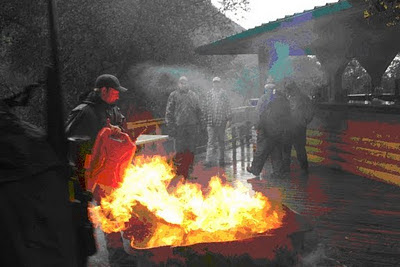 Amazingly, despite our concerns that the weather would make tracking them on foot almost futile, the pigs came out to engage us, with their mounted allies, the Monterey Cypress Monkeys. These boars and primates have evolved into a peculiar symbiosis by which the pig-riding monkeys dismount to climb trees to scout out the ground ahead for food and danger and then re-mount to ride off amidst much chatter and grunting to do their damage to humanity. 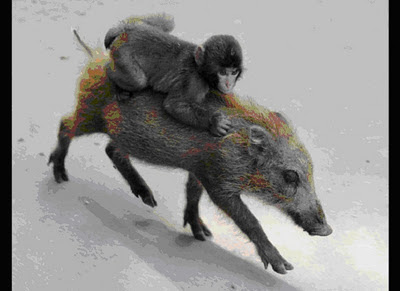 It was when we recognized that these porcine marauders had help from primates that we realized how it was that they were able to drive that little girl’s family from their double wide along the San Antonio river drainage. It was suspected that her parents were crack dealers, but the mobile home was demolished and these crack-loving monkeys never leave a trace of product in their wake.
The pigs had been laying low for several days because of the persistent heavy rains that ended up turning this ranch into a giant boggy pig-pen. The weather was slated to start clearing up the next day, but we had a chance to start our hunt in the enchanting twilight of the Monterey monsoon. 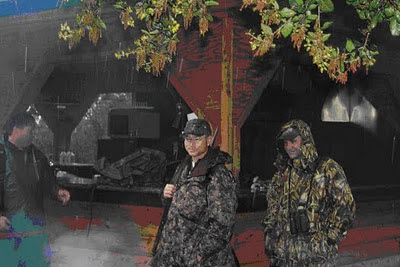 The hunters split off into a couple of groups. Colby and Corey escorted Mark, Rob and I, while Sam and a couple of the other guides took Russ, Dave, and Mike in a different direction. Soon, out guides were using commando-style signals to let us know that monkeys had been spotted in the trees, so the hogs would not be far away. Mark, who is a trained SEAL, can balance a riflescope on his nose while pulling the trigger with his flipper. He is also impervious to pain and so was not bothered by the divot this demonstration left on his face. 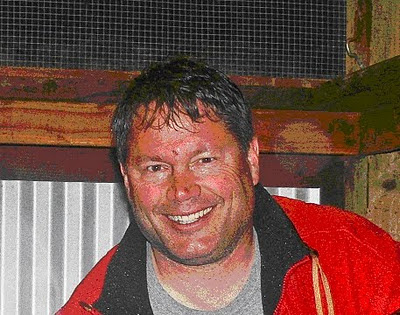 Mark took the first shot, as he was clearly our most skillful hunter. He hit his rider-less pig right behind the ear with a .308. It dropped right on top of a sinister map of homesteader’s cabin it’s departed monkey companion had just drawn in the dirt that became this miniature pony-sized boar’s final resting place.

I was hand-signaled into position by Colby when it became clear that there was another rider-less boar on the loose. These monkeys aren’t stupid. Once they saw we had guns, they left the pigs to escape on their own, leaving the pigs confused and vulnerable to even novice hunters like me. Mine started up a draw to the left, but then abruptly tuned back and ran downhill, giving me enough time to track it in the crosshairs of a .270 I had borrowed from my friend Bill Peterson. Bill had told me not to touch the sights because he had it all dialed in. Bill was right and my bullet went exactly where I hoped it would go, which was right into the heart and lungs of that pig for a shot that killed it faster than you can say “That’ll do pig.”

Meanwhile, on another part of the ranch, Russ, Mike and Dave were stalking a cross-strain of pigs that lived among the exotic sheep. These pigs have developed a peculiar talent for herding and cutting sheep and are invariably drawn to them. When they have herded all of the sheep in a given area into formation, they then stand there, waiting for recognition. Our posse recognized them from great distance across the ridge because of the block formation of the white sheep on the green slope. These shepherd pigs are larger than those ridden by the monkeys, which are sort of like the Arabian horses of the saddle-bred hog world.

Russ picked out a fat, self-satisfied porker standing next to his assembled wooly formation. He wiped the irritatingly smug pig-smile off of that hog’s face with a single shot from his 30/06. His wingman, Mike, encountered a stubborn pig that he thoroughly ventilated with his .270. It demonstrated how well it could stand up to a box of ammo before going into a coma from which it did not emerge. The sheep just stood there in Napoleonic formation, despite the random splashing of Mike’s stray shots mingling with the heavy rain. Mike’s white-hot gun barrel hissed in the rain as he advanced on his perforated prey after clicking his precautionary bayonet onto the lug he had had the good sense to weld on after the last hunt. It proved unnecessary on this occasion.

Unfortunately, when our companions climbed up into the sheep pasture to retrieve their prizes, they realized that the area had been baited. They found numerous discarded Woolite bottles carelessly strewn about the perimeter of the open spot where the pigs had driven their charges. This revelation took some of the magic out of the Deerslayer experience we had been trying to gin up. 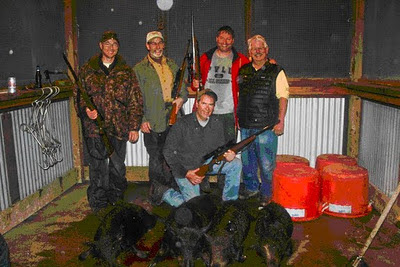 We all enjoyed a pleasant meal and had our pictures taken next to the public enemies we had slain so that we could claim our rewards in town. 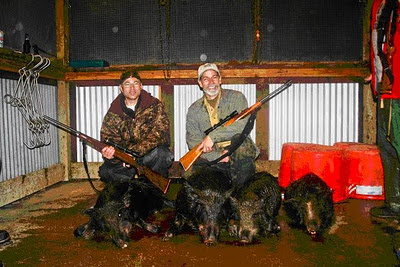 My guide Colby, initiated me into the ranks of those who had successfully discharged a high-powered rifle into a pig by mopping the top of my hat around inside its body cavity during the gutting process and placing it back onto my head, where I kept it proudly displayed for the rest of the trip, including a rather smelly ride home. 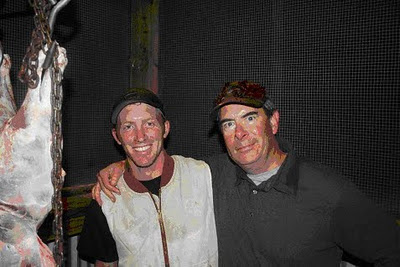 I hung around the cleaning shed to photograph and learn how to take down a hog when I noticed that a local 275 pound Eurasian boar was creeping up right behind me, apparently waiting to get in on eating what was discarded from the members of the pig club that hung inverted from chain hoists over large bloody buckets of what had been removed from them. The omnivorous tendencies of these critters include cannibalizing their own tribe and anything else they can get onto the ground, so it is not good to let them sneak up on you in the dark like that. 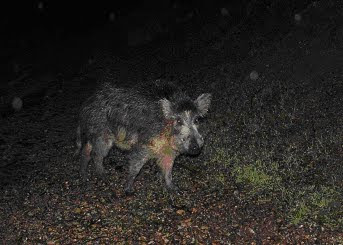 After confronting and photographing this boar, who acted all nonchalant when I wheeled on him about his sneaky approach, I backed away and retired to scotch, cigars and manly pleasantries in the lodge, while the Native Hunts crew finished up the wet-work

The next day the rain was gone and so were the pigs, as our morning foray produced nothing but curious buffalo breaking up sheep formations.

On the way home just below Paso Robles, I picked up a homeless hitchhiker who’s sign claimed he was on his way to San Pedro. He didn’t seem to like my hat very much and asked to be let out on the shoulder of the 101 after just three exits.

We had our local butcher make loads of bratwurst, hot Italian and sweet Italian sausage. We were able to force our neighbors to consume excessive amounts of pork and guarantee that the carnivorous members of our nuclear family fed almost exclusively on the other white meat for a week before returning to our plant-based diet.