This is an e-mail from September of 2005 that I sent my friends after I took two of my kids to Catalina Island to do some bass fishing. It is completely true.


I had promised my kids that I would take them there on this used boat I bought and had been trying to fix up. Wendy really did not want me to go, as there were supposed to be 10 foot waves in the channel and it was just me and two little kids. I promised we would not risk the crossing if the ocean was rough. It was a lot calmer than the forecast once we got out there, so we pushed out to Catalina.


As we approached the island, my kids spotted this thresher shark and kind of put the pressure on me to get it. I didn't want them to think I was a pussy, so the hunt was on. 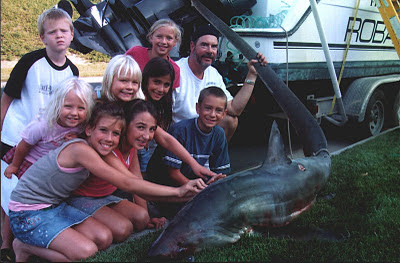 Here is the report:

I took Isaac and Sarah out to Catalina Island on Saturday. We caught a thresher shark utilizing unconventional methods. Sarah, who just turned nine, spotted it about three miles short of the island and we chased it around and tried to bait it for a long time. We got right in its path with slow trolled and casted sardines, but could not get it to go. It finally disappeared and I wanted to head into the island to fish for the smaller stuff. The bass and bonito had been biting pretty well and there had been some limited yellowtail action.

There had been reports of marlin and we had all the marlin gear on board, but my crew consisted of two 60 pound kids.
Isaac and Sarah did not want to give up on the shark once they had seen us get close. They were yelling to keep looking and stay out in the deep water. The kids kept glassing the water from the bow and spotted it again. We were able to creep up pretty close and it stayed near the surface. I told Sarah to stay on the bow and keep it in sight and point the direction that it took. I told Isaac to take the wheel and get me close.

We pulled back up on it and I got the steel into it behind the dorsal long enough for me to grab its tail. We then became fully engaged. I hung on for twenty to thirty minutes while it thrashed around and the kids passed me a rope that I eventually managed to get tied around its tail and cleat it off while it beat the crap out of me with its tail. At one point it almost pulled me over the side, but I refused to let go because my kids were watching and I was getting worked up. It broke my sunglasses off my face and gave me a little cut above my left eye. Normally, I have another adult and a gun on board.

This time, I had neither, but we managed to kill it anyway. They hoisted it up on the crane at the fuel dock in Dana Harbor and weighed it with my two little kids standing in front of it with a fishing pole. I didn't let on that we had murdered it by chasing it down and seizing it out of the water, as I suddenly became concerned about the implications of child endangerment and potential questions about my parental judgment.

It weighed 144 lbs. We took it home draped across the back of our trailer boat. The kids in the neighborhood followedn us up the street on their BMX bikes while letting out war whoops. We had a big barbecue with about thirty of our neighbors and passed out bags of fillets to local pedestrians (including all the kids in our neighborhood).

The adults came by the house to have pre-barbeque cocktails and witness the spectacle of me butchering this beast on the front lawn with a samurai sword, with my arms covered to the shoulders in gore, bloody cocktail glass in hand. I think that it is a good thing to show excellent hospitality to your neighbors by feeding them what you have freshly killed, yet still have them a little nervous about what you might be capable of doing.

I was so beat up from hanging on to that shark that I couldn't straighten up on Monday and had to stay home from work, so I guess I am not staying in good enough shape to rebound from this kind of predatory conduct. The kids had a pretty good story to tell their friends and I had a colorful excuse to explain why I was crabbing around like a 90 year old geezer.

The new ones are so cool. They are seven months old. David is actively crawling around like a puppy. Tommy can only move backwards, but he is going to make a break for it any day now. Our house has so many baby-proof gates in it that I feel like we should be speaking German.

My kids are extremely gentle, but they expect action when they know it's time to kill. One has to lead by example.
Fall is here, so I guess it almost time to stow the rods and rack the slide.