Isaac, Sarah and I went fishing on Saturday on board Larry Marks' 25 foot Parker "Legal Limit"  at Catalina on Saturday. Our boat was in for repairs and Larry generously offered to take us all out to inaugurate the season.  I woke Sarah up at 2 am so we could get to Larry's slip in San Pedro for a 4 am departure.  She wanted to go back to sleep but I made her endure five minutes of pain to get down to the truck and go back to sleep. Isaac slept through his alarm, but was up like a fireman in his fishing clothes within seconds of being awakened. We pulled out from Cabrillo Marina a little after 4.  The ride over was flat calm.
We got squid from the Long Beach Carnage at the east end of Catalina.  We proceeded to the backside and set up at the squid grounds outside of the Vees in about 120 feet of water.  Temperature was 60 degrees, with darkness giving way to cloudy gray .  The current was light.  Sarah was using her custom wrapped spinning rod that she inherited from her great grandmother (I wrapped it for her in her lucky colors that she picked out);  an Okuma spinning reel filled with fresh 15# line, and a squid she spent a great deal of time selecting to use as bait.
She hooked up into a screaming run and this yellowtail immediately pulled her rod down into the water to the lowest guide and ran underneath the boat.  She hung on and pumped it up over the next thirty five minutes, including getting wrapped around the anchor line twice during that timeframe .We guessed right and managed to unwrap it both times at the bow pulpit.  It was spent when she brought it to gaff.  I think Sarah was as well. 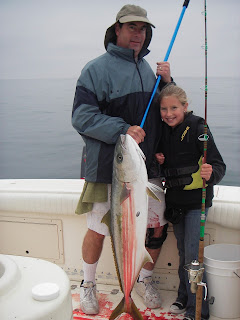 It was not the first yellowtail that Sarah has caught by herself on this outfit, but it is the largest so far.  It weighed 30.1 pounds on a digital scale.  I have never caught one that big.  Our thanks to Larry for showing us such a great time and gaffing this memorable fish.  Sarah also caught the biggest bass later in the day.
I  took Isaac out two days earlier (Sarah was sick) and we went night  fishing for giant squid.  He caught one that was just short of five feet long.  We had a Memorial Day BBQ and fed 48 people on what my kids killed.  The season has officially begun for us.
These are the days.
at 10:38 PM