On Saturday, I heard that the squid had moved in so I called Dana Wharf sportfishing. They told me that they were running their first trip of the year that night, so I headed down there to get on the Clemente, which left at 5:30 pm.

It was the last of three or four days of decent weather before the storm system of the week was scheduled to take root on Sunday. None of my kids could go because they were facing finals and had run out of study time. It was Tommy and Davey’s pirate birthday party the next day, so it seemed appropriate to go out and get this strange bounty of the sea for the celebration.

As I was waiting I ran into a bunch of guys from Iowa who were out for a convention and just happened to decide to check out the local fishing scene for the end of January, which has mostly been a Spartan affair. These guys had certainly picked up the right night for a bit of exotica.

We had about 35 anglers as we pushed out to the canyon in front of the headlands. Skipper Cory had us drop our squid jigs in 200 fathoms (about 1200 feet) of water, when he metered squid about 2/3 of the way down. We watched a full moon rise in the east behind the boat as we worked the first drop to more that 100 fathoms.

I hooked up, along with a few other guys with lots of line. I was fishing a Torsa 20 with about 40 yards of 40# mono spliced into 80 pound spectra. I hooked that first squid at over 600 feet and it was chore to bring it in. The Torsa was more than a match for the cephalopod, but everyone had to set their drags so you wouldn’t pull the pins out of the tentacles as you pumped the rod and reeled down.

The squid were running about 18 to 30 pounds, from what I saw, and a bite that started really deep at around 6:15 pm started getting shallower and more intense as the squid rose, sunk out and then started coming up in earnest on our third drift through the canyon. By 7:15 it was pretty wide open and the squid had moved up into the top 50 to 100 feet. There were a few free swimmers that would come up into the lights to take bait just below the surface and most people were getting stopped on the way down during the last hour. It was all you wanted. We were done fishing, with all of the rods racked and the cleaning board out by 8:15. The crew worked furiously to clean the squid so that we could slowly motor in and end up tied up and offloading anglers at 9:45.

This is a great way to pull on some really big and fascinating creatures that are quite tasty when prepared properly. I recommend at least 30-pound line and a few extra squid jigs and weights.  A great trick is to tie about 2 feet of mono below the bottom ring on your squid jig and attach a 4 ounce torpedo weight. When you get your squid aboard, you don’t have to reach into that mass of angry tentacles to retrieve your jig from its maw. You just pick up the torpedo weight and it backs the pins right out of the squid from a safe distance. The squid stays on the deck and you can drop the rig right back down.

As far as eating these things, they are great, but you need to cut the membrane off of both sides, cut them into squares about half the size of a playing card, and then pound them until they are twice that size, but much flatter. Then I recommend breading and deep frying in oil for about two minutes, or until golden brown. They are great dipped in marinara sauce and are an excellent entrée or cocktail appetizer.

Nick, one of guys from Iowa with whom I hung out, snapped this picture of me with one of the four squid I took home. I would say that this one was fairly typical of what we caught that evening: 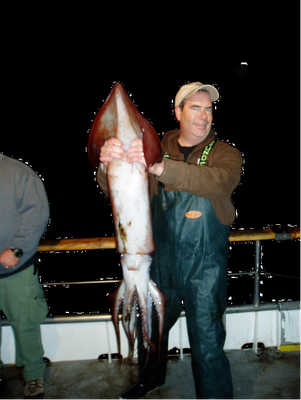 I had the crew clean them, but I smuggled one whole one off the boat in a double-wrapped trash bag I brought on board so I could bring it back and show this sea monster to my five year old birthday boys. Normally, you are required to have the crew cut up and bag your squid so that the local authorities are not left to clean up the massive ink and slime trails that lead up the ramp in into the parking lot. Lots of folks with 100 pound gunny sacks full of inky squid will dump them in the parking lot when they realize they don’t want too put them in their car, so it is now illegal to take them off the boat unless they have been cut and bagged by the crew.

On the way home, I had an encounter with a group of young (younger than me, anyway) intoxicated males. They were in a metallic green Fury III with no hubcaps. There were three guys in their twenties in the back and a pretty big guy, who seemed to be their loudmouthed leader, in the passenger seat. I was minding my own business at a stoplight, singing along with the Beat Farmers with my windows rolled up, when I became aware that I was being yelled at. I looked down from the SUV I was driving to see this bearded guy with greasy, shoulder length hair yelling at me and giving me the finger. I rolled down my window and he called me “faggot” and spit on my door in a failed effort to get more elevation on his expectoration. I thought I was hallucinating as I took him in. This dude was in a massive, dirty double-cast which apparently supported two broken arms with pipe-like supports. His arms were locked out at the elbow – almost like he was extended towards an imaginary steering wheel on the passenger side. The other guys were laughing hysterically at his clever insult and partially successful attempt to spit. I think that they had some open beers going in the back seat. I just couldn’t find a way to be scared and the evening seemed too young to let this scene just slip by. Besides, I had my can of bear spray under the seat, so I was kind of hoping for a little escalation.

The guy in the cast was also smoking a cigarette. He was using one of those telescoping roach clips with a Marlboro light pinched down in an alligator clip at the end. He kept flashing this wand back for puffs in between shouting smoke filled, slobbering insults as we cruised north on Pacific Coast highway. This seemed funny to me and I started laughing. This pissed him off and he started yelling that they were going to kick my ass. I asked him if his friends had to take turns wiping his butt.

He actually looked big enough to kick my ass, even with that comical cast rig, but the threat just somehow didn’t seem very real. Because of this, I didn’t turn right to go home to San Juan, but continued to head north as my pursuers baited me. As I was driving along, I was fumbling back with my right hand to get the double trash bag on the floor of the back seat open. I managed to do so just as the Fury pulled even with me and I was about to make a right turn where the highway passes the road to the Ritz Carlton. I had to momentarily let go of the wheel and steer with my knees in order to hoist my prize cephalopod in one continuous motion out of my window and onto the rigidly outstretched arms of my tormentor in the adjacent lane as they accelerated to pull even with me. I just had a momentary glimpse of the beginning of a surprised look on their snowman-like spokesperson as I swerved into a right turn.

I just don’t think it is possible to be adequately prepared to receive such a sudden and abundant delivery of fresh seafood while drinking and chasing someone in a car at 10 pm on a Saturday night. I looked up into my rear-view mirror and saw them slide to the left across the intersection amidst much horn-honking as they beached the front axle on the left turn island. I never got a chance to use the bear-spray, which I still have left over from a fly-fishing trip to Canada. I also didn’t get to show my little guys that whole squid, so they will have to do with the picture. We cooked up a mess of squid for the party and washed it down with pirate punch and a little splash of the Captain for the adult members of our crew.

I suppose that some people may think it was uncool to throw a five-foot long squid on an unsuspecting drunk with two broken arms. Maybe I was not in a charitable mood when we met, but I felt better after I shared my catch with these thirsty motorists.

Hey, at least I don’t have to depend on the kindness of others to get MY butt wiped….for now.