Squid Trip Out Of Dana Point 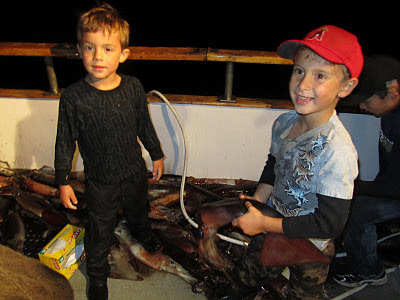 Just have time for a short one. No tuna for me this year, but I heard that the squid had moved into local waters on Thursday and were so abundant that they were even getting them in the daylight, instead of the usual night time only bite.
I called Dana Wharf sportfishing and with the help of Sheri at Dana Wharf sportfishing, hastily put together a trip with some other dudes, dads and kids on the charter boat San Mateo for Saturday night. We left at 5:30 pm and were back by 10:15 pm.
It was a very calm evening, with just a bit of a sprinkle before sunset and hardly any wind or swell. The squid stayed down deep for a while, but eventually came up to where it was a wide open surface bite at the end of the evening. We caught over a hundred and the kids had a blast
Captain Chad and his dad Bob did a great job with all of the kids and worked hard to make it a memorable experience. This boat has a capacity of 15 people and we had plenty of room with the seven adults and seven kids who made the trip. My own twin six-year olds, Tommy and Davey, whose pictures I have attached, had never been on a sportboat before, let alone going out on a night raid in pursuit of these remarkable creatures. The night was dark and the heavy red tide produced an incredible luminescence in the water that made the experience even more surreal, especially on the ride back in to the harbor.
The ones we caught were a smaller grade than last year - mostly 3 to 10 pounds instead of the 20 to 40 pounders that blew in for a few days in 2010. These models are the perfect size for eating and don't require marlin gear like the big ones, so the kids can pull on them with a little help from the parents. They also are just as good frozen as they are fresh. The key is pounding them just like you do abalone - for those few who remember what abalone is.
These mysterious cephalopods sometimes stick around, which is probably bad for the local fishery, as they are quite voracious in consuming everything in their path. Most often, though, they quickly vanish, as they did the day after we got them. They are the Keyser Sozes of marine annihilation- "And like that.....they're gone." 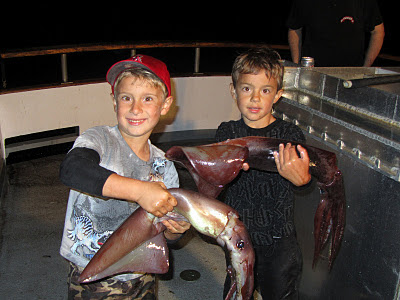 We will be feasting on what we have slain and remain prepared to take these invaders down if they threaten our coast again.
These are the days.
at 3:12 PM 0 comments