Came home from work early on Friday as the fires raged in the warm air at  Camp Pendleton.   Isaac and I decided to cool off by launching the Finder, throwing some jigs and catching the sunset off  Monarch Beach.   Conditions were glassy, the air was stifling and sea temp was 64 plus.  There was no current in deep water so we crowded the beach.  The fish were biting in shallow water and this calico bit a white Gulp jig in the kelp not far from the surf line.  The smoke on the water made for a bloody red sunset.. We kept that bass in the bait tank and turned him loose in front of the Wind and Sea, where we then joined our friends for beverages after we got tied up. 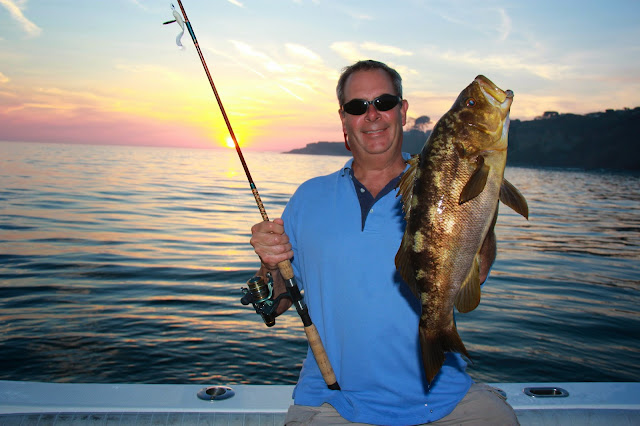 It was not until I was surfing the internet the next day that I realized that the entire animal warfare sector of Pendleton had been consumed in the blaze and many had escaped or been turned loose.  It was reported that there were over 250 rhesus monkeys scampering into the surf at Las Pulgas Friday night.    They swam  through incoming grunion toward the bright lights of the commercial squid boats, just as their marine training dictated.  Instead of boarding the vessels and seizing control, however,  they were sucked into the giant squid intake hoses, blown into the flash freezer and processed into vacuum sealed food saver bags.


I was told by a  telephone sales representative from the San Pedro Bait company that for a limited time, if I bought  the ten pound block of fresh frozen squid , not only would I be getting the best frozen squid on the market today, but  I had also a real shot at  getting a bonus monkey.  I  was so stoked by this sales pitch that I bought five 10 pound squid blocks and thawed them out in the backyard right before Wendy's family came over for a cookout the next afternoon.   All five were straight squid with no monkeys, so that was disappointing.  We ended up just getting pizza.
Later, I heard that the squid company actually froze the monkeys separately and donated them to a homeless shelter.  I guess since I know now that it was for a good cause, I shouldn't feel so ripped off.  Still,  serving something so high on the chain to folks who are mostly a bunch of winos seemed wasteful in comparison to the more educated palates of those who appreciate  the rare delicacy of consuming something  with such proximity to us on the evolutionary chart.  I just wish I hadn't thawed out all that squid in the yard on such a hot afternoon and promised everyone a barbecued primate dining experience that I could not deliver.


I may not have any flash frozen monkeys for honored dinner guests to kick off what sure feels like the start of the summer, but in the year since my last report I have been rejoined by my right eye, so I feel pretty lucky. The season is upon us, so its time to get out there again,


These are the Days