Larry, Dennis and I went to Catalina on Larry’s new Parker 28 on Saturday afternoon to try and hoop up some lobster before the storm came in.  It was a smooth ride out and we were at the island by the low tide at 4:22 pm.  We baited Promar Ambush, Eclipse, and Danielson nets and had them in for a soak by 5 pm before a 5:22 sunset on a moonless evening.  The standard 100-foot lines were all set in 75 to 90 feet and we had three long lines down between 100 and 150.  Water temperature was 59.8, the wind waves were down to nothing, and air temperature was warmer than we expected.
We lost a weighted, small-float, deep-rigged Ambush to a combination of seal joyriding or tidal movement right off the bat. We spent some time in a futile  effort to snag the gear with a jig that broke off when we momentarily had it close to the boat in deep water beyond a steep shelf.  This adventure made for a long initial soak when we picked up the remaining set of nine after 7 pm.
This was my first opportunity to use Larry’s auto-puller, which is the third generation of a design that Larry has been testing.  It is called the Bagram, after its inventor-builder.
It consists of a pipe-framed arm which extends a suspended pulley through which you pull the line before feeding it around another shaft-mounted wheel and then looping back up to take in the line from the top of a powered fly-wheel.  The large sliding floats are rigged to leave slack in the counter-weighted tag end of the line.  By pulling the float back to the weighted end, you can feed that length of slack through the wheels before hitting the power switch.  This allows you to start the ascent without yanking around the mainline first and spooking the bugs.  At first, this notion about slack turned out to be more theoretical for me than intended, but I got better.  The swift tidal current defeated some of our program by pulling the float to the lead counterweights on the tag end of the line past the sliding float
The heaviest movement of the tide hit about 6:30 pm, which was when it started actually getting dark.  We pulled 7 legals out of the first set as the tide began running hard.  We also pulled 30 shorts. Three of the hoops had 7 or more in them as they came over the side.  We sent the hoops right back down as soon as we got them emptied out, not realizing that the tide was now running much faster than when we had placed them at slack tide.
We hit the set again when we noticed that several of the floats weren’t sailing correctly and seemed to be migrating.  Several of the hoops were not in contact with the bottom as the buoys drifted. The situation was compounded by seals grabbing the small float above the hoop.  They would drag the net out as they tried to get at the bait.  We had one bait cage get pulled off, but we had a half-size spare cage.  The upshot is that until we figured out the situation, we made a couple of sets that resulted in chasing down mostly empty nets during the big tide movement.
Until high tide at 10:45 pm, we had a very slow four hours during which we pulled in one more legal and 20 more shorts.  Shortly after the high tide slack, we dropped a longer soaking set at 55 to 75 feet, with the two deep rigs in about 115 feet.  We started getting a few more to keep us stoked on making more drops until we made a couple of final sets that cashed in on a post midnight crawl.  We had 17 legals before we pulled up our last set after 2 am for two more.  We were too beat to hang out for any more sets and figured 19 was enough.  The size ranged from barely legal to four pounds.  We had six nice ones that all looked over three. We caught well over 50 shorts. There was no obvious advantage demonstrated in favor of  Eclipse, Ambush, or Danielson rigs on this trip.
Larry’s twin 250 four strokers got us home in about 35 minutes on a calm and clear ride back to San Pedro.
I got home at 5:30 am with six live lobsters (one short of a limit) in the ice chest.  I showered and fell into bed ten minutes later. When she woke me up at 7:30am, Wendy Jo suggested that I was a pussy for not toughing it out long enough to bag that seventh lobster, but we invited our neighbors over for surf and turf anyway. 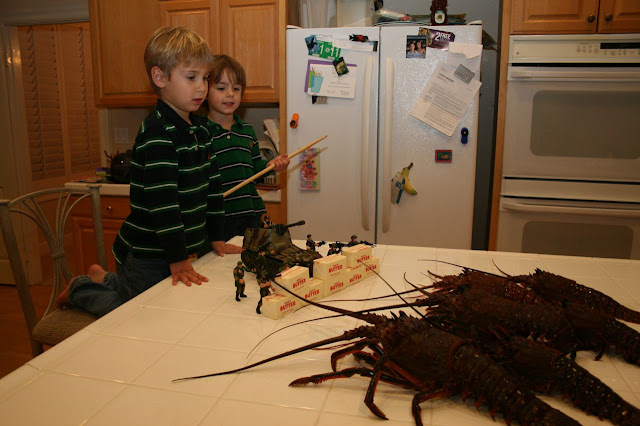 The kids always like to see the live ones, but Tommy and Davey grew concerned that we weren’t doing enough to protect their totally fearless G. I. Joes, who deployed onshore to bring guns and butter to these uncivilized invaders. 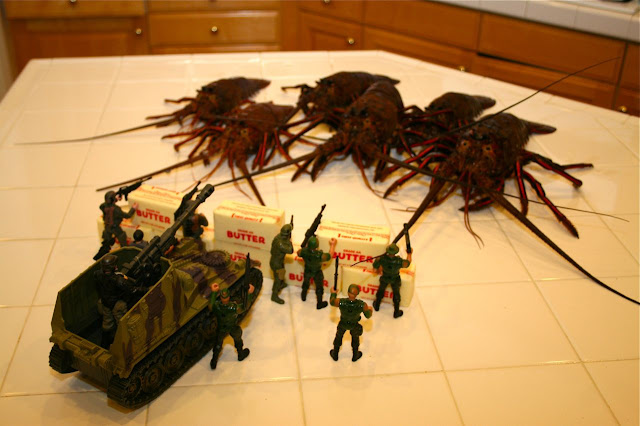 Isaac gave them even more cause for alarm when he threatened to air drop a couple of the biggest roaches behind our lines.  The boys asked us to pull their guys. 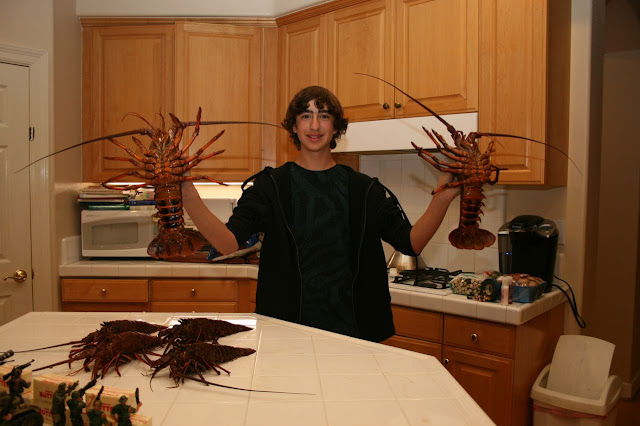 Fortunately, our brave fighting men were victorious.  They joined with us to celebrate their conquest and our consumption of the enemy. 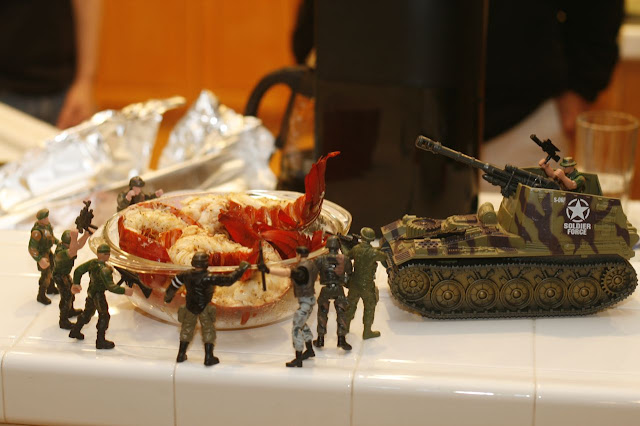