This report really starts with the last Saturday in May, when Kevin Sage and I took the Fish Finder out in the early morning to try and coax up some local white sea bass.  The weather forecast was for a 7 to 10 foot south swell and westerly winds building to 25 knots.  After we turned the corner to the west after loading up a scoop of really nice anchovies mixed with a few dines from Everingham’s in Dana, we found ourselves in offshore wind conditions that pushed us up toward Laguna. Big south sets rolled into the beach with the spray blowing back off the breakers as the surfers got stoked.  With the forecast for a big wind change, we decided to stay close and cheat toward the west, rather than heading down toward Cottons.
We bounce-balled in 50 to 70 feet of 63 degree water outside the kelp at Dana Strand and Salt Creek Beaches for nada with squid and sardines. No one seemed to be doing any good and the current ran from stern to bow for the boats trying to anchor up.
Eventually, the wind started to blow in the opposite direction and steadily gained force.  We were then able to anchor up with the stern into the kelp in about 50 feet of water in front of the Ritz.  We caught bass and mackerel deep in the kelp before I hung a legal halibut on a split-shotted anchovy on a wire hook tied into a 30 inch shot of 20 pound fluorocarbon over 30 pound spectra.  The fish went about 9 pounds and was a pleasant surprise on a pretty slow day.
We thought the tide might be turning for us when one of our whole squid on the bottom screamed line off the reel.  We had the perfect kelp-cutter rig and I felt like I was doing a great job of sawing it free, stalk by stalk, from where it had burrowed into the forest. As soon as I allowed myself to think that it might be the WSB we were targeting, or the mother of the halibut we had boated, it revealed itself as just a thirty-pound Batman that pulled like a tractor.  We gave it an honest effort past noon and got off the water as conditions deteriorated from the west.
We all had halibut for dinner that night, as well as the following day, when the wind blew 30 out of the northwest and closed the ocean off to everybody.

On Friday, June 4th, I joined the Sage brothers, Kim and Kevin, along with their buddy Ed Sidelinger in San Diego.  We took the Sages 36 foot Egg Harbor, Fiji Girl, to fish the Southwestern Yacht Club halibut tournament the following day.   We had great conditions, a beautiful tank full of big, seasoned sardines from Everingham Brothers and 64 degree water as we headed out to South Coronado Island.  We caught some junk that night in clear water that was most noticeable for the complete absence of current.  It was easy to hold straight up and down with ½ and ounce of lead, with a bounce ball rig behaving like an anchor.  When the current changed (slightly), Ed hooked and landed a nice 8-10 pound halibut on light gear and we thought the bite was on.  It wasn’t.  That was the only one we got.  We spent the rest of the morning drifting different beaches at the islands and middle grounds before slow-trolling some mackerel where the yellows had been popping up and sinking out below the birds.  We got one short bite and that was it.
When we got in for the weigh-in, it became clear the real action was off Imperial Beach in 40 feet of dirty water where it mingled with a red tide at the river mouth.  The ticket was fishing big ‘dines and mackerel just off the bottom.  Many guys had several legal halibut. The winner weighed 18 pounds.  There were even a couple of brute yellowtail (32 and 34 pounds) that bit the halibut rigs.  That bite went on for over a week and may still be happening as I type this.

On June 10, Isaac and I joined Larry Marks on board his 28 foot Parker, Legal Limit, to head out in big seas and strong winds to fish Catalina.  Prepared for the worst, we had a pretty uneventful channel crossing against a westerly wind and swell.  After picking up a sparse 50-piece scoop of live squid (despite a 20 buck tip) from the Carnage off Avalon, we set up around 6 pm at the Palisades in about 80 feet of water over some pretty good marks.  There were a couple of light boats and small private boaters to the east of us in the 64 degree water.  As the evening wore on, the area between the Vees to the east and a bit to the west of us filled in with arriving sea bass fishermen.  The current ran uphill, but not that hard.  There was a lot of bait in the water as the squid boats lit up the island.  We had no boats inside of us.  The bite did not happen for any one we were aware of as we fished multiple rods with short flouro top shots over Spectra tied off to white jigs, lead-heads, sliders and dropper loops.  Isaac was able to hit the hay, while Larry and I fished hard all night, getting only pecking perch, mackerel and a bat-ray that got us excited for a few moments before giving us some tangles with which to busy ourselves as the darkness dragged on.
At 4 am, the wind, which had been blowing out of the west in a traditional way, changed abruptly and started blowing us to the west.  All of the boats swung completely around.  The wind was noticeably colder. At about 4:30 am, I got slammed on my newly wrapped 8 ½ foot Pacific Bay graphite stick while bouncing a white Christy 2, which I had sweetened with two squid. The fish came to the boat after a few head-shakes and short runs.  Larry laid a perfect head shot with the gaff as we got a nice halibut over the rail and into the fish box about a minute before it went Berzerko and tried to break out of its fiberglass mausoleum.  The noise woke Isaac up, and he joined us on the deck. We thought maybe the tide and current might fire up the bite, but as gray light gave way to daytime, more boats fired up their motors and decided to look elsewhere. We did too.
We worked our way up west, fishing various spot where we thought we might scare up a yellowtail.  The southeast wind picked up and the current really did not get going.  We threw every kind of bait that we were able to make – big sardines, Spanish mackerel, greenback mackerel and squid, as well as jigs and slugs, but it was slow going.  We slid on a bird pile outside of West Cove and I got stopped on a deep cranked Salas 6x Jr. I fired toward breaking bait.  It turned out to be a horse mackerel.
We finished up the day catching calico bass on the front side, with the most productive spot being near the Red 2 buoy at the Isthmus.  By the end of the day, we were all pretty tired.  I was also pretty sick of fishing spectra with such a short topshot of mono.
The ride back was kind of sloppy/lumpy as the wind blew harder and crossed up with the west swell. We were back by 4 pm on a trip that lasted about 24 hours.  I did not get the impression that others had much better luck than we did on Saturday. 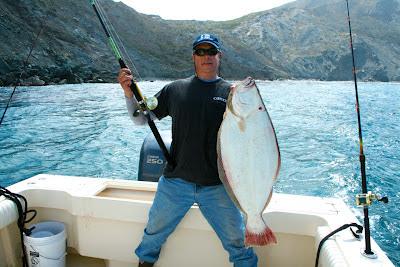 Here is a picture of the halibut.  It taped out at 37 inches and weighed 20.7 pounds on Larry’s digital scale. The green water has produced halibut on each trip so far this season. When I got in, I heard that the bluefin and albacore are starting to bite down south, so I am looking forward to spooling more mono onto my reels and heading for blue water.