Bugging, Birding and Riding Out The First Tsunami of 2022

On January 14 your reporter once again joined Secret Skipper at Catalina.  We thought we would have the lobster grounds to ourselves in the event a volcano erupted and sent a tidal wave to the west coast.   Skipper told me that was one thing he was sure we could count on.

The weather forecast was much more negative than the actual conditions.   Once again, we could not book passage for Tommy or David  because of the urgency of aquatic drill and those irritating high school classes on Friday afternoon.  The moon was full and up early, while the  low tide left us with a steep ramp on departure. We picked up some sardines from San Pedro Bait to go with the fresh salmon carcasses Skipper procured and headed toward the water rushing at us from Tonga.

Skipper's machine had just been serviced like the Tin Man in Oz, so we had some giddyup in our step as we boomed over to the wintery green of our romantic island  at 32 mph.

The sky was gentle and the ocean glassed over as we made our set. 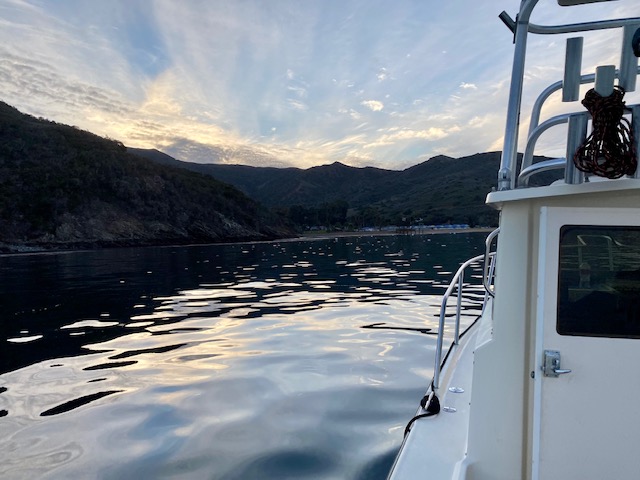 If December brought us the best combination of size and abundance of any trip in decades of chasing bugs, January 14 brought us the easiest night of hauling gear we have ever had.  In December, we had ferocious current and pegged floats to go with a monster crawl.  On this occasion, there was a frightening absence of current that left the counterweighted line in motionless verticality. It was so easy to just drift over to the float and get the line onto the wheel as we luxuriated in all the slack that was so easy to retrieve and coil.

We had a hard zero in the first 300 footer that we pulled in what was not yet night and had concerns about the lack of current. We pulled out three good ones from a squad of five in the next hoop and the crawl was on.  We had 9 legals in the first six hoops.  We were sure that we were going to hit our limit of 14 in one set when we got to the shallow hoops for which we had so much expectation.

As it turned out, we were a little overconfident, as the last 4 hoops only gave us one real good one.

We headed out into the second set in a rapid rotation that left little time for a productive re-soak.  The first few we pulled were empty.  We took a sandwich break to give them a chance to crawl toward our baskets like the Easter Rabbit's Parade.  That little pause did the trick and the next few started producing again. 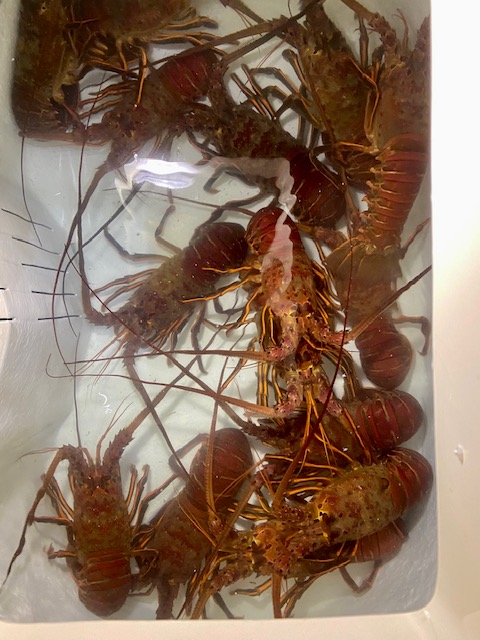 We had a two-man limit in 18 pullls.  It was barely night time as we hauled gear, dumped bait,  heaved back quality bugs and happily stowed and stacked for a ridiculously smooth ride back.  Clean-up was a breeze in our relative freshness.  The high tide of our early return gave us a very gently sloped ramp to push dock carts full of gear up to the lot. We whistled while we worked as though Snow White was waiting for us at the truck.

We could not get David to show up in time for the lobster life photo on the new BBQ countertop, but WendyJo stepped in with Tommy to harmonize with the limit fronting the band. 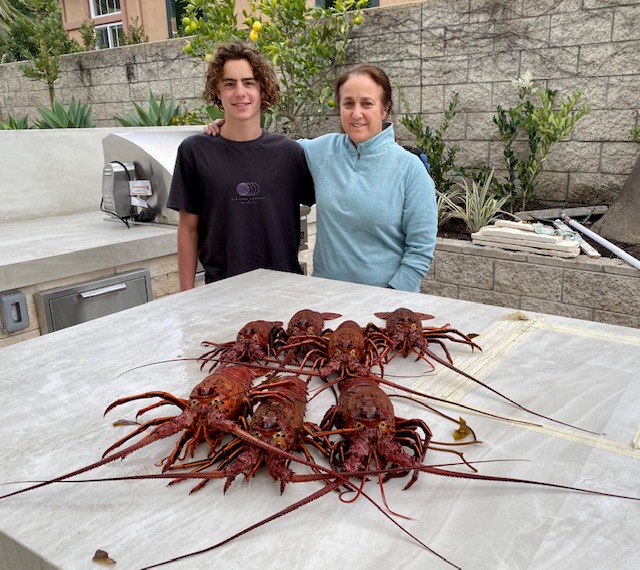 WendyJo had galloped back to our equestrian community on her cow pony after making sure we had some juicy ribeyes to give the crustaceans some company.  Our friends Steve and Jack Howard came by to help us devour our prey.  Jodi Howard missed out, as she was back in Texas dining with locals on armadillo, which is fondly referred to as Texas Lobster by the people of Oklahoma. 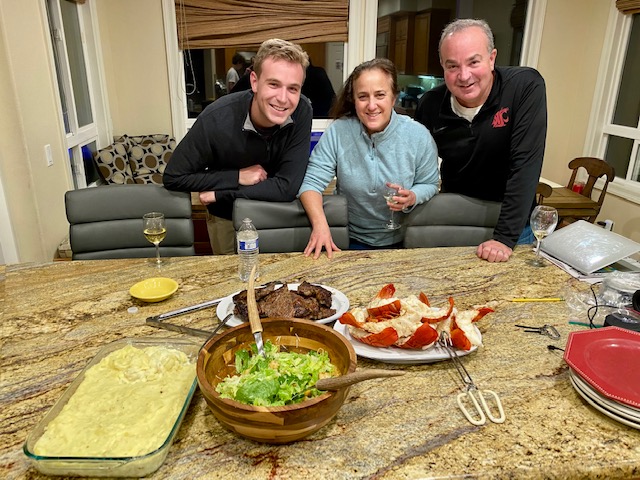 The tsunami hit Dana the next morning as the rain poured on us, but we were prepared for both disasters, as were the fishing boats that scampered out into open water as a precaution, leaving the Dana wharf area abandoned in the morning tide. 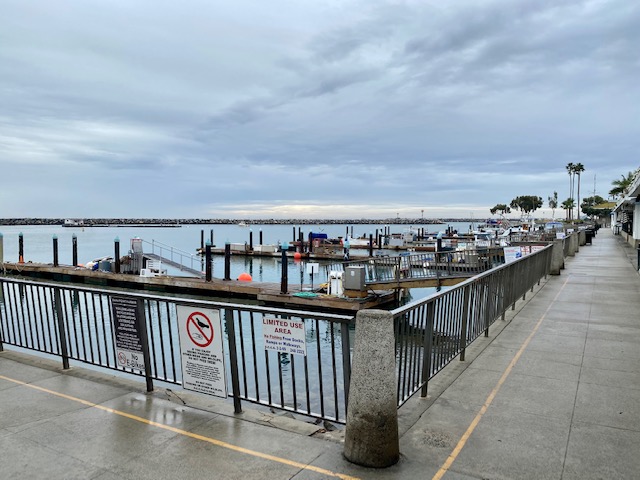 We were able to feed off the leftovers over the MLK holiday weekend and thus avoid the famine that so often lurks in the wake of the utter destruction caused by tidal waves.

Fortunately, our forward planning left us with little time to sandbag against the  volcanically induced deluge, as Tommy and David had agreed to join Tash and I on a Sunday morning walk.

We returned to the high desert cactus scrub of San Felipe, which, as a happy literary coincidence, is located at the base of the Volcan mountain range north of Julian. As was the case back in our November hunt in Palomar Mountain State Park, we were lucky enough to join up with our seasoned hunting companions, Todd and Robert.  With quail, reveillie is not quite so nocturnal, so we met at our traditional rally point at the Ortega Highway Del Taco at 6 am instead of 4 am. The weather was cool and clear.

The terrain in this area gets very steep and prickly in a hurry. That is where most of the quail we were chasing seemed to be taking refuge.  We are near the end of upland game season on public land where the birds have been subjected to a lot of pressure from walkers like us.

The recent rains had given the hills a little dust of emerald that belied a cactus-infested  land. 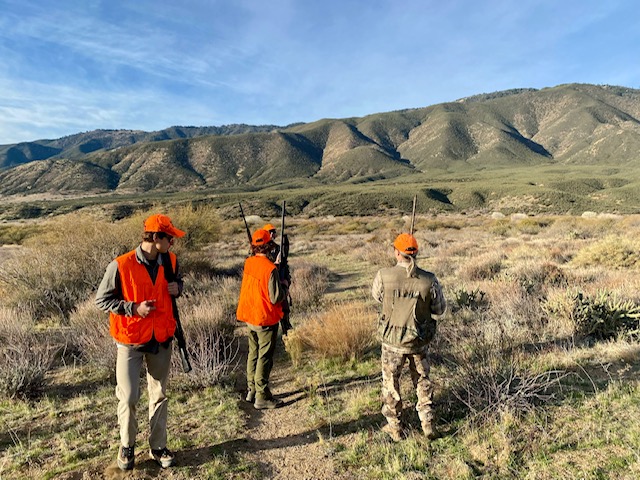 Tash looked back west from the drop into the lower elevation, but we quickly reversed course and headed back uphill into the rocky scratch that wore us down, but gave us a generally downhill return. 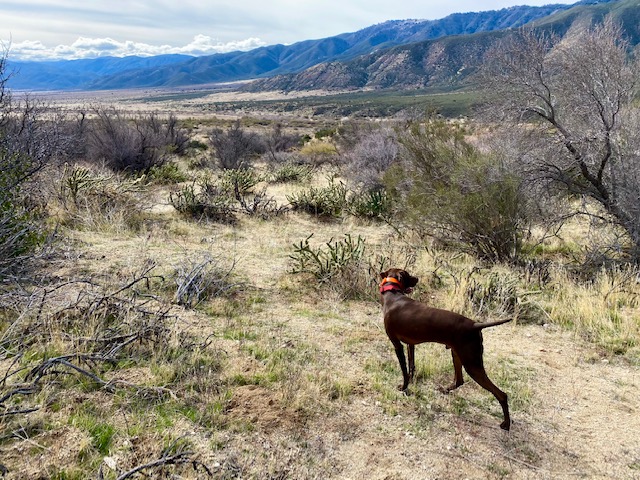 The birds flew low, hard and tended to double back on our efforts to get close. If  dependent on this kind of outing as a mechanism of survival, your narrator would present a slimmer  holiday profile than what gets earned hunting steaks and lobster.

Although we had a lot of desperate opportunities to shoot at birds that were pretty obviously getting away from us, we did manage to drop a few.  Tash earned his keep by pointing on holding birds, but they did not want to freeze for long.  He did a good job of finding shot birds that headed into the manzanita.

After five miles of getting outsmarted and outflown by these tiny, tasty morsels, we started leaning toward  the spot where we parked the trucks.  Once back, we all got busy picking the abundant variety of cactus spines that perforated our jeans and our relentless, exhausted pointer.

We were all more than happy to call it a day at noon, switch  out boots for shoes and drive back up to the Lake Henshaw cafe for satisfying lunch.

Once back at the Hacienda, we gave the birds a gentle marinade in olive oil, herbs and garlic before flowering and crisping them up in a cast iron skillet bubbling with olive oil and butter.  We had some tasty little birds to sample with our Sunday leftover ribeye and lobster pasta.

We get to live in a state where we can start a weekend harvesting lobster like they were blueberries, dodge a volcano-generated tsunami, blast quail  and still have a Monday holiday to sit back and watch the Rams disarticulate the Cardinals, limb from limb.

We are lucky to find ourselves so often in the company of those who share with us the pursuit of that which is elusive, yet attainable.  Life may not always be like this for us, but as long as we find ourselves pulling on a rope or scrambling up a hill behind a pointing dog as one more moment in a perpetual series of occasions for hope, we will surely know that 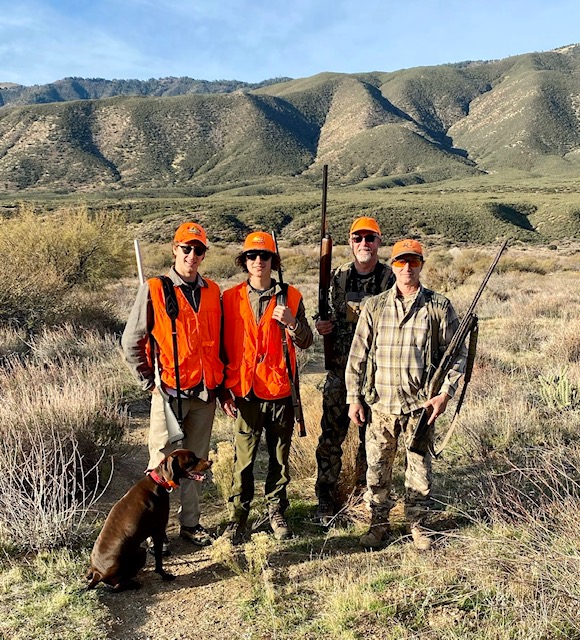