Tommy, David and I went out  of  'Pedro with Secret Skipper on August 2nd as early as time would allow.  We pulled our from the dock at the stroke of midnight .  We had a good plan.  We were to rendezvous with Skipper' s good buddy East Westman, who runs a  highly regarded charter business on his boat, Mandatory.  Our destination was St. Stanwyck Island, the least understood of the Channel Island chain, which runs from southern frontier of  central coast California all the way down to Oceanside.  East told Skipper that he would meet us there, as he knows that island like the palm of his hand.  I had not been to that place in 35 years and neither Skipper nor I knew any of the good spots from memory.
We would get sardines and meet Mandatory to team up with our combined squid lights to tank up on the candy bait and get schooled on the nuances of this fantastic rock that beckoned from 46 miles beyond our point of departure.
The marine forecast was a  bit dodgy, with 4 foot swells at 7 second intervals to give us a series of unrelenting hurdles to lunge through with both wind and seas directly against our course.  That would mean a downhill return, so there was a bright side.
The crossing proved to be quite nautical.  East had let Skipper know that we were in for a bumpy ride, as he was five hours ahead of us in a larger and slower boat.  Tommy bounced around in the cushion- fortified berth he spun like a cocoon in a vain attempt to keep himself from impacting the interior of the cabin, while Skipper, David and I grabbed handholds in the helm station to wedge ourselves against the hard-to-anticipate impacts that slammed us from the darkness. The wind somewhat unexpectedly came up to blow 20 plus as we got  closer.   It was a new moon, which meant big tides and a beautiful night sky that dazzled us with so many points of light that it sparkled like snowfall in a part of the sea unsullied by any adjacent light pollution.  We arrived  in the jostling rebound of the lee of the island at about 3 and got to unclench a little from the hard ride.  We radioed and scouted the rally point for the Mandatory with no reply.  We then turned on the squid lights at a location that was more random than we would have liked.  We jigged in vain until gray light overtook us.
The weather began to lay down as we gave up on finding the bait that only darkness can provide.  In the clarity of that transitional pause between chasing bait and the pursuit of the game fish we came to kill, we were treated to an interlude that allowed us to gradually unwrap the emergence of a dawn that slowly revealed the  breathtaking character of our  destination.
We snuck up on the outside rock that stands sentry to the island from the cover of the approaching swell 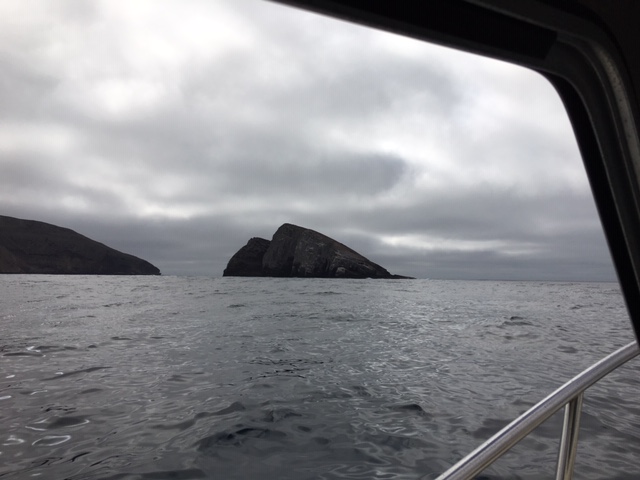 We fired up and began to explore the island for Mandatory and spots that looked fishy. We ended up circumnavigating the island (not very hard, since it is so small) and there was no trace of our intended companions, but plenty of chunky and willing calico bass.  We also hooked a couple of yellowtail that broke us off in the structure and kelp forests.

Half way around the island, we encountered this foundered little fishing boat, whose crew was no longer in attendance. 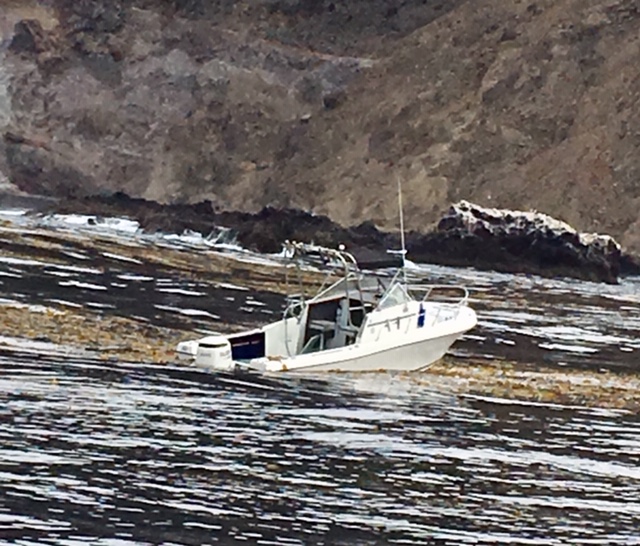 It was completely swamped, but they obviously had made it to the island.  Later, we observed a man in a zodiac drive over to assess the situation.

As we periodically radioed for our friends on the Mandatory, we continued to pick at the bass, hunt for yellows and drive off the seals which overpopulate  this remarkable sea mount. The island has limitations on how anglers may fish, including an entire quadrant that is completely off limits and  further restrictions on fishing deep water.  Given the fact that this island rises in a near vertical ascent  where it crowns the surface of the water, this regulation has the effect of closing off a sizable number of adjacent pinnacles. 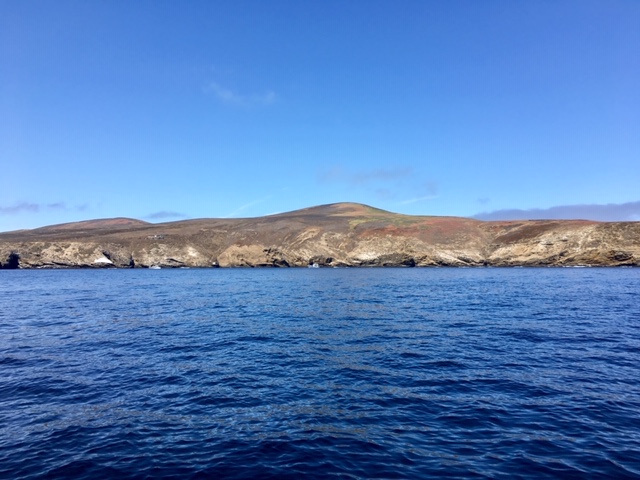 We fished inside Stanwyck Bay for more bass and  another couple of larger fish that managed to escape us by getting into structure from which we could not extract them.  The day got progressively more beautiful as we fished a spot that is a piece of Nature's Cathedral to the Sea.

We came around the the arch beneath  an outcropping that juts our into the sea like a pier. 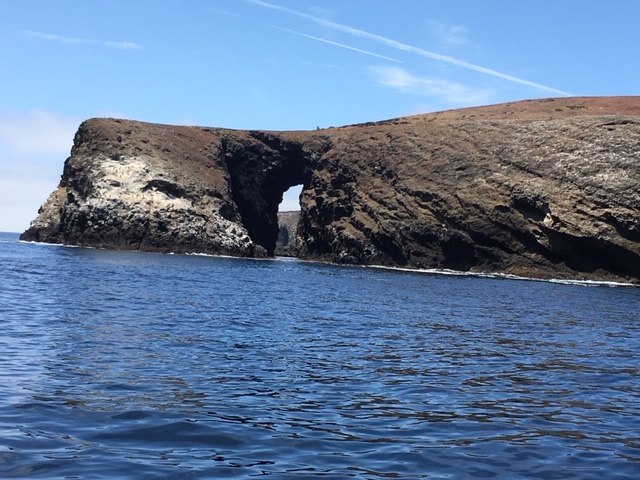 Below, David takes a break in the action just off shore from the statue of St. Stanwyck, who, legend has it, drove away the seals which infested this island in the early 1700s after being freed from a slave ship  by a galleon full of Spanish explorers, who brought him on to California after intercepting his temporary owners.  This resourceful and grateful native of the Belgian Congo converted to Catholicism and  began working miracles of nature in the early days of the missions along the El Camino Real, eventually settling at the mission in Santa Barbara. This prodigious piece of idolatry memorializes the patron saint at this hallowed spot at the back of Stanwyck Bay. 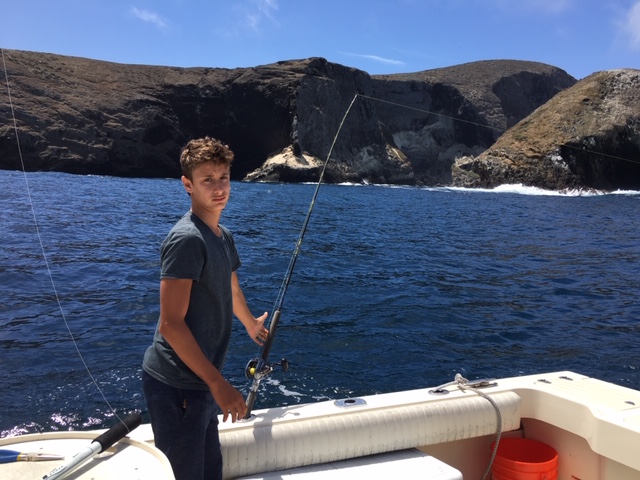 In the tradition of sea-dogma, the  pedestal beneath the statue marks a spot from which the last of the sea lions were captured and transported away to a location from which they could never return. 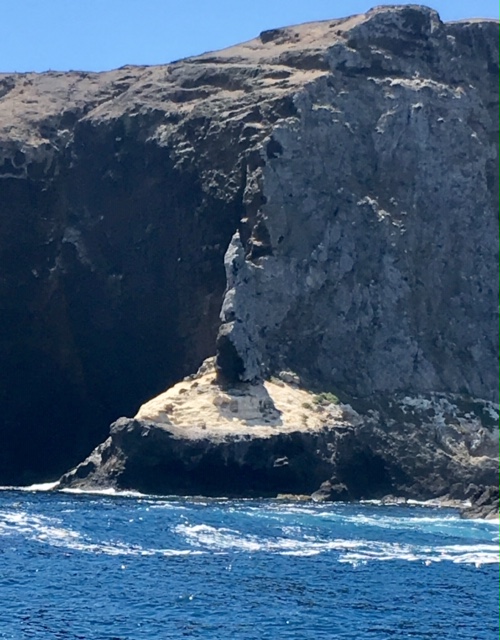 Unfortunately, in the 1980s, the Friends-of-the-Sea-lion movement joined forces with the Enemies-of-Seamen progressive caucus.    With their rally cry of  "Seamen stains our sensitivity!" this alliance steadily gained traction.  One of its achievements was the establishment of a seal hatchery across the entire side of the island that faces our shore. The sea lion eggs are nurtured in what is now a solar powered hatchery facility, which replaced the old diesel powered hatchery that started this program.  Friends-of-the-Sea-lion projects that this program, along with state and federal protections now in place to make it a crime to even  say a mean thing about a Californian sea lion, will mean that sea lions will soon be the most important and numerous ethnic demographic in the entire Golden State.
Like Shelley's Ozymandias mutely mocking the subject's delusional tribute to his own immortal power,  the statue  of St. Stanwyck stands sentinel to a lost cause.  The  sea lions are more numerous than ever and sent patrols to follow our every move, along with dogging every other boat that presented them the opportunity for harassment and plunder.  Though the monument to St. Stanwyck remains, our only active guardians are the makos and whites, whose appetites cannot keep pace with the expansion of these pinnipeds.
As we approached mid day, we went around the island again and continued to find spots that either would not fish because of conflicts in the current and wind direction, or  produced a pretty steady bass bite with  a couple of big yellowtail successfully launching screaming runs into kelp forests.  After noon, when  we were running low on bait and were resigned to the possibility of going home with no exotics, we found a spot below fluttering birds and breaking fish.  We were not the only ones there, but there were few boats in the entire area, as this offshore location gets limited angling pressure because it is so highly restricted and a bit of a pain to get to.
Crashing yellowtail began breaking on bait fish to our east. The boils migrated toward our boat beneath the telltale wheels of seabirds that began moving in our direction.
Skipper, who had joined us in tying on a circle hook and fresh fluro to replace the frayed leader he did not trust, was the first to get lit up with a yellow that tore off his line in a screeching run that allowed us to get hopeful again. 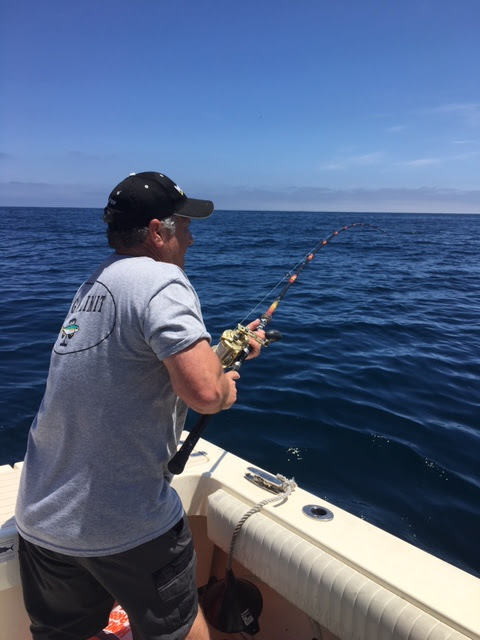 Skipper swore that he would jump into the sea and swim away from the boat forever if this one got away too.  It did not. 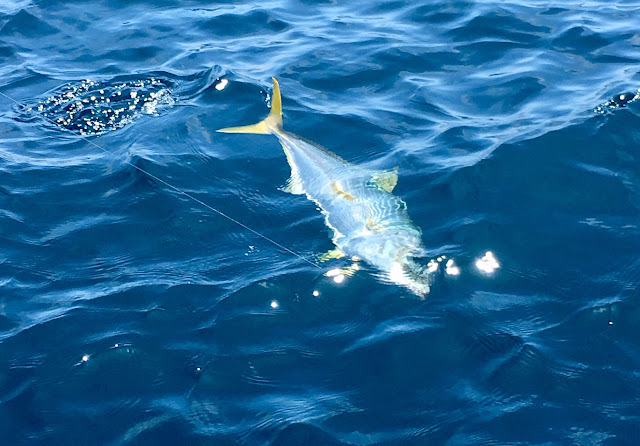 We were greatly relieved when we managed to  pump it to the top for a crisp gaff shot right in the mouth ... 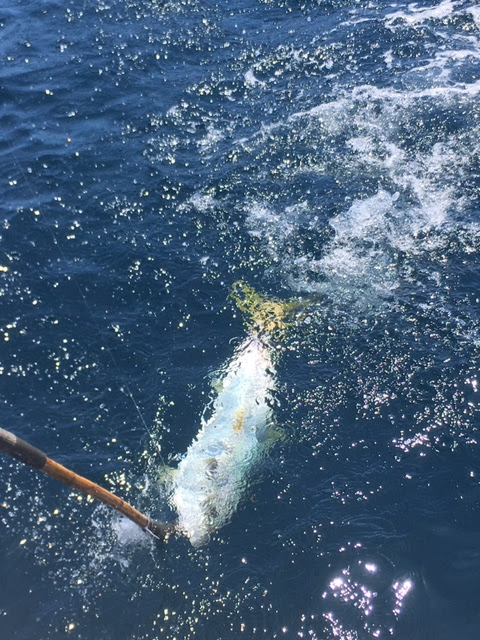 and over the rail into the boat.. 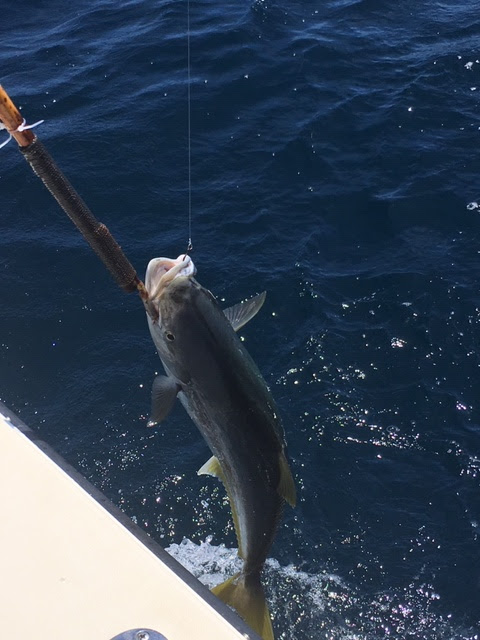 What huge relief to end our losing streak at the fins of these tasty adversaries.. 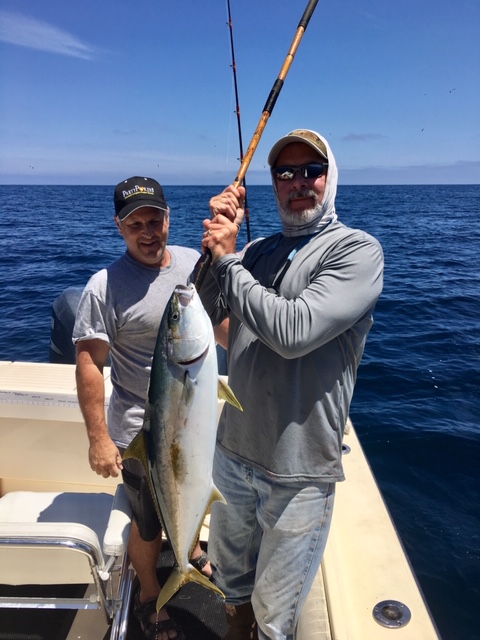 It would have been a sadder and more lonely trip home if we had been forced to leave Skipper at the base of the statue and drive his boat back to Pedro.  To make sure of driving his point home, Skipper hooked and landed another yellowtail right after this one.
Your narrator hung one a short time later, as did David.  Tommy got busy with the camera as David was wired and we had a double going. I kept a tight drag, but felt my own anxiety about not wanting to lose another one of these fish that seem to sell their lives so dearly.  It kept making runs and nodding the rod tip up and down against our efforts to claw it from the depths. 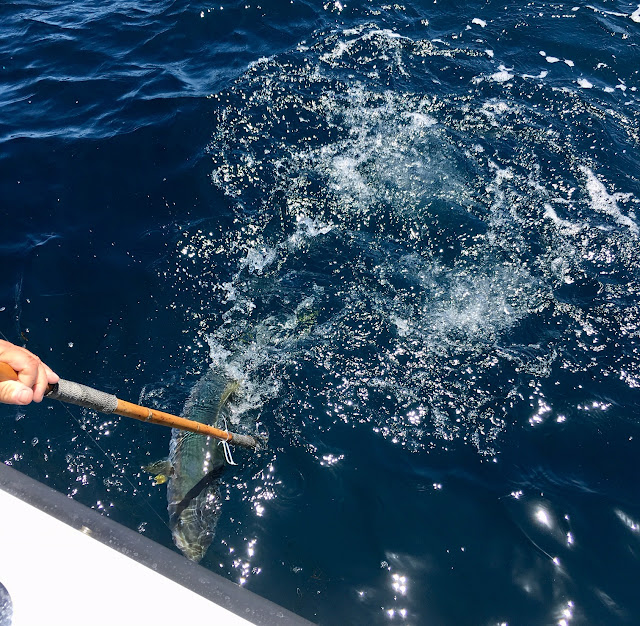 David kept his rig from being yanked into the sea on a yellow that screamed line off his reel against a very tight drag.  It was a big strong fish that ultimately gained its freedom through sheer force. 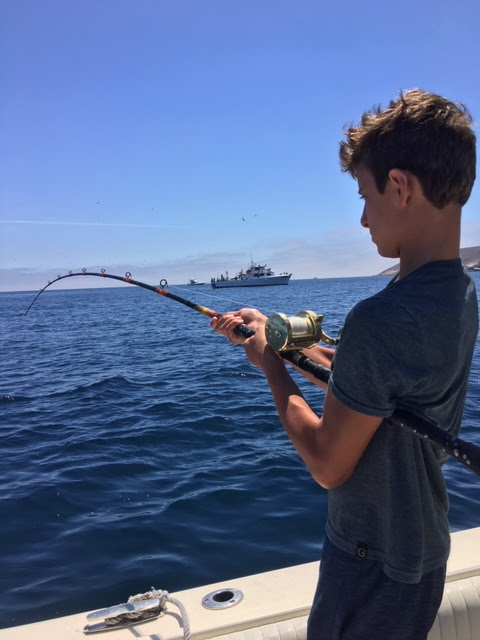 With our hold now occupied by three nice yellows, we decided to head back after cutting up our catch.
Autopsy revealed that these jacks were chock full of tuna crab, which must have been pluming deeper in the water column, as we saw none at the surface. 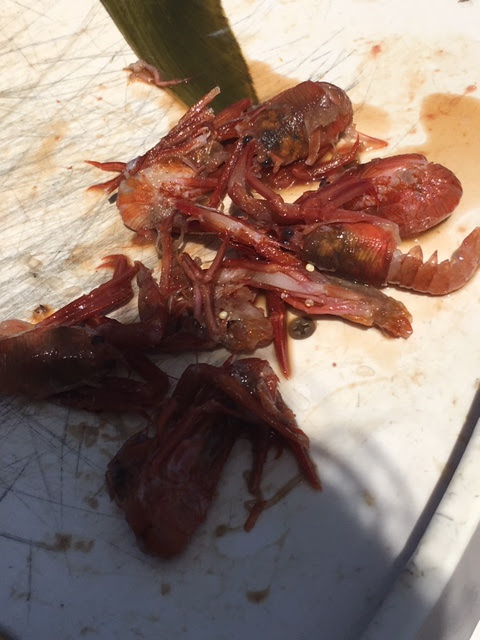 We pulled the hook and headed back.  This time, the much gentler wind  and seas were at our back as we surfed home in less than two hours.
On the way back, when we were in cell-phone range, East Westman finally broke his radio silence to let us know that he was sorry that he was unable to join us.  It seemed that out of concern for his clients' safety, he had turned back mid-channel from Stanwyck and headed to the safer waters off Catalina.  The need for preserving the secrecy of his location and new plan prevented him from answering any of the radio calls we made, along with the fact that he had angrily shattered his radio with a baseball bat after he caught one of his clients frantically trying to Mayday the coast guard when Mandatory was still pointed into the treacherous waters on the way to Stanwyck.
Thanks to Skipper's raw courage, tremendous angling skills and energetic willingness to risk all our lives in the pursuit of game fish, we had what we needed for another hamachi festival as we join with arriving family to celebrate our Dad's 90th birthday this weekend.
May your  weekend be as fun and your food fight for its survival just as much as ours, so we can all get to say..... 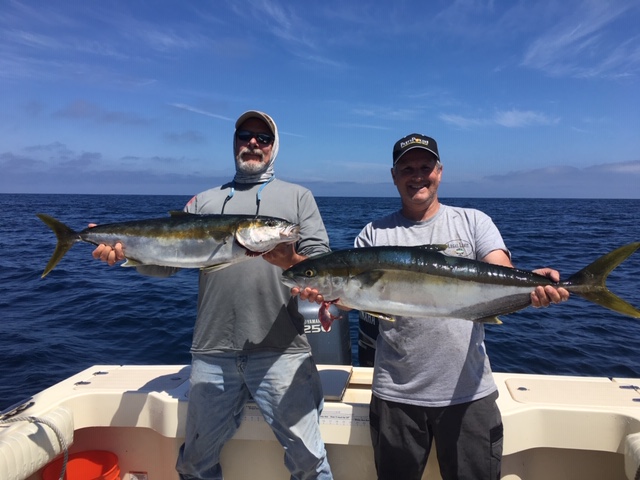