Saturday night your narrator was once again invited by Secret Skipper to head out in search of the not-so-elusive California spiny lobster.

We were concerned that Saturday might produce a crowd, but we were buoyed by a weather forecast that called for brisk weather at our island destination.

Connor and Sarah begged out of another invite because they were throwing a Halloween party.  Tommy had been ill, needed to sleep and was forbidden by WendyJo from going on a boat (where he historically sleeps more than at any other venue). David had a big day planned into the afternoon at a pumpkin patch, so once again our potential crew was unavailable.  It would be just the two of us trying to find 14 bugs that were big enough to eat. 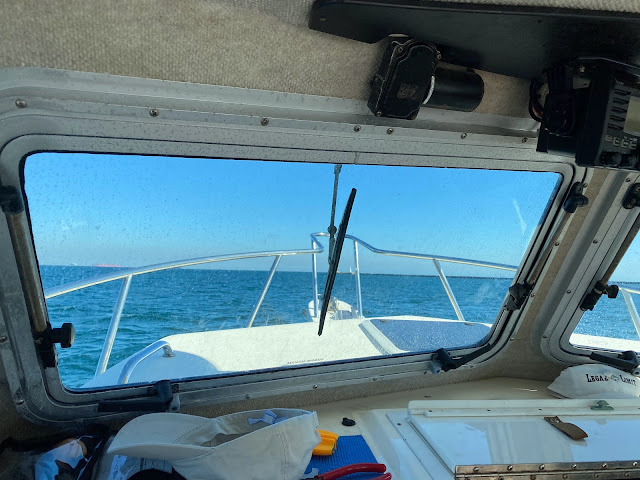 We skipped our usual load of live sardines and went with the frozen as we made our way to Pedro light and the gap in the breakwater. 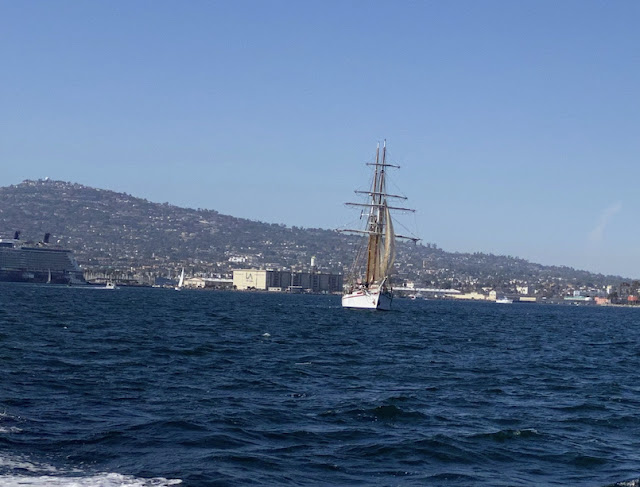 We were nearly intercepted by a pirate ship that was bearing down on us as we exited the Cabrillo Marina Channel.   The Captain got on a bullhorn and ordered us to hove to and surrender. 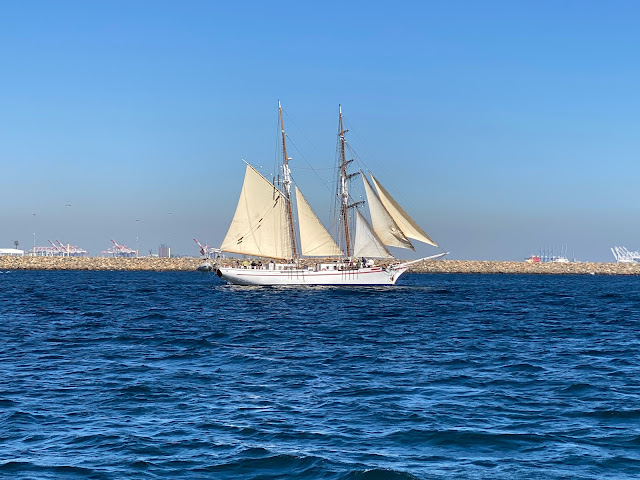 We turned down the radio and told him that if he expected us to stop, he would need to grow a pair - of outboards.  Then we saluted his vessel and gunned it to the west.

We hit a moderate amount of wind chop in the San Pedro Channel, so we were held to less than 20 mph on the way over.

Because of our relative success in the shallower sets over the last two-plus seasons, we decided to reduce the length of our two deepest 300 footers down to 100 feet by coiling and zip-tying 200 feet of it in a bundle on the counter-sunk side of the float.  It turned out the matted coil had so much buoyancy that we had to clip-in another hefty sinker get it to counter-sink so that the tag end would neither float nor drag down to the bottom.

We put the other 5 at between 100 and 40 feet, so that we had a neat row of shallows and five more scattered on rocks in the mid-range.

The wind died down, but the current started flagging the countersinkers and eventually pegged the deep floats.  We got nervous about how they looked.  We tested one of the deeper hoops and found starfish in the mesh, so we were pretty sure our hoops were not lifting off the bottom.

We rolled into the shallows and started listening to college football on the radio, as we waited till dark like Audrey Hepburn. Nobody came out to join us and we had the island to ourselves.

We decided to start with one of 200 footers at around 7:15 with a crescent moon to the west, just above the silhouette of the island.  When we edged up to retrieve the float, we noted that the current was no longer roaring and the floats were not pegged.

Your narrator grabbed the buoy and fed the line through the Bagram as Skipper sampled the tension with his experienced grip.  "This one has got meat.  It feels really promising."  This was welcome news that I received cautiously, as the mid-rangers had been hitting pretty near the Mendoza line, just as the deepies had performed their way completely out of the lineup and into the shallows.

The meshed hoop came into view in the lights as we saw a scurry of brown movement.  The first pull produced five legal lobster, two of which were really large specimens.

The 250 came up blank and we got four more nice legals in the next three pulls.  This brought us to nine with five pulls left in our set, rolling into the 5 shallows that have recently been the most productive depth.  We were not disappointed, as we easily made our limit in nine pulls and then turned back out to recover gear, dump bait and then strip and stack it all neatly for the ride home. 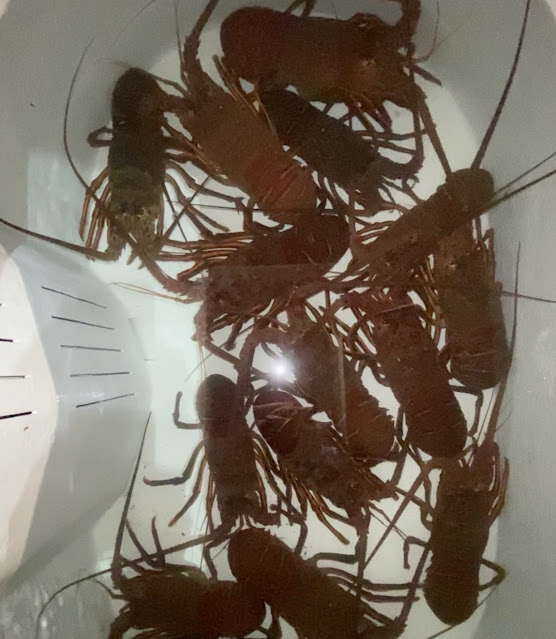 As we celebrated on our retrieval, we threw back at least 20 legals and probably three dozen shorts in the stupidest crawl to which I have borne witness in over twenty years of hoop lobstering.

We were tied up and cleaning the boat in Pedro by 10 pm and I was home in San Juan Capistrano before midnight, which is a first for me on any daylight savings time run.

I made the fishing averse twins fulfill the "lobster life" growth chart photo, despite their very limited connection to the enterprise.  It pains the old guys that the next generation continues to miss opportunities to earn and learn during these halcyon days of crustaceanal carnage. 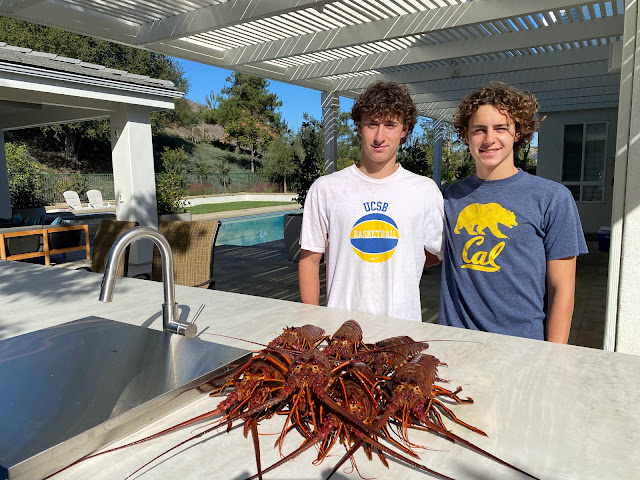 We had mostly females, but a couple of nice males, as they good naturedly dogpiled for slaughter in the sink. 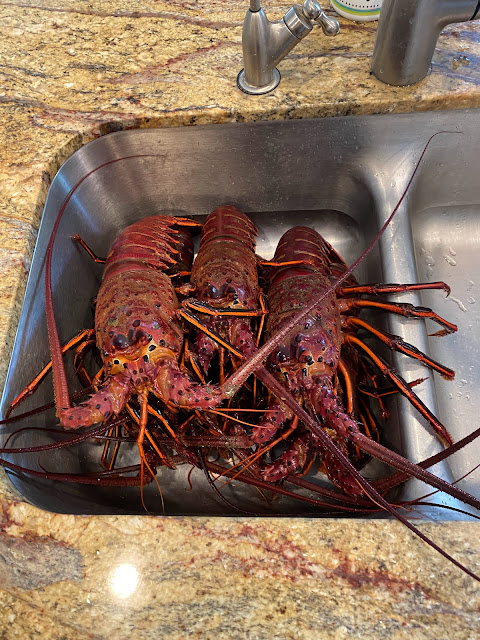 The overall size was really excellent. 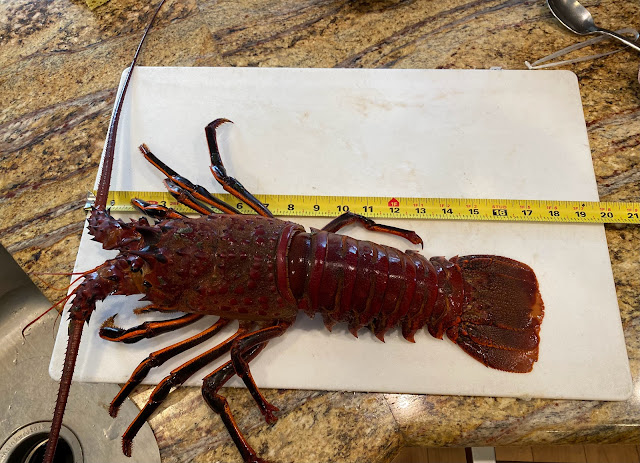 They all ended up stacked in anticipation of their starring role in our big production. 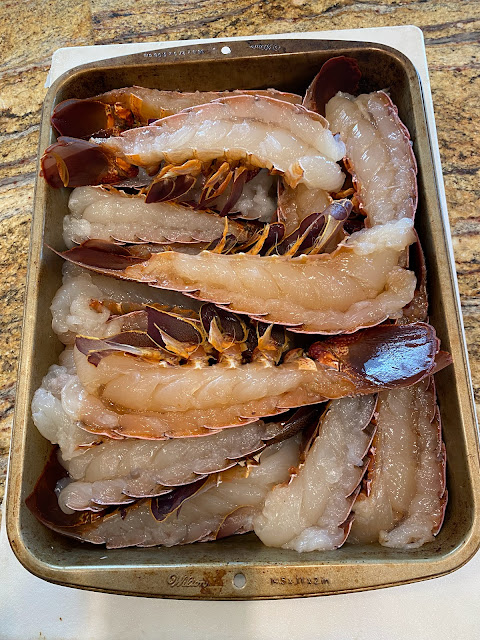 We called up the Howards, the Devaneys and the rest of our dependable lobster eating crew for a Sunday feast that featured salmon, ribeye, and a pile of bugs your reporter dared our guests to try to consume. 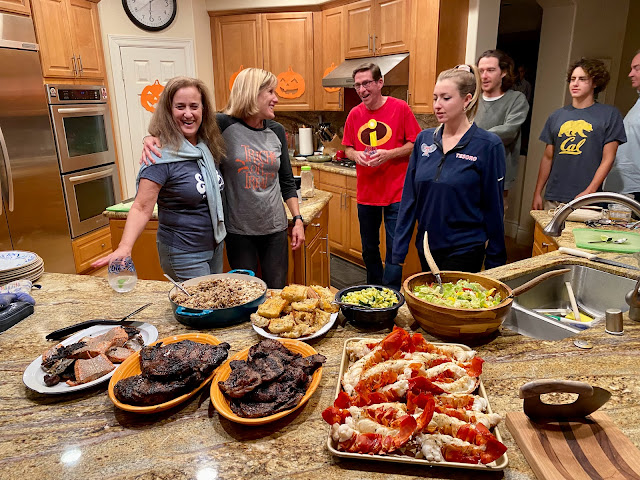 It remains nice enough to dine outside in shirt sleeve weather on Halloween weekend.  Even cousin Andrea, who just happened by for a quick visit on her way back home from San Diego, was pressed into the fight against leftovers. 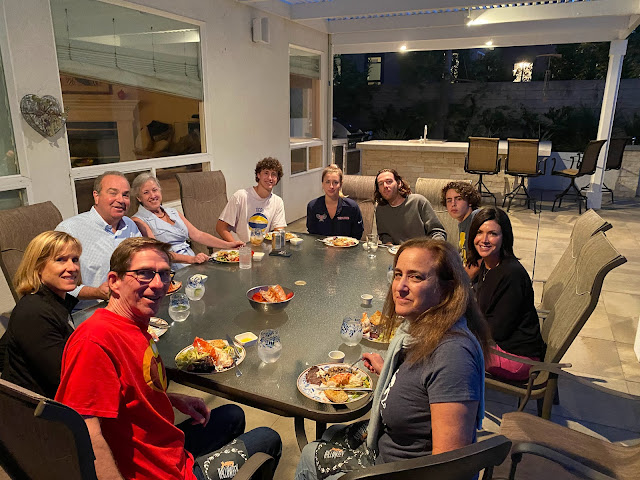 These are days of abundance in our local marine cycle.  This is currently a very healthy fishery that is not getting stomped on for the moment.

Gather them while you may and share what you can snatch like a grasshopper from Poseidon's open palm, cuz 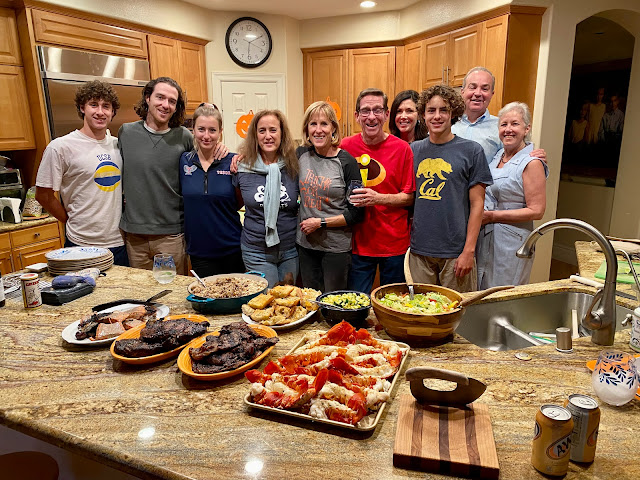