Lobstering around the Dodgers

Your reporter and Secret Skipper avoided investing any more time  watching the distraction of the greatest baseball team ever to get their asses handed to them by the San Diego Padres in major league baseball history. 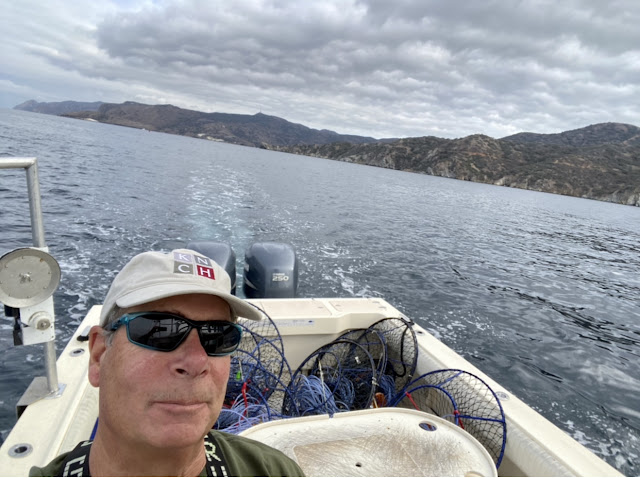 We opted to take advantage of the rain to sneak over to Catalina for our first trip of this 2022 season.  Connor Devaney was supposed to come with us for his first foray into this fishery, but he expressed concern about the possibility of rain.  We assured him that it would not be that bad and that we would not think of him as being a sissy if he didn't come with us, even though he knew that we totally would.

As it turns out, he ended up in the hospital with something that could have made the trip a bad idea, so we let him off the hook, although we did stop by his hospital room to egg his window early in the morning after we got back. 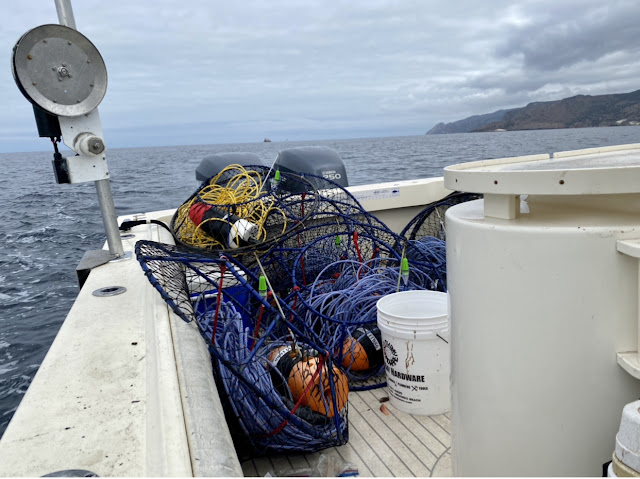 It had been raining and the forecast, in combination with gas prices and the Dodger game, made for uncrowded prospects at the island of Romance.  We liked our chances. 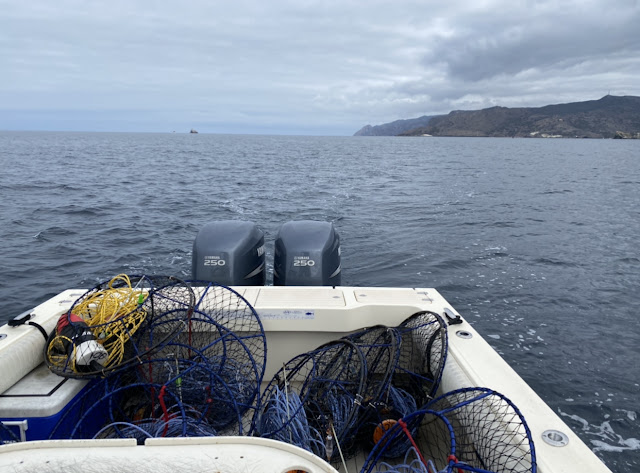 We got a scoop of fabulously active sardines from Mike at San Pedro Bait Company around 1 pm.  We stopped on several paddies on the way over but got no love from the pelagics in 65 degree water.

In the lee of the island, we were treated with a spectacular assault on shoals of pinhead anchovy by voracious mackerel that we quickly tired of catching and releasing as we waited for darkness to ripen.

The rain had moved through the island and the wind was down.  The tide was falling as we prepped our gear and made ready to start dropping at 5:30 for a crawl that would not be starting until after a 6:30 sunset.  Daylight savings time lobster season is always a late start, but sometimes gives you shirt-sleeve weather, as it did on this becalmed evening.

We had a great combination of fresh sardines, frozen sardines and fresh salmon carcasses.  There was very little current and the counter weights hung vertically.

We made three deep sets in water over 200 feet deep, but these proved unproductive when we started to pull gear at 7:15.  It was as easy as it gets, with no wind or chop to make the buoys anything other than stationary targets. We got to park and pull instead of the sometimes aggressive motor jockeying that can be required to maintain position during gear hauling.

The three midrange pulls earned their keep with 4 legals to get us pocket money as we started rolling toward the 4 shallow sets.  We were very optimistic because these have been our most consistent performers and the recent rain was likely to get them walking from the run-off so close to their domain.

We were not disappointed. 75 feet was the depth for  the evening walk.  One of the shorts had 10 lobster, 5 of which were legals. 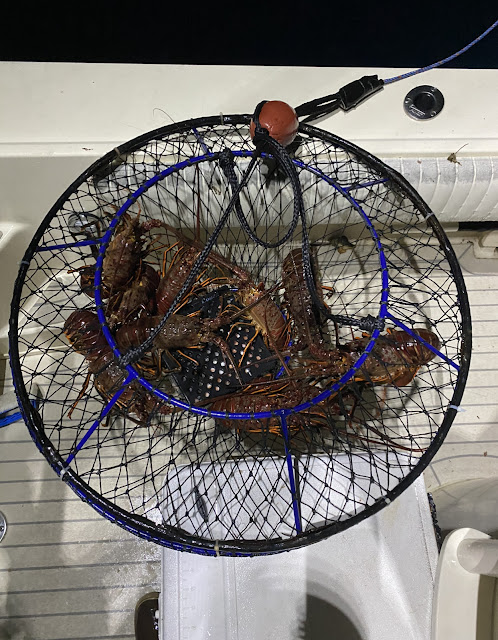 Another had 10 with 3 legals.  None of them were particularly large, but we were already throwing back keeper lobster after 9 pulls.

By 8:20 pm we had matriculated into recovery mode, first hauling in and breaking down the expensive but labor intensive deep sets that performed like the Dodgers in producing nothing, despite their vaunted depth.

We were treated to periodic flashes of lightning above the mainland as we worked our way through dumping bait and stacking gear in the stern.  We had the area completely to ourselves during the very short time we needed to haul 19 pulls.  We listened to the mighty Trojans let Utah get the last touchdown and go for two.  Our radio reception made it hard to discern any defensive plays being transmitted during the broadcast.

When we got to the shallow sets, it was the same thing all over.  We had one with 13 in it, 5 of which were legals.  We threw one legal after another into the sea as we listened to the Dodgers blow a 3-0 lead.  I was so glad we were doing better than they were.

We arrived in Pedro at the tail end of a tiny little squall that made us put our rain gear back on as we cleaned up.

The tide was out, so the ramp was steep, but that is about the only thing I can conjure up for complaining.  We listed to the radio account of the Dodgers laying down their bats in the final inning like they were trying to inherit the Earth as we buttoned up the boat.  Their team and ours finished up about the same time.  Even with the money and youthful stardom pulsing at me from the Dodger airwaves, I was glad I was part of this crew and not theirs.

Your narrator was home by 1 am, which is as good as it gets for lobstering during daylight savings time.  The trip was stupid, easy and an enchanting alternative to so many other lamer things that I could have, and probably should have done.

We got the mandatory Lobster Life photo in before the boys went off to another lightning infested swim meet.

I guess it's time to root for the Padres, give thanks to Poseidon for delivering up to us again and keep in mind that 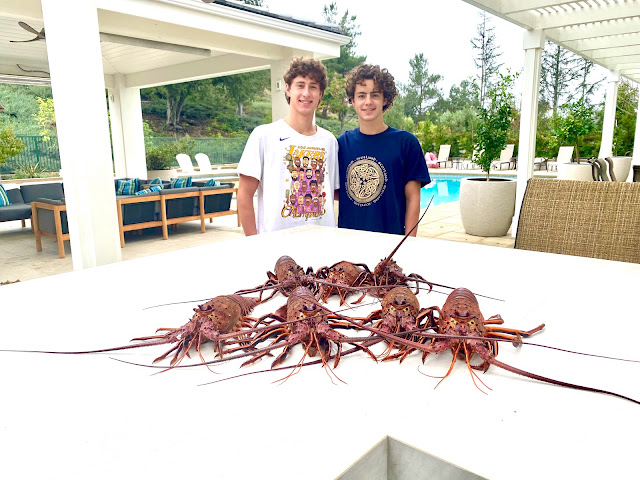