On Friday, while we were still recovering from our Thanksgiving food stupor, Tommy, David, Isaac and your reporter joined Secret Skipper on a mission to see if we could extend our good luck with all  four of the Schmitt boys in action.  We had never had the full complement out for a night of hooping, but this year's fortune made the idea of filling five cards more than just a dream.

Your narrator used up all of the turkey leftovers making sandwiches for this rare excursion about which Secret Skipper and I have fantasized for years as we have toiled away, mostly by ourselves, to throw back so many legal lobster these past few seasons, and most especially this one. Isaac, who had been receiving our reports and invitations from the north, held the door open for  a chance to cash-in on the bold talk we engaged in during the invitational process that lured him away from  Haley's grandmother's house in LA to join his younger brothers on this often-planned-but-never-executed adventure.

Tommy and David, who only had swim practice for a couple of hours on Thanksgiving Day, had a 7 am 10 am pool workout and so were able to eat and then sleep on the way to Cabrillo Marina, where we would rendezvous with Skipper and Isaac. 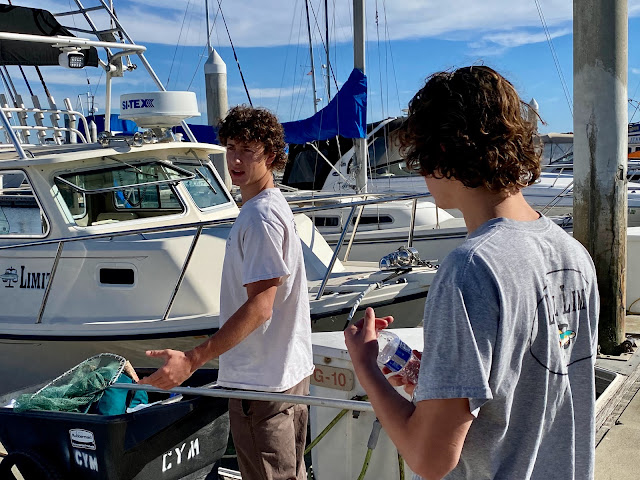 We left Pedro at 1:30, with some fresh salmon carcasses and plans to load up on fresh sardines at the San Pedro Bait Barge, since we had used up our supply of frozen on the slaughter we have perpetrated on earlier trips so far this season. 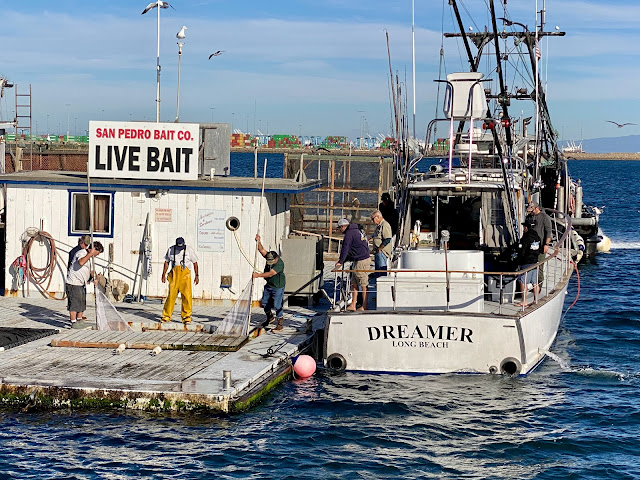 We were disappointed to find the legendary Dreamer waiting for the seiner  Wolverine to deliver a fresh load of live bait (we only needed dead), as they scraped the boxes for the elusive fin bait that remained. 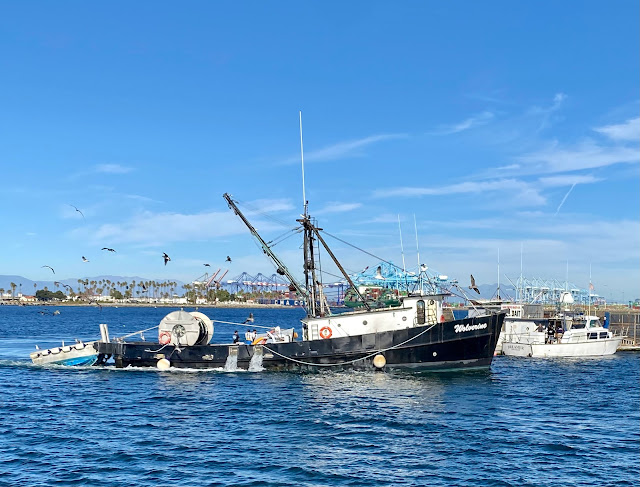 After about an hour of holding position in the wind, we watched as the Wolverine gradually tied up and helped Dreamer fill its tanks before allowing us to pull up and load our five gallon bucket with a scoop and a half of sardines for a hundred dollars.  We thanked them for their patience and decided to try a completely different island than the one that has produced limits without fail for the last 2 1/2 seasons. 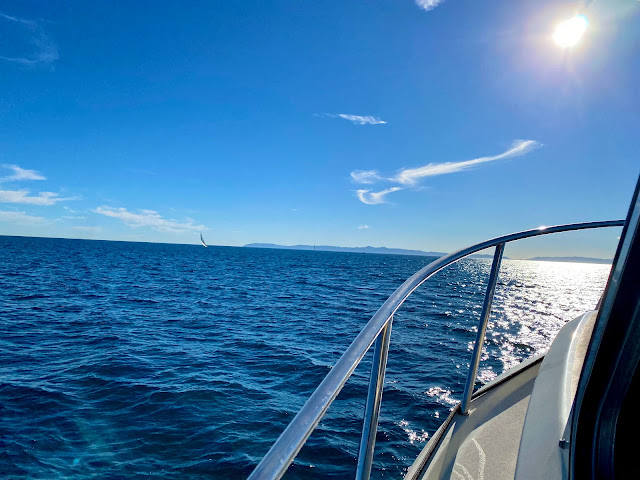 We pointed into really calm seas and made the channel crossing at 30 miles an hour. David continued his nap on the velvety v-berth of backpacks and canvas to the lullaby of slapping ripples cleaved by our keel. 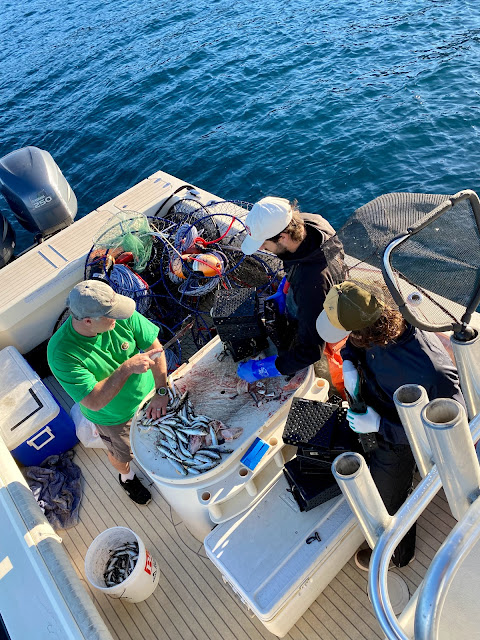 We had exactly enough bait to fill the bait cages, as Tommy and Isaac obeyed Skipper's instructions, which, in the tradition of old school chain of command, were delivered at knife-point.

We had a tiny slice of  a southern moon to work with, so we were optimistic that there would be sufficient darkness to cause our prey to walkabout in a parade of scavenging.  Skipper even broke out his secret bug spray, which we use to coat each stuffed bait cage with an odious slime further calculated to lure them into our little cafeterias of death from above.

We had our set completed at 4:30 pm, just as the Gale Force and Triton made their appearance at our location.  Neither of them were fishing our specific area and so once again we had the lee to ourselves.

Skipper of course wanted to start pulling hoops during daylight, as soon as the last float was away.  We kept trying to distract him long enough for night time to arrive, but we ended up "checking" on a few during what might generously be called dusk, with the orange yellow glow of the all-too-recent sunset still lighting up the island.

We moved our 250, which was of course empty, to a more favorable looking spot and then molested a couple of the shallow drops to get them out a bit deeper.  We did note a few shorts in the shallows, which we decided to leave in so that others would see and join them, as these insects seem to love a crowd when feeding.

Isaac began to question our optimism and speculate that since we now had overstaffed our seagoing safari, that the animals might not come out to play in the way he was trying to suggest we had promised him with all of our enthusiasm for this reunion of wizards and apprentices.

We rolled out to the mid-rangers we had set in about 180 feet and started pulling about 45 minutes too early.

We had a big mountain to climb and so the tactic of a short soak the first time around was a bit of a gamble, as the first set is usually the best in terms of producing volume.  We once again debated the shop-worn topic of whether lobster leave a baited hoop once they get in (they definitely don't), as it is essential to support our impatient Skipper's My Pillow theory of premature ejection.   This nonsense is cover for the fact that Skipper simply cannot bear to leave lobster hoops on the bottom once he no longer has anything to do except pull them right back up again. 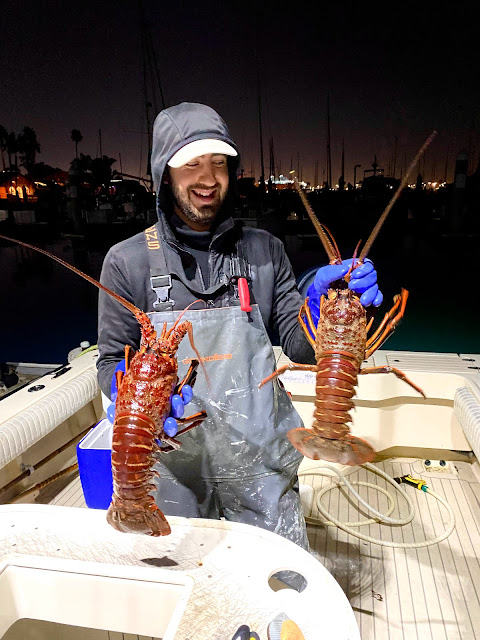 Despite all of this theory, the initial pull produced 6 legals and was the hoop of the night by a big margin.  Isaac became a believer.

We worked our way through a crawl that probably would have produced limits in two sets for all of us if we had any patience, but we kept yanking until we had 20 legal bugs on board after the first complete set.  Not bad by any standard.

The night just kept getting calmer as we watched Gale Force come over and start to pull on its set a mile or so away from us.

Isaac's doubt began to give way to cautious team spirit as he sampled the quality of our guests.  We moved through our first set with a pretty consistent harvest of mostly shorts with a few solid legals mixed in.

We proceeded to work through three sets, as the harvest slowed down to the point where we were pulling faster than they could cover the ground to get inside for the elevator ride up.  The shorts we were leaving inside to incite the crowd started to get in the way and fill us with false hope, so we started throwing back more of the shorts and leaving only a couple in each hoop to spread the good news.  We pulled a ratio that was probably 60/40 shorts to legals, with males constituting roughly one third of the keepers. 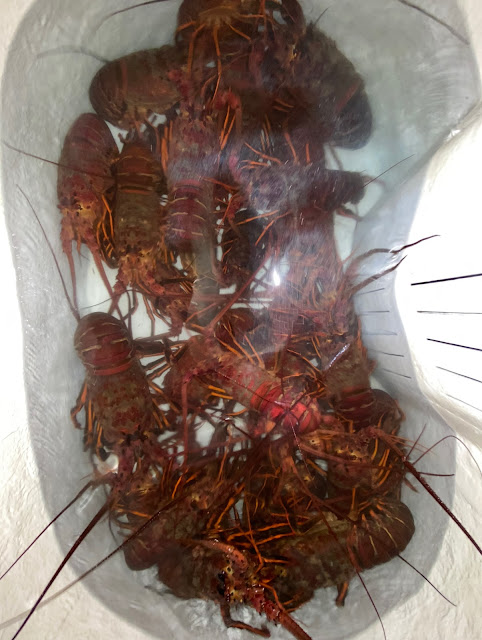 At about 9:30 pm we had achieved the impossible dream of reaching   five full limits.  We averaged roughly one legal per pull.  Kipling once said "when it comes to slaughter, you will do your work on water," but I am not sure he was thinking of  the war on lobster.
It sure makes me want to shout Gunga La Gunga.
We began to break down and stack the gear for Tommy's nest-of-canvas nap home at 30 mph on another silky ride to the green beacon of San Pedro light.
We were at the dock by 11 pm, which is the latest we have arrived home in port during this ridiculous season of abundance.  We had a big crew for a fast clean up.  All of us shook hands in the parking lot to celebrate the first time we have all been together to both make the attempt and actually pull off the dream of full limits for five.

Isaac took a sleeping Tommy home as he followed the hibernating David and I back down to San Juan, where we knew WendyJo would be anxious to throw down for another feast after hosting her family for Thanksgiving turkey 48 hours earlier.

The full crew of boys arranged themselves with our sad pets for the mandatory Lobster Life photo as the flags of a Grateful Nation and one of our pointing dogs gave witness. 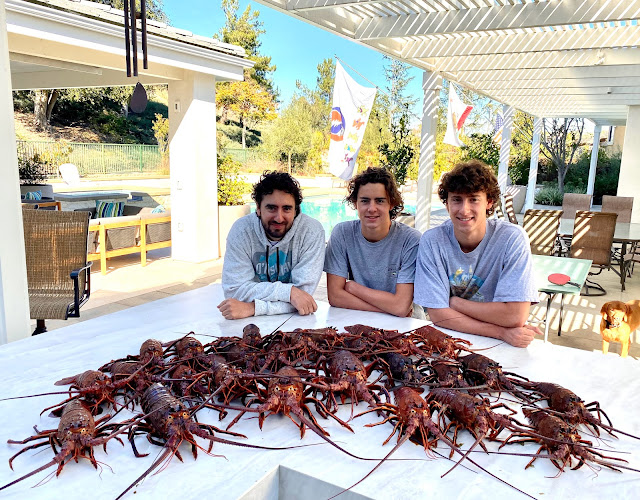 Even Fred MacMurray would be jealous of me. 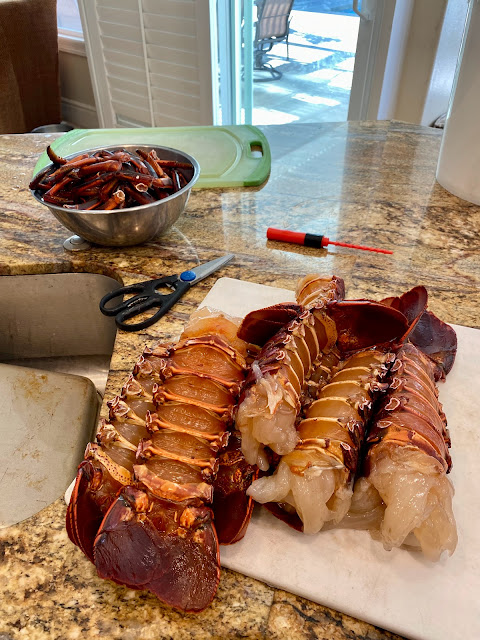 After the medieval wet work was done, we had a stack of candidates for  consumption. 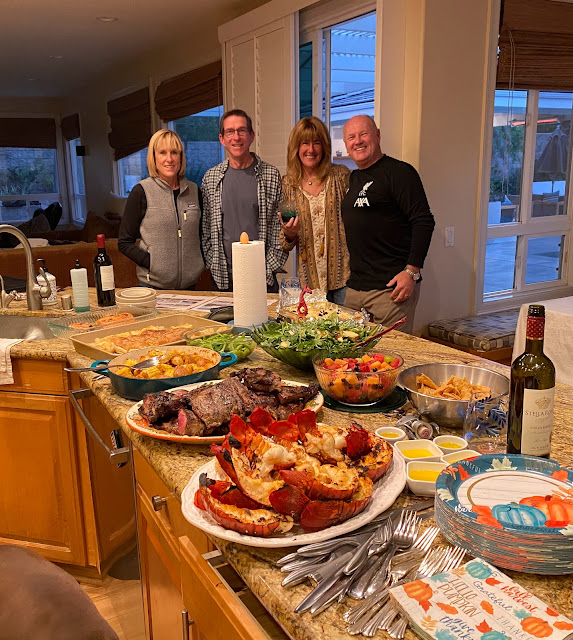 We were able to muster a group of losers who had no holiday plans to come over to help us consume another kill. 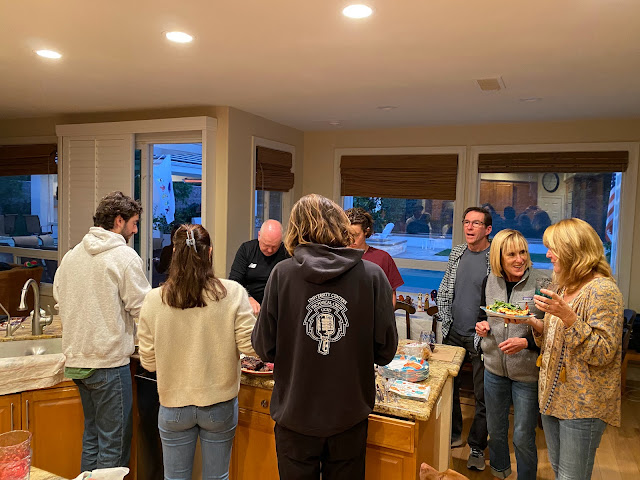 Our modest crowd of consumers politely waited their turn, just as we did at the bait barge, before getting down to the Om-nom-nomery that is our sound-track for celebrations of food, friends and family. 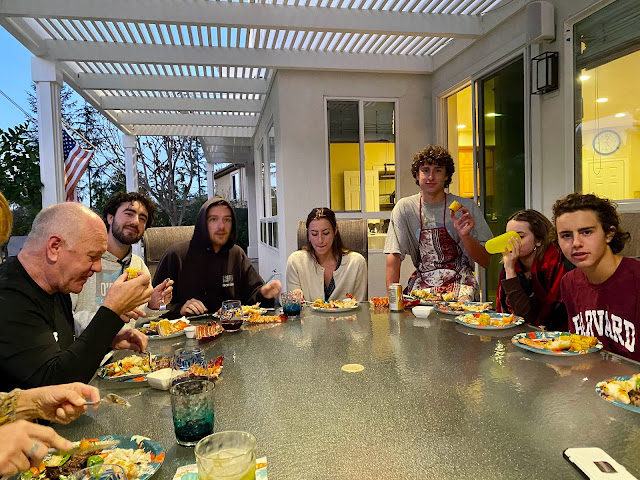 We hope that all of you are enjoying the last vestiges of family time and the aftermath of double-down gluttony from the safety of the NFL couch, or wherever this extended weekend may have taken you. 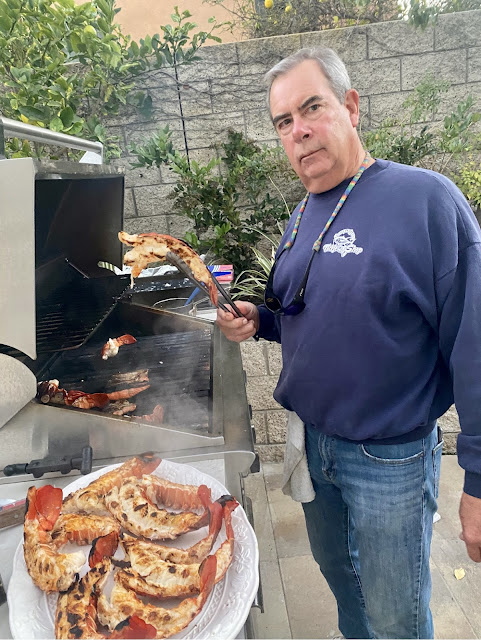 May these times of good fortune remain with us as long  as the Deity sees fit, as we give thanks for our circumstances and never forget that 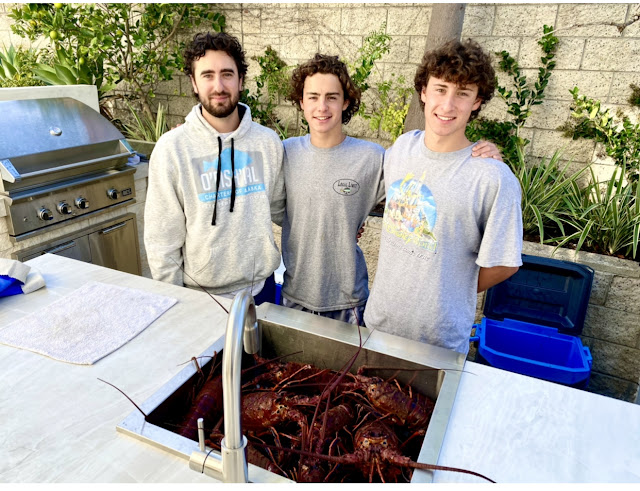