Saturday night Secret Skipper and I were able to persuade David to crew with us at Fantasy Island, which has just been so good to us in recent times.

We were coming off what we thought was the greatest crawl we had ever seen a couple of weeks ago and figured it would be hard to beat.

We knew we had a big moon, but it was not going to rise until 8. Darkness is getting serious these days by five thirty so we figured to have some time before any lunar grip started to influence the crawl.

We were on the heels of a hard rain, so the big ones might come out to march to the tune we were playing. 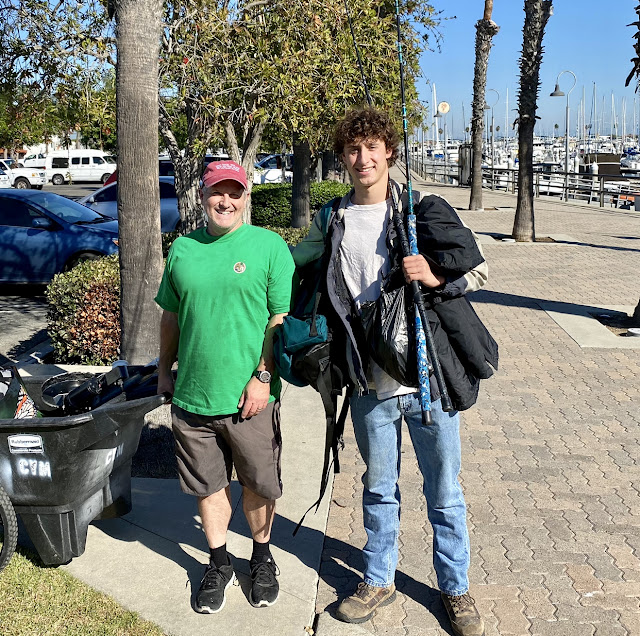 We had an uneventful bait cutting and cage stuffing session and started to deploy gear by 4:30.  We found a nice set of stones in 175 feet and bracketed them on four sides in a tight square.

We spaced the 6 shallower hoops in ranges of 50 to 130 feet on some promising structure to wait for an hour of post sundown walk about.

We noticed one of of our shallows was in too tight and went in to check it and re-set it.  When it came up, it had four shorts and a real nice legal.  We were on the board.

While we were loitering, a really pretty Grady White 30 with a couple of knuckle-heads began maneuvering around our mid-rangers.  We were stunned when they dumped over a hoop right in the midst of our four buoys and then moved away.  It was an incredibly rude move.  We assumed that they thought we had a good spot that they just had to invade. Their hoop was lighter, their floats tinier and it just drifted around in our set.  We did not want to pull through their mess and decided to to let them pull first.  We watched them come over and try to figure out how to even get close.  They did a pretty good job of backing in among our buoys without chopping up our lines.  It was  an obvious party foul.  We asked them why they had come from a set that was close to 1,000 yards away to put one in the middle of our set.  Instead of just apologizing and getting out of there, they lamely tried to say that there were no buoys there when they made their set.  We just said that was bullshit, as we had watched them come over and set on top of our gear, which of course they knew was true, so they just got busy.  They ended up having to haul our buoy aboard and untangle their rope and light gear from our buoy before giving it back over the side.  They were scraping our other buoys as they carefully backed out and then just headed far away into the darkness, which we were certainly glad to see.  I got some pictures of them bumping our gear about, but I think that posting them would spoil our celebration of a pretty fun time.

The delay caused by their goonmanship probably helped us, because our mid-rangers had a bit more time to soak before we got busy.

We pulled on the first one and it felt heavy.  As it came up, there was a race-around of brown and an incredible haul came into view.  We had 14 bugs, 9 of which were real nice legals.  We now had ten bugs in two pulls. 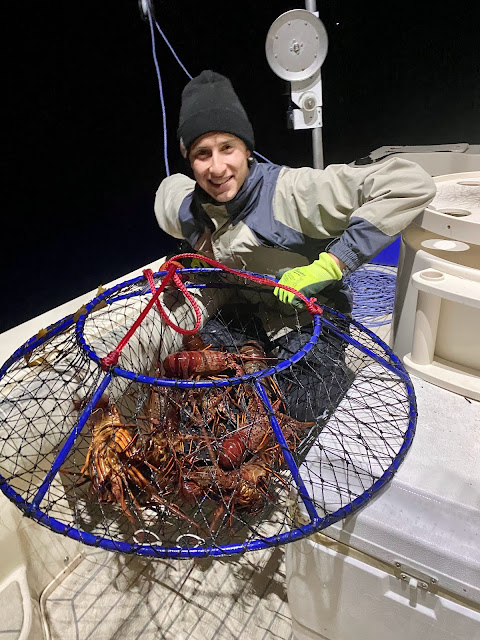 We made our way through the rest of the gear and every hoop was holding big lobster, along with a lot of sub-legals, especially in the shallows. 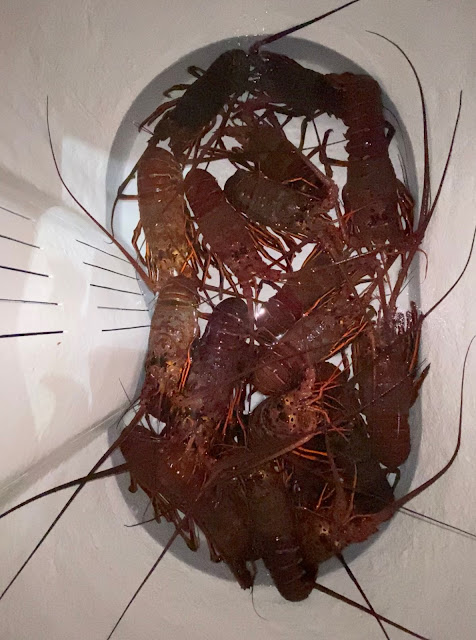 The tank was filled with 2-3 pounders in record time. We had our limit in the seventh pull and started recovering gear before UCLA started the game they should not have lost. We took 18 pulls to complete all our activity, dump our bait and stack gear for a nice ride home.

We threw back many legal lobster once again.  We were on the way home by 7:30 and tied up in Pedro an hour later, as the moon began to rise to the north.

Tommy and David paused for the Lobster Life photo before the cruel work of processing began. 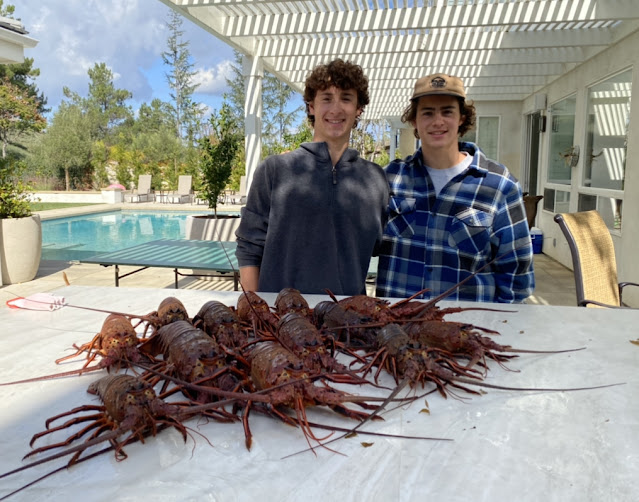 It was as nice a grade of lobster as we ever get. 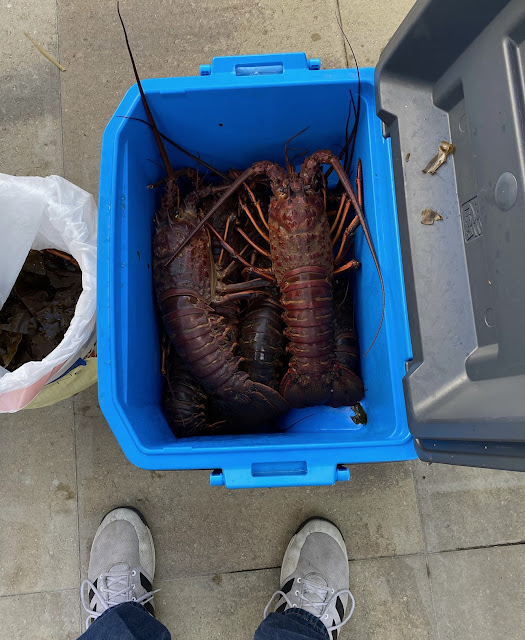 They gathered politely in the kitchen to await disassembly. 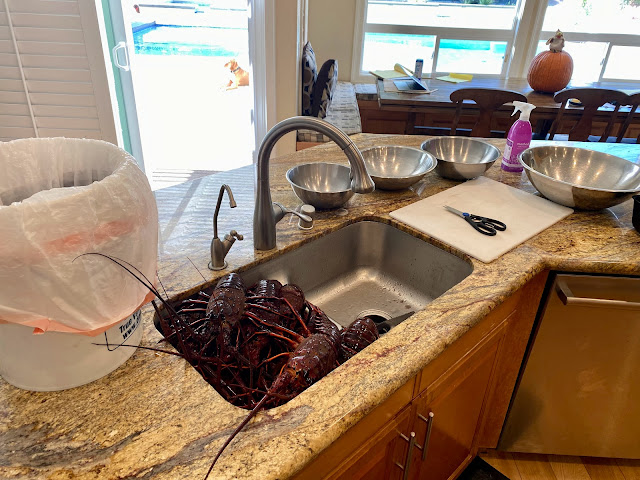 It was short, easy and stupidly fun.  We did not even get tired. I wish I could somehow bank what we returned to the sea, but life is not like that.

I have to get in one more shot of David on the best pull we have ever made in decades of doing this, because it is hard to see how it could get better. We just don't know how long this crawl we keep cashing in on is going to produce, but we do know that 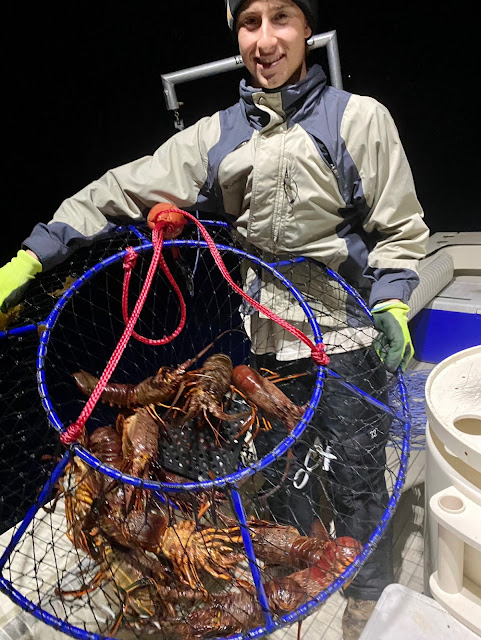