With barely time to recover from our successful trip on the Limitless, I was fortunate enough to be included on Forrest Werner’s annual birthday fishing trip.  One of his regular crew was in jail this time, so I got to go at the last minute when he could not make bail.


The crew on the Werner’s 41 foot Egg Harbor sportfisher included Forrest, his brother Frank, Moe, Gary, Jim and your reporter.  Fishing for local yellowfin had been productive for many this summer, although we have certainly logged some hours of looking/trolling without being interrupted by hooked fish.  The abundance of exotic piscatorial opportunity had also been well reported, but we decided to brave the crowds on Sunday of the Labor Day weekend to take another shot and celebrate Forrest’s birthday.


Conditions were a bit choppy and windy, as they have been in the mornings lately.  There was just a trace of the swell that had rolled through  earlier this week.  The water temp was 70 degrees in Dana Point Harbor, as we pulled out at 4:15 am to get two absolutely beautiful scoops of sardines at the bait barge.  There was a line of a dozen or so boats ahead of us, but it was great to get this kind of bait in the middle of such a big weekend.


We headed mostly south at about 8 knots with sea temps ranging between 72 and 73 degrees.  Many boats peeled off  in the darkness for the 267, where the action had been as hot as the water, including a report of a wahoo being caught.  We decided to look for signs of fish in between the high spots along an s-curving 180 heading.


As has recently been the case, the ocean gave us long sleeve weather in the darkness, but gradually gave way to scattered sunshine and flattening conditions as the morning matured.


The Werner’s boat, which I had never fished on before, is perfectly equipped for fishing tuna, with a two sided bait tank, outriggers, and most of all, a great system that Forrest and Frank have for trolling orchestrated and frequently changed-out patterns of jigs.  We trolled five rigs and often had deep diving Rapalas or Marauders on the flat-lined corners.  Forrest changed the pattern every 30 minutes, and we washed, coiled and dried the feathers as they came off their shift. Despite this disciplined and scientific approach, trolling proved ineffective, as has frequently been the case this season, as fish breaking water on the surface get shy around the jigs.


We started seeing a few terns among the gulls and shearwaters, but nothing came into our pattern.  There were small bits of kelp that were holding small bait, but nothing holding visible game fish.  There were all kinds of questionable radio fish, as well as radio combat, as boats competed for big paddies that were producing fish.  The tuna would come up briefly and foam on the bits of bait on the small kelps, but would sink out as we either dragged past the spot or hauled in the trollers and slid in with bait.  We stopped on several promising bird piles and threw bait, but got no takers, even with the chum cadence we laid down in drifts among the agitated white birds.


We saw many of the local landings’ sport boats striping the water from time to time as we fished the area inside the line between the 209 and the 181.  We were not fishing the high spots as much as we were chasing bird schools.


We got into an area about 13 to 15 miles south of Dana when the fish started coming up seriously.  We found a few spots to drift and throw chum in a fairly large area with a few floating kelps. We were fishing a kelp that was also spotted by the Enterprise, San Mateo and Dana Pride, all of which came on station and started spending sardines.  The addition of their chum lines brought more fish up in a fairly wide patch of blue water. The tuna kept popping up under the terns circulating in an area that was several acres. A hammerhead slashed its way into the edge of this zone of activity.  The appearance of this fish, as much as anything else, has been a consistent harbinger of biting yellowfin for us recently.


We started getting plunker bites on the long soak when they came through our zone. The fish did not want to bite our heavier line, but we did get bit on the 20 pound fluro. We managed to boat 5, all but one of which were in the 22 to 30 pound range.  This grade of fish gave us some great action on a late afternoon bite that made the trip.  We busted off more that we should have, but the fish were pretty feisty. 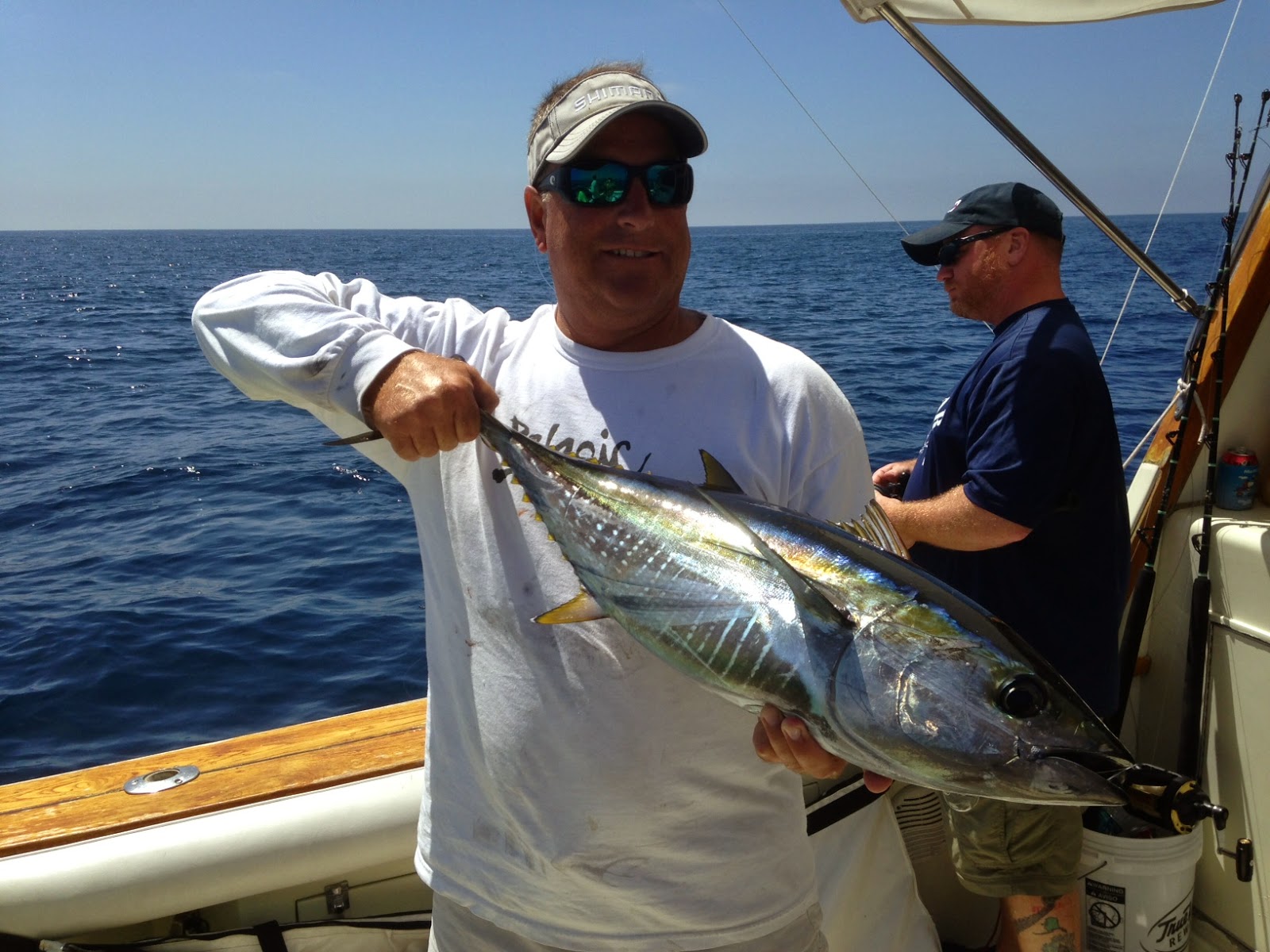 Forrest was on the gaff for all five fish 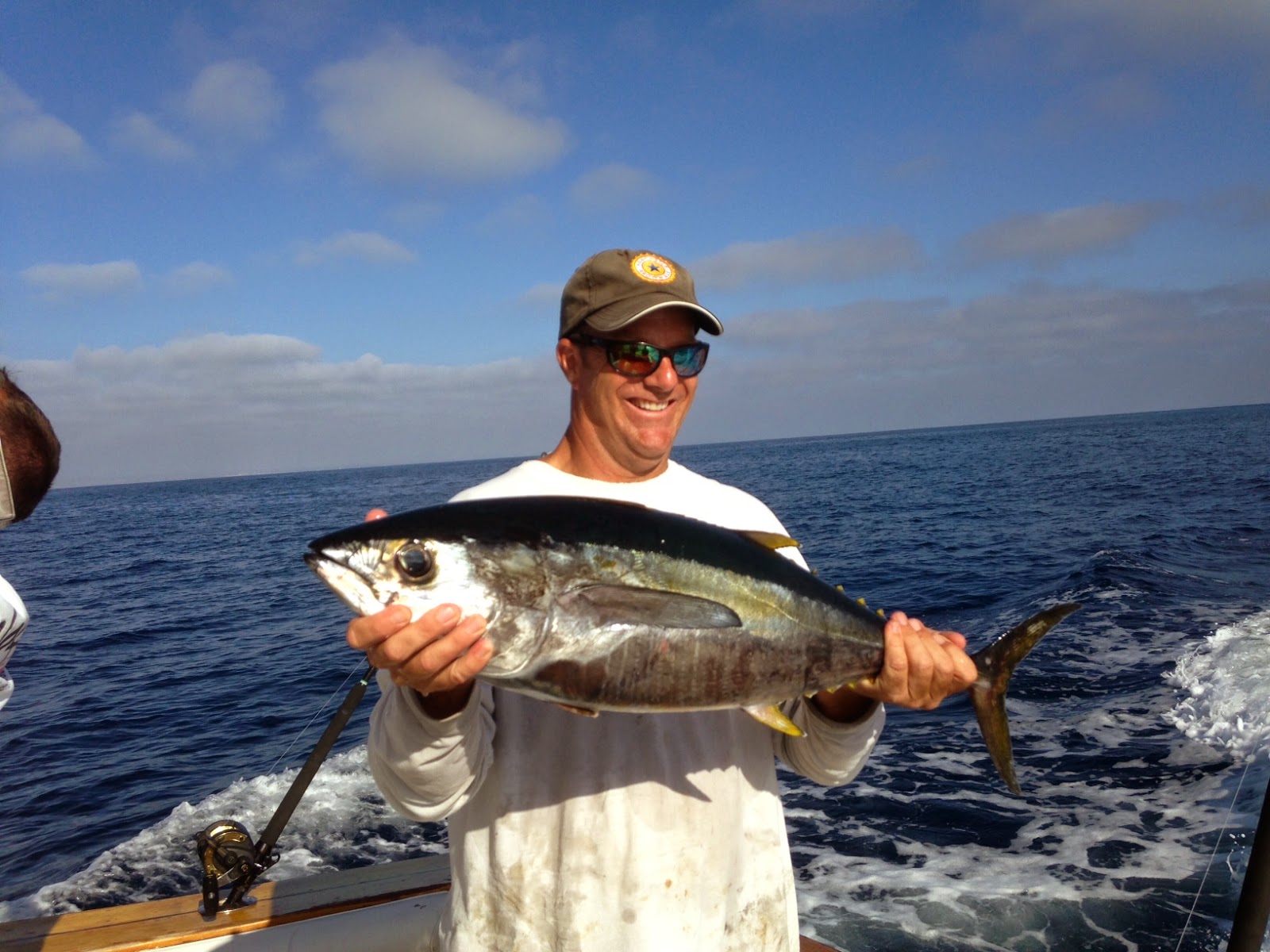 
We had planned to come in early, but had to stay a bit later when we finally got the bite we had been searching for on a nice, but manageable, grade of fish. 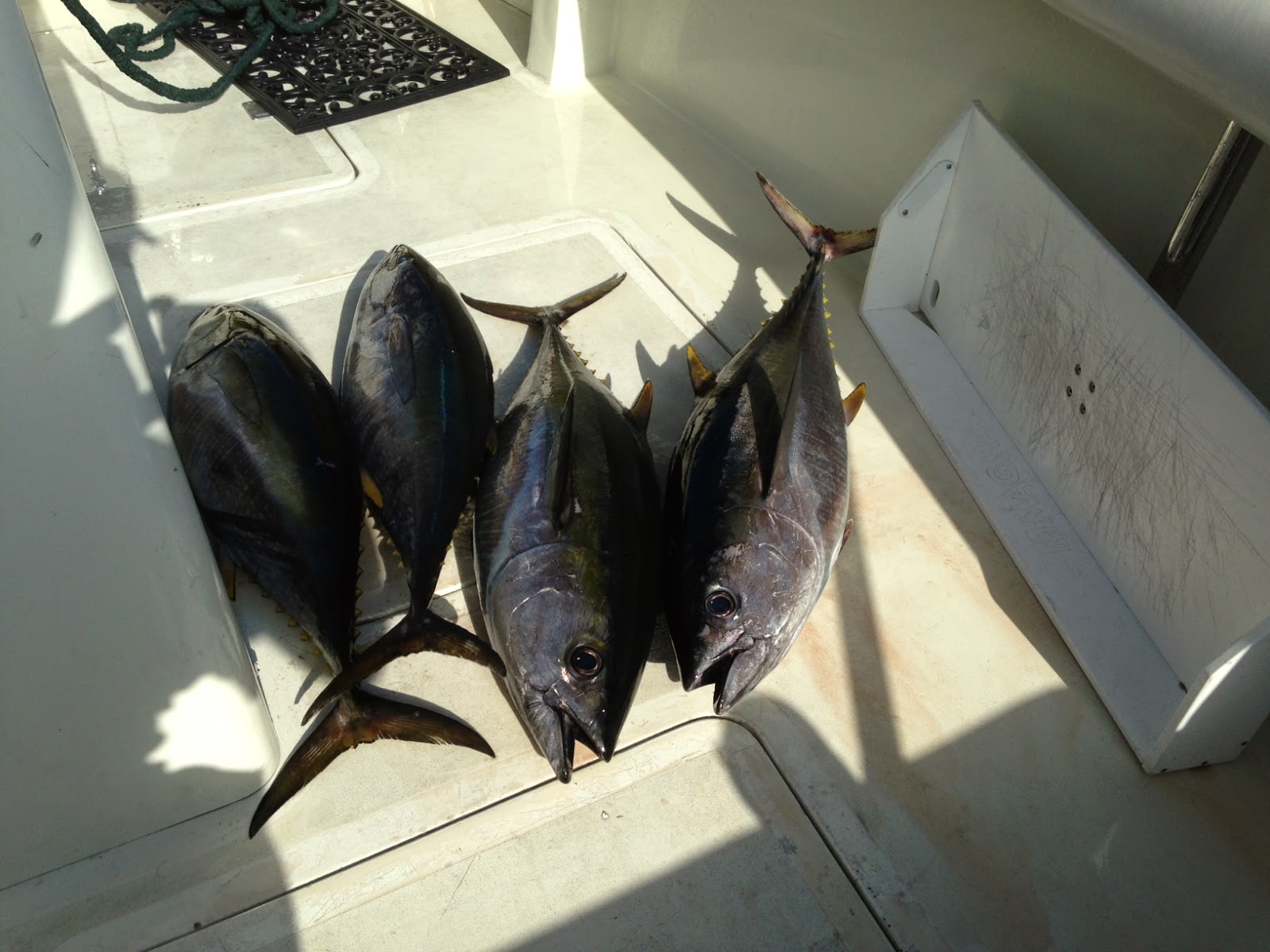 We left the area with the fish biting, put out the marlin jigs and cut up the fish on the gentle ride home. Autopsies revealed that these fish were stuffed with sardines from the chum that kept them around the fleet. 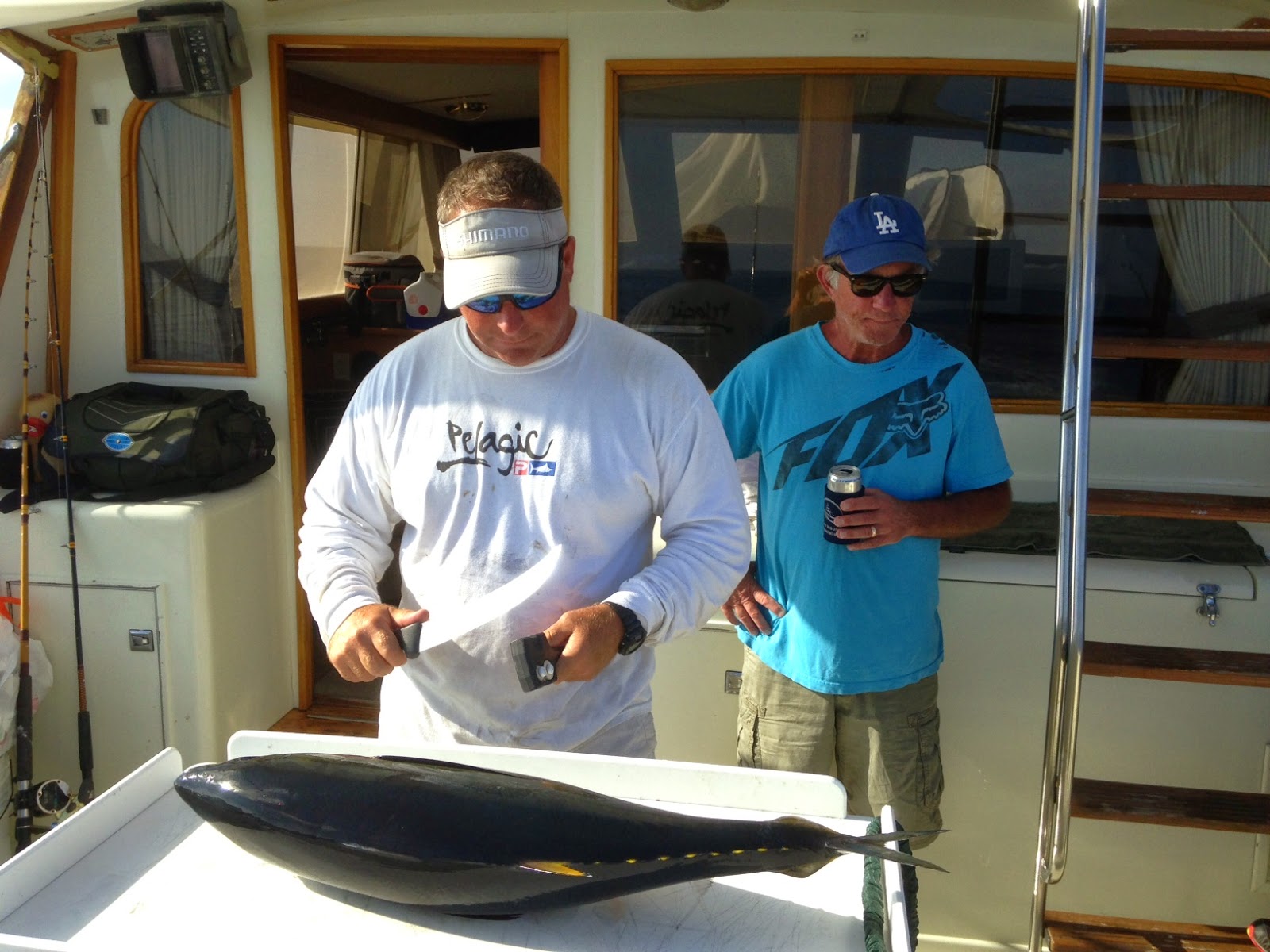 Forrest makes ready to cut fish under the watchful supervision of Gary.
We were back and cleaned up in to Dana by sunset. 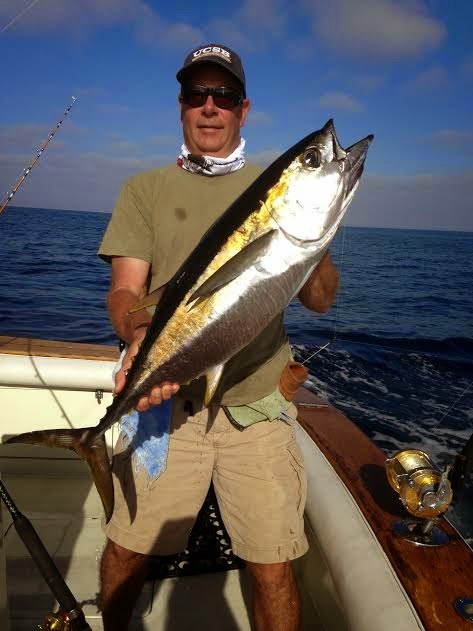 These fish are all over the place right now.  Sportboats bristling rent rods like porcupines are boating big scores of 20 to 30 pound yellowfin tuna close enough to shore to make out  the metallic flashes of cars on the freeway near Oceanside, so it is about as good as it gets for us south county anglers right now.  This bite looks pretty strong in conditions that may last through October, but I am getting in as many licks as I can right now, because, as you may know,


These are the Days.