We got a chance to get out with Tom Patierno on the Limitless on Tuesday, August 26th. 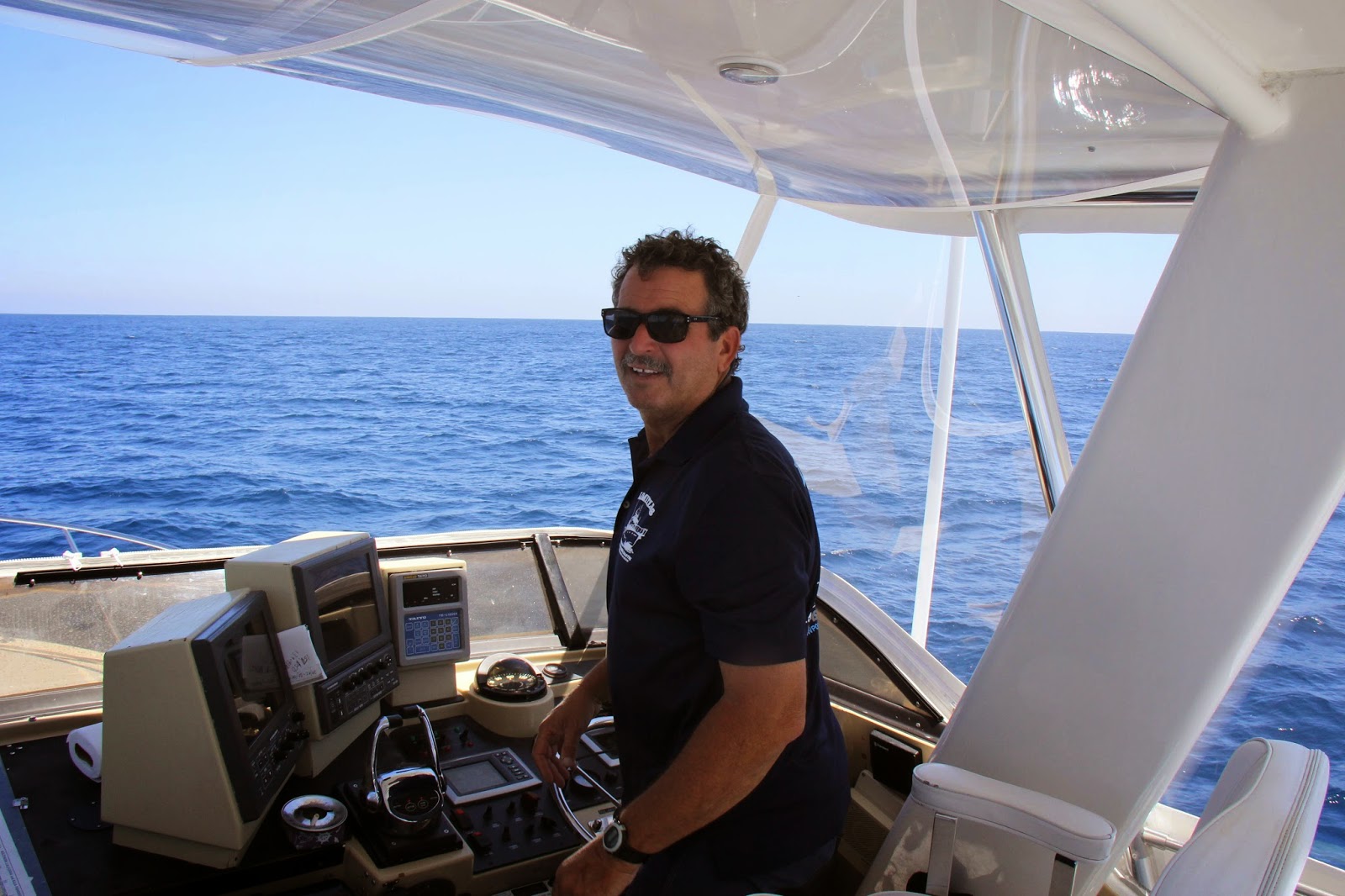 Our crew consisted of Erik, John, Marlon, Rob and your reporter.  Conditions had been excellent, with lots of yellowfin along the border in 74 degree water.  We left Dana Landing at ten, headed over to the bait barge where Tom carefully selected and the crew gently handled our premium sardines.


We motored out beneath a waxing new moon, with forecasts of encountering the leading edge of a hurricane swell on the outside.  Conditions were pretty choppy on the way out. We strung gear and bunked down in our restless anticipation.  We bounced along toward our destiny for the next few hours amidst the twinkling of the outbound fleet.


We got out on deck and started fishing in the darkness, with fly lined sardines, deep jig drops and groggy dreams of nocturnal bluefin and opah.  Assisted by caffeine, we gradually gained our senses as the shadows of gray light became discernible.


We got no love at this spot amidst the loitering fleet in what were foreboding conditions, with more windchop than you want to see before sunrise.  As the gray gave way to dawn, the fleet started firing up and trolling away, like searching spokes growing from a lumpy hub.


We put out our rigs and it was not that long before Tom called out to bring them in as we caught up with some fluttering white terns.  Tom gave us the go sign to toss out fly lined baits as we slid up to the marks he had on sonar.


It was pretty instant.  I got the first hookup on the spinning reel I was committed to trying out.  It is an Okuma Cedros, packed with 65 # spectra and slung beneath a Calstar 20-40 spinning rod.  It is easy to cast, has big drags and is geared up to really put big pressure on fish.  I was seeing what I could do with it while trying to make sure I did not lose the first hook up.  I did not have to worry as everyone else hooked up in the next three minutes.  We all caught fish and I was able to make short work of two 15 to 20 pound yellowfin on my new grinder.  We also saw a hammerhead in this zone, which though normally a rare occurrence, has become more common in this area over the past couple weeks. 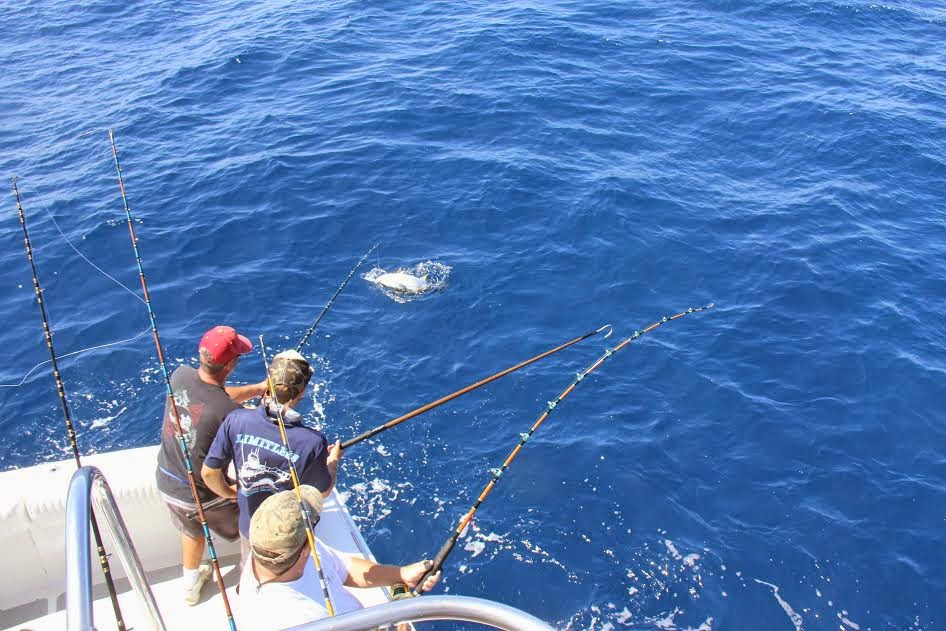 The fish left and we were soon on the troll as we chased down another bird pile.  We had a short stop during which the grinder bagged one of two more tuna before we stroked out to another bird pile in the distance.  We stopped, threw bait and all got a good flurry of a smaller grade of yellowfin in the 12 to 15 pound range.  After we each bagged a couple of these fish, we drove away to look for a bigger fish, as we each had several and it was barely 7 am.  We had not gone far enough to do anything except re-rig some of the broken off outfits we had been rotating through on the first few stops before we hit the jackpot.


Deckhand Christian spotted a distant tornado of furious terns working above what turned out to be another hammerhead.  Tom let us know that the sonar picture looked promising and we made ready at the rail as our dangerous machine closed in on the spot. 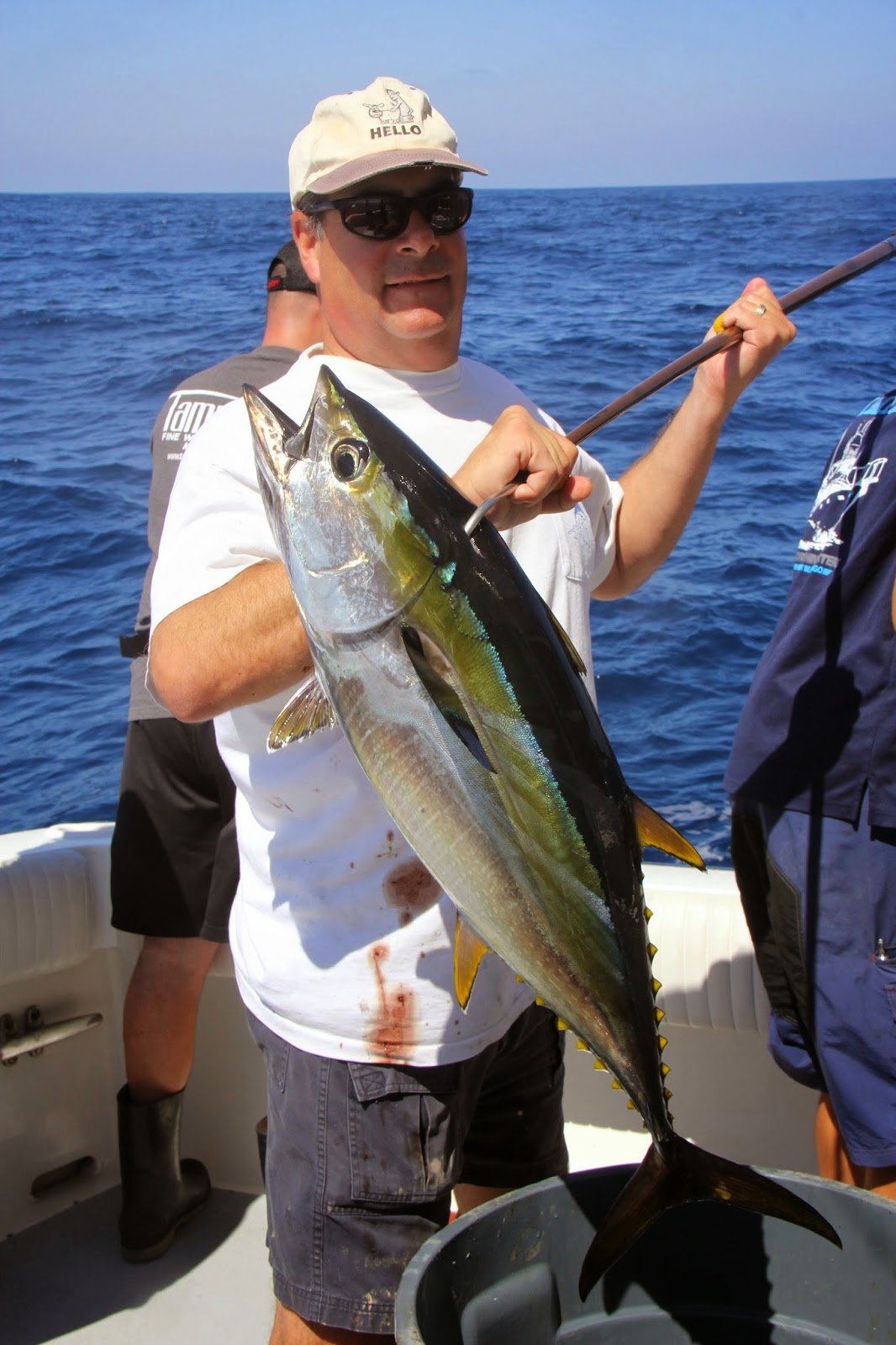 The bite was instantly stupid.  We had fish blow up on our baits while we were still sliding in.  Several times, all of us were hooked up and you had to stall your fish to avoid getting tangled in colliding orbits of circle-of-death tuna flashing color at the corners.

We pulled on a bigger grade of 18 to 25 pound fish on a fish-per-cast bite.  The lifespan for each bait was seconds from splashdown.  Early pandemonium gave way to a sublime hilarity as we realized these fish wanted to stay, which they did until we left them.  They bit straight 50 and I caught fish on every rig I brought, mostly settling on my favorite old Trueline, with fluoro tipped 20 pound Ande above 65 pound spectra on a Trinidad 16 reel.  Several times I slipped up the rail to take my time on fatiguing these pretty fish from the serene solitude of the bow pulpit.


At nine am, we had 40 fish in the 34 degree salt water chiller and were releasing any  fish that did not seem worthy or damaged  The wind and chop had died off, leaving us with a building and determined swell from the south that started to give us a cadenced change in elevation as sets passed under the boat. Tom suggested we might want to leave some room on our dance cards for a shot at the bluefin that had been reported in the area of the 43.  We needed a break anyway.


We put out the marlin jigs and dragged toward the 43, which gave us time to re-string, heat up some machaca burritos Erik scored, and head slap each others’ helmets for the lucky morning we were experiencing.


We passed over a few empty paddies on way to the 43, where one sport boat was on the anchor.  We saw a couple of bird piles and headed toward the biggest one.  Tom yelled down that the meter was showing up and down fish.  John strung up with a rubber banded torpedo sinker to drop down 150 feet on what we hoped were bluefin. The rest of us tossed out fly lines on Tom’s signal.  Right away we came under attack.  John almost got pulled to the bottom as what turned out to be a big yellowfin slammed his suspended bait while the reel was in gear. 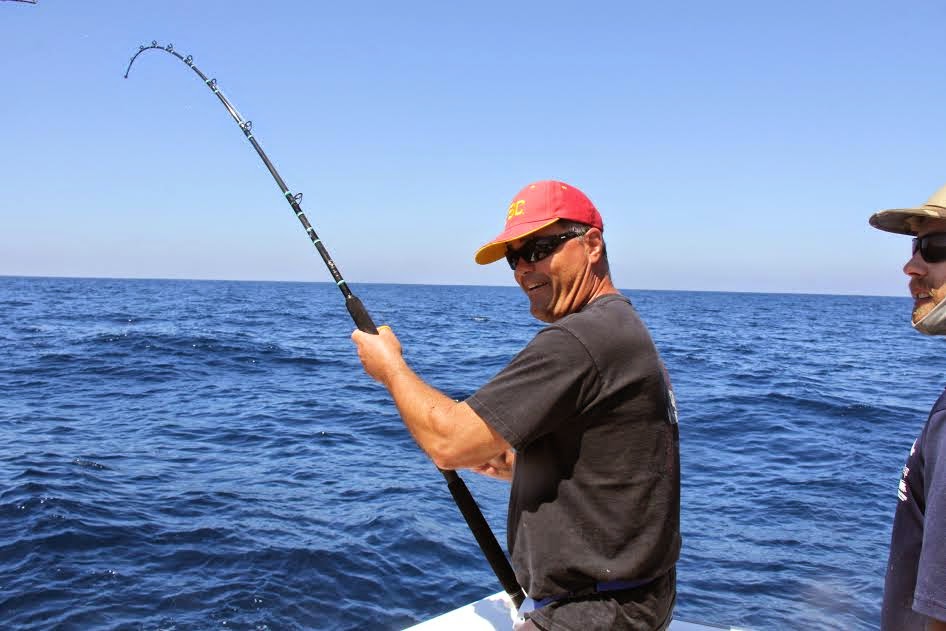 We all got picked up in turn on another spot of fish that would not leave us.  These fish were marginally, but consistently larger than what we had been catching earlier.  We plugged our 50 fish limit and then spent the next several hours catching and releasing fish we wished we could keep.  I found myself wishing I could just warehouse these easy hookups to disburse on more desperate days.  We spread out, took our time reeling and brought them up to flutter along as Christian backed out the hooks in the corner of their mouths. 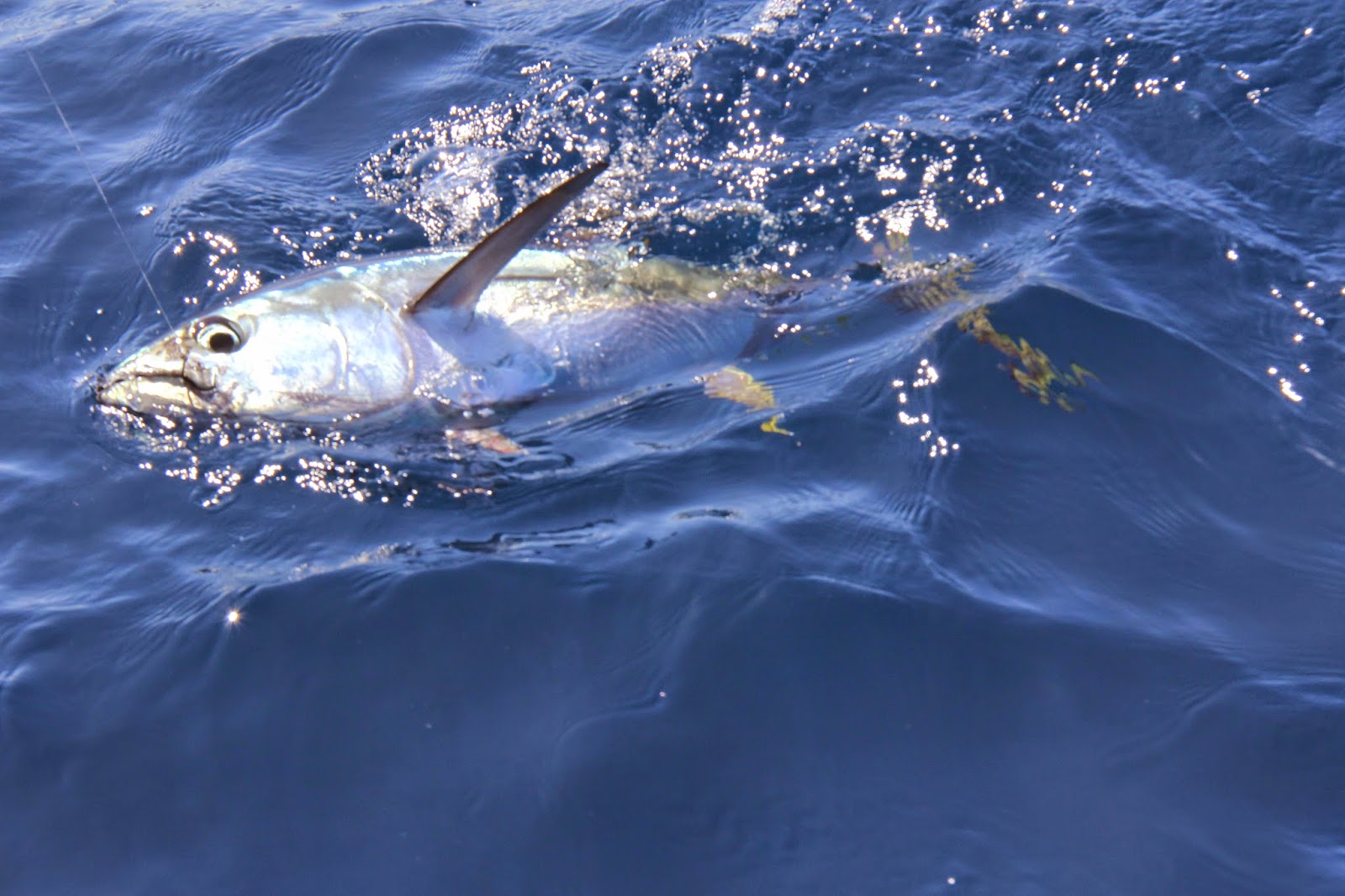 The bite was steady, with few spells where we did not have at least one hooked up.  People began to take food and beverage breaks, but we always kept an angler or two on duty.  The fish would not leave us, so we left them to put out marlin jigs and look for paddies on the way in.  The swell was mounting and fun, as it pushed us back toward home like we were in a baby carriage.  After catching up on our neglected beer consumption quota, we all snuck below for transcendental naps. 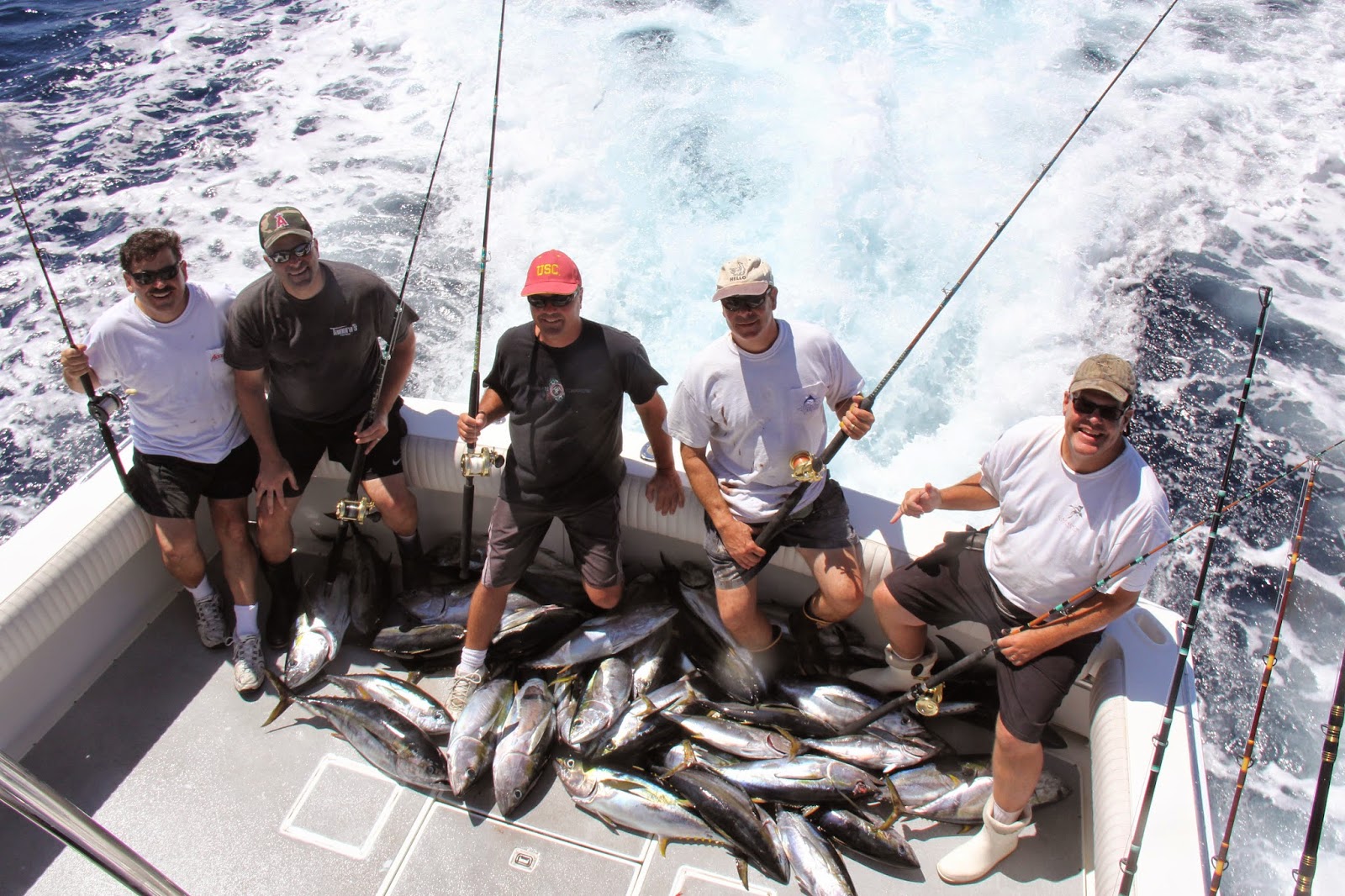 We picked up the jigs and roared the last few miles into Mission Bay in perfect weather and swells that would prove to be the vanguard of the most epic surf to hit our beaches in years.  The crew did a great job (as always) in cutting up and bagging our fish, which remained chilling at 34 degrees from within minutes of coming over the rail to the transfer to our ice chests.  The treatment of the catch is an art on this boat, ensuring that your dining experience, whether of the raw or cooked, will be as close to perfect as possible.  Ours was, and we are still in the midst of neighbor and friend banzai sushi sessions and BBQs.


We rolled up to the fuel dock before 5 pm, happy, sober and well rested.  I noticed a barge occupied by a surly group of cigarette smoking chimps was tied up to an adjacent finger of the dock, but I was too ecstatic about our good fortune to really evaluate them. We took turns taking loads in carts up to the parking lot and buying more ice to pack up the catch we divided up into the ice chests we each had in our trucks


The only downer about this trip, of which I was unaware as I cheerfully drove home from a perfect trip, was that my wallet, which had been in the outer pocket of my back pack, ended up in the hands of criminals.  I was sure I had misplaced it, but many hours of frantically searching everywhere turned up nothing.  I called in my card companies.  Most showed no activities, except one, which had multiple fraud purchases from service stations in Downey and Bellflower, which meant that I could stop looking and blaming early dementia for this loss.


This is a major hassle, obviously, and I wanted to avoid it.  I began recreating the scenario at the fuel dock and trying to place the faces that might seem retrospectively suspicious.  I got a call from the MasterCard people that a very hairy man had used my driver’s license to successfully pass himself off as me at a fruit stand, but had “scampered” away when a an animal control vehicle pulled into the adjacent lot.  It hit me like a thunderbolt – It was those barge monkeys!


I called one of my friends at the FBI to report my suspicions.  They were way ahead of me.  “Your cash is gone” he said matter-of-factly, “but we have a pretty good idea that those apes (they are not technically monkeys, but I tend to lump them all together when I run into extremists) are part of a splinter faction attending the Dinner to Honor Hamas being hosted by  former president Jimmy Carter at the Montage.”


The dead giveaway was that the name of his “Habitat for Humanity” sponsorship hats had been subtly altered to “Pads for Primates”.  They claimed that they were just trying to be more inclusive and suggested that primates included humans, so it was cool.  It definitely was not cool and both the FBI and Homeland security agreed with me. They humored me by letting me come with them on the raid.  Even as Carter took to the podium to suggest to the Arab-costumed crowd that these hairy reasoners be given their own habitat, the feds closed in.


The apes knew the jig was up and they came out swinging.  There were dressed in the flowing robes of Arab Gorilla garb, so it was hard to tell them from the rest of the crowd until they started to take up defensive positions in that peculiar knuckle-dragging gate.  They all reached for cell phones (which could have been detonators) and that was all the provocation our boys needed to hose them down with the belt fed machine guns that all federal agents carry under their coats.  None of the 12 monkeys that were discovered lived more than 5 more seconds.  This was a bummer for me, as I was hoping that some would be taken alive and water boarded, so they could be coerced into saying what they did with my wallet.  When I expressed this to the agent, he disdainfully blew into the locked-open chamber of his warm gun to clear out the smoke. Then he slowly looked out of the side of his face at me and said “You can never talk or negotiate with them no matter what you try-- They’re not human.”


Now I know to keep a tight grip on my gear around sea monkeys and throw bait on hammerheads, but now that those apes are dead, I have to go stand in line at the DMV.