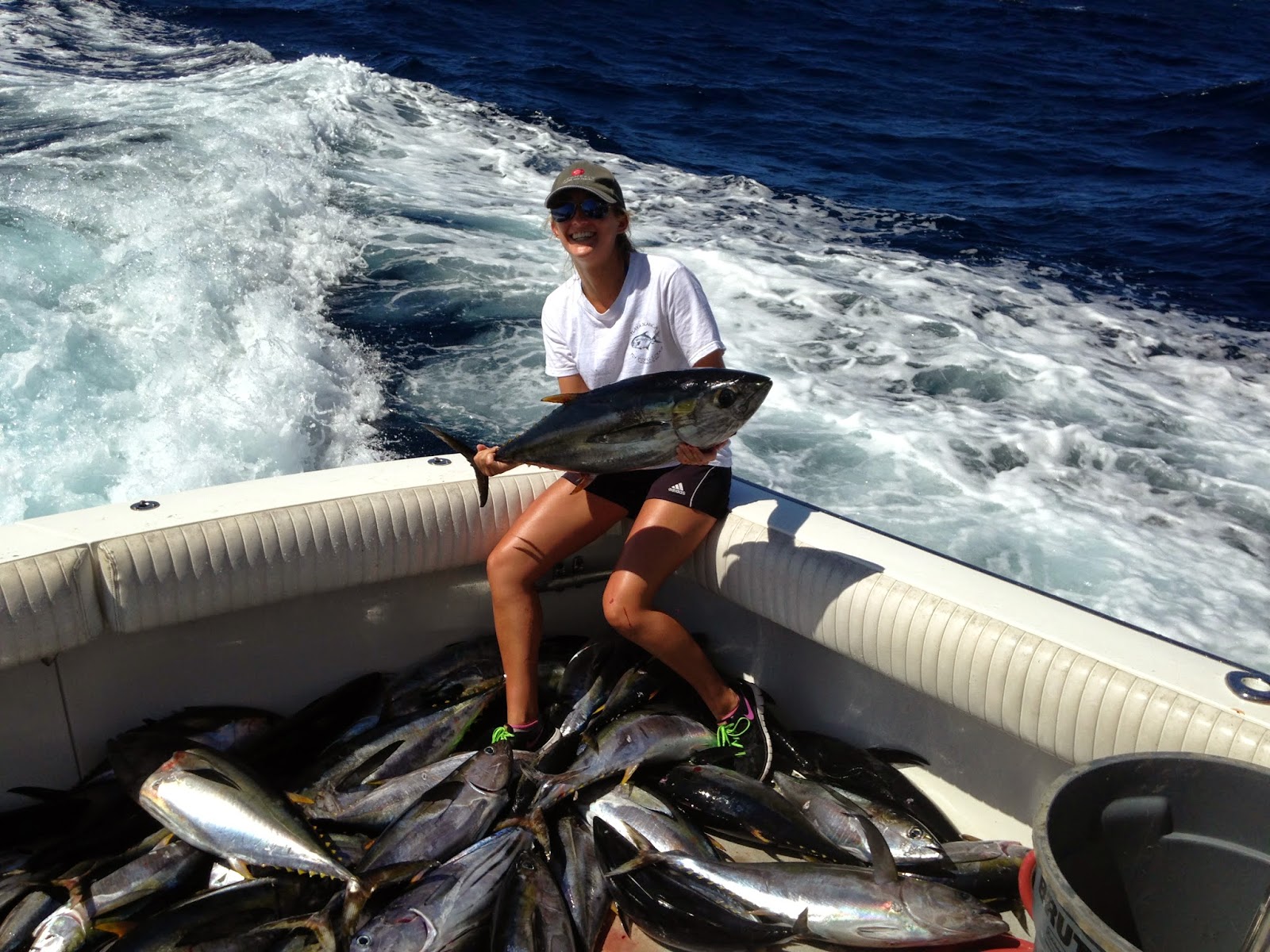 On September 16, 2014, your reporter was once again a lucky guest on board Tom Patierno’s 44 Pacifica “Limitless.”
Our charter master, who is of Spanish Basque extraction and a long time family friend, was Soy Latte.  Soy’s parents grew up in Spain and moved across the street from us in Long Beach when they first immigrated.  They had the foresight to name him for a beverage that has now been vocalized by millions of baristas across the left coast.  The literal translation of his name is “I am an expensive caffeinated drink invariably ordered by pretentiously health conscious women.”
Soy, who normally fishes using brightly colored hand tied zippers from the land of his ancestors, brought three of his children, as well as his salmon fishing buddy, Monte Crisco. Monte insisted on being called “MC” because of his instinctive sense of rhythm and tendency to break into a frenzied, baggy-pants dance routine whenever he hooked a fish, or thought he was about to. 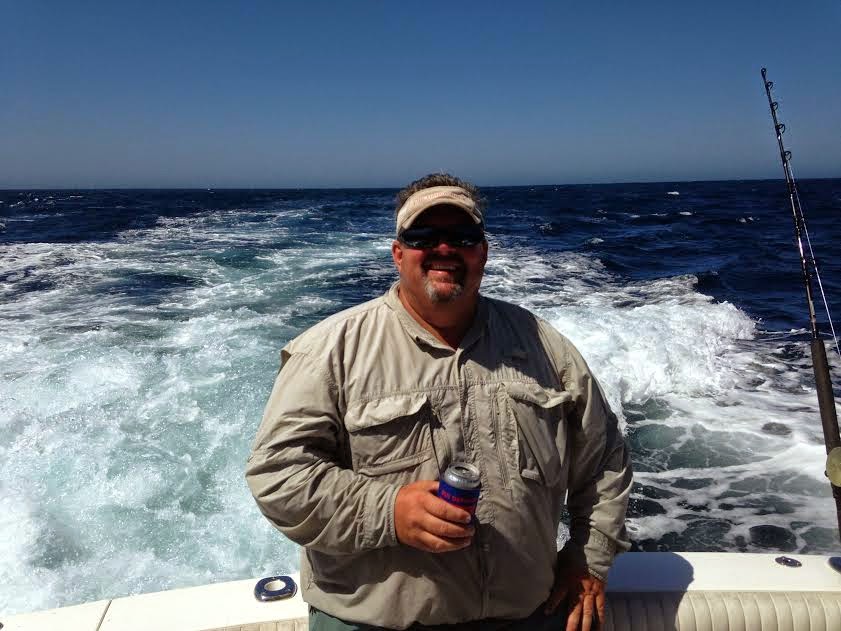 Soy has tried for years to get people to nickname him “Swifty” without any real success.  To humor Soy and thank him for including me on this day on the water, I will call him by that name for the duration of this report. 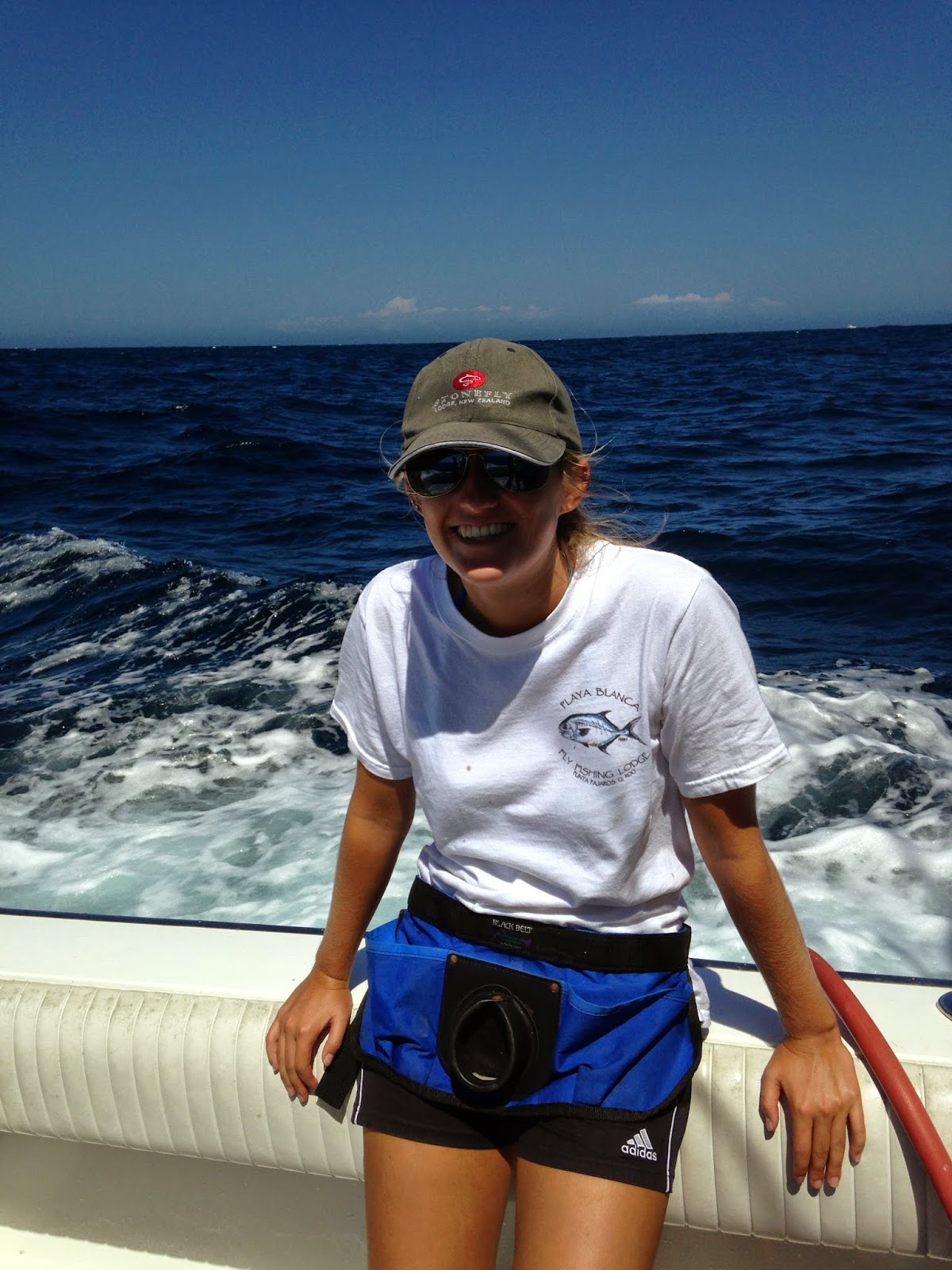 The last time I saw Swifty’s daughter Pantera, she was a little kid.  Pantera is not only a capable angler, but has grown into a beautiful young graduate student living in San Diego.  Swifty gave her this exotic name because he was at the San Diego Zoo, looking at the “Big Cat” exhibit, when he decided to call his wife, who was at the hospital giving birth to their daughter.  Swifty only had enough change for a short conversation, and his young bride was exhausted from a long labor – “Good job, Babe – Let’s name her Pantera, because I know she’ll be a wildcat just like you.”

Swifty’s other two sons are half twins, born on the same  day to different mothers.  Swifty was home watching a re-run of “Battle of the Bulge”, which features a star-studded cast in a classic movie about the German counter-offensive in the Ardennes during World War ll.  Swifty did not have to use a pay phone this time.  He called the hospitals with congratulations and to telephonically name his newborn sons.


Luger, who is a bit taller and does not look much like his half-twin Mauser, went to college in Boulder before becoming a CPA and opening a highly successful business manufacturing and telemarketing a high protein beverage used to feed captive, or rescued marine mammals, especially sea monkeys. 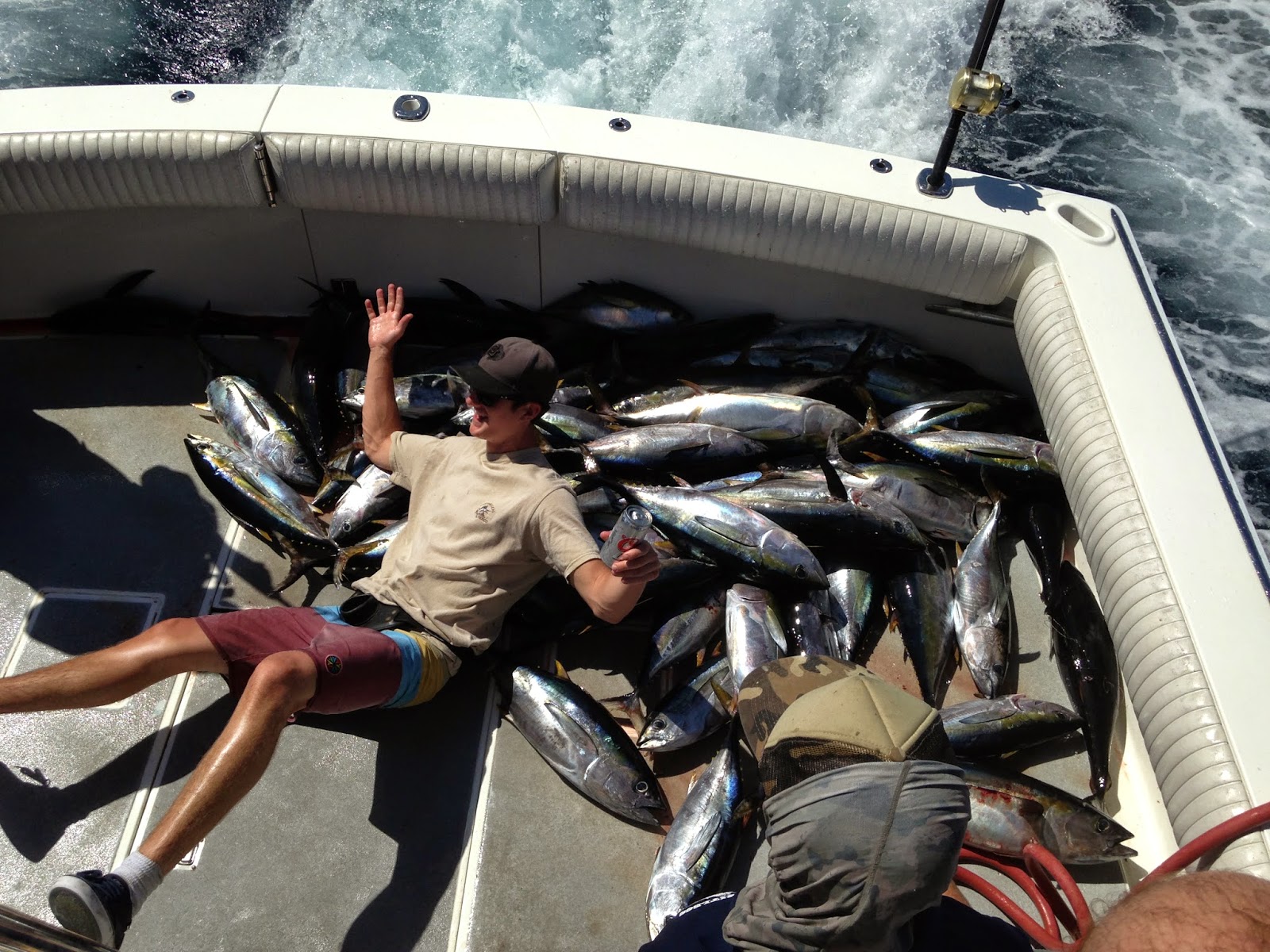 Mauser, who is a mechanical engineer, has turned an abandoned warehouse in San Bernardino into a humming factory that mass-produces air sickness bags for most of the national market, as well as making custom six and a half foot black plastic zipper bags for some of the Asian airline companies. 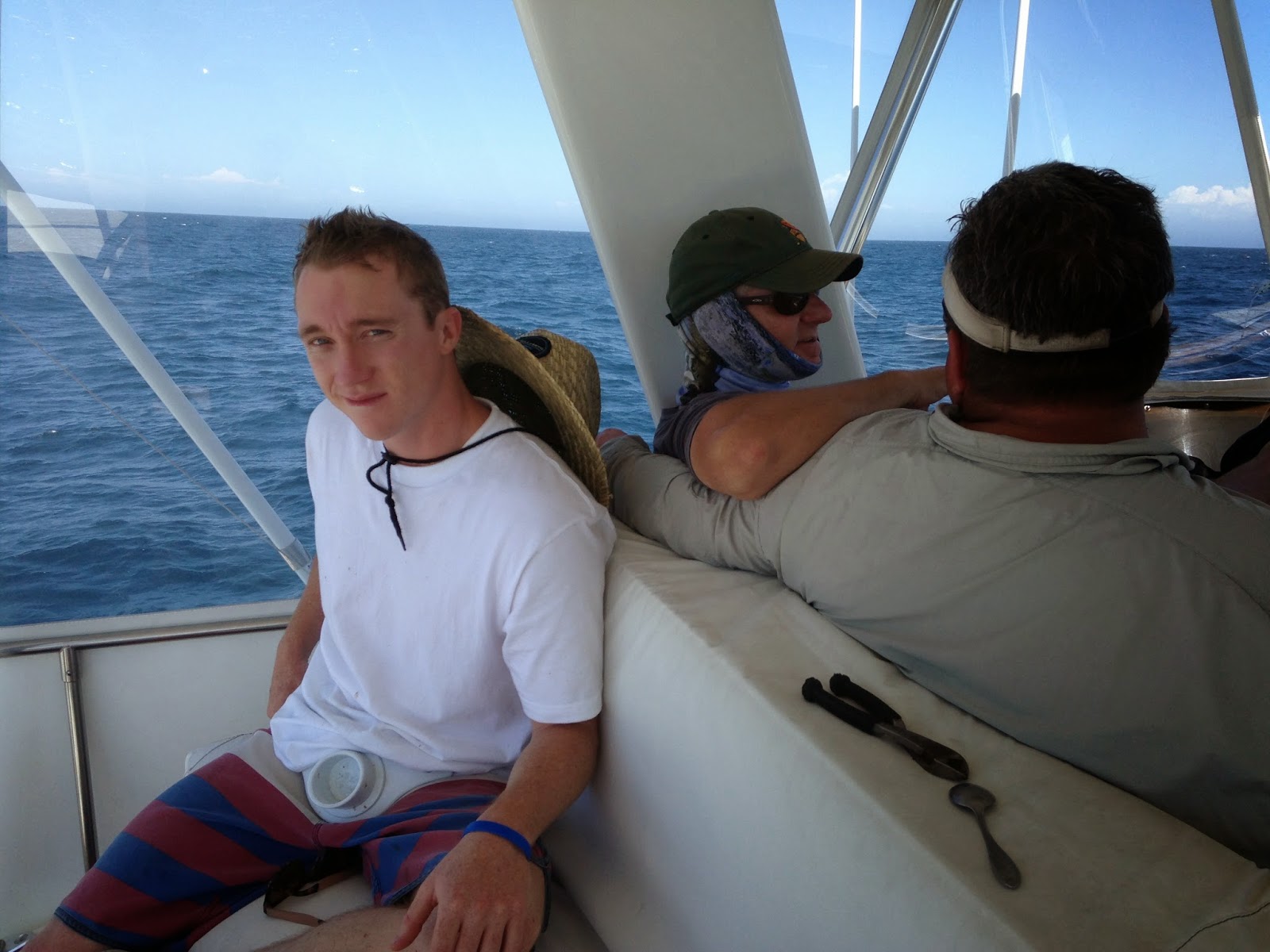 We were chased down to San Diego by weather generated by the edge of a Mexican hurricane, with scattered cells of thunder, lightning and little rainbows.  We all rendezvoused at the Dana Landing Marina right at the end of a tropical downpour, complete with heavy thunder and lightning strikes to the flag pole near the ramp.


We were greeted and helped aboard at 8 pm by Tom, his deckhand Christian and second skipper Paul Nosferatu, who runs the boat at night and then retreats into his coffin once daylight breaks.


We baited up with many gentle passes of perfect sardines and headed up swell toward the rumors-behind-the-news at a spot just inside of the U.S. Navy’s private parcel of maritime warfare, San Clemente island.   The water temperature on the way out was 74 in the harbor and 75 plus once we got outside. We were tight on the front side near Pyramid Head.


After rigging up for tuna with 20# fluorocarbon leaders, rubber core sinkers and 2/0 hooks, I downed a few beers with our team.  It was then time to retire to a bouncy spot in the upper bunk in the bow cabin, where my primary goal was to remain in place and avoid pitching out when the bow and bunk dropped out from under me every once in a while.


As I struggled to sleep amidst fitful dreams of hammerheads and atomic backlashes, Swifty and MC guzzled moonshine on the deck.  Eventually naked except for the lifejackets skipper Paul made them put on in the pitching darkness; they sang and danced like prancing goat boys to the Bee Gees until almost 3 am, when they finally put their clothes back on and passed out in the salon.


After we arrived on station and began a steady drift in the current I woke up for good, grabbed some coffee and took a look around,  Every boat in the southern California fishing fleet, including some long range boats, seemed to be drifting with us, as witnessed by acres of bobbing lights.


I climbed the ladder to check in with Paul, looked down and saw a big hammerhead make a pass through the lights.  This was a sure sign we were in the zone, so I put out a bait, even though it was at least an hour before gray light would begin.


I got picked up and set the hook.  After a hard initial run, the hook pulled in a series of violent shakes.  Hammerhead?  I tossed out a fresh one and was picked up again.  This time it was the hammerhead and he made short work of my gear before flashing away from the boat.  I grabbed another rod from the rack, twisted on a sinker, and tossed out.  I was bit again within seconds and this time it stuck, as line peeled off against the drag.


I yelled for all the sleepers to get up on deck and get at it.  One by one, our sleepy band staggered out on the deck and blinked in the lights.  The rods they were issued went bendo as soon as the baits hit the water.


All six of us were hooked up in the confusion created by a combination of darkness and recently interrupted slumber.  Lines crossed and fish were burned off, but were quickly replaced by new rigs and singing reels as the tuna swarmed the boat.  Everyone boated at least one before total darkness gave way to gray and we drifted off the fish.


As the first colors of the morning became detectable, we saw the fleet begin to mill around .  We joined them in a slow search for sonar fish, with one cedar plug dragging behind us to keep the fish honest. 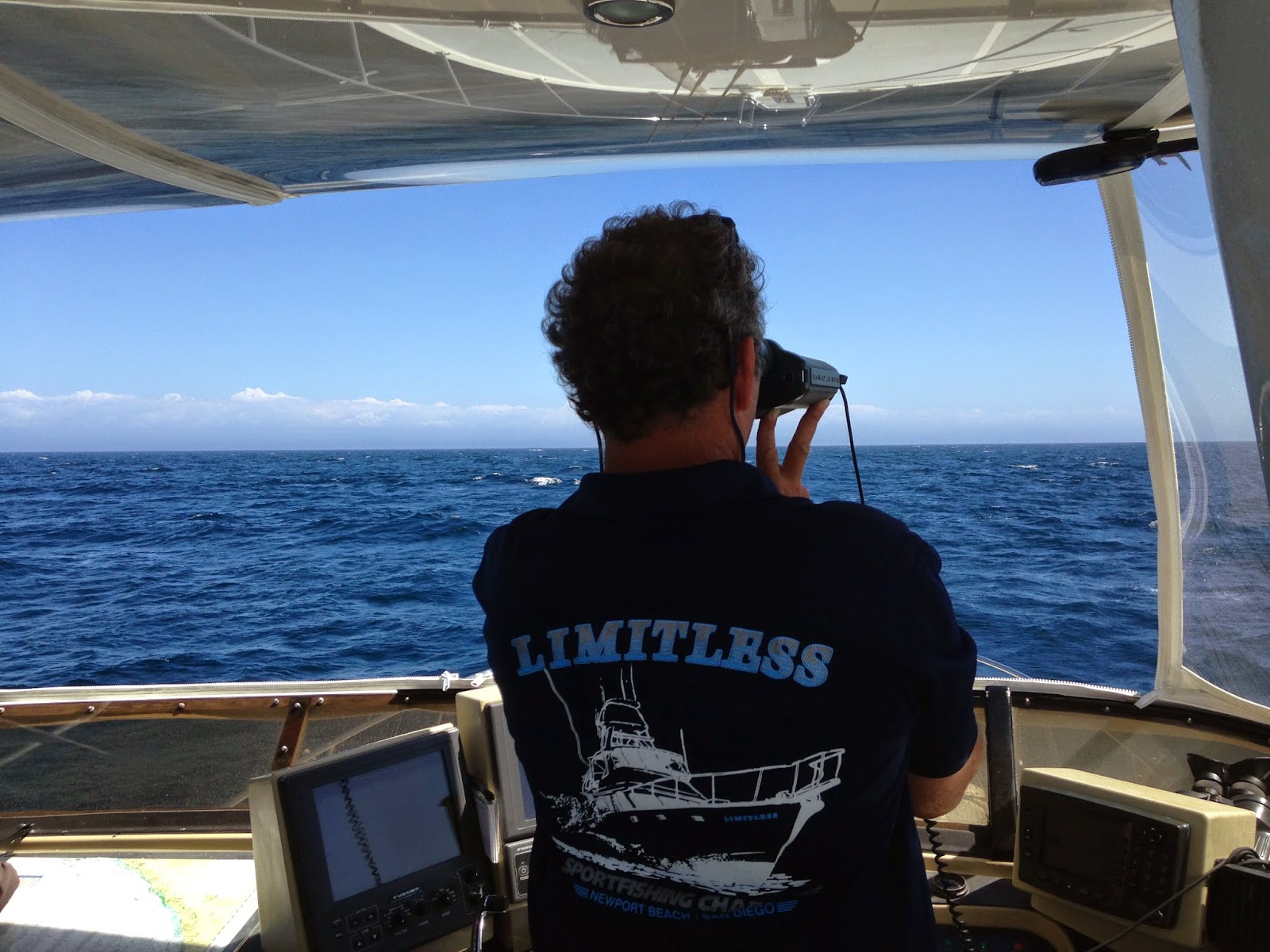 Tom found a huge spot of tuna and we put out the baits as we slid over them.  It was instant hysteria as fish hit our sinkered baits immediately.  All six of us were solidly wired again as the rising sun creased the horizon.  Everybody was screaming like confederate soldiers.


Then the radio crackled out a message from the U. S. Navy to all vessels fishing the area – “Get out now.”  When the Navy says now, they don’t mean later, because they need to blow up stuff on a very specific timetable.  Helicopters buzzed the angling fleet, along with red launches full of sailors armed with bullhorns.  “Reel in and get out” was what they thought they were saying.  I thought I heard them say “grab your 40 pound outfit and jack down your drag for another one,” which is what I did.  Twice.  The bite was so hot they bit straight 40 eight feet from the swim step.  I just had to bulldog two more before we fled as solid a bite as I have seen in what has been a very good season.


We had 21 tuna in the hold as we popped our breakfast beers and started to re-tie all the rigs we broke off in the melee. The fleet, dazed by the gut punch of this abrupt termination of a white hot bite, scattered in all directions way from the island.  Thanks Obama.


We put out a marlin jig and a cedar plug and began searching for kelp paddies.  As we fueled up on breakfast sandwiches, we drove past boats in the distance that were stopped on paddies.  We stopped on a couple we found and drew non-stop action from small yellowtail that we hoped would give way to dorado or yellowfin.  After spending bait on catch-and-release yellowtail that did not mutate into something greater, we would motor far enough away to put out the trolling rigs without drawing strikes from firecracker yellows. 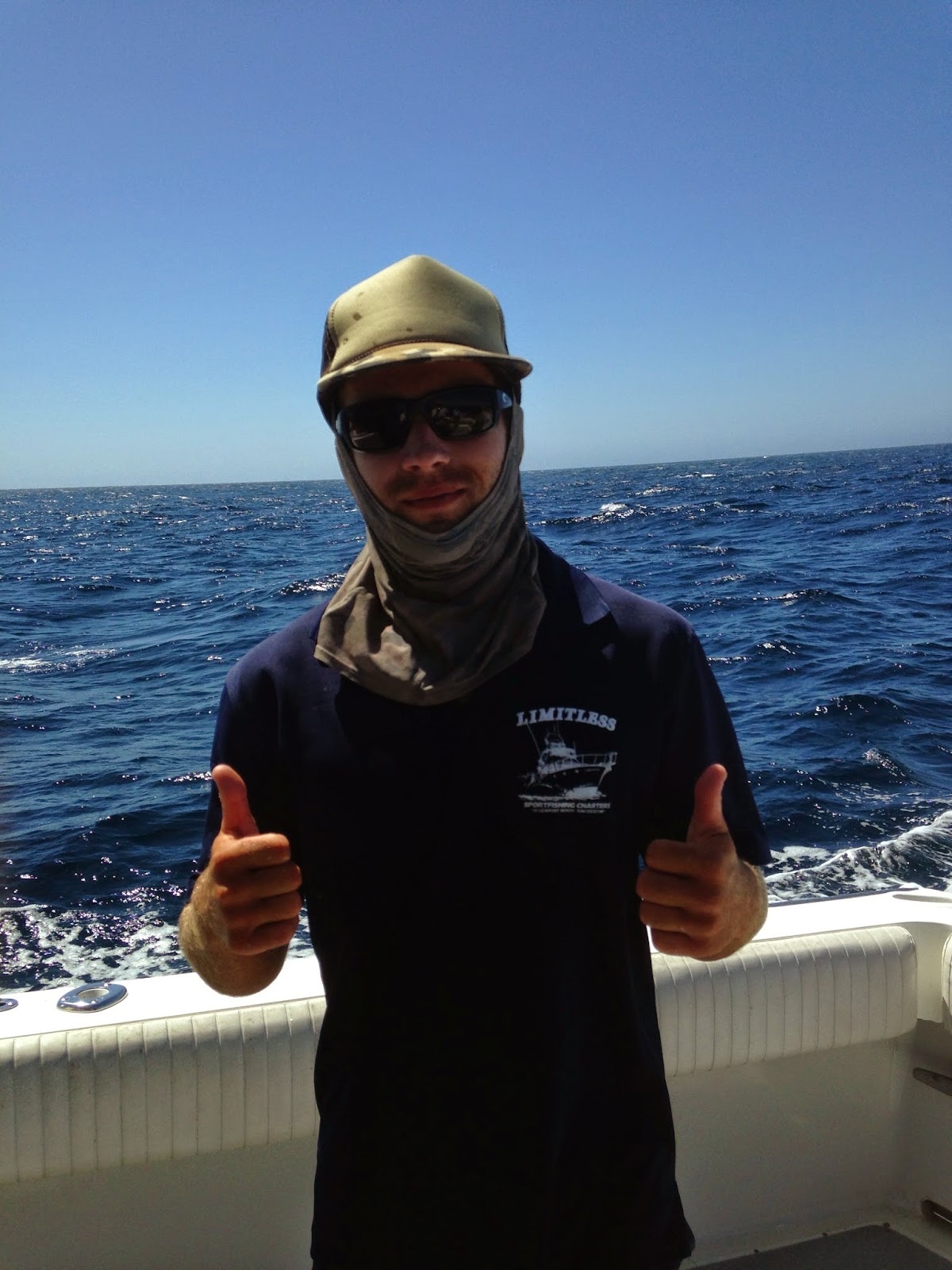 Christian gives the all good sign after finding the magic paddy
We headed toward the 289 and were in that general area when Christian found a paddy from the crow’s nest.  We began our drift and pulled a couple of yellows off the upswell side.  As we slid away from the kelp, we got sonar marks and the tuna charged the boat, just like they did at Pyramid head before the Navy obliterated our bite.  Tuna exploded on bait dropped with feet of the boat and you could see them flashing about.  They bit the 40.  For about half an hour they probably would have bit a lariat, as what had been mere slaughter became total carnage.  It was that stupid. 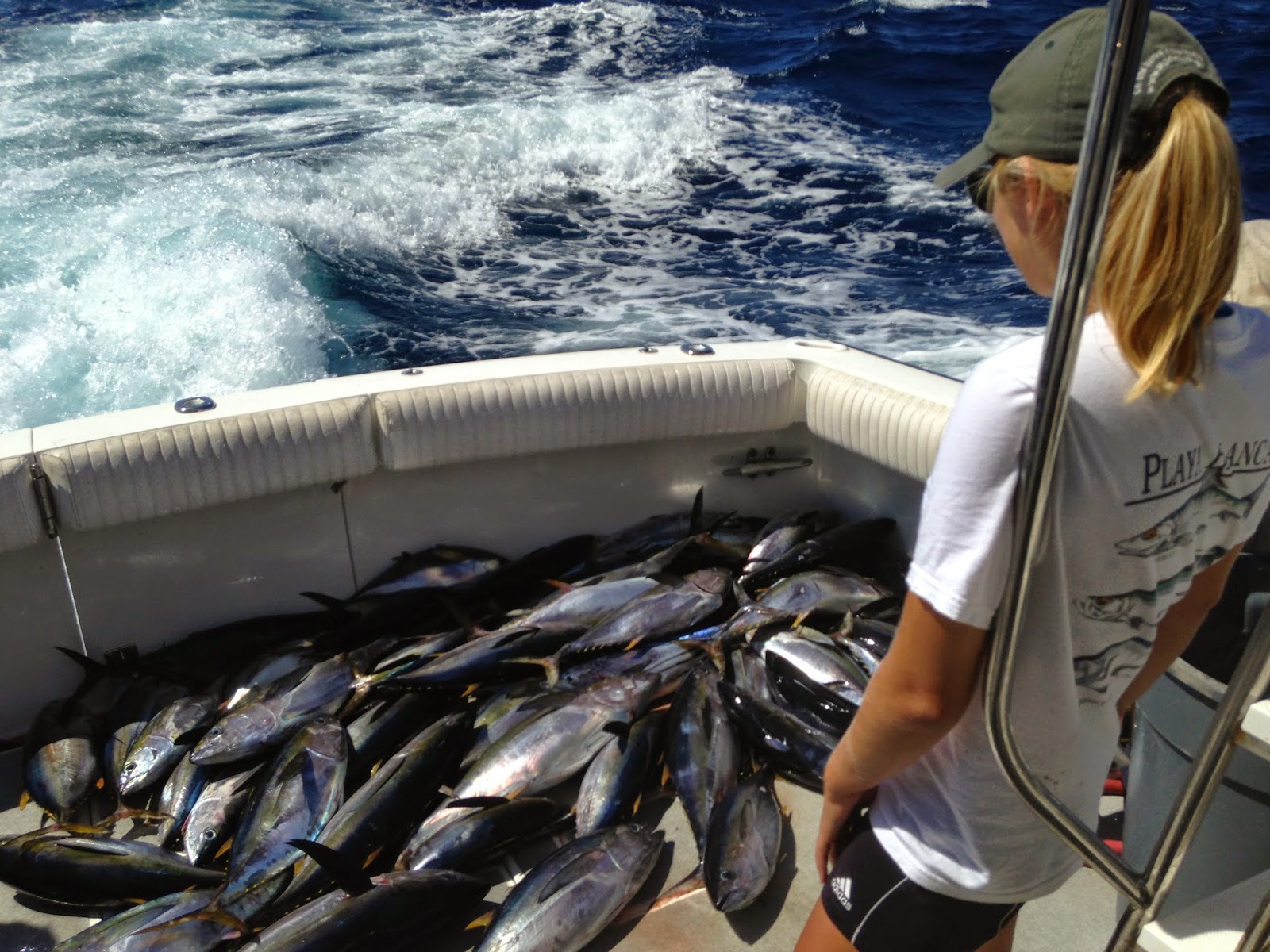 Pantera gazes upon her most terrible kill to date


The pandemonium gradually petered down into a plunker bite and  we were back down to  fishing 20 pound line, but  we put 58 tuna  into the  raw salt water chiller below deck and had a building wind and swell to push us home.  The crew broke out the cutting boards and delivered a heavy dose of butchery as we pointed down swell for Mission Bay. 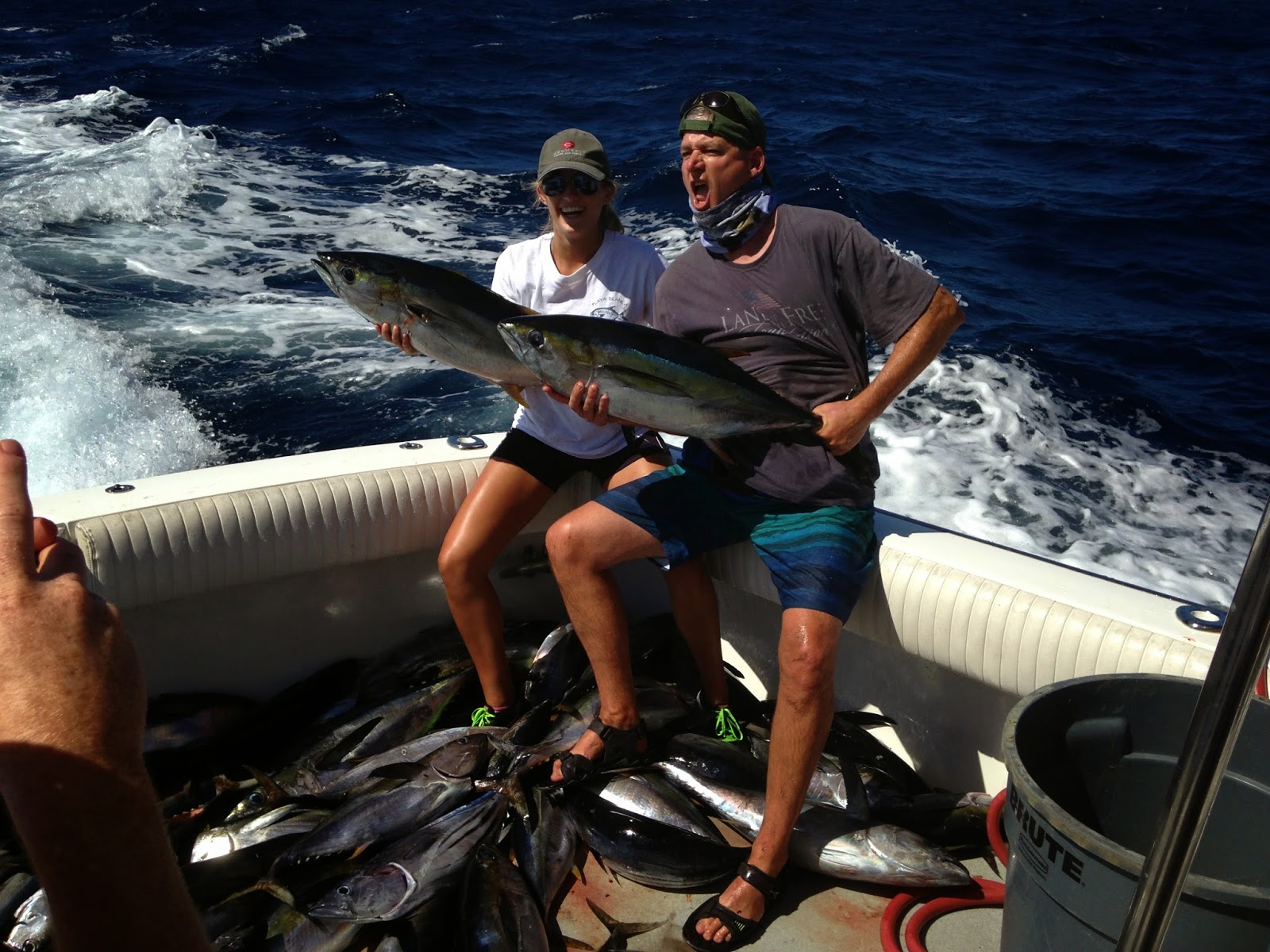 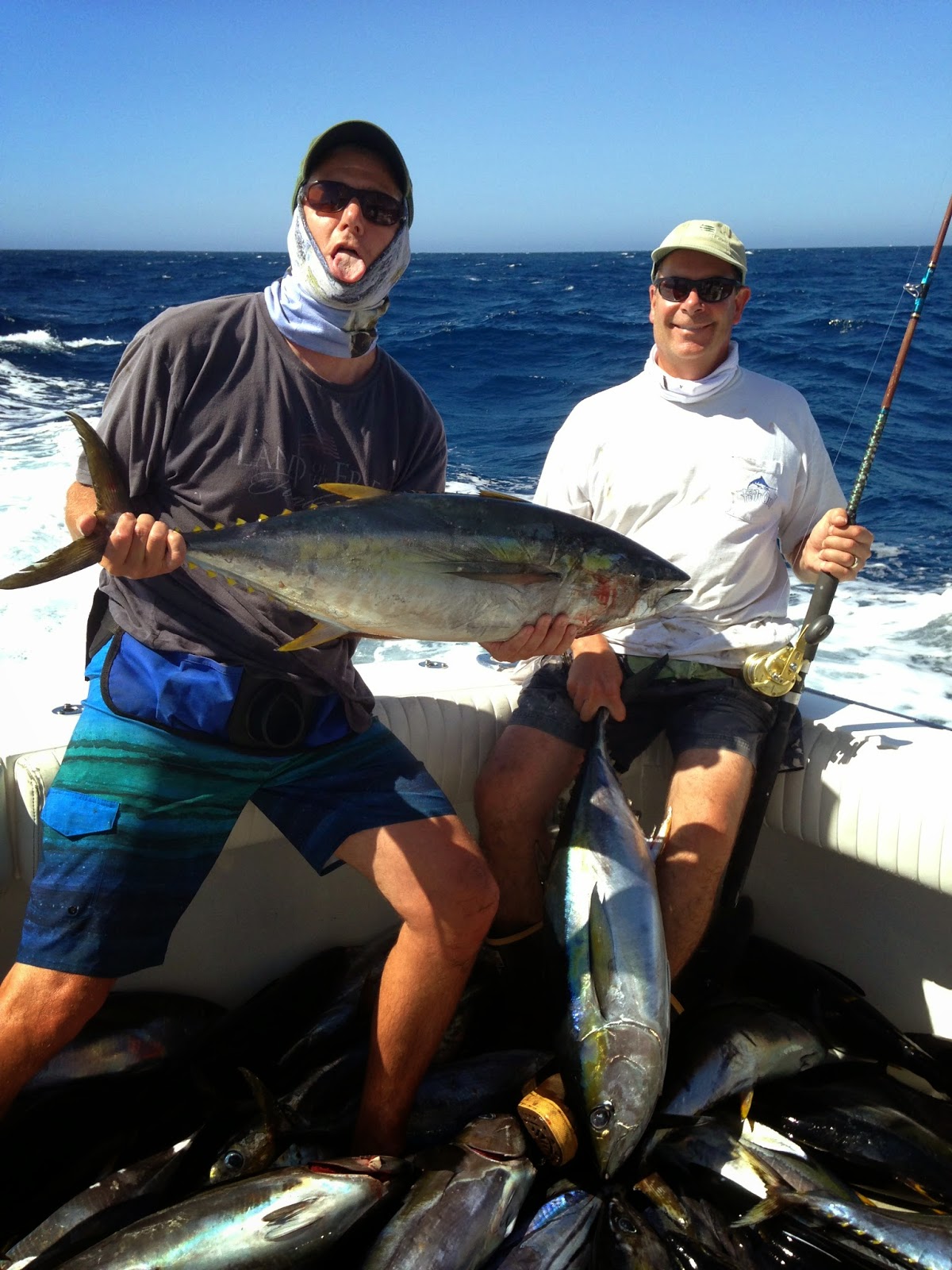 We consumed copious quantities of tri-tip sandwiches prepared by Swifty's first wife and washed it down with the rest of the 90 beers that proved to be the right amount for our voyage.  We traded high fives and played "Name that Tune" to Swifty's classic rock collection.  We were tied up and off loaded by 5 pm. 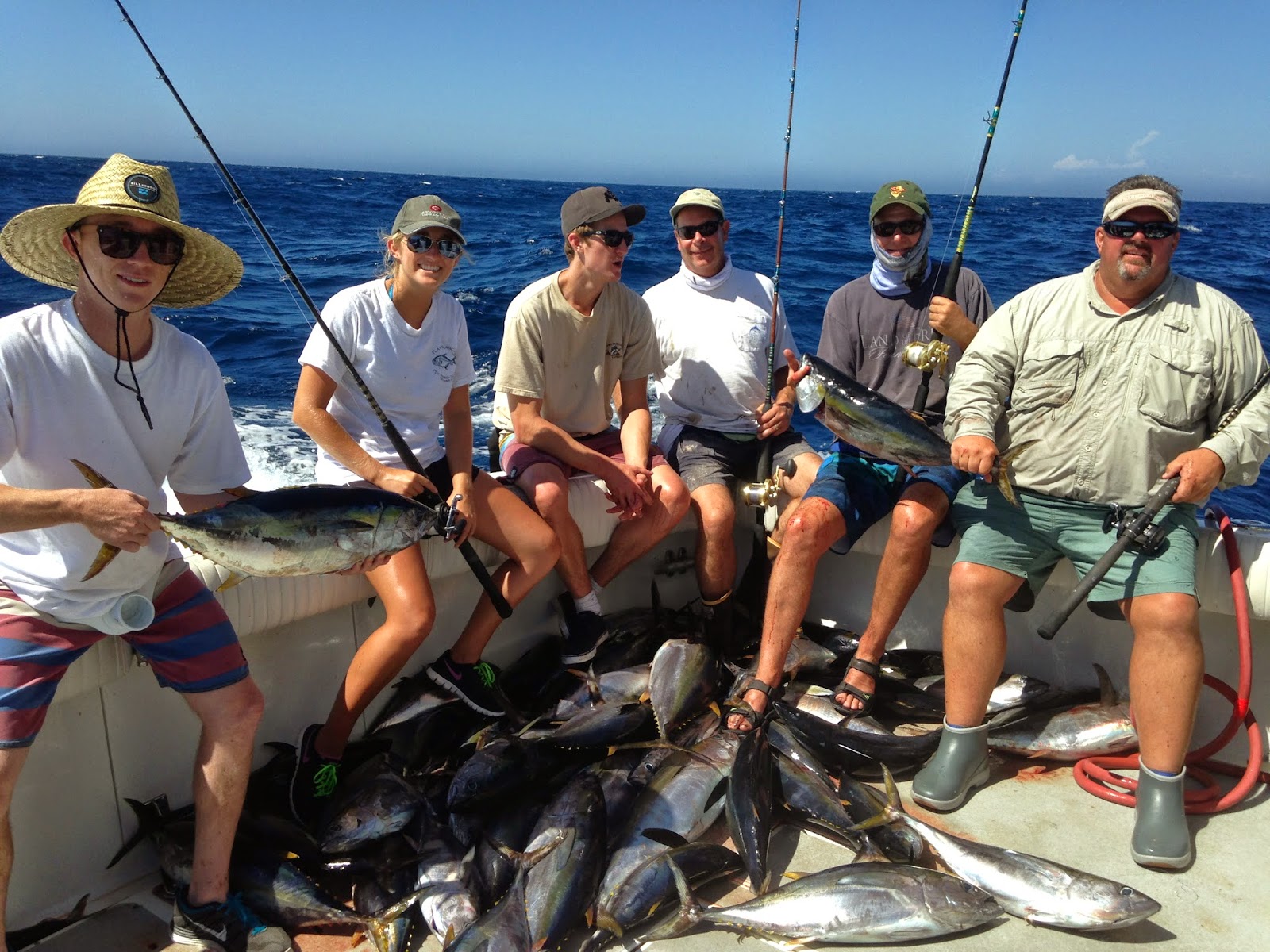 I am transforming my home into a cannery this weekend.  I have two cases canned and am waiting on the last batch of the evening as I type this report.


The fish killing machine that is Limitless, along with its savage crew, delivered once again.  This bite sure seems like it might be durable enough to drive some combo lobster and tuna trips right into Halloween. Get out there and kill something good to eat, because Brothers and Sisters, it is right here, right now.


These are the Days.