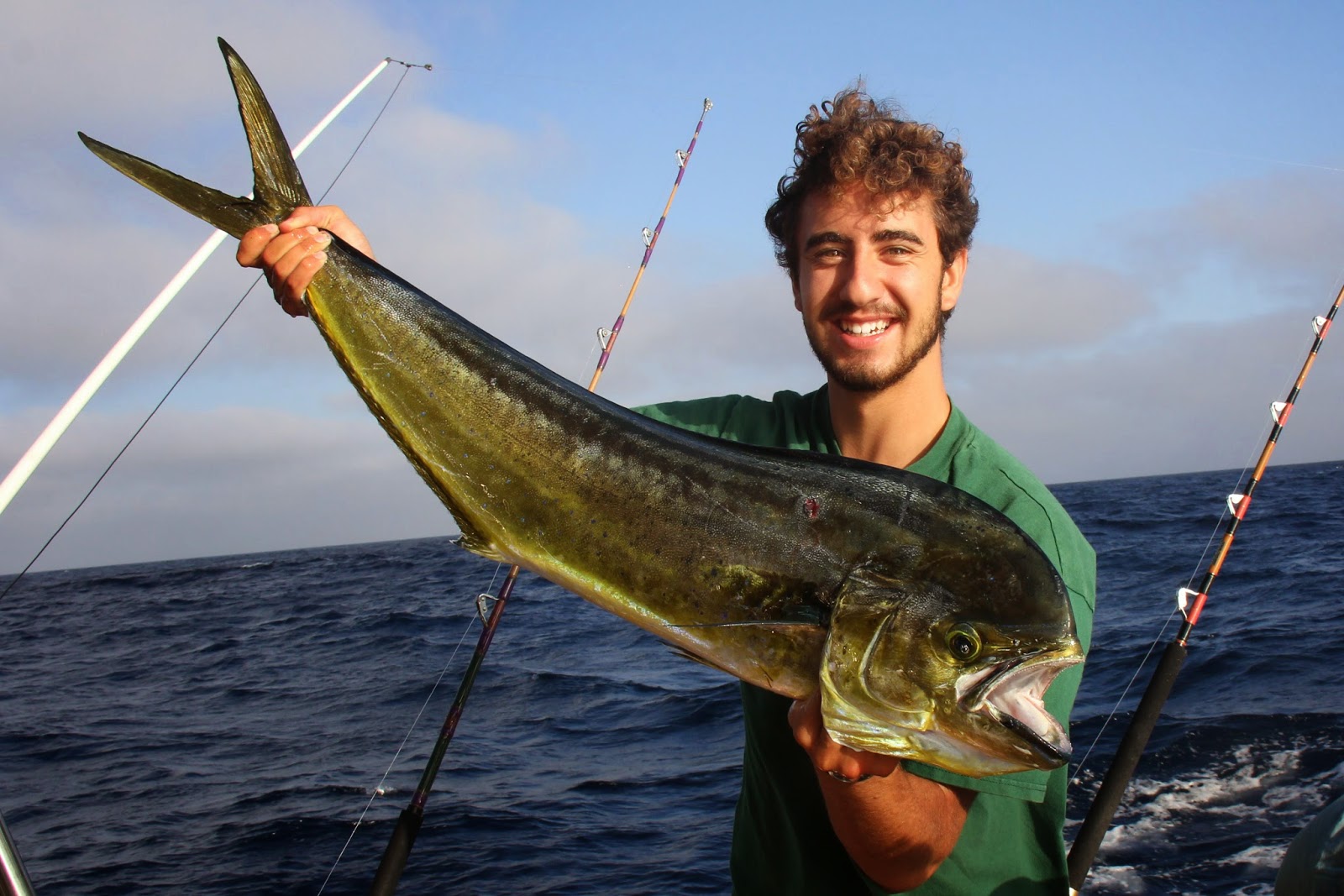 On September 12, your reporter joined Isaac, Kim, Kevin and Matt Sage on board the Fiji Girl for a trip into Mexican waters in search of exotics.  The weather Friday night in San Diego was hot and windy, which caused us concern about what conditions would be like on the outside.


Our crew beat me down to San Diego and loaded up a scoop of green sardines and a five gallon bucket of mackerel for chopped chum.  After a late dinner at Volares and a single malt for good Karma, we bunked down in anticipation of a 3 am departure.


We headed out toward the 425 and the Hidden Bank in the choppy darkness with a very close interval swell that put us in the ditch all the way out and all the way home.


The water was 74 plus in the harbor.  We hit a band of 69 degree water a few miles out and then it went right back up to the 74 plus range everywhere else.


As gray light started emerging, we were greeted by white caps and wind that seemed to increase as we left the mainland further in our wake.  The trolling jigs went out as we approached the north side of the Coronados.  We picked up a few bonito just past North Island.


We droned on with the crew scouring the hazy horizon for birds.  Sea conditions made spotting signs of breaking fish difficult and we did not see the right kind of birds with all of our glassing from the fly bridge.


We got a blind jig strike from two Dorado short of the 425 and Isaac nabbed a baitfish.  We managed to boat all three, despite a Chinese fire drill that left Kim bleeding from a wound on the back of his leg, which Isaac patched up with his life guard bandaging skills. 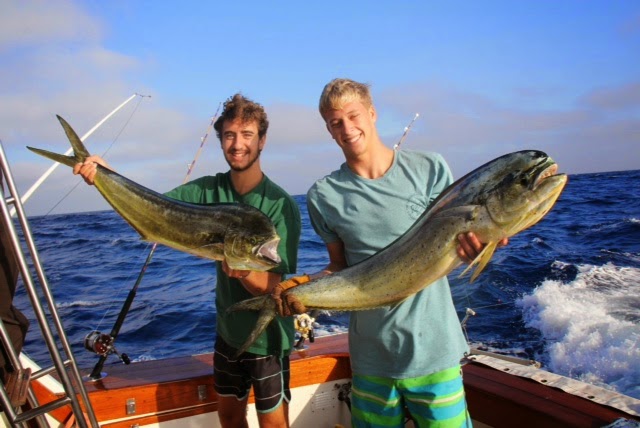 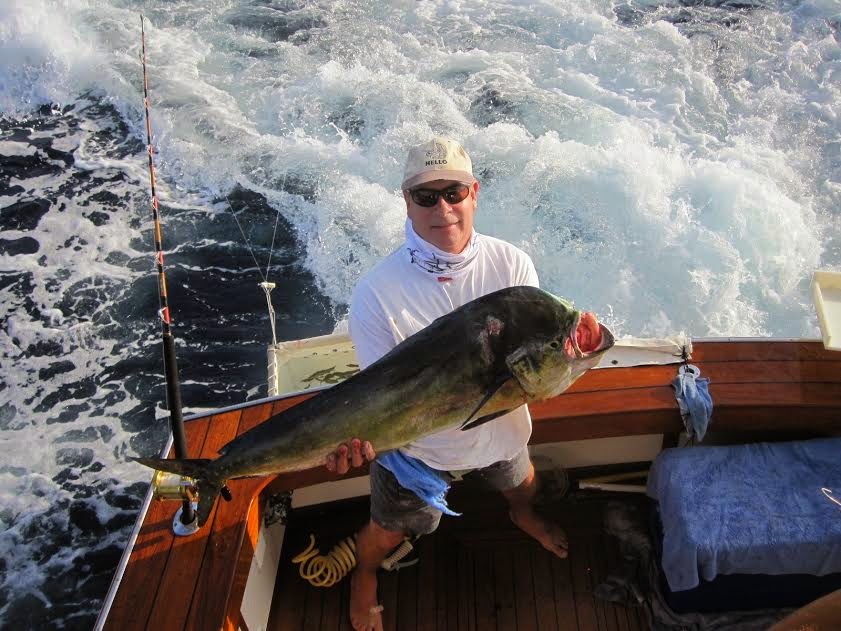 I got to turn the handle on this bull dorado, which briefly escaped the gaff and the kill sack for five more minutes of pandemonium

The weather worsened as we went further toward the Hidden Bank.  Water temp was 73 to 74.5 almost everywhere we went. We found several parties where you could catch a few small Dorado and all the small yellow tail that you wanted, on bait, trolled jigs, and cast and retrieve jigs.  We could not find tuna, as the wind and chop worked against us  We saw no  tern piles or breaking fish, although we knew they were out there somewhere.  The fish we were not keeping were eager to take our jigs, so we had plenty to do before we ate ourselves into a stupor with the enormous carnitas breakfast burritos we picked up from Aurora’s Taqueria in Dana Point. That fare put us into a swaying set of doldrums as we banged around the Hidden Bank for several hours without finding the tuna.  Sea conditions at the Hidden seemed worse than elsewhere and we decided to work our way back in the early afternoon. 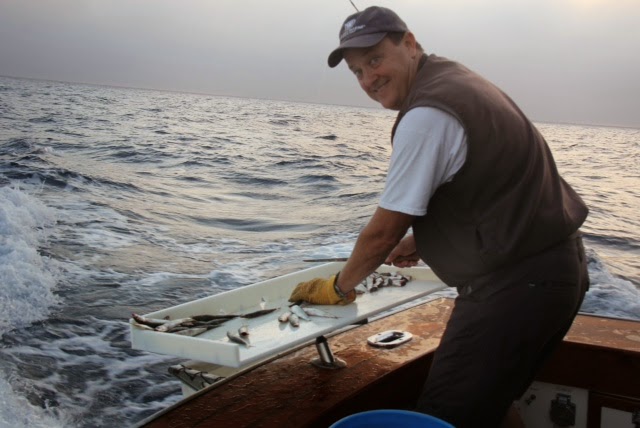 . On the way in, with sea conditions much improved, we glassed bird piles near the spot where we had picked up the bonito west of the Coronados.  We metered tuna within 600 yards of North Island in an area that became very fishy. We got a trolled bluefin on the cedar, chummed out a bucket of chopped bait, and drew boils.  The petrels swarmed us and took our fly-lined dines before we could get bit. 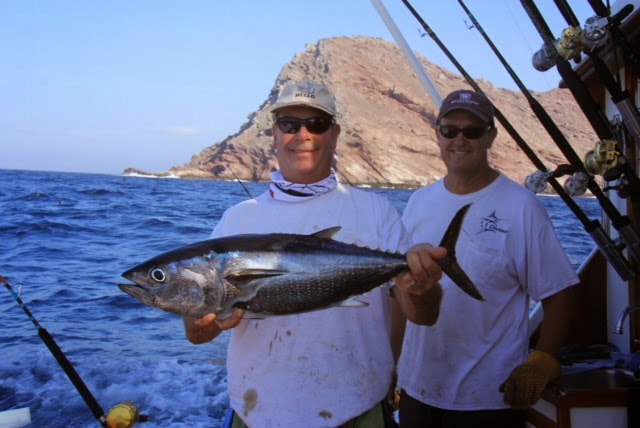 We put the jigs back and proceeded to get non-stop hookups on big bonito.  We eventually pulled the trollers, as we were pretty beat up from the bang around at the Hidden.


We had to earn our fish this time.  Hottest jig was the blue/green cedar, but other cedars worked, as did rapalas, catchees, and other traditional silver headed skirts.