Isaac, Sarah and our old family friend Mark Latimer took a spin on Fishfinder on July 28th to chase the tuna. Mark's previous identity was as the pain-in-the-ass younger brother of my friend Whit.  Mark is now too old to responsibly fill that job description.

We got on the water at 4 am and loaded up three tanks full of sardines and mackerel (what they had at the Dana Bait barge) before heading out into the darkness to cover the 24 miles to our rendezvous with a spot I had in mind outside the 209.

The water temp was 68 degrees when we left Dana harbor and quickly got over 71 as we made our way into the dark confusion of radar navigation.  We put out the jigs in the gray and were on the spot before the sun started to splinter the horizon.  If I could have scripted a better entrance, I don't know how.
As soon as we could see anything, we saw breaking tuna - right where I had made arrangements to meet them. The water was 74 degrees and there were foaming spots of tuna popping up in multiple locations.  I felt like a hero for bringing my crew to this wonderland of pelagia. This was going to be dog-slaughter, I thought. We dragged our spread among the foaming spots as the terns wheeled and dipped above them... No takers.  We switched out the jigs to Rapalas and marauders.  We dragged daisy chains right past them.  We threw iron.  We chummed and threw 'dine's and mackerel and the few anchovies in our tank.  We chopped and chunked.  No takers.  Other boats started to appear, including big sporties with enormous bait capacity and bristling with anglers.  Nobody was getting picked up, even as the fish stayed up and boiled for two hours.  The radio was a symphony of howling frustration.  We hit the outside, inside, left side and right side of the 209.  The tuna were everywhere and we got nowhere with them.
I hated to leave so many fish to find some that wanted to die, but we reluctantly put the jigs back out and motored away toward the ridge and the 181.  The water temp kept increasing as we headed south and got up to 74.9 near the 181.
Mark had brought just enough beverages and snacks to fuel a bulimia convention and we had the rock and roll going to lift our spirits. We looked for paddies that remained invisible to us. We got no love down south, though the sea temp was even higher in that direction.  After the morning had evaporated along with the glassy conditions, we headed back up the line to see if our friends at the 209 would come out to play.  We striped the entire bank again and rotated our jig collection through the wake, all to no avail.  We decided to head back, as we had to be out of the water at 5pm to meet the hours at the Embarcadero sling.
We turned toward the 267, since we had so much bait and that spot is usually more paddy infested. By this time the wind was heavy out of the west and the ocean swells were throwing popcorn.  When we were about 17 miles out, the flat-line short corner troller started screaming as we snapped out of our doldrums.  Isaac and Mark cleared the lines, we threw chum and Sarah began grinding on a fish she felt major pressure to make sure she killed. It pinned her rod to the rail and she started losing steam.  It came in on the down swell side and circled dangerously under the boat as it came to leader.  Mark helped Sarah get that fish through the last few circles of death, as she was burned down by the excitement and the angle the fish had on her.   I put the steel into it and Isaac snapped this rather whimsical photo of that moment that we had it safely over the deck..  The fish hit a dorado colored jet head and had no other companions for us to slay. It got us fired up and we briefly loitered in the zone to see if we could coax some more lightning from the area before time forced us toward shore. 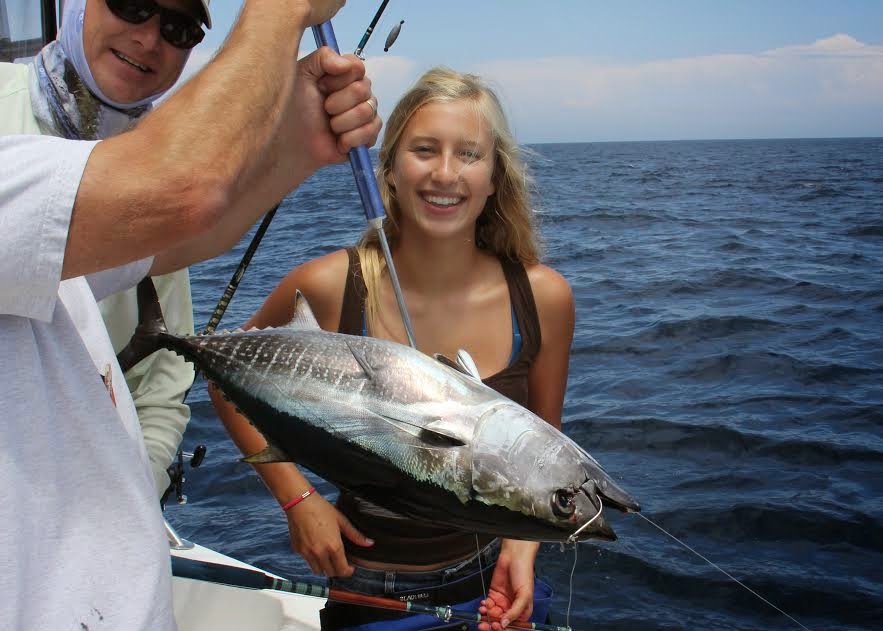 We got to the 267, about 12 miles out, with little time on our hands.  We found some big paddies that were holding dorado and had some more foamers come up in an incredibly fishy spot that was loaded with krill and whales.  We hated to leave, but we were flat out of time.  We made it in by ten minutes to five and got the boat out of the water before the Embarcadero closed.  Mark, in addition to feeding and baiting us for the trip, also gassed up the boat when we towed it home, so his status as honored guest is cemented in our future choices for first string crew, on what we hope will be more productive outings.
We enjoyed a great tuna dinner with our neighbors that night and at least got the tuna skunk off our souls for what we hope will be a great season of local exotics.  We checked the reports and it seems that the counts were way down the day we got out there.   The day before we went the counts were much better, and they were even higher the day after we went, so timing is everything.  I am in work lockdown for the next couple of weeks, but this bite has every indication of getting stronger, as this El Nino seems like the real deal, complete with humidity and sudden rain squalls.
If I had to do it all over again, I would.
These are the Days
at 7:37 AM