On August 22, 2014, I had what is turning out to be an ever more precious opportunity to get out on the water with all of my kids, as the oldest three are all in college now. One of the nine-year old boys, David, decided to stay inland to concentrate on chasing the Chinese language.  We grabbed the kids’ friend Jameson Johnson, who was leaving us for college back east in a couple of days, to round out a six person crew that included Isaac, Lizzy, Sarah, and Tommy.
We had been out a few times chasing the pelagics this season, with not much to show for our hours of trying to find biting fish in the warm water, but we know they were out there and that we had been among them.
We had the Finder in an overnight wet slip at the Embarcadero, so we were able to get on board by 5 am and present ourselves at the Everingham Bait barge, where we got a good scoop of the right sized sardines.  We pulled out into the darkness and medium chop and set a course for the northwest part of the 209, as fast as radar travel and bait preservation would allow.
We arrived at dawn and put out the jigs in mostly 73 degree water.  We saw a lot of krill petrels, but few terns or breaking fish.  We dragged around the 209, stopped to fish a paddy that was holding a few fish that proved unwilling to take our bait.  We spotted some drifting freighters about 7 miles to the northwest and trolled our way around them.  There were several small whales moving rapidly around us for some of that time, but not much else.  Tommy mostly enjoyed one of the several long naps he took in the v-berth during our long bouts of trolling

The water temp varied a lot on that long detour.  We started heading back across the bottom of the 209 toward the 181.  We found a bunch of terns packed over a very acrobatic dolphin pod that we stayed and played with for a while, edging in from every possible angle with our jigs.  We hated to say goodbye to them, but they were not giving up any tuna. 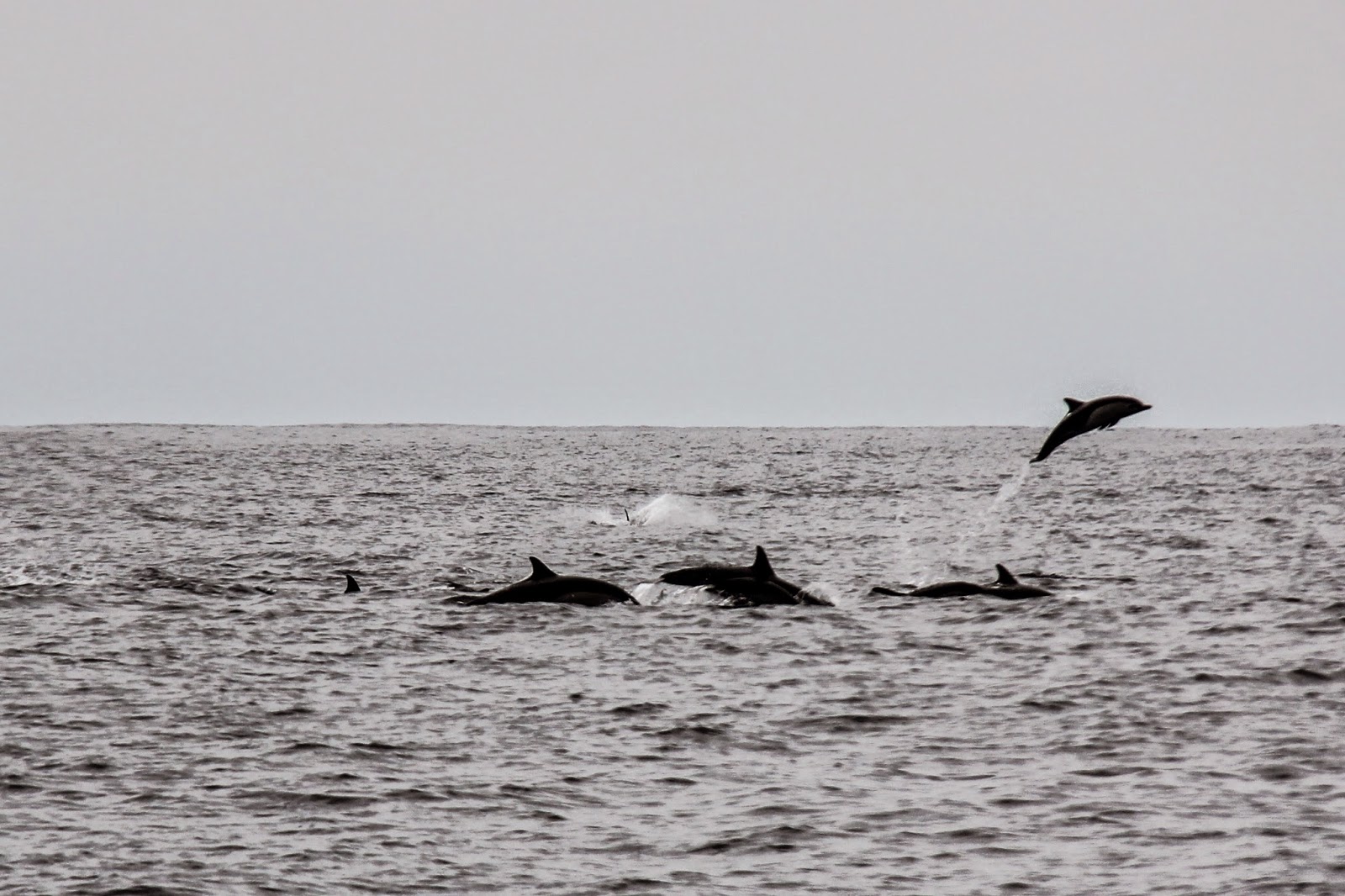 We dragged down past the 181 and stopped on a few dry paddies.  The water kept getting warmer and made the high 74’s. The wind, which had blown noticeably in the early morning, began dying off with the morning.  We got down by the 182 and took a turn out toward the 43.  We saw many whales, at least 20, and several of them came up pretty close.  The water was very lively.  When we were about 5 miles from the 43, it was clear that we would be a long way from home in the middle of the afternoon, although conditions were so nice it was tempting to keep heading out.  We changed our course back toward the middle of the ridge, where we hit 75 degree water and continued to see whales.


When we hit the ridge, we stayed on the outside and ran toward the 181.  We stopped on a large hammerhead shark that was under some pin wheeling terns.  We dragged the jigs past that spot, but nothing hit.  In retrospect, we should have thrown bait, as it may have been following tuna.  We did not get a picture of that fascinating shark, nor did we get a shot of the ridiculously golden sea turtle we circled around to make sure we could believe our eyes.  We also saw several military copters and ships on maneuvers to the south.  A gentle, but noticeable swell was steadily building as the wind died to nothing and the sun beamed down on us.


While we were in that rich area on the way to the 181, we saw a promising paddy and dragged our jigs past it.  One of the light trollers rigged to an anchovy pattern hex head went bendo as the spectra peeled off the Torsa 20 reel.  Isaac seized the hooked-up stick while we cleared the other lines and fly lined a couple of reddish ‘dines that still survived at that point. Isaac jacked that Dodo in so quick it was very green at the gaff, but we managed to get it into the box after a bit of fumbling around. 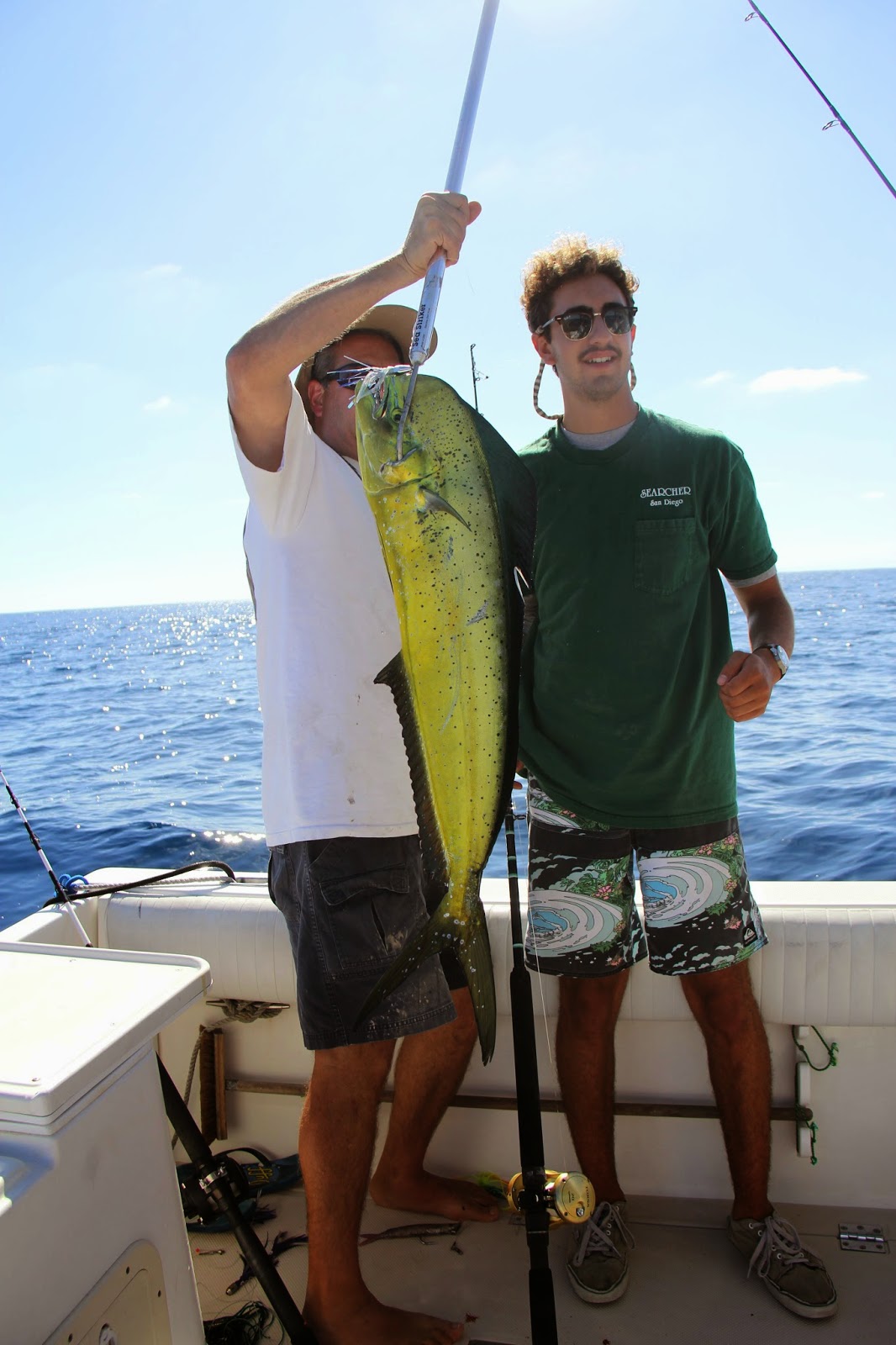 We got no takers on the bait, so we set up to drag by again.


We made another pass in the same direction and were rewarded with another strike on the same jig. 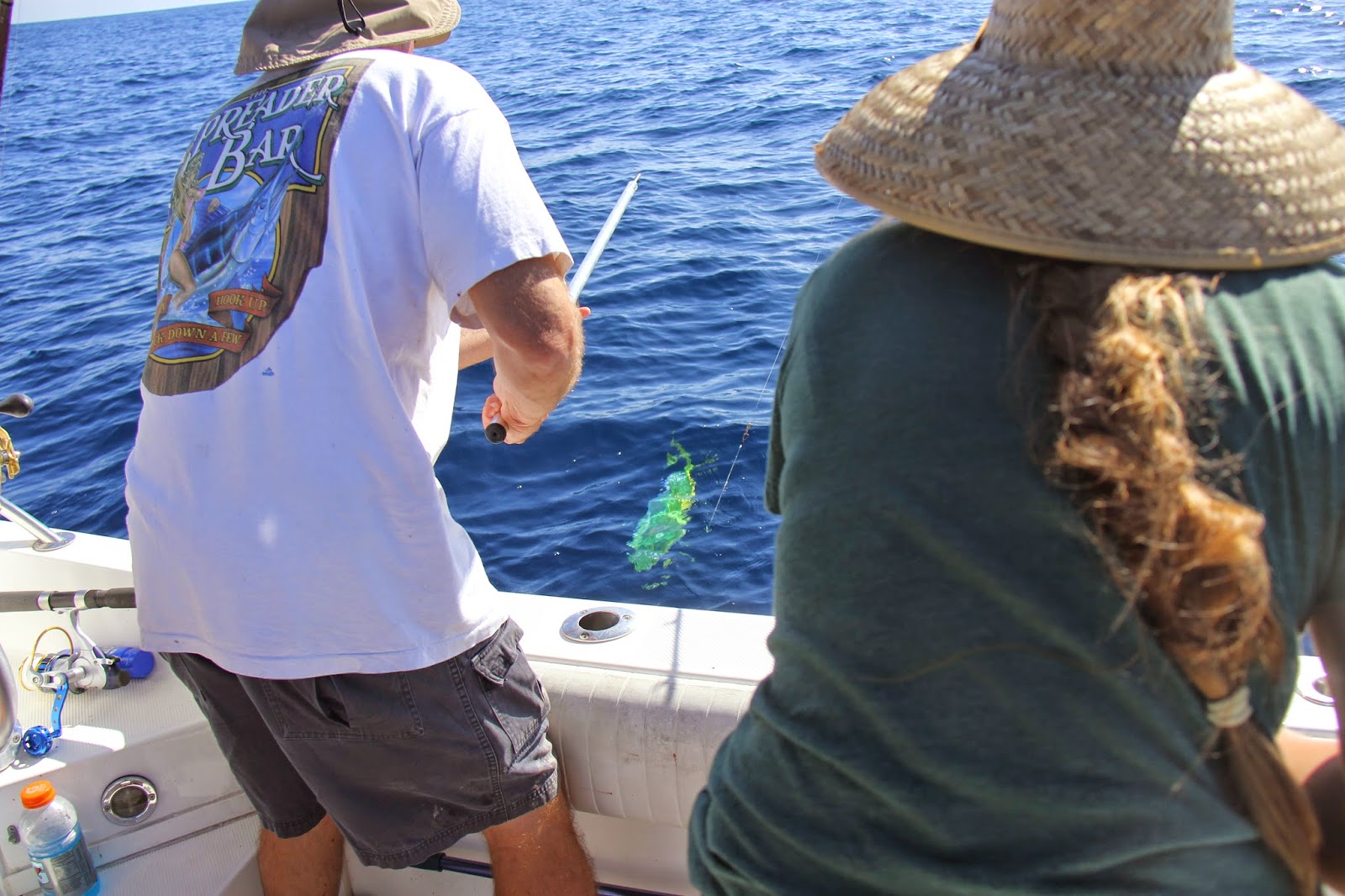 This time, Jameson was in charge of the catching and we had two in the box. 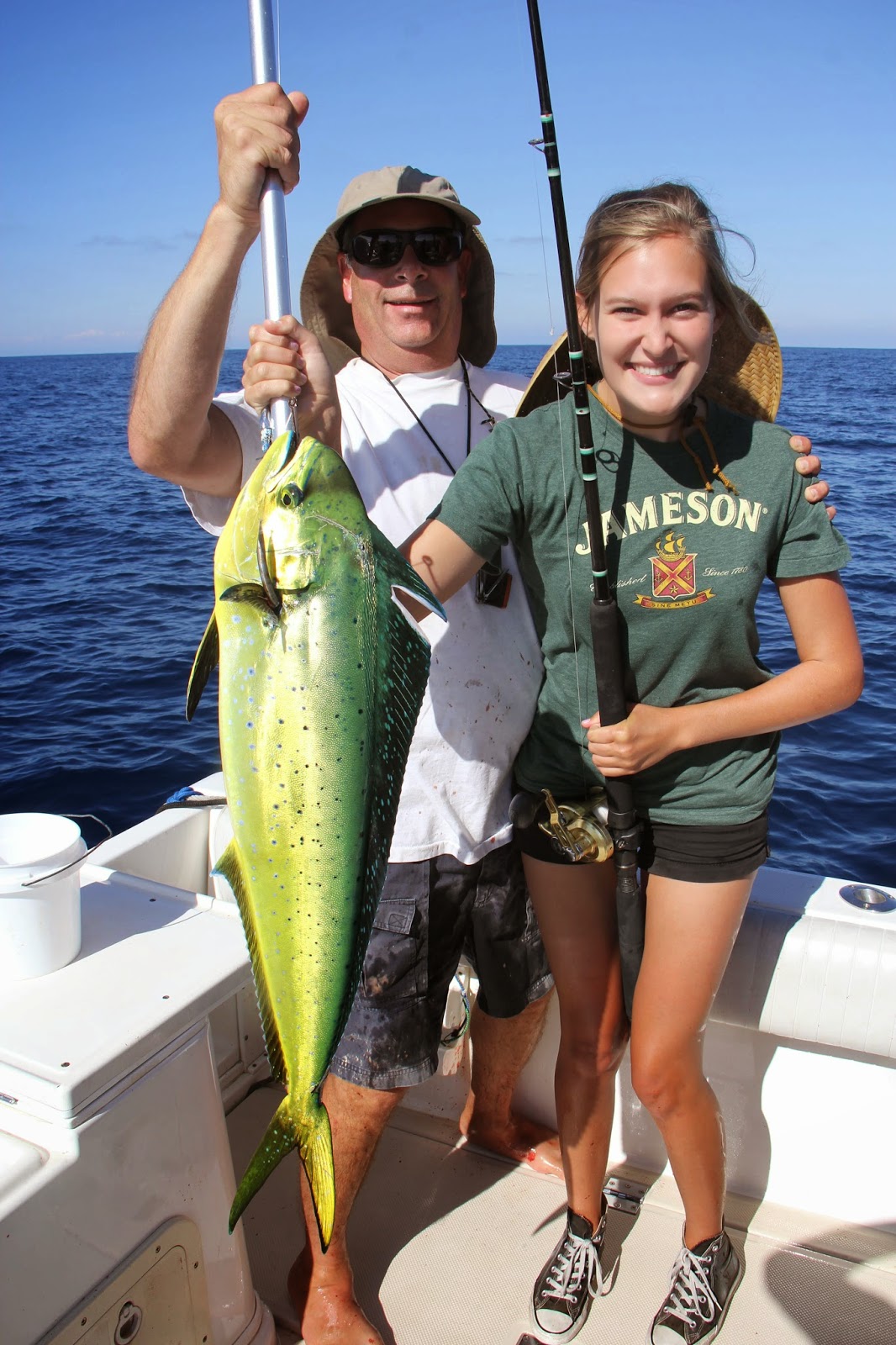 We saw another dorado near the paddy and set up for another run.  We were heading back on our track when this naval vessel rapidly approached us on a collision course for the paddy.  We tried to maintain our angle of attack, but ultimately had to throttle back and change course as he steamed within putting distance from the paddy and left us wallowing in his considerable wake. 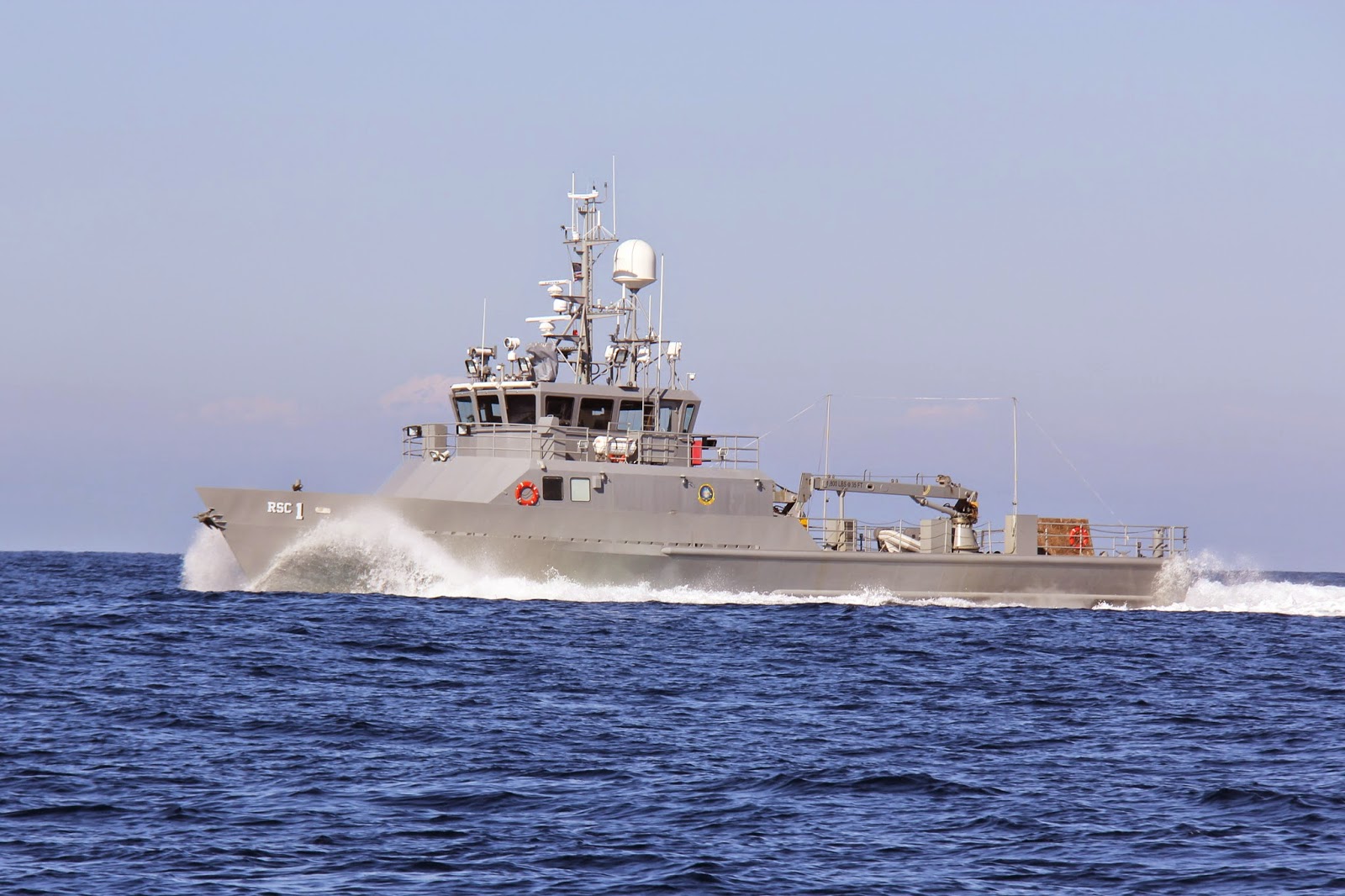 We made one more pass without success and then reeled in the jigs, as it was now after 4 pm and we found ourselves exactly 40 miles south from the Dana breakwater.  We set our course for zero and came in at between 22 to 28 knots with a following sea and lots of whale spouts to pull us off course from time to time.  We made it back to port in less than two hours, rinsed off the gear and were home by 6:30 pm.  We cut the fish up at home.  The Johnson family fed off of Jameson’s catch and we were able to get Isaac’s fish to feed a dozen people we invited to join our kill.


The boat ran like a champ and I rewarded it with an oil change the next day.  We traveled about 140 miles, mostly trolling, and saw the kind of abundant life that often gives up more than two fish. Two dorado is what we got, along with very user friendly sea conditions amidst the best company I get to keep.  It was another day that made me feel lucky.