On September 30th, Isaac and your reporter joined Secret Skipper to head out with the rest of the fleet past Catalina Island to yank jigs all night again for the big bluefin other people keep catching.

We left Pedro at 5 pm, picked up a scoop and a half of just shoot me sardines from the hospice pen and headed out in cranky chop to set up just after dark.

It was windy so we used the 400 gram Mustad knife jigs we upgraded with larger assist hooks and 200 pound leader.  We constantly rejuvenated their luminescence with a blinding TV- advertised flashlight that is so powerful that it produces recoil, even after you freeze it in a block of ice and repeatedly drive over it in a huge pick up truck while your neighbors call the police.

We changed location constantly as we chased meter marks around in the backlight of the fleet over many square miles.  Many long range sport boats were out there with us, along with a few small boats like ours.  The zones we explored got progressively more crowded and the seas eventually flattened out quite a bit.  Several boats got fish, including the "small ones" in the 50 pound class, as well as the bigger ones over 100.

We got neither of those.  Shortly before gray light, after another exhausting night of jacking our handles, we hit a pile of promising marks and got some biters. By that time, the improving weather had allowed us to change out to 300 gram jigs. The fish barely fought back against our heavy gear and we boated three in short order.  They were bounceable with the gear we had, but we gaffed them out of our sense of ceremony.   We bled, gilled and gutted them to get them in the kill bag and buried in ice right away.  Their dainty size made our ice supply look impressive.

They were all about 20 pounds and were the smallest bluefin we have even heard of this year. I have no action photos, as we all hooked up at once and the rods didn't bend much anyway. We were grateful we still had a few spots left for the giant ones to fill out our limits as we watched the sun come up.  We planned out finishing out the early morning by dragging the Nomads around once we had sufficient visibility to put them out 350 yards behind the boat.

The sky was cloudy and stayed that way all night and into the part of the morning we stuck around to see.  Sea temps were 67- 69, noticeably colder than what we found last week when we did the same thing for no tuna and ended up salvaging the day fishing yellows at Clemente.

The ocean grew positively glassy.  We got one hook up on the mackerel pattern Mad Mac.  We kept the boat in gear to make sure that we maximized our chances for a double hook up. Instead the fish let go after about five seconds, even though your narrator furiously reeled in the diminishing hope that it was a huge tuna charging the boat.  That proved to be the highlight of our trolling adventure, though our striping the ocean continued another three hours until about 10:30 am.

Around 9 am we stopped on some free swimming dorado we spotted well off a nice paddy.  Skipper was the only one ready with light gear and he tossed on them as we slowed down for his cast.  He got his fish to color before we could winch-monkey both jigs back into the boat, which Isaac interrupted doing to gaff Skipper's fish. The dodo was long and skinny, but mostly skinny.  We rolled  back up on the paddy that was sparkling with jumpers, but could not get any of our gummy takes to stick.

We passed off half of our remaining moribund dines to some friends in another boat.  Their bait had rolled just before ours completed that process.  They had caught a couple of nice tuna during the night and expressed their congratulations to us about catching three, until they learned how small our fish were.  At that point they kind of stood back and moved away slowly, trying awkwardly to avoid embarrassing us by looking directly into our eyes.  We did not let them see our fish, but pointed at the kill bag, bulging like the Michelin Man with its bountiful supply of ice enveloping our pygmy prey. 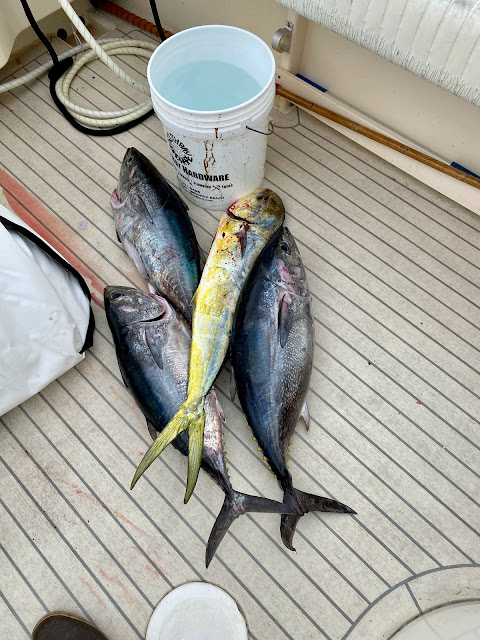 We had obligations that required us to leave the grounds by 11 am and we had a smooth 32 mile an hour ride home. 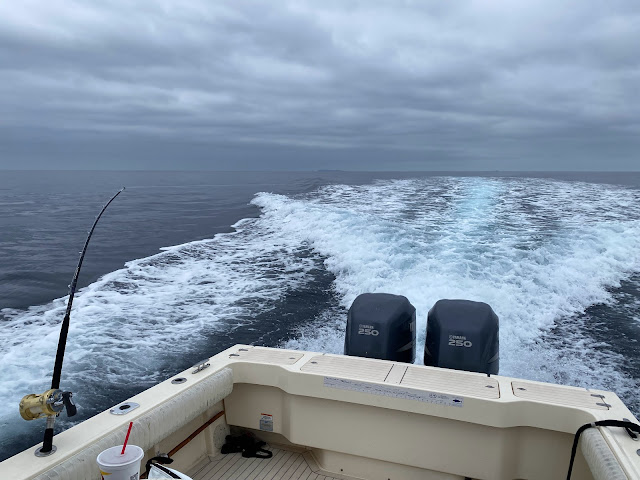 An exhausted Skipper meat-axed our well-chilled prey on the way home, so we all have some nice sashimi for watching football and feeling sore today.

The sky was cloudy and stayed that way all night and into the part of the morning we stuck around to see.  Sea temps were 67- 69, noticeably colder than what we found last week when we did the same thing for no tuna.

The ocean was actually very fishy, with yellowfin on some of the dolphin pods and many good bluefin results for people with more talent than we bring.  There were several spots of tuna-chasing dolphin crashing around in calming water, so it is still on out there and probably going to get better before it goes away.

We made it back to the harbor and were unpleasantly surprised that prices at the fuel dock had jumped over 20 per cent since we gassed up less than a week ago.  $7.50 per gallon may do more to keep us at home than the mediocre results we have achieved dragging these jigs at the least efficient speed that most boats can deliver.

If you are small and weak, the good news in our scouting report is that there are now bluefin available that everyone, including small children and old people, can get over the rail.

On the way in, we dodged the newly planted lobster pots mining the harbor entrance at Pedro light.  It was a reminder of the season opener and the fact that we now all have an opportunity to load our cages with pelagic carcasses and chase bugs.  This will be more economical if we bring oars or rig sails, but the notion of lobster, bluefin and dorado in the same trip is a pretty cool (and achievable) fantasy.

Get your gear dusted off for that incredible triple fantasy while you can, because 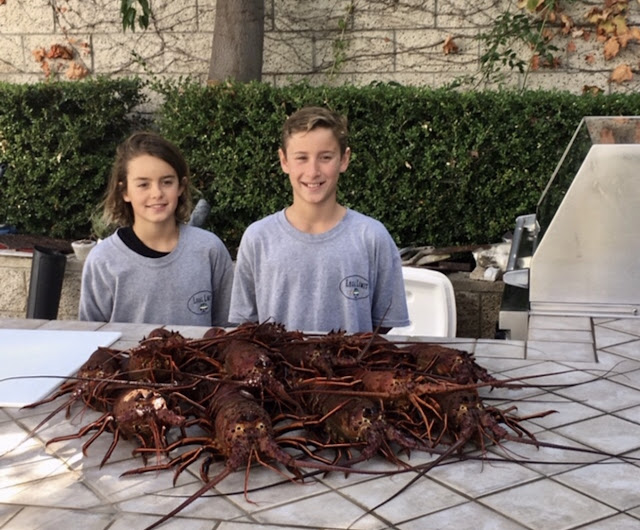