Your reporter's luck this season has continued and an attempt will be made to celebrate the occasion with merciful brevity.

On February 26, Secret Skipper, after we again failed to recruit additional crew, set a heading for the island of Romance to chase bugs for perhaps the last time this season, just as the world's  course began to veer toward a more sinister heading.

The weather was a bit fresh and continued to brisk up as the afternoon wore on.  We left on a strong low tide and headed out into a 30% moon at noon.

Bait was a big problem and Skipper had to drop a benjamin to get enough salmon heads and frozen mackerel to fill 10 bait cages.  With the price increase in fresh fish, nobody was paying for fish butchering, so scraps were sold at an edible premium.

We were quite confident after running the table so far this year. 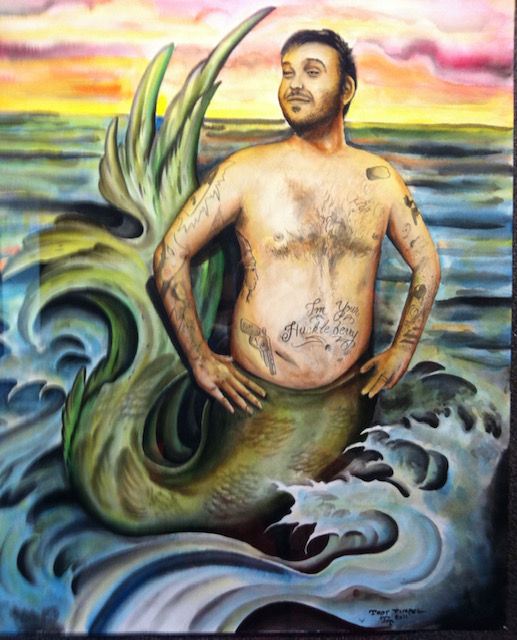 Your reporter had flights of waterman's fancy as the island drew nearer.

We made a deep set with three rigs in promising structure 225-250 feet down. We made an intermediate set a good distance away in 150 to 180 range.  We then hit the shallows for a set of four at between 60 and 125 feet.

Although it was windy, none of the rigs were pegged by current or wind.  We fished for bass as we waited for darkness after making our set by 5:30 pm.  True to form this year, we had no interest from the fin fish.

Our first pull at the deeps took place closer to 7 pm, as the sun is now lingering a bit longer into the evening as darkness contracts.  We drew blanks for all three deeps, despite a pretty good soak.

The intermediates delivered three keepers, so we went into the final four shallows needing an average  of one keeper per hoop to get to the halfway mark of a single limit of 7 by the end of the first set, which would be a red hot start.

The first shallow produced nothing at 125 feet.  The next one burped up a few shorts, some turban snails and a spider crab.  The 9th pull came up looking like a basket of kelp, until they started scuttling about in a kaliedoscope view as the hoop drew from color into clarity.  It produced 12 bugs, eight of which were legal. 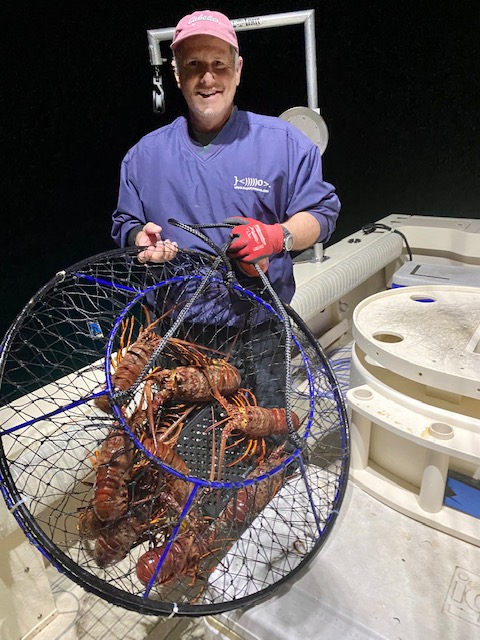 It was a new record for me in a season that has already given us records for hoop population, along with outstanding quantity and size.  As we hysterically shook out our bounty onto the deck for sorting, the radio blared Sir Mix-a-lot's "I like big bugs and I cannot lie."  It was the fastest double limit we had made in over twenty years of lobstering.  Giddiness once again became the mood of the moment.

The last hoop put us over our double limit.  We had already started throwing back legals and were done in the first set.  All that was left was to recover our gear and head home at 8 pm, but there was a sea monkey-wrench waiting to jump into our gears.

We had lots of trouble holding position in the windswept deep zone, which had produced zero legals in both the original pull and recovery.   It was not big deal, as empty hoops are just not a labor of tragedy when there is a limit of nice bugs in the tank.

We started catching and returning legals from the mid range, but kept blowing over our buoys in the stiffening crosswind.  We had many resets in our approaches and lots of false lunges at buoys that kept beelining for our props.  Finally, our luck ran out as we tried to bail out of an over-run and ended up chopping up a buoy in the starboard prop.  Upon shutdown and inspection, we had rather hopelessly spun the line around the prop into a ball of confusion.

We lashed a big serrated Dexter blade to the end of a gaff and began sawing through the many coils of twisted line on the lower unit as the boat drifted without power at a disturbingly swift pace.  We managed to recover the hoop after bouncing it along the bottom and through the kelp for over 500 yards.  We were able to free the prop and motor away after getting dangerously shallow.  We still released four bugs from the wild ride to Toad Hall we gave to the lucky bugs that were liberated.  We watched them pulse down to the bottom, instead of getting tossed into the tank with their countrymen who already had dibs on dinner reservations with us.

By the time we got to the last remaining shallow, it was 10:30pm and the last two hoops had a two and a half hour soak.  They were plugged with bugs as we threw back at least a dozen legals and many shorts.

Eleven of our fourteen bugs were females, which have consistently been a bigger gender percentage of our catch this year.

We were anxious to get out of the wind and head home.  Despite the fact that we had posted our fastest limit ever, we were quite beat up by the time we dragged the last of the gear back up to the truck in the steepness of a new low tide after 1 am.

There was to be no clemency for these occupants. 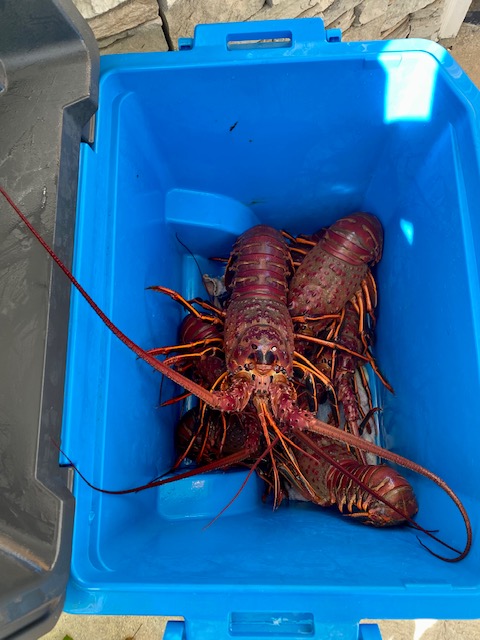 The average quality was quite good, although there were no monsters. 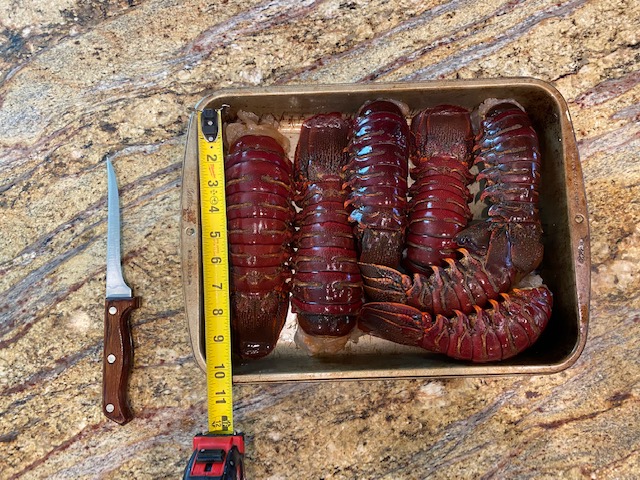 Your narrator made it to bed  by 3 am, so it was more like the fatiguing days of past seasons than this year's race to success.

We had Wendy's brother Randy and our old pals Rich and Rachel drop over for dinner and cocktails.  We celebrated our good fortune and toasted to amplified memories of our fellow Hastings alums  and the dirty old Haight-Ashbury days of the 1970s. 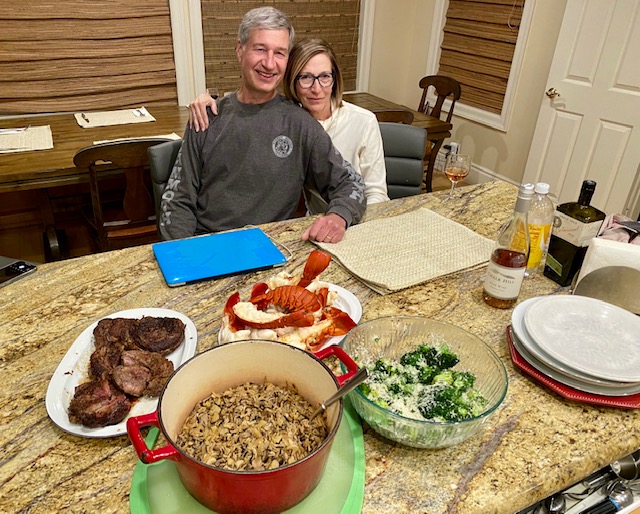 This has been perhaps our luckiest season yet.  Things are not so lucky for our friends half way around the world.

The pulse of the free world has quickened.  We are in a position to help.  Let us be grateful for what we have, as we feel the harbinger of a nuclear winter upon our necks and realize, with every breath we take, that 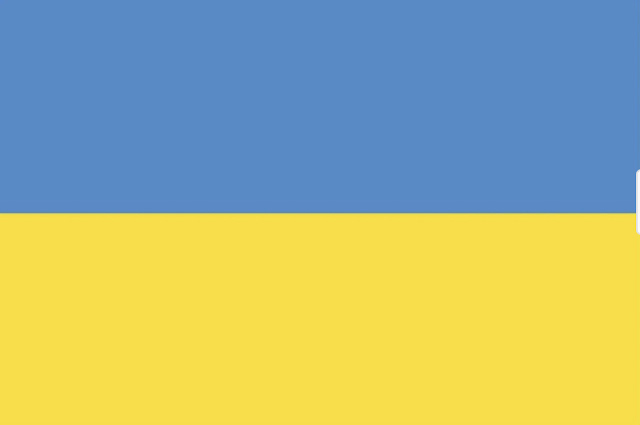