Crayfish and Cow report for February 5

Secret Skipper invited me to head out into the weekend crowds at the Island of Romance to try again for lobster on Saturday.  The big winds that stubbornly persisted from the east and blew everything in the yard around would be tamed at the island.

We got an early start a little past eleven.  The bait receiver we were counting on was closed.  Fortunately, Skipper had frozen salmon heads and several ziplocks full of frozen sardines in reserve, but it was neither fresh nor abundant.

We decided to try for mackerel and drifted around the bait barge with sabiki rigs while spooning out cat food.  That brought nothing except seals.

In addition to the frozen bait in the cooler, Skipper had an old vacuum sealed bag of slime pads that had been on  the boat many years. They are pieces of  felty cloth about the size of one of those cleaning cloths you get with a new pair of glasses.  They are saturated in a marinade of nuclear fish aroma syrup that is designed to slowly release into the water to bring in the lobster like bloodhounds.  We had ten pads - enough for one in each bait cage. We decided to head over to the island with what we had and try for mackerel there.

We had a smooth, 32 mph ride over to Two Harbors.  The fuel consumption was 1.4 miles per gallon, which is really efficient for this much boat and motor. 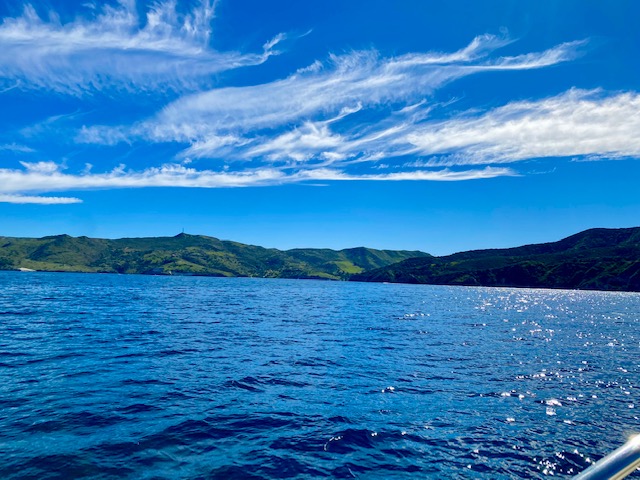 The island often gets extremely green this time of year after a bit of steady rain.  It was maximum Emerald City as we rolled toward the Isthmus.  This part of the island was surprisingly uncrowded for a beautiful Saturday, but it had been a bit chilly.

We  headed west past the YMCA camp where we had so much fun with the older kids and so many of their childhood friends 20 years ago. We drifted about in promising locations and yanked for nothing instead of mackerel with the sabiki and cat food combo. 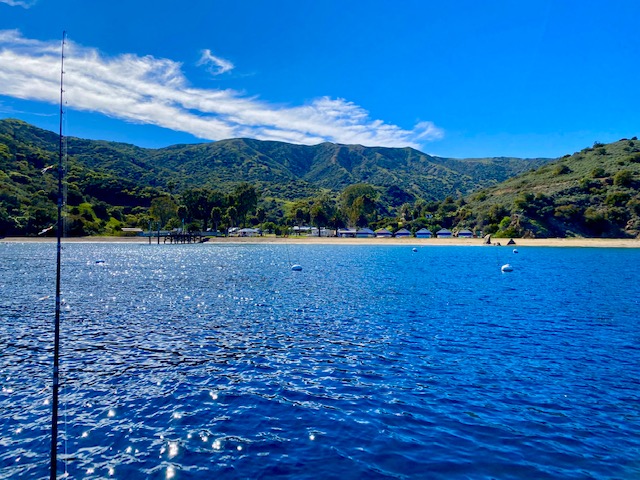 By 3 pm we started cutting and filling the seal-resistant bait containers in carefully rationed amounts to make sure we had decent offerings in all ten hoops.  We then began getting the gear ready for deployment, attaching lights and paying out and re-coiling all of the lines to get the rope wet to minimize tangles.

We put out two 300 footers at a depth of 225.  We had minimal current and the counterweighted line came to rest close to vertical with the line decending toward the baited hoop.  We had a lot of time, so we scouted locations and dropped three 200s and a 250 in the 160 to 185 zone.  The 150 went into some promising kelp at about 100 feet and we tried to place the last three in the 60-70 foot zone near rocks and the edge of kelp groves.

All gear was deployed by 4:30.  The water was very clear with good visibility.  The sun set just before 5:30, but twilight lingered until just before we started pulling the first of the deeps at about 6:20 pm.  There were some squid that readily came into Skipper's recently refurbished green lights, but they were quickly broken up by the two enormous seals that aggressively chased us around the entire evening.

The first two deeps produced three legals annd several sub legals, which really boosted our morale right out of the chute.  The four mid-rangers produced one legal despite being arranged around a really promising stonepile.  We rolled into the shallows.   The 150 fooled us into false optimism with huge resistance caused by a load of kelp we were hoping was lobster.  The last three came through through for us with three legals and quite a few shorts.  We had 7 legals on board after the first set was completed in a very short and smooth series of retrieves.  Another great start with no snafus.

We went right back in to pulling and probably did not give them much of a chance to crawl because of our rapid pace.  The next set of ten produced a disappointing few shorts and a single legal, with mostly empty hoops coming into  view as we peered down into the depths with our lower lips stuck out.  We moved the 250 foot from its spot with the underperforming midrangers to a spot out with the deeps in about 220 feet.  It was still early, but our promising 70% pace had dropped to 10%.

We took a snack break to slow down and then started pulling again.  The deeps and midrangers produced mostly empties or shorts.  We rolled into the last four shallows with grimmer faces.  The 150 felt promising, but again all it caught was kelp.  The 125 we pulled up immediately afterwards sported the same resistance and kelp colored cargo as it rose toward our straining lean-down.  The kelp started scuttling about in separate movements as it hit the lights and we realized they were bugs.  We had eight, including three legals. It was clear that hoop was intercepting a big crawl.

We got six in the last three shallows to make our two limits in 30 pulls.  We broke down and stacked the one that  rounded out our limit and then went back out to recover gear at the remaining 9 locations. By now, the wind and current had picked up.  Several of the counter weights were pegged into the butt-end of the deeper buoys. The lobsters were clearly on the crawl, especially in the shallows, as we recovered and broke down the gear to stow for the ride home.  We threw back another 6 legals and more shorts while clearing gear.  They were swarming when we called it quits.

The wind had come up a bit as we pointed for Pedro at 9:02 pm with all gear stacked and cleaned up for the ride home.  The sky was clear and the stars were out as we headed toward the bright lights of the mainland.   We came home at 27 mph in the increasing  minor chop. The bottom crescent moon was setting when we turned left toward Pedro after clearing the light house. As always, the air temperature  dropped about 10 degrees as we left the open ocean and entered the chilly shadow of the Palos Verdes peninsula. 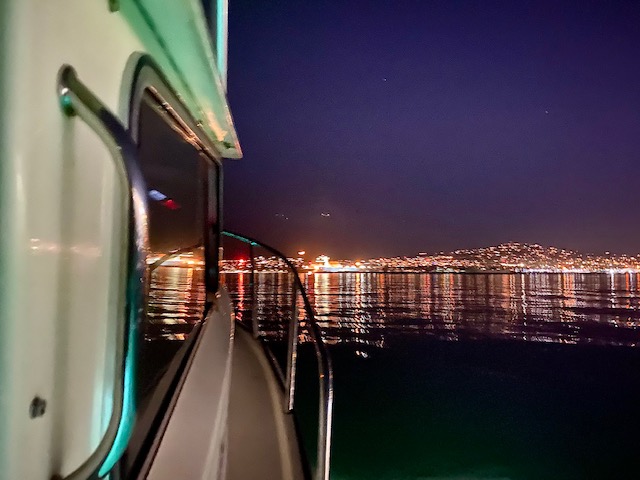 The moon was just dropping below the horizon of the lights of Pedro as I tried to catch it with this photo.  It is just above where the middle vertical steel rail support meets the rail.

I doubled down from the port side to capture the eery glow of green water that eminated from our fancy squid lights. 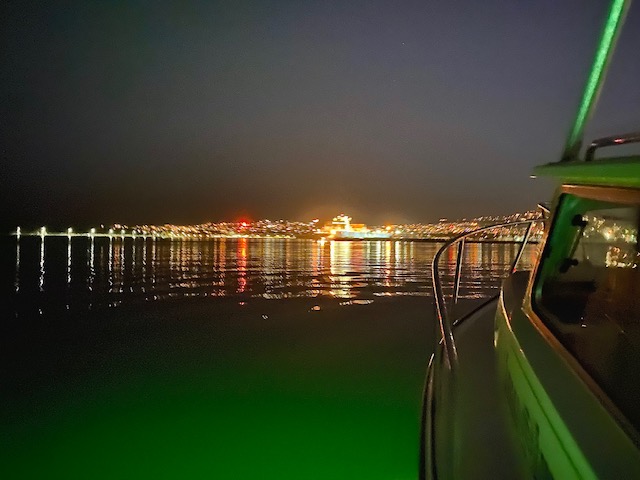 We were in the slip by 10 pm to start clean-up, which we finished at 11:30 pm.  The ride home, influenced by the never-ending 405 freeway closure, was an hour and a half.  After a gratefully celebrated hot shower, your reporter was in bed by 1:30 am. There were plenty of times in the bad old days of youthful middle age when we would still be at the island pulling on gear at this hour.

We ended up with a limit of a really nice grade of no-need-to-measure bugs.  The keepers were all females. 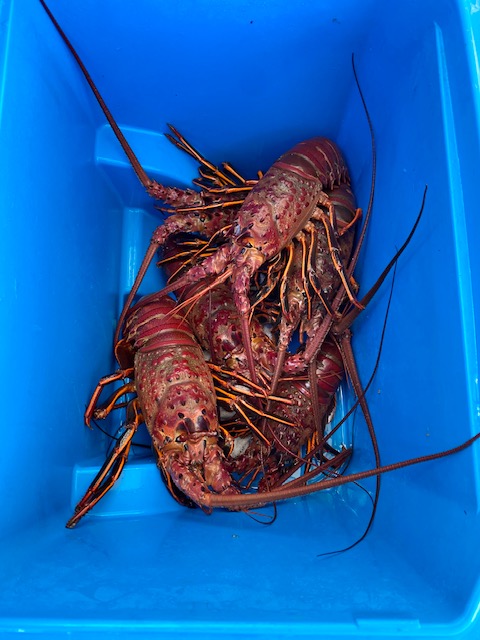 Sunday morning, we got to watch Tommy drop 8 seconds from his prior best to win the 200 fly before I made the boys come home and stand for the mandatory 17th birthday "Lobster Life" photos.

Wendyjo managed to rustle some slices of cattle and salmon to accompany the crayfish we wrangled from the deep on another lucky, easy outing in what has been a productive and problem-free season so far. 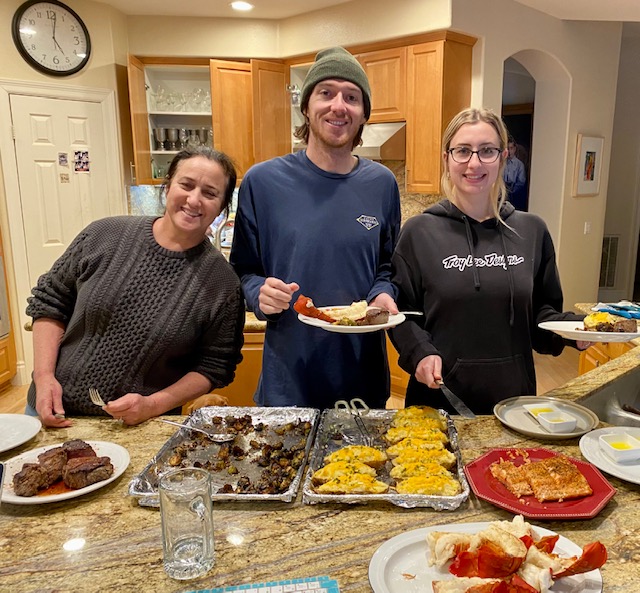 It was great to have Sarah join us in a birthday weekend combination celebration of quickness in the pool by the young fueled by craftiness in the big pool by the old and dry. Wendy and Sarah take a break from planning the wedding from behind a protective wall of rawk lobstah. 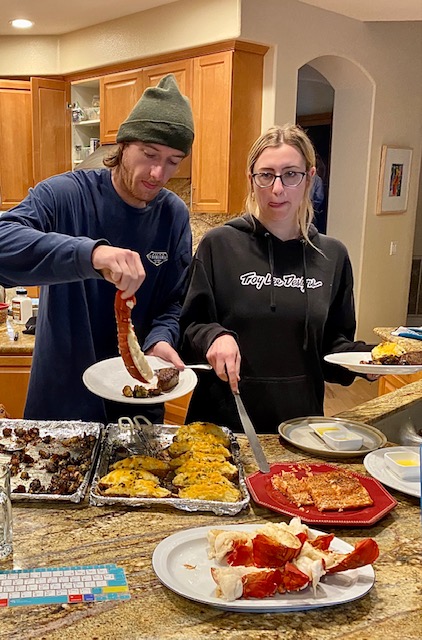 Sarah and Connor share the stupor of lip smacking numb-numbery in the food line up.

May your offspring be swift, your cows come home and your crayfish crawl toward the lure of your stinkpads as we stalk our way through this California dream that reminds us, whenever we want to notice, that 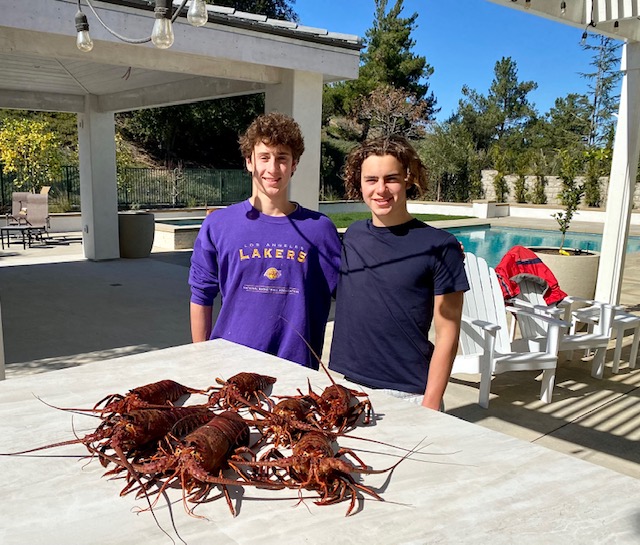