Bitterwater and the Hogs of Affliction

Your Reporter and son Tommy recently celebrated spring break and the approach of  Passover with the pursuit of the Hogs of Affliction at Bitterwater, nestled in the confluence of Monterey, Kern and San Luis Obispo counties just east of the location of James Dean's fatal crash.

It is a popular notion that wild boar are a blight on agrarian society, such that it is practically one's civic duty to go out there and keep the population of these omnivorous marauding creatures at bay.  Coupled with the common belief that boar are dangerous to humans, hog hunters can rationalize their act as performing a hazardous public service, even though pigs are just stupid unarmed animals and we have guns.

We left San Juan Capistrano at 8 am and headed up the 5 toward our ultimate destination at the Grant Ranch, where we had booked a hunt with Clayton Grant of Bitterwater Outfitters. These guys were really nice to us and the operation was smooth and friendly. 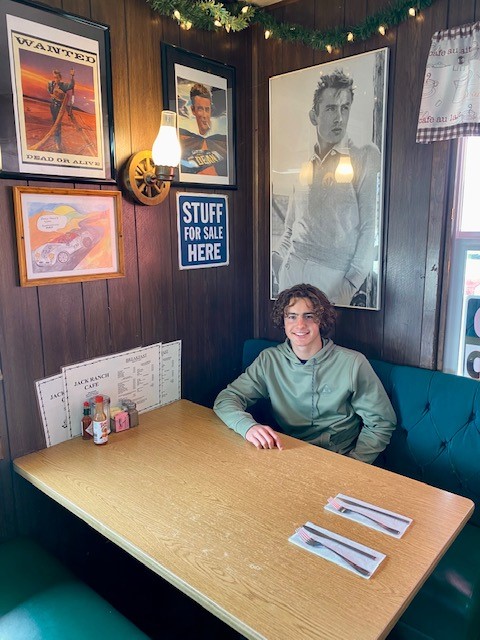 We grabbed lunch at the Jack Ranch Cafe, which is a shrine to the spot where James Dean wandered down that road to Eternity.

After lunch, we headed further north on an opposite-direction detour to take in the town of Parkfield. 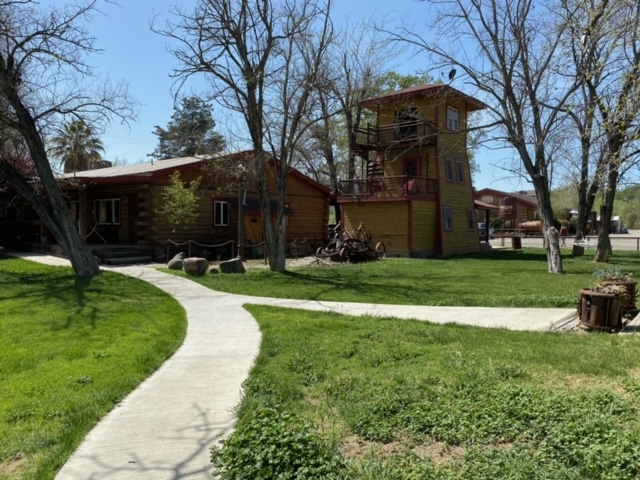 This colorful little destination straddles the San Andreas Fault and is home to the Berkeley Seismic Lab, which is little more than a shipping container with a label that reads "Berkeley Seismological Laboratory." 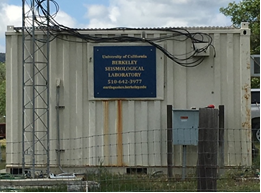 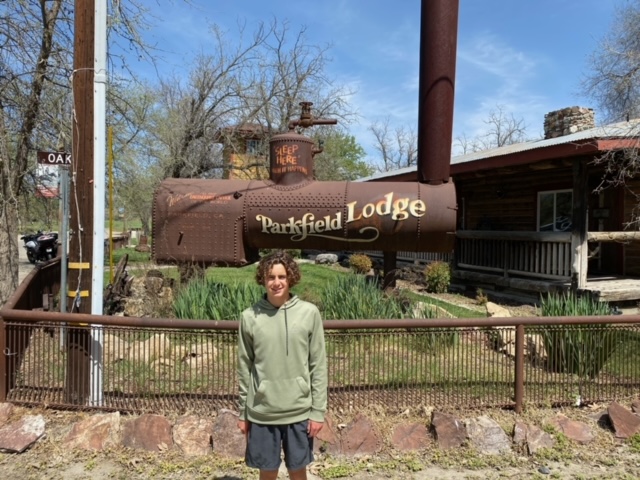 The Parkfield lodge is a fabulously whimsical spot well worth a visit.  Despite its modest claimed population of 34, Parkfield has an elementary school.  Local kids mostly have to spend hours on buses ...or ride their horses to high school. 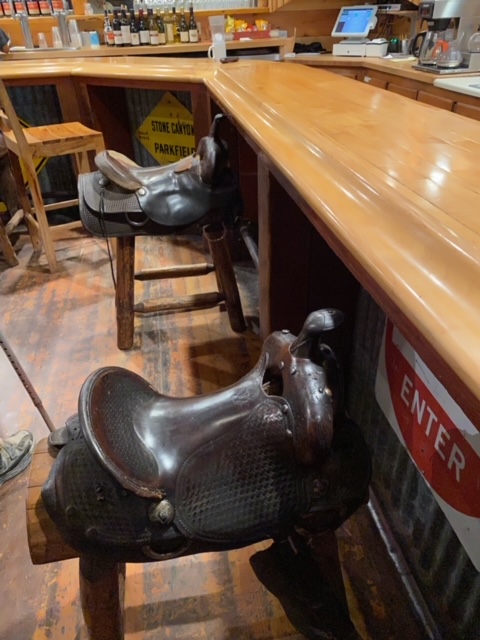 The Lodge has a number of rooms that celebrate an equestrian/earthquake theme, along with a bar featuring both stools and saddles, in case lodgers have not had a chance to drink from horseback.  Unfortunately, they only serve food from Thursday through Sunday, although you can still get a room.
They even have old seismology equipment randomly stored througout the place 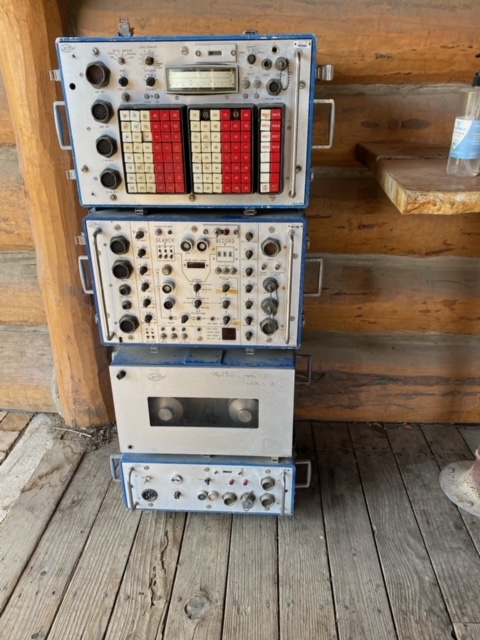 After a quick beverage and a tour of the grounds, we headed down the 41 to hang a left and drive along beautiful Bitterwater Valley Road to get to the ranch.  We were greeted by the ranch bitch, whose throne is adjacent to a great old potbellied stove. 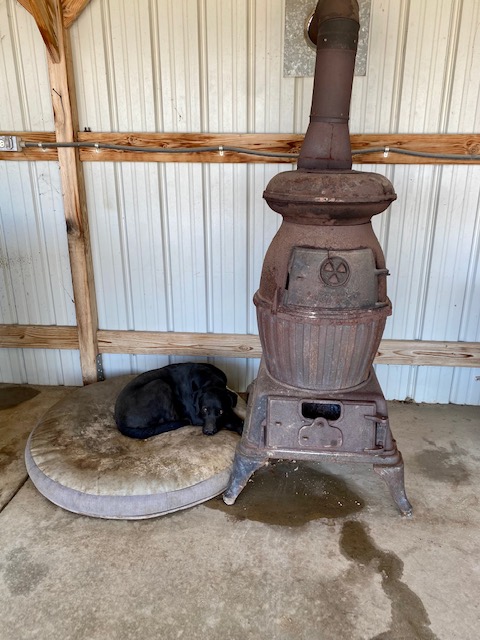 We  met up with ranch hand Terry and went down to the onsite rifle range to get our rifles sighted in.  Terry is a Vietnam vet who imparted considerable ballistic knowledge as he let us throw a few copper rounds down range.  He made sure the Belgian Browning  auto .308 that Tommy was shooting was sufficiently dialed in with hunting ammo, which can often perform much differently than the jacketed lead we shoot at the range.  As most Californians know, lead ammo is now banned in our state because condors will eat it right out of the box.

For all you ballistic mavins out there, Tommy was shooting Barnes solid copper 168 grain Vortex boat tail rounds.  I was driving the same bullet at a slightly higher velocity with my trusty old Winchester 30/06 model 70 bolt gun.

Below, Tommy pauses during tent set up near Bitterwater HQ. 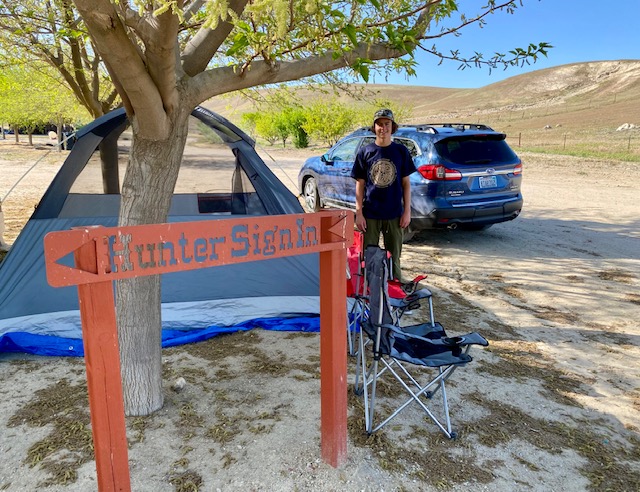 The ranch has an office, a nice set of bathrooms with a good shower, plenty of hookups for RV's and trailers, and a covered area with refrigerator, sink and tables.  Nearby is a big  shipping container cooler where the day's catch is hung to cool down prior to transport home or to a local butcher, which in this case is Creston Meats, described in more detail in the  HAMilton report from a few years ago. We enjoyed a night's sleep in our simple tent, punctuated by howling coyotes, hooting owls and the noisy bawling of insomniac cattle.  Except for a few security lights in the ranch area, there is virtually no light polution.  We were treated to a great night under the stars with a waxing crescent moon and a few meteors striping the heavens.

In the morning, we were greeted by our guide Jake.  We grabbed our rifles and climbed into the polaris-like ATV  in which we would be Ubering about.

We were following another group of three Korean gentlemen with whom we would be spending the morning.  One of them, who I think was named David Kim, owns a Korean BBQ and sushi restaurant in Corona. 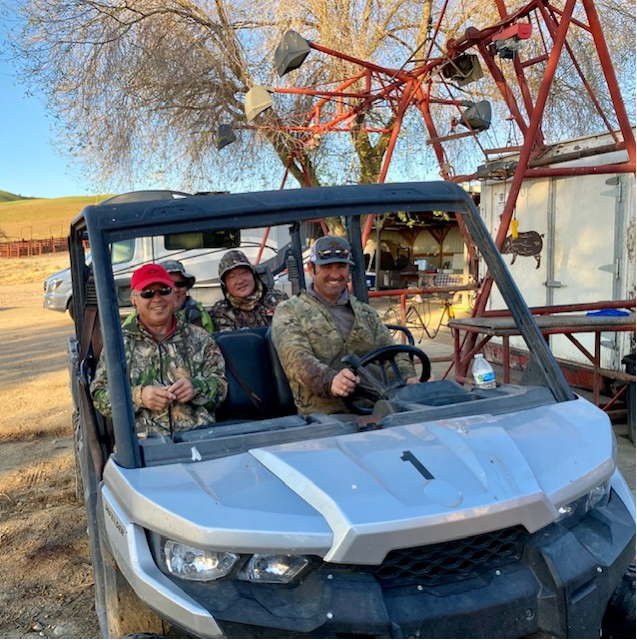 "Is he your grandson?"

The Koreans were hunting for "trophy" boar,  which essentially means a great big one with tusk-like cutting teeth.  A hunter pays extra for this harvest and the trophies are generally solitary.  Tommy and I were  after "meat pigs," which are usually under 200 pounds, more likely to taste good, and tend to travel in groups ( called either a "drove" or a "drift").  This meant we got to hunt in cooperative togetherness, but gave way when a big one was spotted.  The Koreans made it clear that they were also interested in retaining certain internal organs and glands from the gut pile.  We told them they could have dibs on our gut piles if we bagged something, so we became their grandson/grandpa buddies. 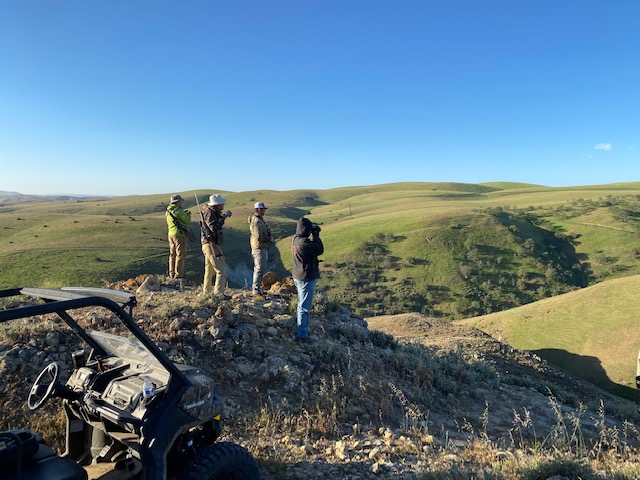 The hills were truly beautiful this time of year.  We stopped frequently to glass the hills for critters.  We saw quail, golden eagle,  assorted live varmints and a dead badger, but surprisingly, no deer.

The Koreans were in the lead vehicle, which I will refer to as the BBQmobile.They managed to dispatch a really big boar from astonishingly close range with a 30/30 lever gun, primarily because it was sound asleep when it was discovered and never woke up.

There was a great deal of sifting through the guts as the animal was field dressed, which became a bit tiresome.  Your reporter took numerous photos of this autopsy process. I will withhold from my readers the opportunity to stare at this yard sale of pathology.  If you would like to message me privately and say "please send me pictures of Korean men brailleing for a gall bladder in a pile of steaming boar guts," I can oblige you.

After our companions bagged their second boar and were engaged in dissection, we split off to pursue a group of four porcine pedestrians that were crossing on a trail below us.  Tommy lined up for a shot, but the pigs were already 250 yards out, running down hill and away.  It was early in the day and we decided to try and intercept them  at closer range by getting back in the ATV and driving to a point of ambush. 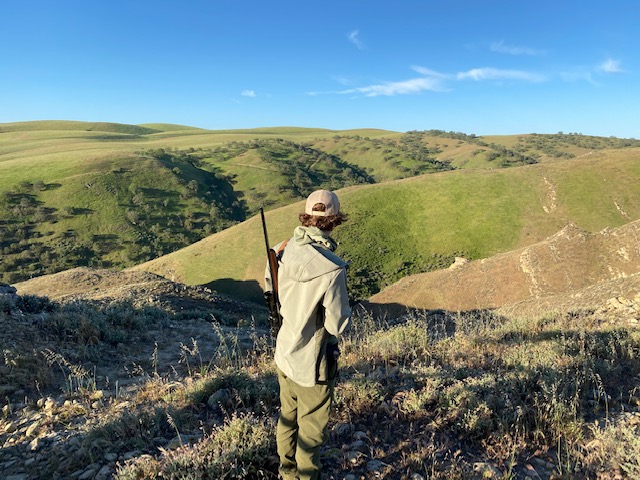 Tommy scanned the hills for the pigs that very soon entered our sphere of inflluence.

Once we got in place, we were somewhat surprised by an entirely different drift of nine pigs coming downhill in our direction.  The sun was in their eyes and the wind was at their backs, so we were invisible. Using shooting sticks is pretty common for this kind of shot. Jake pulled out an enormous  surveyor's tripod that made for a stable, if barely portable platform. 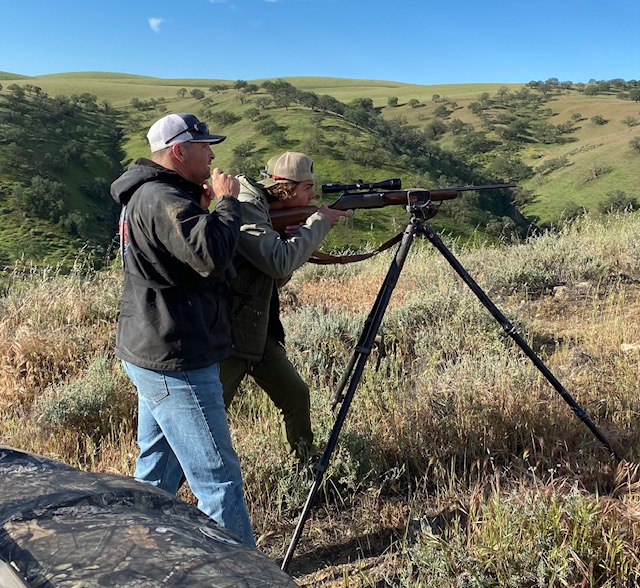 Tommy made a clean shot that entered behind the shoulder and out through the neck, as the boar was slightly uphill and moving away.  It dropped dead after a few paces.

Your narrator zeroed in on another boar that failed to leave the area quickly enough.  It did not fall right away, but instead wandered toward Tommy's fallen prey and then conveniently collapsed a remarkably short distance away.  I got it to hold still for good with a second round. 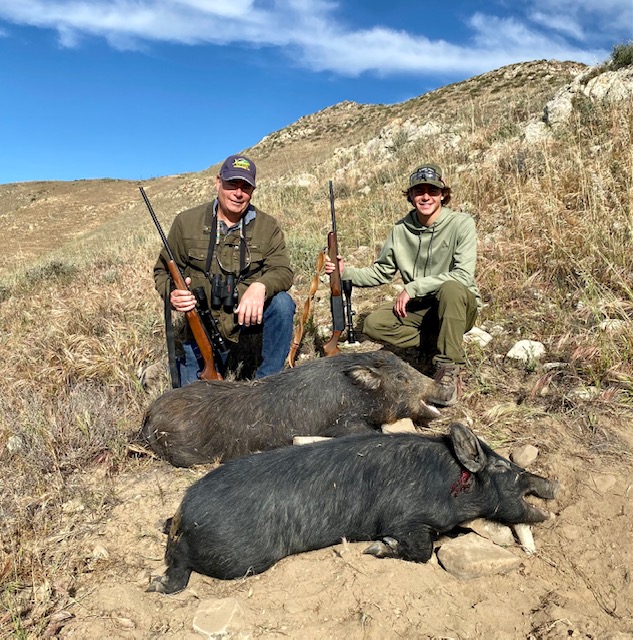 We did not have to move these pigs very much at all to line them up for this gross photo.  These guys were in the 140-160 pound range and had a beautiful layer of fat.  They should be tasty.

We were soon joined by our buddies, who asked us to take their picture with our pigs, which seemed odd, since theirs were clearly larger.  They told us that ours were prettier, but I think they just wanted to make sure we let them paw through our guts for the treats they harvested. We decided to help them find one last trophy and we were not disappointed.

They brought down this 300 pounder with a hail of gunfire in a steep ravine.  The creature fell back to the bottom, practically on top of the shooters. 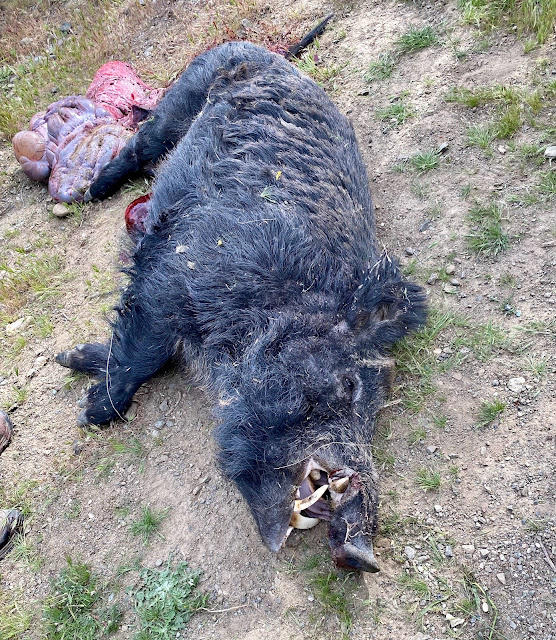 It sported a really huge set of cutters and did not smell like victory.

Importantly, it produced the largest pile of guts from which our friends harvested the glandular prizes that apparently help give them erections when mixed with whiskey.  We will have to take their word for it, as we did not stick around to verify the carnal powers of this medicinal offal.

After we got back to the ranch HQ, we got to watch our hogs get skinned and hung in the industrial sized cooler.  We settled up, broke down our little camp and decided to drive to San Luis Obispo for a late lunch with nephew/cousin Kevin Schmitt, who attends SLO and is a high jumper and javelin thrower for the Mustangs track team. 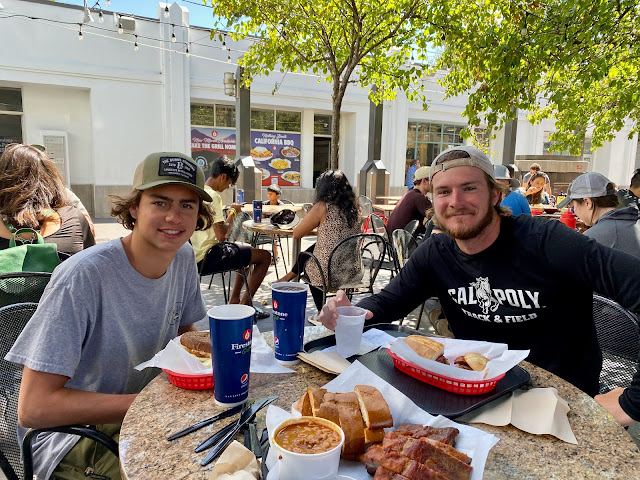 We picked Kevin up from track practice and had a great meal at Firestone Grill in downtown SLO.  Kevin was stoked that he and a buddy had just received the news that they were being flown to Ireland next month to appear on a game show called Beat Shazam, which I will now have to watch.  It was a great chance to catch up and enjoy some fine college-town chow before turning south to hardnose the highway back down to the OC, foregoing a stop at my beloved UCSB.  We figured the Gauchos are not fans of visitors with scoped rifles, even old alums who just want to catch the view from the Carillon tower and wouldn't harm a fly.

Well, it looks like we should have plenty of pork to share with both Elijah and the Easter Bunny as the Judeo-Christian holidays approach.

Spring is upon us, as are the dreams of emerging fish and game opportunities that beckon. 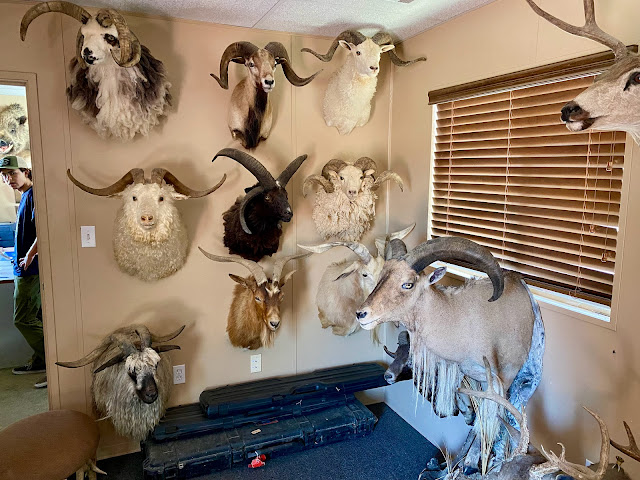 It is these visions that haunt both our waking and sleeping hours, invading our thoughts with the reminder that 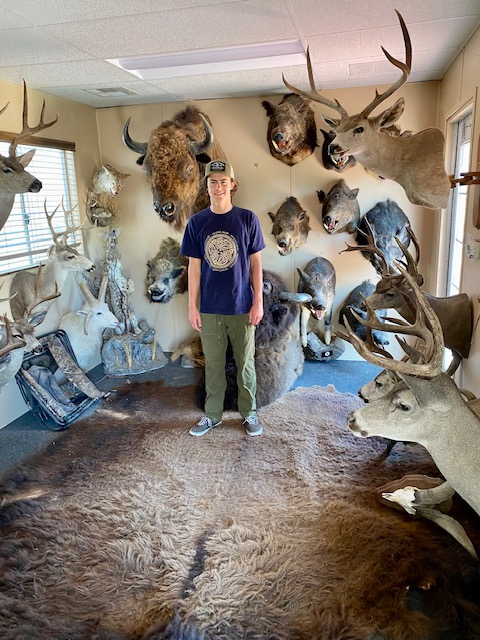