Carter and his son Parker joined my ten year old twins Tommy and David and I on a July 2nd trip out of Dana to look for the tuna and yellowtail others had been catching, at least on the radio.

We picked up a scoop of bait from Everingham’s and headed out on a wobbly 180 heading.  We hit 66 degree water out of the harbor and put the jigs out when it got to 68 a few miles out.  We took a big bend to the northwest, mostly dragging cedar plugs.  Kelp paddies were hard to find.  We got a few decent sized bonito out near the 267 and then turned our bend to the inside of the 209 and toward the 312.  We got into 69 degree water, which went up to 70 as we got into uncrowded, smooth water with increasing sunlight.  We dragged in with dolphin pods we encountered on the way, but they were not holding any tuna we could tempt with our jigs.  We threw bait on the rare and spindly kelp paddies we were able to spot, but got no love or meter marks.  We saw few bird piles and the life seemed closer to the coast than the path we chose.  We switched out the jigs to chrome headed tuna jigs and were rewarded with some kid sized yellowtail that came off a couple of paddies to make the trollers sing. 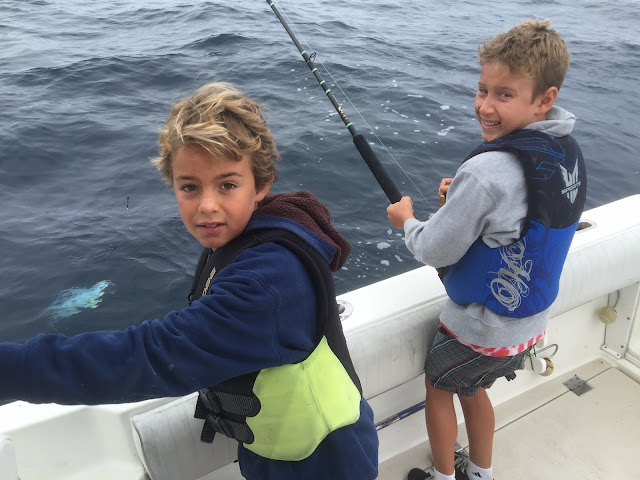 We bled them, as we did the bonito, and got them into ice brine in the fish hold to preserve sashimi grade quality. 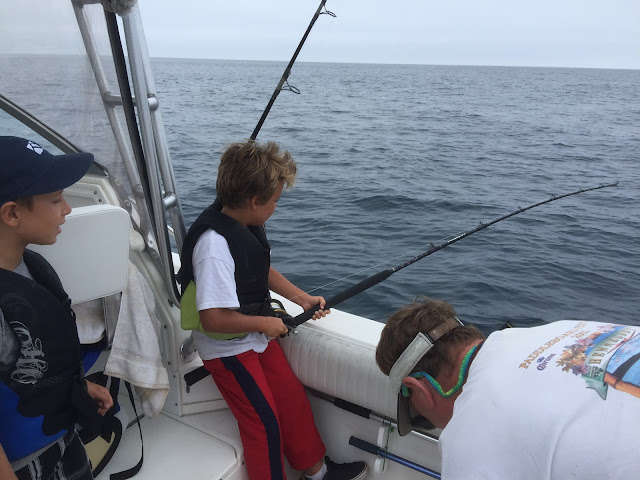 Right as we arrived right on the spot for the 312, a pile of big bluefin began leaping out of the water less than 100 yards to port.  There were no birds.  We stopped and threw bait and then striped the water as we tried to box the area, but it was all show and no go for the big fish.

Carter, who said he would bring the beer, managed to get 8 of them on board, and we nursed them like shipwrecked sailors as we ground through the day.  We headed toward Oceanside from the 312 and hit a big band of 72.4 degree water right about the time the afternoon wind started to stack the swell behind us.  The radio chatter became more active as the members of the San Diego fleet with enough beer on board began to give voice to ideas that they had just begun to form when they hit the mike.  Either they had caught their limit and were in danger of sinking from all the huge fish they were comparing or they were begging like three-year olds for the numbers from those who were bragging.

When we were just inside the 312, we got a screaming jig strike on the short corner, which was occupied by a chrome headed six-shooter with a dorado pattern skirt.  We felt like this was the right kind of fish and Carter was elected to turn the handle.  Pretty soon we saw a beautifully lit bull Dorado leaping far back in the wake.  After a few jumps that excited our youthful crew, Carter skillfully brought it flashing to the corner where I eventually was able to hit a good gaff shot after a few moments of pandemonium. 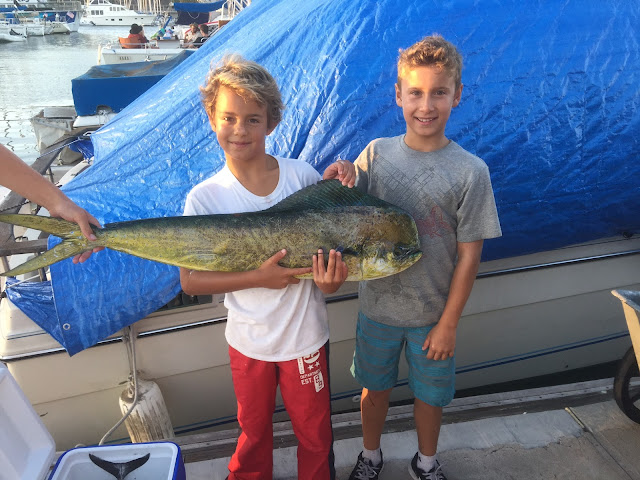 We hit cooler water as we approached Oceanside and then took the big left turn in increasing wind and stacks of close interval chop that put us in the ditch for the five hours of trolling and hitting paddies for nothing that lay between us and Dana.  The water was mostly 68 to 69 for this stretch, which was loaded with dolphin, several whales and empty kelps for a zig-zag stretch that involved water mostly 6 to 9 miles off the coast.  The ride home was a beerless roll that took its toll, but we had fish in the hold and that nice Dorado to go with the bonito and yellows cooling in the icy slush.  We were on the water 13 hours and heard much radio talk of folks who hit a bigger payday than we did, but it was a good day for us and raised hopes for the great season we are all anticipating.

The morning after a wonderful 4th of July BBQ and sashimi fest at our friends Capistrano beach house to take in the fireworks, Tommy and David went with me to get the rest of the gear off the boat and take a little exploratory trip without bait.  We made a similar, but much lesser arc, with no beer and found lots of dolphins that were under the wrong kind of birds and would not give up whatever tuna might have been sneaking around with them.

We got a nice bonito on the short corner. 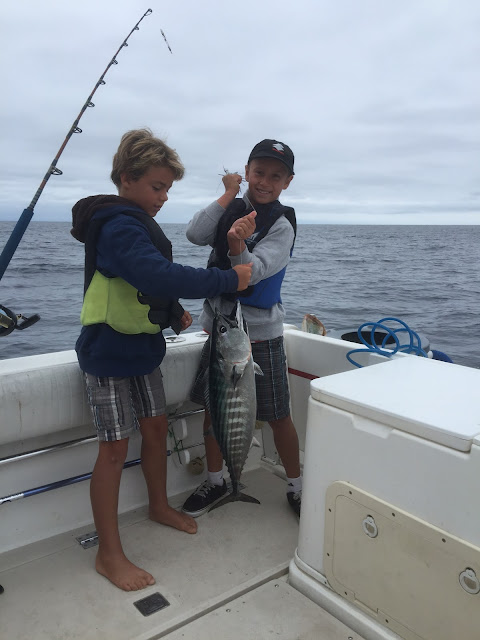 Then  we hit a couple of yellowtail off a good paddy near the 267 before turning for Cottons. 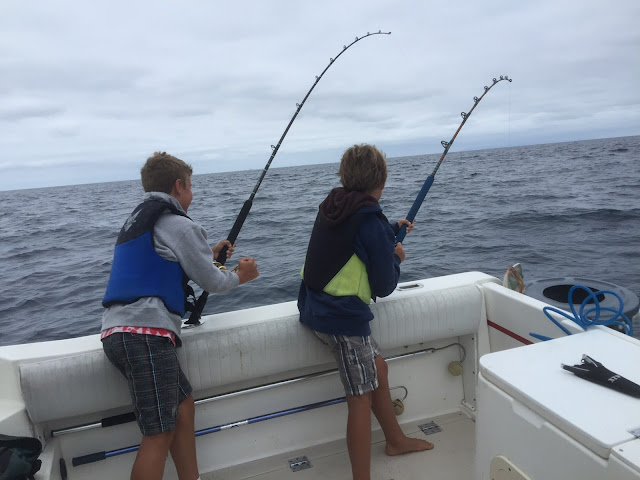 The water was 68 to 70 degrees and the fish seemed to key in on the anchovy pattern; dorado pattern or catchee style chrome headed small jigs.  We heard about a friend catching a 40 pound bluefin later in the day, but it was a short trip for us.  The boys did a great job of helping out and reeling in all of the fish, so we are all learning.  The ride in was much less onerous and we were home in time to watch the US Women’s soccer team defeat another Axis power.

At the fuel dock, Tommy schooled David on the art of fish picture postioning. 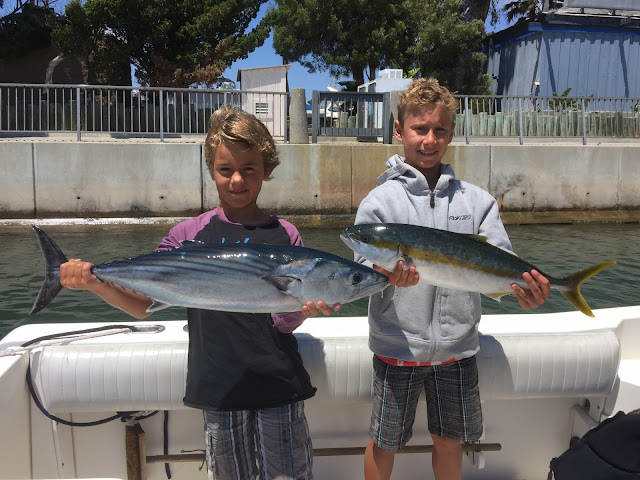 We had about 18 people over for a combination sashimi/Greek dinner to celebrate the future of the US economy and the summer of big fish that surely beckons.
We turned a lot of folks on to the idea that bonito, when properly cared for and expertly carved up, makes excellent sashimi.  Our guests, especially the many college kids who arrived to hang out, mowed through the sashimi like tuna on a bait ball.
The 4th means the summer is here.  It also means that it will be gone faster than anyone will want to see it get away.   The takeaway is to make your kids get out of bed and get out there while you can, because.... 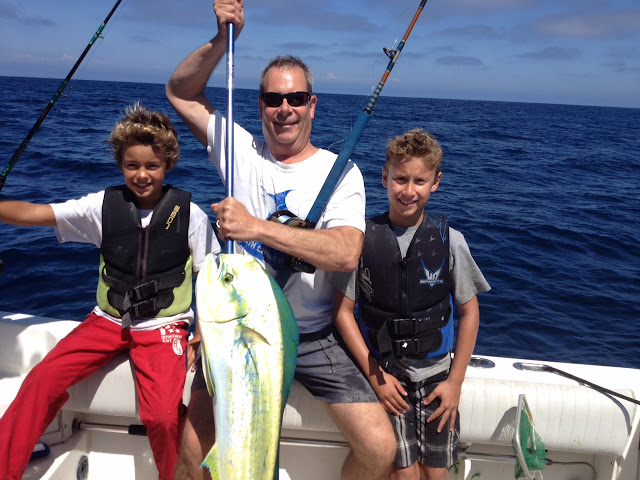