On Friday, July 10, my boat partner, Dr. Dave Mann, Isaac and I took the Finder out in search of the pelagics that have been all over our local waters.  We were loaded up with glistening gear and 60 pounds of ice at 5:30 am when we arrived at Everingham's bait barge to pick up a scoop of pretty big sardines and a few small mackerel.  We distributed them in our main and transom tanks, saving the port transom tank for bleeding out fish.  We made our way out into the calm waters of a breaking dawn that revealed lots of life in the form of birds and  seagoing mammals just off the headlands. 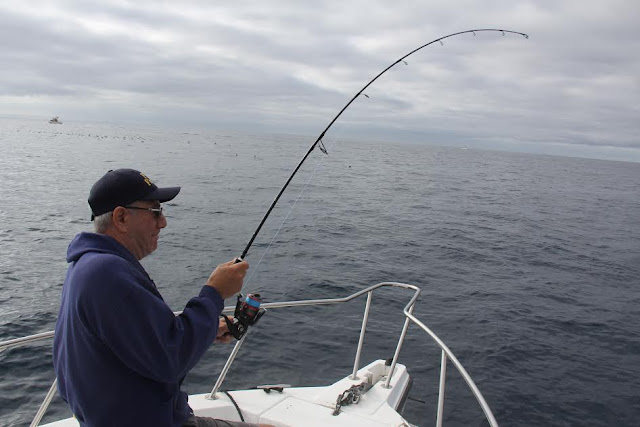 Meanwhile, Dave was remarking on how powerful his fish seemed to be as he eventually sat down on the bow seat to continue his give and take from a more relaxed position. The fish began coming toward us and Dave was furiously reeling to try and keep some arc in his rod and maintain a tight line.  The fish came to the surface about 20 yards downswell and I grabbed the gaff, thinking the moment of truth was at hand.  The fish had other ideas and began to take back all of the line that Dave had worked so hard to collect.  Dave was already  puffing and completely railed at the point where the fish began to make the predictable circles of defeat.  It came to color and remained about 6 to 10 feet below the bow for the next fifteen minutes.  The exhaustion  at either end of the rod and line was apparent, as neither the angler nor the fish seemed to have the strength to break the stalemate.  The fish circled on its side as I stood by with the gaff that I was concerned might rust apart before Dave summoned the will to bring the fish  up the last few feet and into range.

We stopped trying to gently encourage him and began to yell at him like drill seargents  to reach down and find the gas to kill this fish.  I was using our longest gaff and managed a head shot as the fish and Dave finally gave me the opening.  We got it into the bleed tank and turned to celebrate.  Dave could barely raise his arm for the high five, as we cracked the first of our “Simpler Times” discount beers from the cooler.  Dave announced that he was done fishing, as his arms had become as useless as those of an Irish river dancer.  No matter how good you are, taking a fish like that on a little spinner is a feat of skill and endurance. He richly earned his relaxed brew consumption as the fish cooled in the locker after we bled it out. The radio howled with inquiries from boats descending on the area like approaching Huns.  We were asked what kind of tuna it was.  At first, we said bluefin, but the other radio fish seemed to be straight yellowfin, so we decided our must be as well. 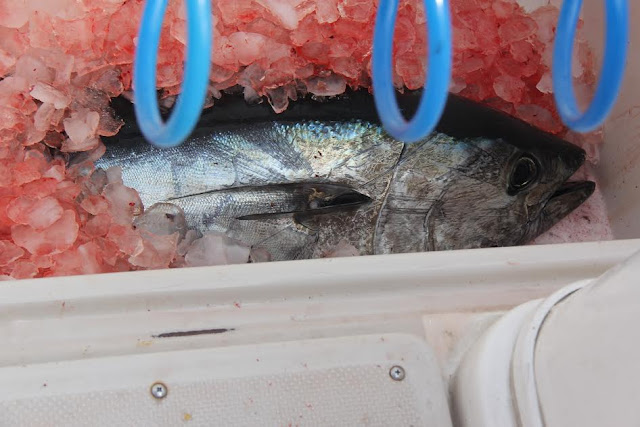 Dave's unclassified tuna gets some cryotherapy in the hold.


We fished the spot for a while longer, until the encroaching fleet pressed us to the point where we were just looking for a way out.  We found a path by going in and toward Oceanside, where we stumbled into a finning mako in the calm water.  We put out a live mackerel on our biggest rig, which we affectionately call the “pig.”  It is a 50 wide Tiagra spooled with 200 pound spectra below 130 pound mono.  It is a no-nonsense rig.  We kept trying to swing the bait into its path and each time we saw the shark, it looked bigger.  We were glad to have the pig on our team.
We slow trolled the mackerel and the shark angled sharply into our wake and threw off a wake of its own as it zeroed in on the mackerel before it inexplicably sunk out.  We stopped the boat and began to rig another mackerel, slab-style, to a second shark rig as it seemed this mako was refusing our live offering.  As soon as we had it ready to go, the clicker on the pig began to growl as the shark decided to eat.  Isaac got on it right away and began to turn the handle as the rod arced over and the line started leaving more rapidly.  Suddenly the rig went slack.  Isaac reeled in and we observed that the shark had bit clean through our heavy single strand wire leader.  We put out the other rig for a few minutes before we admitted our loss and continued to find our way out of the fleet to make our way to the kelp lanes we had charted to the outside the day before.
We put out the trollers and began to rotate jigs as we found 69 to 70 degree water below the 267.  We stopped to drift baits and chum on several paddies that were not holding and dragged by several more without drawing strikes.  Isaac was glassing the horizon from the roof as we spotted whales and dolphins to key on. Dave began to regain strength through beer rehydration and got fire up for the hunt again.  As we swung by another paddy,  Isaac came off the roof like a monkey, telling us there was a big school of dorado swimming by the paddy, which was one of several in the immediate area.

We got the trollers stowed and crept on the paddy from up swell.  I shut the engine down and  pinned on a huge sardine that seemed pretty lively.  I made a long, spinner-enhanced cast that landed three feet to the left of the paddy and was almost instantly rewarded by a big take that screamed line off my reel.  I let the rod load up and pulled back to a solid hookset.  The fish went uphill and I was able to walk to the bow and get out of the way.  To our surprise, no other hook ups followed.  My fish showed us some big shoulders as it began a vertical dive that betrayed the head shakes of a yellowtail.  After about ten minutes, I had him flattened out on the top and Isaac sunk the gaff for a bloodless head shot.  It was a fish worth celebrating.  We made a few more drifts through the kelps in the area before heading toward Dana.  We switched all our trollers out to Rapalas in an effort to drag up the dorado that had breezed through ahead of that  big yellow, but we got no more love.  We had two big fish, so the troll home was not so desperate.  We saw many more whales and several small pods of dolphin. 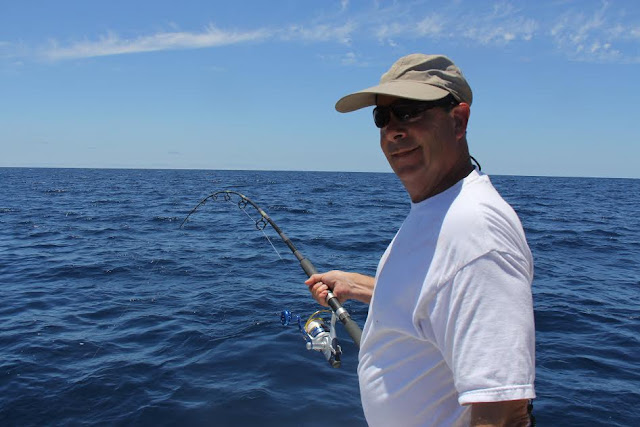 Happiness is a loaded rod and a singing reel


As we were on our way in, I decided to get a head start on the clean up by soaping up and scrubbing  down the cockpit. The angle of the deck to the stern would be ideal with the raw water hose down to follow my brushwork.  That way, the final freshwater rinse at the slip would be brief and easy.  Dave was driving and Isaac was on the bow, getting some much needed sun.  Isaac generally refuses this open water washdown task, as he claims it increases the risk of slipping on a soapy and moving deck.  I might have been thinking that this picky attitude is just a rationalization for laziness, when the boat rolled in the swell and I suddenly encountered the starboard gunwhale with my ribs as my soapy shoes went the other way.  I almost went in, but managed to grab one of the trollers and briefly lingered in virtual man-overboard scenario with very little air in my lungs.  The crew, whose attention was drawn by the sound of my impact, stopped the boat and sought assurance that I was undamaged.  I was a bit shocky for about a minute and pissed at myself for a lot longer.  I saw a doctor yesterday and he ruled out any damage to my lung.  I have cracked my ribs on a couple of prior occasions, so I know that the next few weeks will involve trouble sleeping, laughing, or my customary heavy breathing at Wendy.
We got back to the house to drink some well-earned scotch before we cut up and divided the fish. Even with half of the catch, we had many people over for BBQs and sashimi fests over the next two days, with some still going into the freezer. 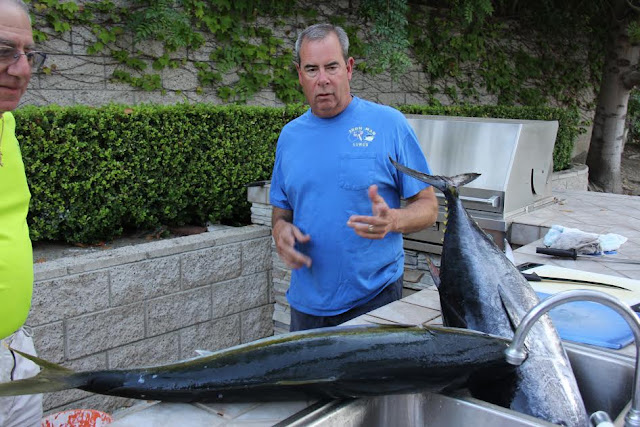 Our skipper contemplates the wet work ahead


These fish are certainly starting to show up, even as I continue to give myself setbacks.  While a cracked rib may be a drag, I have not taken enough damage to keep me off the water.
These fish are here and the bite is getting stronger, so I am like the Yorktown in getting back into the action, celebrating the time we get to have, and the natural fact that …. 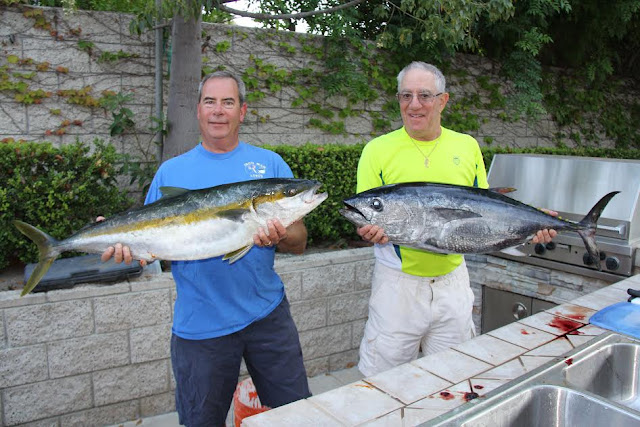