Big Weather and Five for Five On Evening Tuna


On Saturday, July 18, Isaac and I took Jade and Shane, two of our summer clerks, out for an electrifying day of thunder and lightning on the high seas below Dana point.

We got into line for bait by 4:30 am and were headed toward the area below the domes by day break. We dragged lures on a few dolphin pods outside the harbor, but did not fart around for long. We got into a drift and started our chum line, while everyone started up with the early morning chatter on the radio.

After while, Jade got bit on a fly-lined sardine and we belted her up for the siege that fish put on. 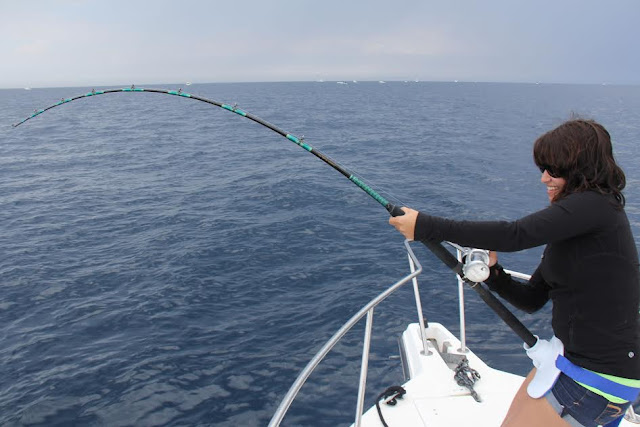 Jade pulled for a while before calling in for relief pitching from Shane. 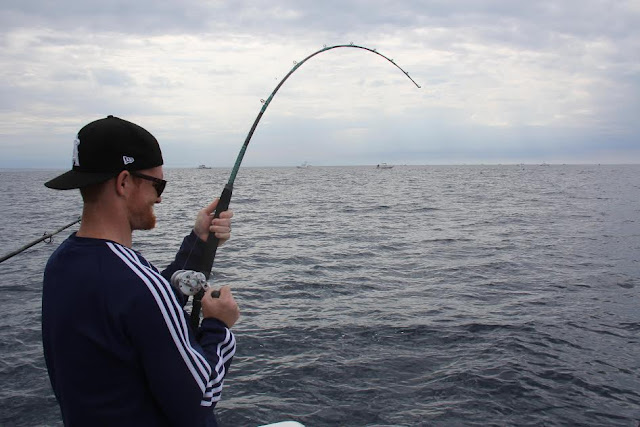 The clouds are building on the horizon as Shane turned the handle.

This tuna, after forcing us through a series of ballet dancing, rod handoff moves around the boat, managed to get away at the point where it had begun to circle to color.  We then took notice of one of fly-lined rods getting spooled to the knot and we lost another tuna after we managed to wind about ten yards of line back on with heavy pressure.

We fished the area for a while before heading out in to ominous clouds to the south.  We dragged our jigs steadily off shore as huge thunderheads and lighting flashes beckoned us.  We looked for better weather and birds outside, as the lighting and cracking thunder enveloped us.  Jade asked me to promise her that she would not get killed, but I demurred, saying that our summer clerkship program involved a certain amount of lowering  of their expectations.  I advised her to eat some more chips and sandwiches and look a the dolphins and whales we were seeing.  That way her final memory of the sea would be more positive and sublime.

We found a few pockets of  decent weather, but the worst was still out there.  After burning fuel trying to get electrocuted further offshore, we decided to  become chickens of the sea and head toward terrestria.  At least we were not burdened by a fish cleaning chore.  While we were still ten miles out, the rain became torrential, yet warm. We all crowded inside the enclosure and consumed tall Stellas to maintain personal ballast.  By the time we got into the harbor, the downpour onshore was in full swing.  We stashed the rods and hauled ass for beers and burgers at Hennessey's, as I had vaguely promised our concerned young anglers that I would at least bring them back alive for hot food if they did not land their fish.  It was a decent venue to decompress.  The storm continued into the next day, as afternoon cells swept in from the south and caused flash floods further inland.

On July 21, Isaac and I headed down to the Finder to clean up our gear and wash the boat down after two days of heavy rain on the water. We had been on a scouting trip on the 20th and found some giant tuna milling around about 35 miles off shore, but these majestic creatures did not want to die for us and we fled home at 30 knots as the afternoon storms without lightning caught us about 20 miles out.  It was raining so hard that the fuel dock would not pump gas.  The next day, we could not get the girls or Tommy and David to join us, as it was a trip that only promised chores and a probable boat ride.  The weather had changed to just plain hot, so was a good day to hit the surf and that’s what the other kids elected to pursue.

Isaac called up Matt when we decided that we would poke out to take a look around in the balmy, clearing weather at 11 am. We headed southeast toward the domes at trolling speed, about 8 miles off shore.  There was a smattering of boats off San Onofre, and another group down by Las Pulgas.  We made a couple of drifts, but decided to keep rolling.  We trolled outside into increasingly warming water.  At about 12 miles out, we peaked out at 76 degrees..  We fished a couple of dolphin pods without drawing strikes.  We stopped on a couple of paddies and chopped and chummed while drifting baits before putting the trollers out and moving on.  We bent back to the west toward the 267 in water that was consistently above 73 degrees.  We found a few spots of puddling fish that would not go our way off San Clemente and the overall activity of the ocean seemed to increase, with white terns much more active and a general feeling of building “fishiness.”

We found a real nice paddy about 11.5 miles off Dana and shut off the motor.  We still had  most of our bait and chopped and chummed the recently departed back into the food chain.  We drifted for nothing, but marked fish 75 to 100 feet down.  Another boat, the Steadfast, came over to our paddy.  This always raises the potential for territoriality, but we decided to take a cooperative approach and remained in radio communication with their crew as we each drifted down a side of the paddy.  We ran uphill, cut the motor and drifted by for a second d pass.  I was instantly rewarded with a take within five seconds of throwing a pretty big fly-lined sardine on a 2/0 owner circle hook and 25 pound line. 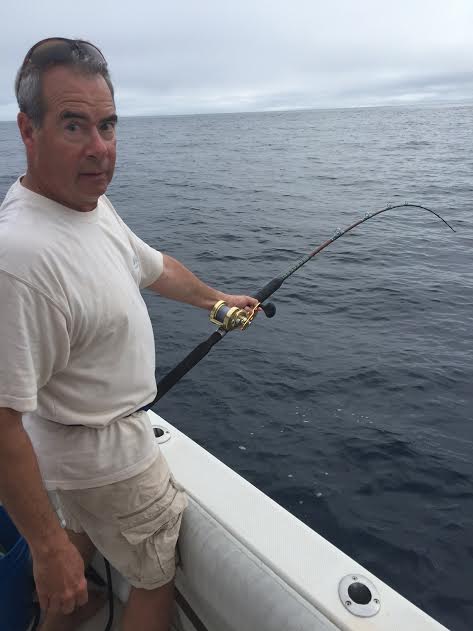 The fish quickly took my fluro/mono  down to the spectra backing and it felt like a tuna.  After a few minutes I had him close and Isaac sank a nice gaff shot to the head.  We were on the board.

Isaac, noting the meter marks, decided to drop down on our power jigging rig, which is a 8 ½ foot Calstar stick with a Torsa 20 spooled with 80 spectra and a top shot of 40 pound. He let a flat fall jig flutter down and was picked up close to 100 feet down. He wound down and was wired on another 30 pound yellowfin that he dispatched with brutal efficiency on that powerful combo. 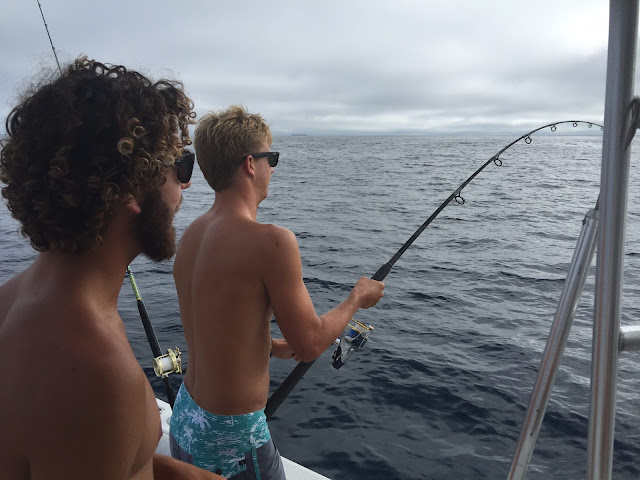 We went up for another pass and Matt got lit up on the power spinner rig, with spectra and a short fluro top shot.  Although he did not want to be seen turning the handle on a spinner, he did anyway and started power pumping his fish to the boat, where Isaac introduced it to the gaff.  In the meantime, I had hooked up again on a fish that ended up towing our boat around on 25 pound line for over 20 minutes.  This was despite the fact that I tightened down the drag to a dangerous level once I got back all of the spectra line and was down to 100 yards of mono.  Although it turned out to be our biggest fish by a couple of pounds, it was under 35 pounds and resulted in a certain amount of criticism for taking so long, even after my orthopedic limitations were considered.  The Steadfast crew was also wired and the action was just getting hotter.  While my fish took me around the boat several times (I tried to stay in the bow as much as possible), Isaac got lit up again. 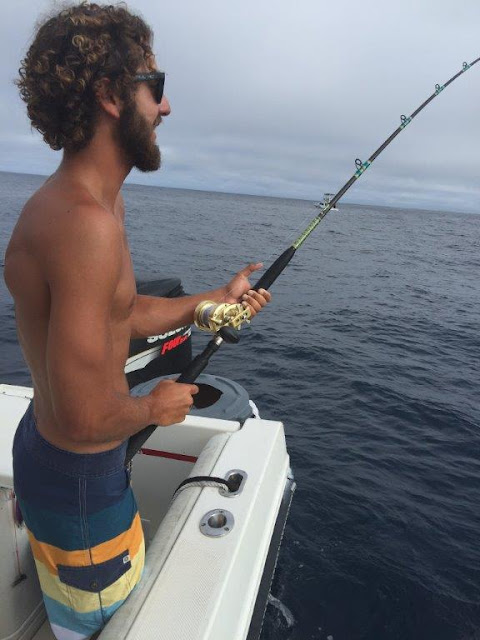 Another six pack boat, a 34 foot Radovich with a crew of anglers, some of whom had clearly been well fed by their mothers and wore baseball hats on backwards, cruised right in on the paddy.  At least they were chumming the area to get some meat for their customers after putting themselves between us and the paddy we were working.  In the meantime, with my fish straight up and down and Isaac’s fresh one still quite active, we encountered a tangle that cause us to think that we would lose both fish to line-wrap.   We went tip-to-tip several times to try and figure out which way to rotate our rods as the fish continued to circle each other and make things worse.  We eventually guessed right and, after an excitable exercise in rod twirling, I was back in the bow with mine and Isaac's began the death spiral to the gaff than Matt had waiting in the stern.

We got both fish in the locker and were five-for five on that spot.  Meanwhile, the Radovich hooked a 10 pound dorado that flopped all over their deck when they finally got it aboard.  One of the crew grabbed a baseball bat and began pounding it into fish meal on the deck.  We could hear the impact and watch the blood splatter from our spot by the kelp when we ran up for one final pass.  In the meantime, another six pack boat, the 44 foot Pacifica “Comanche,”  rolled up on all of the excitement and  parked on the kelp  to drift for its customers.


It was getting late in the afternoon when Steadfast and our crew said our goodbyes to each other as we left the area in the hands of the professional skippers who had barged in late.  We dragged our lures and fished a couple of paddies in the sunset, but really were out of time.  The water was extremely fishy within a mile of the headlands as we used up the last of our light. 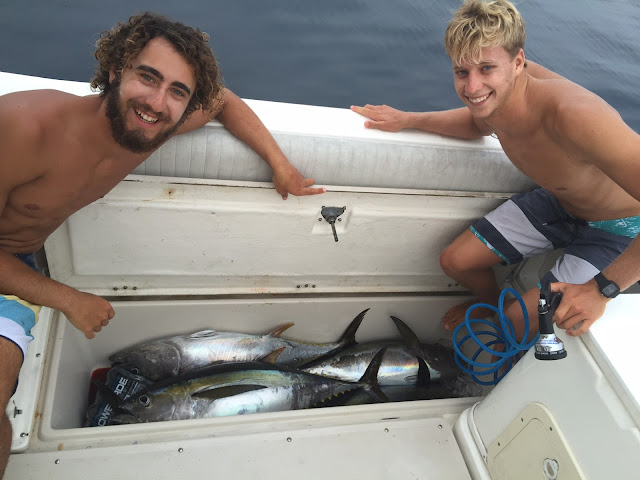 We were able to gas up after dark because the Fury was there adding 900 gallons to its tanks.  We had a chance to chat with Rick Doesburg, one of my favorite skippers in the world, about how this season was shaping up and discuss our mutual hatred of seals.  We did not get the boat cleaned up until nearly ten pm and then spent a couple more hours processing 150 pounds  (about 80 pounds of fillet) of tuna at home.  I fell into an exhausted sleep well after midnight, but it ended up being a pretty good day.


Isaac went back out on Wednesday with our partner David and got another yellowfin that towed him around like mine had, so he is a bit more sympathetic to the elderly now.  When my kids turn ten, I generally make them fishing poles that are distinctly their own.  I just finished the rods I was wrapping for Tommy and Davey. 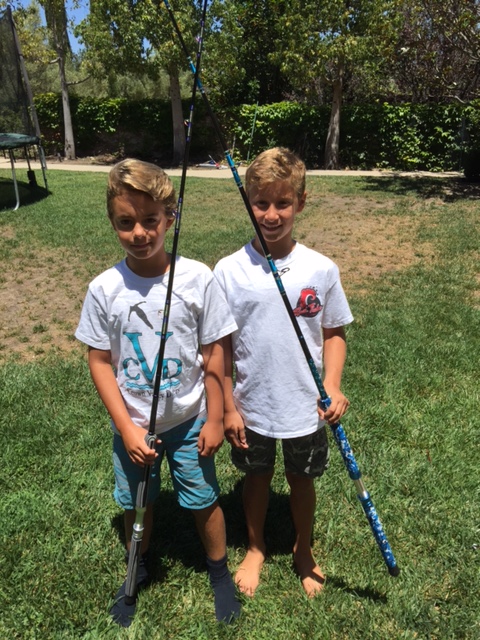 The lads, who are roughly the size of chimpanzees (I always wanted one), are being shanghaied into the current offshore scenario that may be a bit above their current weight class, as this season is a remarkable one that may not come our way in the foreseeable future.


These Mexican pelagics that are such a rare treat may stay for a few months, but they are within 5 miles from home port as I type this.  This is a ridiculously proximity for something that is mostly never around, so get at it while you can, because 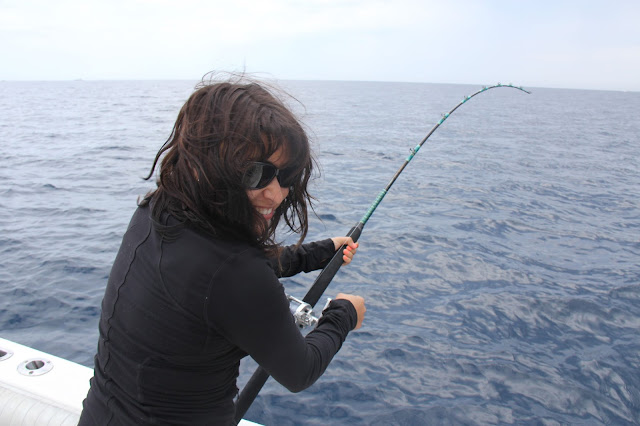