Insecticide On The Water 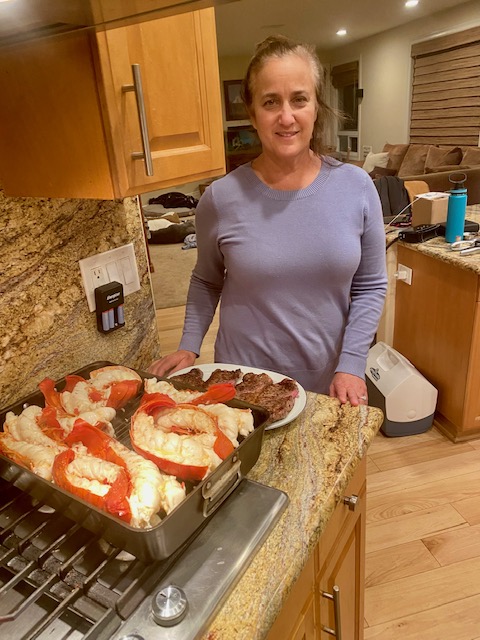 It seems I have a lot of catching up to do in my reporting, so I will use this chance to cram multiple experiences into a random stew that a more thoughtful writer would dedicate time and effort to explore on a prompt and individual basis.

I woke up early Friday and took the dogs our for a walk.  The air was cold.  When I picked up the dog doo in the inverted plastic lawn sausage presentation bags, they warmed my grateful hands.

Secret Skipper had invited me out for my first lobster trip of the year after I got done faking my own death to avoid going to work for a couple of weeks. 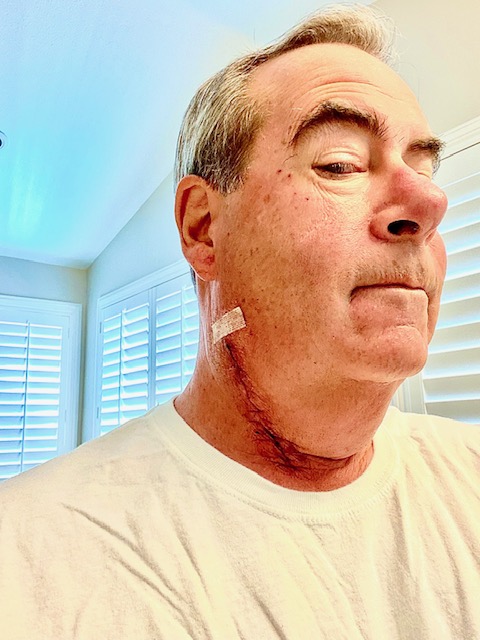 It was a spectacular fail in my attempt to portray a Pez dispenser at a Candy themed Cosplay festival.
I tried to persuade Wendyjo to let Tommy and David loose to assist the aging core of our team and partake in potential bounty of this lobster raid, but dedication to the regimen of competitive swimming and a disappointing resistance to the lure of truancy prevented them from joining us.  Skipper would have to make do with your narrator as his only sternman.
Earlier this month while David and Wendyjo were touring back in Jersey, your reporter took the blue collar route with Tommy and Tash pushing down to Woodland's club near Mexicali for a satisfying day of chasing pheasant and chukar.  Tash was great on point and retrieve, Tommy hit his shots and we cooked up a bunch of tasty game bird dishes.  We even got to drop off a couple of our victims with Rich and Rachel, who we knew would do culinary justice to our harvest. 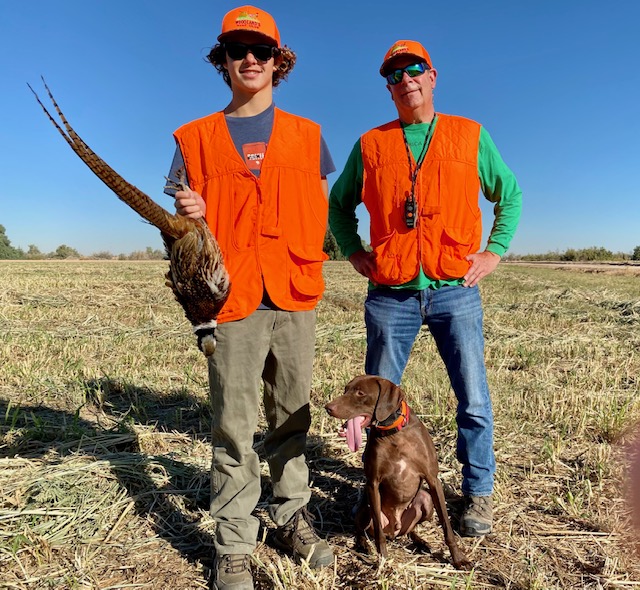 Your reporter has also neglected to file a report following our lone tuna trip of the summer, so please allow that event to be reflected in the photo below.  Skipper got this 70 pound bluefin on a fly-line 'dine about 15 miles from my living room off Dana Point. I got there by driving up to San Pedro and then leaving with Secret Skipper for a pre-dawn run back down the coast to our backyard from Cabrillo Marina. 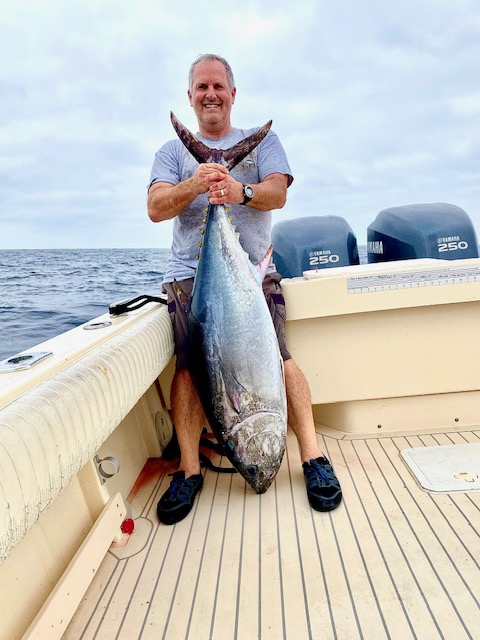 This fish took enough line to force us to chase and back down on it before Skipper recovered enough of his spool for me to get a gaff shot for  a most bountiful harvest with our friends. 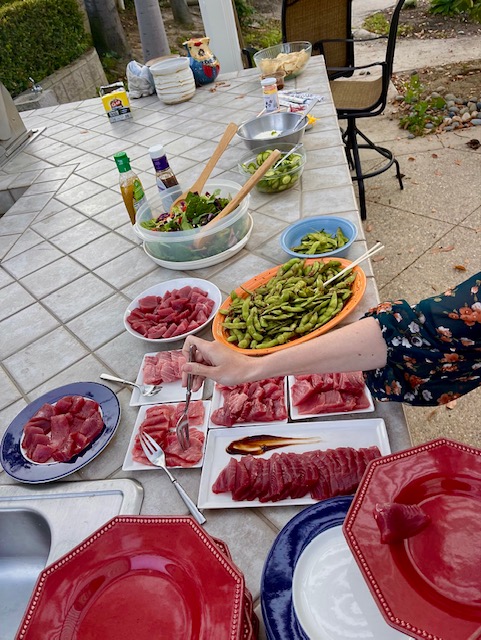 That bluefin was a hard-earned chunk of sashimi. I am really just trying to get the non-reporting-of-this-tuna monkey off my back, since Skipper had to grind so hard without literary recognition due to my avoidance of the hobby-driven keyboard during an otherwise work-infested summer.

The story to which I am about to return is about killing something else.

Skipper and I headed out to the Island of Romance after picking up a scoop and a half of mixed sardines, anchovies and a tale or two from Mike, the master baiter at the San Pedro Bait barge.

The trip over to the island at 1 pm shouldered us into a persistently cranky swell and wind chop out of the west.  We stayed bundled up on a slower than usual passage and started cutting bait and making the gear ready for a deployment that would be complete at 4:30pm. 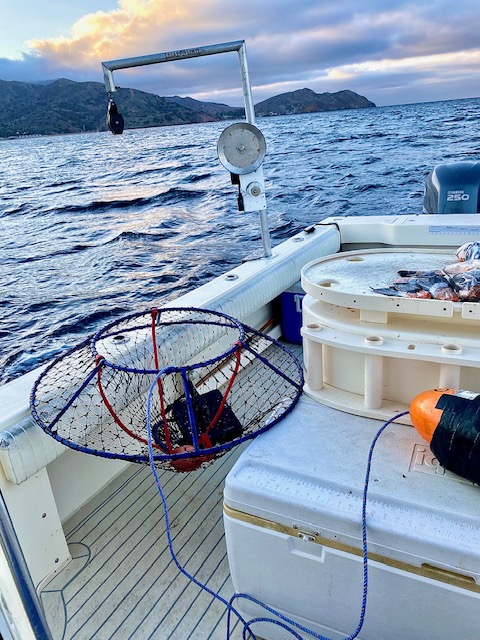 After scouting the bottom for structure, we placed our ten hoop set on a steeply rising tide with no moon.

We put out three in the 250 and deeper range, three in the midrange under 200 and four in 150 or less. The wind chop was still capping in the water where we made our deep sets in the 250 foot range.

The current was ripping as we motored downwind to cast for some bass in shallow water. 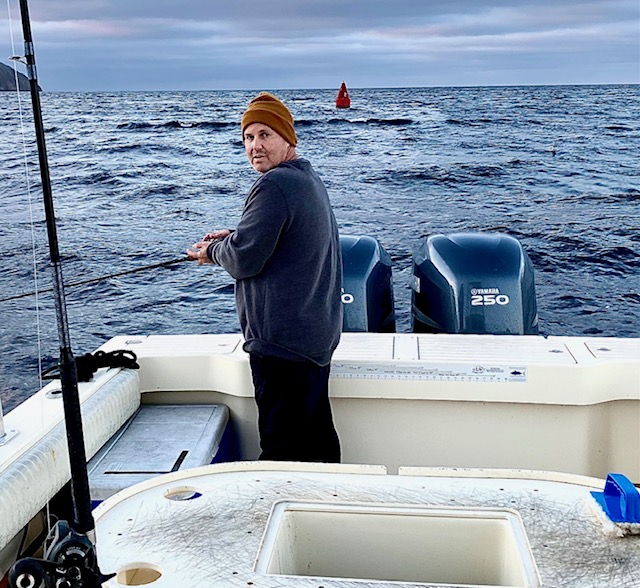 The wind was blowing us east at trolling speed and casting plastics on heavy heads resulted in no bites and cold hands.  I eventually hung my swimbait on the bottom and snapped it off when the drift stretched it to the tink point. I was happy to wind in the slack, rack my stick and go into the wheel house to get out of the wind and into my sandwich bag.  Skipper joined me on a pre-pull munch-out a bit later as the gray began to envelope a pale sunset.

When we started pulling at 5:45, we discovered that the deep rigs were all "pegged," meaning that the wind  and current had blown the buoys back to the point that the counterweight had retreated into the back of the buoy while the hoop and current were combining to tug the lighted float below the surface.  Skipper did a great job of pulling us into the wind to try to take up the slack on our retrieves.  The tension on the line was difficult to overcome in getting the rope up through the yard and mast pullies and then down into the newly upgraded line wheel on the Bagram.

The first four were empties, but we knew that we were on the bottom because of the big turban snails that festooned the mesh like Christmas ornaments.  It was starting to feel like one of those "paying your dues nights," with the  stiff, cold breeze and stubborn tug-back  from the resisting hoop lines.   I reminded myself just to be glad I was standing up and back out here.

Finally, on number 5 in the midrange, we got a real nice crawler and were on the board.  We got another whose size condemned it to the dubiously named livewell from the 120 foot range before moving into the last two of our shallowest  tries in less than 100 feet.

The wind was starting to die down and was significantly less brisk in the lee provided by the shallowest drops.  These last two retrieves were not pegged and we were able to get slack on the line before pulling on what skipper declared to be a heavy load as he sampled the resistance to the wheel.  We both peered hopefully into the depths as the hoop started to come into view in the milky light that seeped into the water from the flickering light housings in our hull.  We had dropped these last two in an area of heavy kelp, which often creates a bit of  friction through which to drag.

"It's full of kelp and that what's causing the drag", Skipper noted as we saw a proliferation of brown against the mesh of the ascending platform.  The hoop popped into the surface lights as the "kelp" mutated into the grunting, insect forms of  our quarry, causing both of us to hoot like apes as I hauled it over the gunwhale and onto the deck.  Seven legal lobster, including a couple of three pounders, flopped about and were deposited in the tank amidst high fives over the sudden reversal of our fortune. 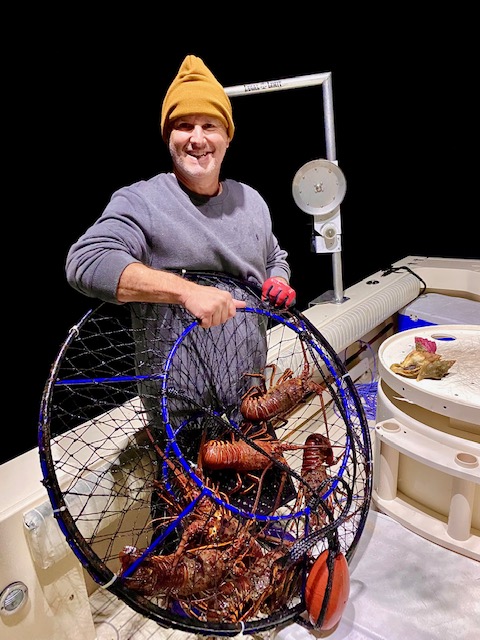 Like the lucky tailor from Brother's Grimm, we struck Seven at a Blow with this epically stupid pull.

This haul was a full limit in a single lift and was a new record for your narrator and Skipper.  Suddenly, we had 9 bugs going into our last pull of the first set of the night.

We were now completely energized from the cold doldrums that had so afflicted us a few minutes earlier.

We got the last hoop line onto the wheel and Skipper sampled the resistance.  "This one feels even heavier than the last."  We got hopeful again and beamed our expectations down into the darkness below.

This time, as the hoop popped up to the point of my interception and removal from the pulley, the top of the cone was completely shrouded in kelp.  We noted something below and cleared off the heavy cabbage to discover this hog holding court below. 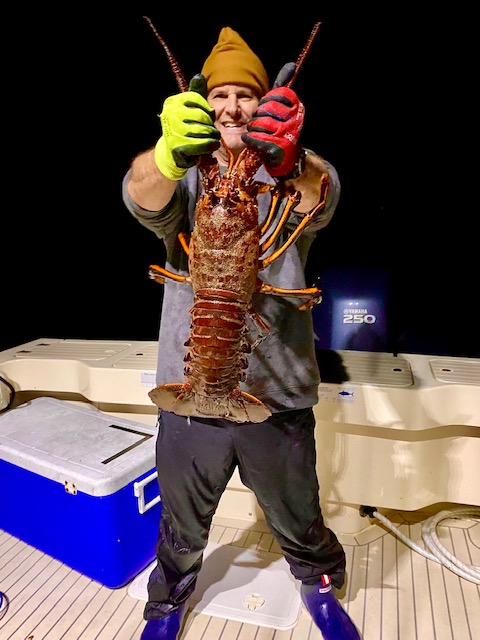 In two consecutive pulls, we had hit what for me were personal best records for both quantity and quality in decades of this pursuit.  After a bit of tribal dancing around the deck, we gathered ourselves back enough to snap this shot of Skipper presenting our prize like Mufasa thrusting Simba up for consecration.

Now we headed out for a second pass knowing that a big crawl was on and we could probably fill our limit while recovering and breaking down our gear for an early end to an evening that had started out so slow.  This gambit is always a risky exercise in hubris, but it seemed warranted in the giddy mood that swept over us as the wind died off and the chop laid down.

The deeps were still pegged and uninhabited when we pulled them in, dumped the bait, removed the lights and began stacking them for transport in the stern.

We got another couple of big ones and then found ourselves in the high clover of throwing back large lobster as we worked through the heavily occupied shallow drops.  We had all the gear packed, stacked and the decks hosed down for running home at 7:50 pm, as we listened to the Clippers begin their defeat of the Lakers.

Although I would have nodded and said "Yeah I know that" if somebody told me our biggest roach weighed 8 pounds, the tale of the scale revealed a different reality as this bug tipped the digital de-liar at 5.96 pounds.  I will be rounding up to six every time I talk about this trip. 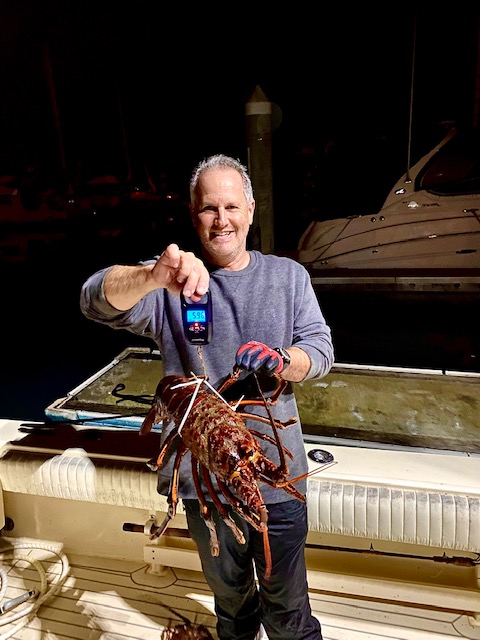 Larry let me take home the big one to show off to my kids.  We all got to take turns posing with our victims before I got medieval on them. 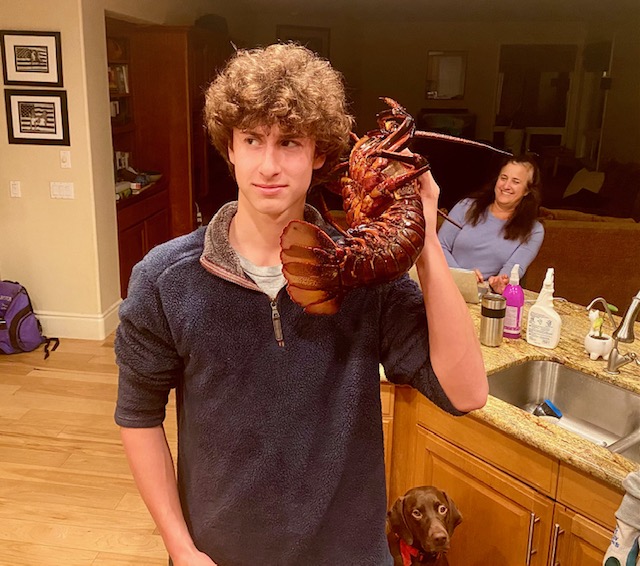 David cracked WendyJo up while channeling Maxwell Smart as he tried to secretly contact PETA to report our cruel harvest on the Live Lobster phone, while a not-so-innocent bird dog lurked near the bottom of the frame.
Since our yard is under construction, the traditional "Lobster Life"  growth chart photo was an indoor job this time. Jen got into the portrait to pull down the lense as Tommy has begun to encroach on David's altitude.  This photo is a clear demonstration of the concept that animals are capable of complex reactions to stimuli.  Although I hate the despicably overused derivative of this term, Dersu is clearly expressing AWE at the sight of this most dominant Lobster. 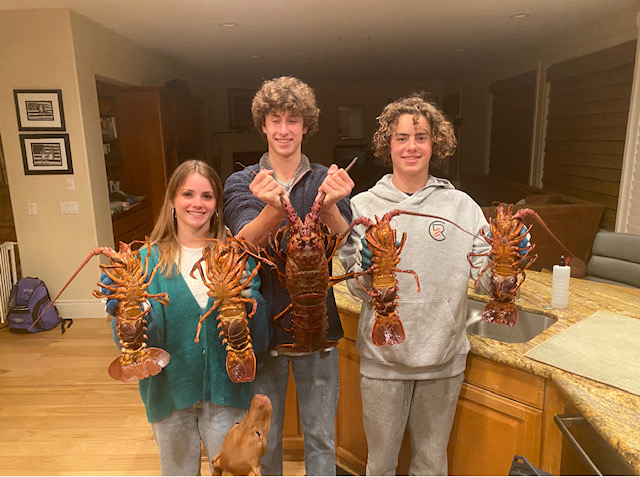 We were able to coax Sarah and Connor up from San Clemente, as well as drag Randy and Suzanne down from Corona Del Mar to help us consume another big kill. 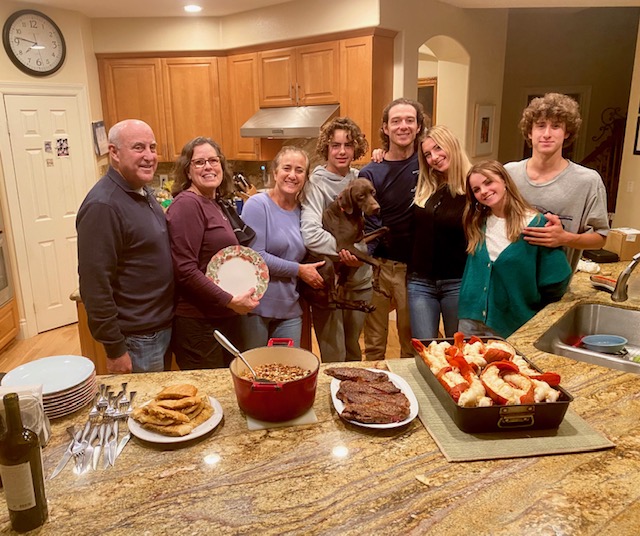 I made all of our guests line up like the Usual Suspects behind the food before I would let anyone eat.  Suzanne did not want anyone getting her plate or cutting her first place in line during the delay. 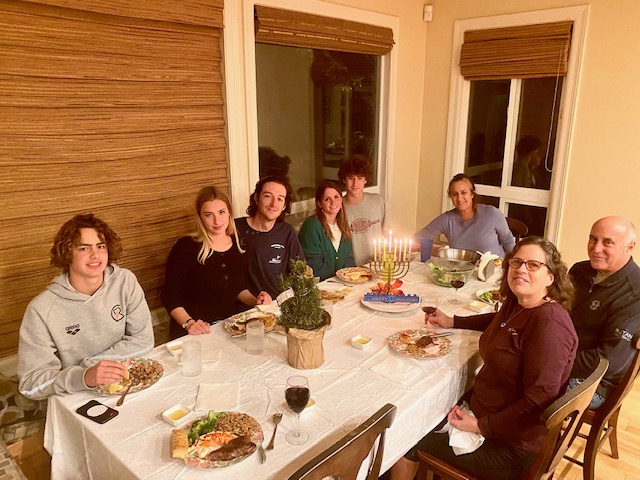 Once again, our One-True God provided abundance to the Chosen as we celebrated Hanukkah with the traditional Hebrew fisherman feast of shellfish and beef.  There was plenty left for lobster omelettes and other lobster-themed consumables for the remainder of the weekend.
We hope that all of you are sharing in the bounty of the fall harvest, as we count our blessings, light the last of the candles to fully stoke the Menorah, and always remain mindful of the fact that

THESE ARE THE DAYS