It's a Wild Northland, Part Two

When I left off, I believe that we were going to go fishing out of Homer on the Artemis again.

On Day two of our campaign in Homer, I joined Nike, Demeter, Dionysus, Diomedes and Sophacles on the Artemis, while Ajax and Hermes went on another boat (we had to split up our group each day because of Covid distancing, which most Alaskans seemed to take seriously).

Our destination was the Barren Islands, which consitute the northernmost chain of the Kodiak Archipelago.  It was close to a 70 mile run in seas that were alternately calm and then roiled into a froth at specific locations where currents rubbed each other the wrong way.  These more remote islands feature a shot at big ling cod, which is the fish I primarily came to Alaska to kill.  They are not cod at all, but rather are the biggest and nastiest of the Greenlings.  They will eat anything they can bite. 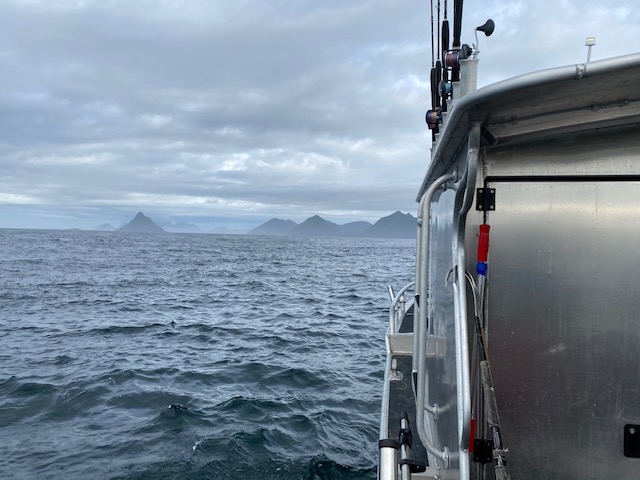 The Halibut fishing started off slowly, but eventually we found the larger grade.  Naturally, Nike caught another biggest one of the day, even as I tried to convince her that my second place flatfish was a contender for that honor.  Everyone got their big one out here and we hit the small halibut spot on the way back.
We also targeted the rockfish, with several of our anglers indicating their desire to get the rare yelloweye, which is a lot like the cow cod that we are no longer allowed to keep in SoCal.  Your narrator, having been made aware that we were fishing an area where we might encounter the big ling I was obsessed with engaging, blew off any pretext of fishing for  rockfish, pelagic or otherwise, and concentrated on relentlessly yo-yoing the biggest jig the crew could provide in my Ahab-like quest for a big ling, which I consider the fiercest of the deepwater fish.  My previous personal best was a 24 pounder caught during the Nixon administration at the Farnsworth Bank, which is now another MLPA-prohibited spot in California waters. 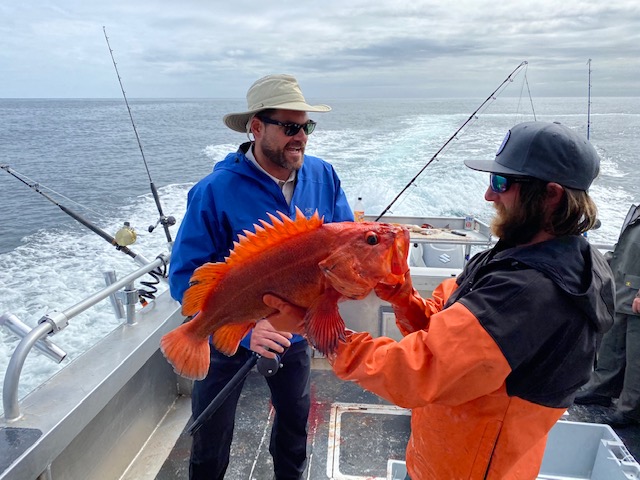 Diomedes cranked up a pretty yelloweye, which gave others hope.  As it turned out, the only other yelloweye anyone would catch was his second one.  It was twice as big and had to be released because he kept the one in the photo.  Fish are counted individually, so there is no sharing or trading for purposes of managing limits to maximize take. 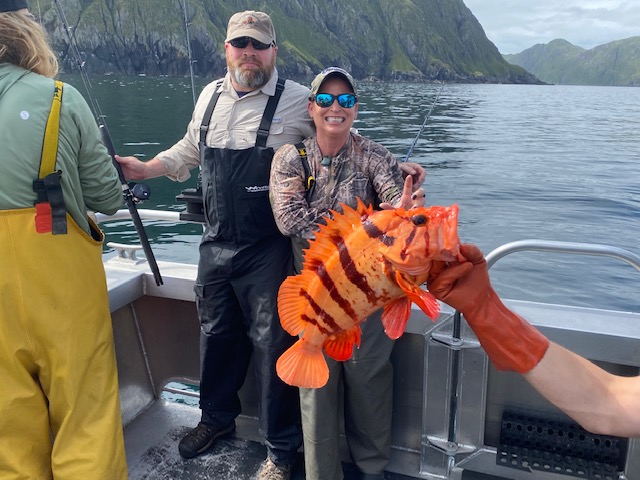 Nike got a beautiful little tiger rockfish.  My companions also caught Quillbacks, which are another of the "pretty"  non-pelagic rockfish that come over the rail as a complete limit in that category.
Demeter and Diomedes each caught big lings, which have to be 35 inches to qualify up here, as opposed to the 22 inch qualifying length in California.  I was jealous, but refused to trade out my giant exculsionary leadhead jig that I was employing like a harpoon intended only for Moby Dick.  I got several nice lings that did not qualify until I finally hooked the one I knew was what I came for.  I did not allow him to get his dick in the dirt and cranked him up steadily like I would die if it got off.  I was mighty stoked when David sank the gaff and took him over the rail.  It was over four feet long and was the absolute highlight of my trip. 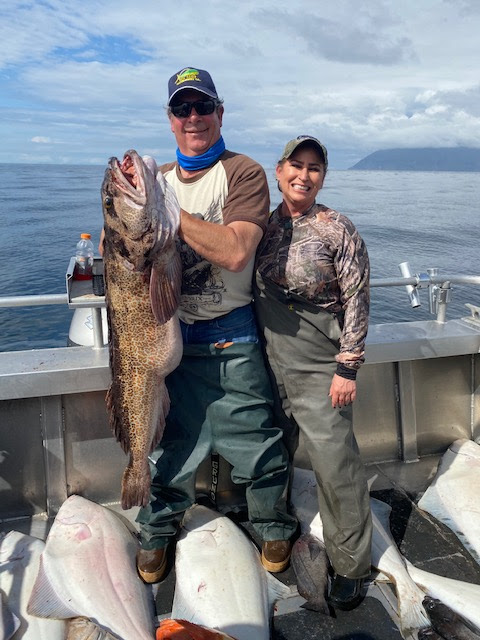 Nike, who was really rooting for me to fulfill this obsession, was nearly as happy as I was overtaxed to hoist this gator up without popping a hernia.Once again, our crew lined up the catch for us as this day was even better than the day before. 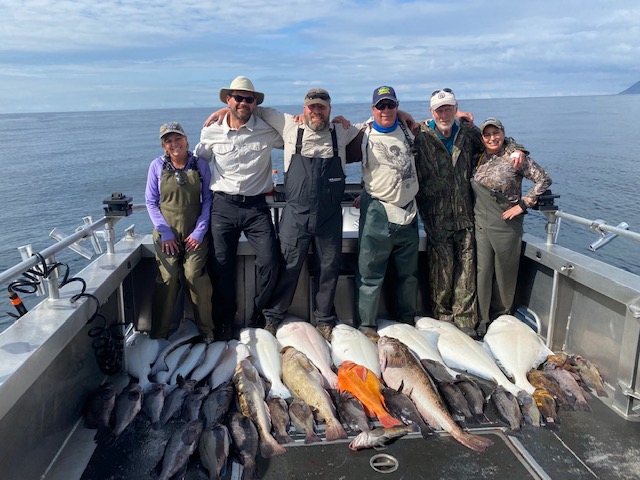 On Sunday, the others went on a fly-in trip to get close to grizzly bears while I opted to fish the Kasilof River with guide named Grant, who owns the Fly Box in Anchor Point.  I was targeting trout and Dolly Varden for catch and release fishing. 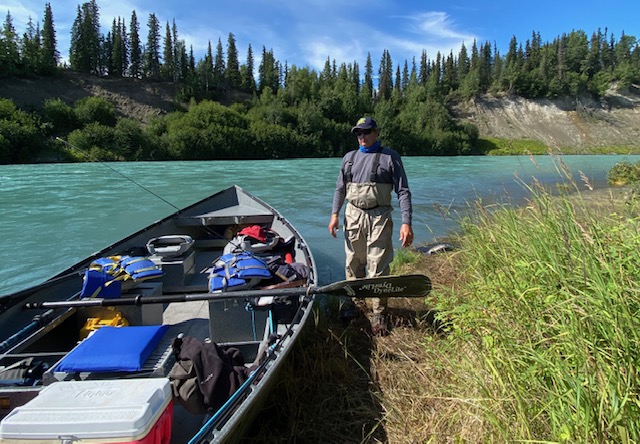 We had the river virtually to ourselves.  We started off flossing for sockeye.  Naturally, since that was not the focus of my trip, I had no trouble catching a limit, which Grant immmediately cleaned in accordance with the rules of the river. 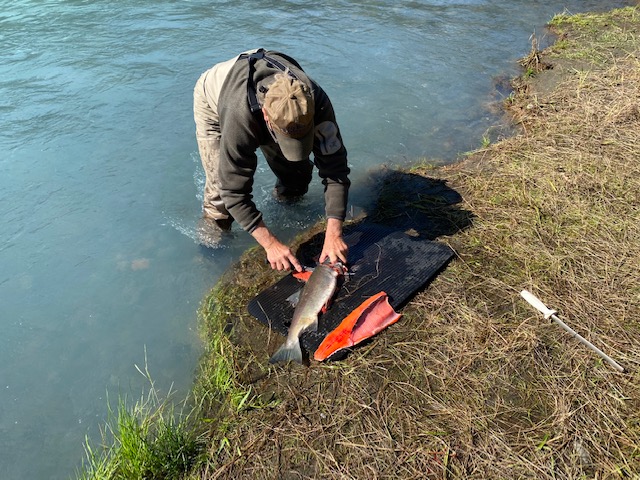 I caught and released numerous trout and was able to cross Dolly Varden off my list of fish to catch.  We stayed on the river until 8 pm. 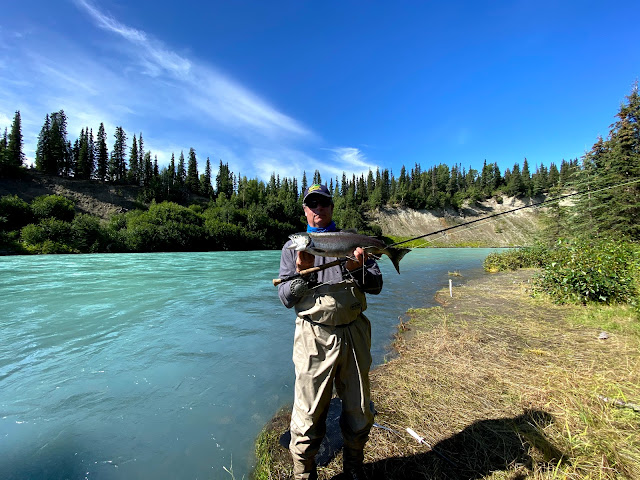 On Monday, we were set to go out with O'Fishial charters out of Homer one more time.  On this occasion, the weather which had been so kind to us reared up and blew a gale outside, causing all of the boats to cancel.  We had plenty of fish already, so we spent the day blasting around the Spit, shopping for souvenirs and grabbing cocktails at the famous Salty Dawg Saloon, which is a must for kooks like us.  Below, Dionysus and Diomedes prepare to pick a fight with strangers. 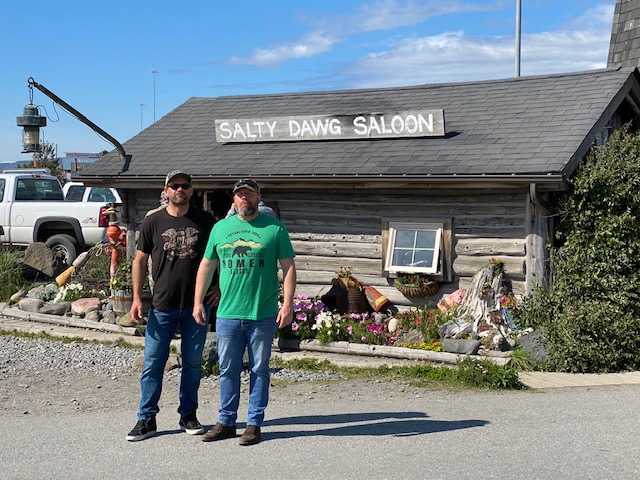 We spent the last day picking and packing up our fish to head out.  That was harder work than it sounds.  Nike and Demeter struck a pose with our haul before the trek back to Anchorage. 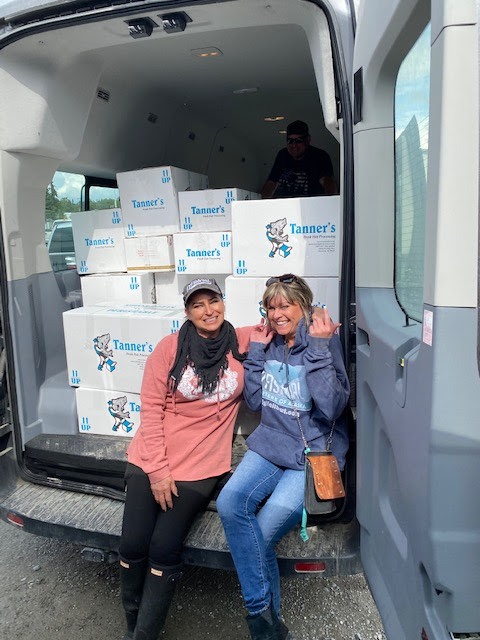 If I make the chance, I am coming back here, because it is big country, with big fish, cool people, and... 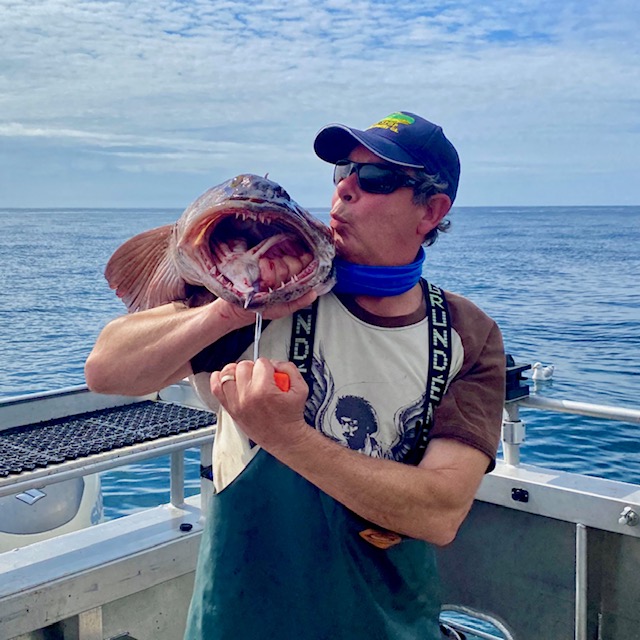