It's a Wild Northland, Part One

Sorry for the lack of posting, but I have not been out that much during these strange times.

I was recently afforded the opportunity to horn in on the second half of longstanding vacation plans of a group of veteran Alaska anglers, who coached me through the process  of getting Covid tested and receiving results in 72 hours in order to gain access to this state of grace. Then they schooled me on their finely honed program for fishing and fun.

We all had to take and obtain negative Covid tests within 72 hours of landing so as to present our test results at the airport.  We used Vault Health's Zoom  monitored saliva test and it worked great.  This demonstrates that rapid testing and results are quite achievable and will become more affordable.

We had one supreme commander on this outing of  Sacramento-based Greek expats.  Nike Wuhu is a legendary anglerwoman from Sacramento who was kind enough to find a place for me midway on the latest installment of an adventure she has been leading and repeating for more than a decade.

I arrived in the evening at a cabin on Loon Lake near Soldatna to meet the other seven people for their last day (and my only day) with the sockeye salmon on the Kenai River the following morning at 3 am. 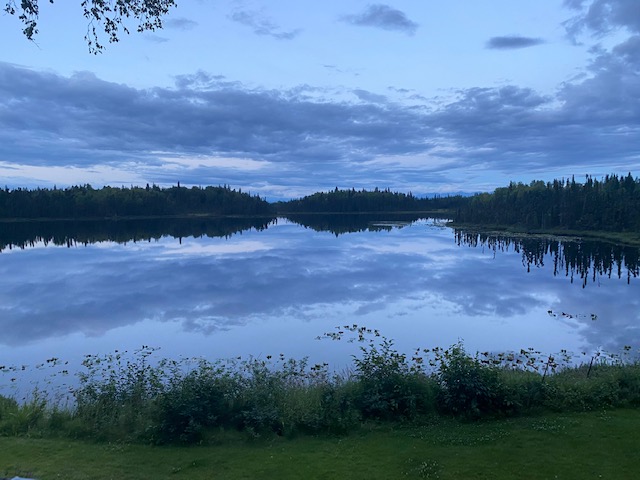 Our crew included Nike and her husband Ajax;  Dionysus Cottonwood; Diomedes Johnson; Hermes the Traveler; Sophocles the Defender and Demeter Basset.  They all knew way more about Alaska than I did and had been fishing for sockeyes most of a week when I showed up.

After a night of intoxication on the shores of the lake, we left at 4 am the next morning for the Kenai. We split up into drift boat teams to floss for sockeye salmon, which are the lifeblood of the Alaskan ecosystem.  This method of angling is one I had never tried.  It involves using heavy fly gear and essentially drawing a sinkered leader with a bare hook on it across the current and randomly encountering the open mouth of a salmon, like a horsebit, since they are not feeding and are only in the river to spawn. If you and the fish react appropriately, the hook will lodge into the outside of the salmon's mouth and then it is game on. I could not see the fish and was instructed to strike fiercely at any abnormality as I pulled these relatively short casts back to shore repeatedly.  The other members of my group had the technique down, but I had to go through a bit of a learning curve and hooksets on rocks and lumber before recognizing the proper sensation of a fish.

We all caught dozens of big pink salmon, which were released.  I did manage to catch a silver salmon which was a personal best for me.  Since this is my report, that is the fish I am electing to display.  Note the safety glasses anglers are required to wear because of the flying hooks and nonstop casting. 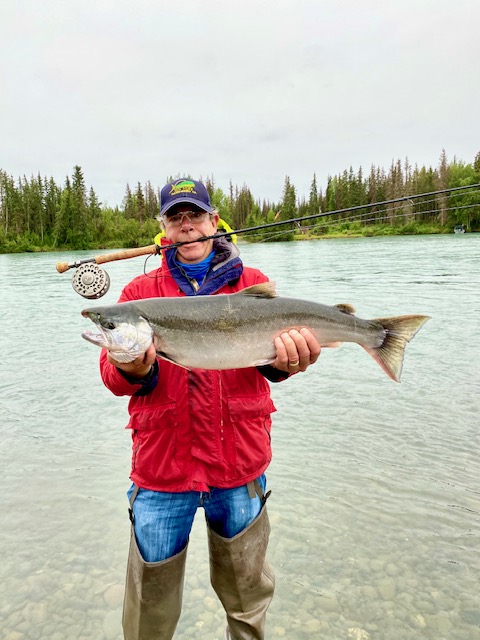 Despite catching numerous pinks, I caught none of the targeted sockeye, so this was the only salmon I killed that day, which was the last day of group river fishing before heading down the Kenai penninsula for the salt water action of Homer.

Our destination was the Raven House, located a few miles from Homer.  With our leader Nike taking a much needed nap, we drove to the Raven house displayed on our GPS.  Who knew that in this remote part of the world, there are two Raven House vacation rentals within a couple of miles of each other?  After checking out the wrong one (which includes Yurts), we all took a series of dirt roads to arrive at a house which had a spectacular view of the Cook Inlet. 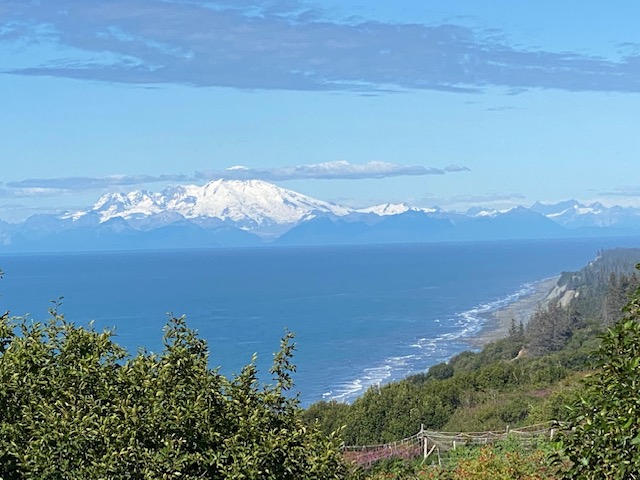 Due in part to the fact that night time does not come around until morning, we awoke with moderately fuzzy mouths for our first day on the ocean with O'Fishial Charters.  I was with the  early morning crew that included Nike, Ajax, Hermes, Sophacles and Demeter.  Our boat was named Artemis and was ably crewed by skipper David, who happens to be a master free diver, as well as the dreamy object of our lady anglers' attention. 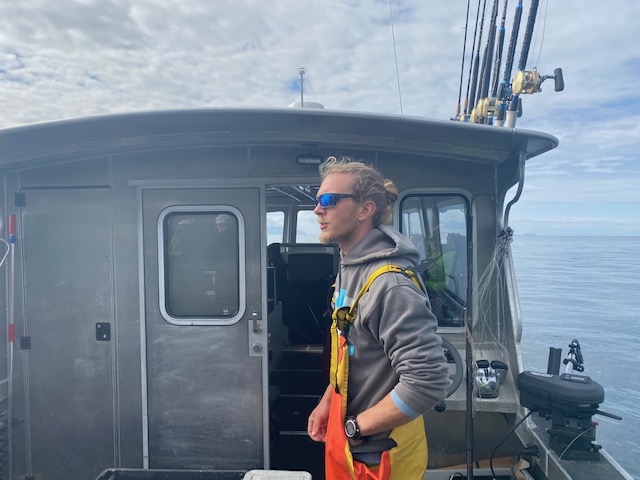 He was ably assisted by his deckhand Tyler, captured below in the act of cutting herring  for the chum bag with an ice chopper.  Both members of the crew had pretty subtle senses of humor.   Good jokes are more important when the fishing is not so good, but I believe I got the jokes anyway. 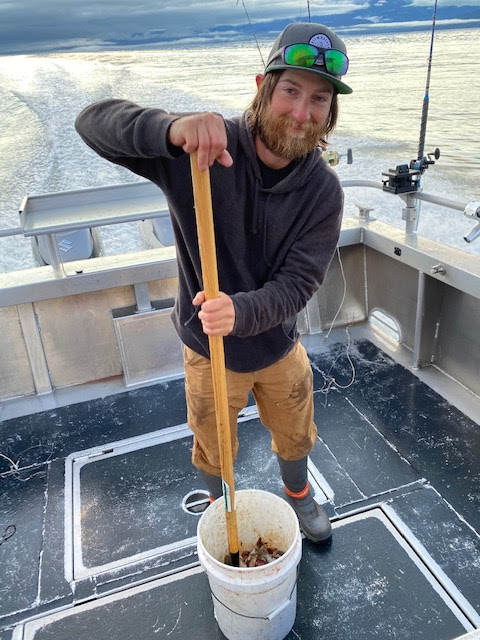 The boat is a roomy aluminum commercial cruiser with a huge cockpit, large fishwells, and twin 350 duo prop outboards that push it in excess of 30 knots.

The ride out through the port of Homer is quite picturesque. I took a bunch of shots, but made room for this one. 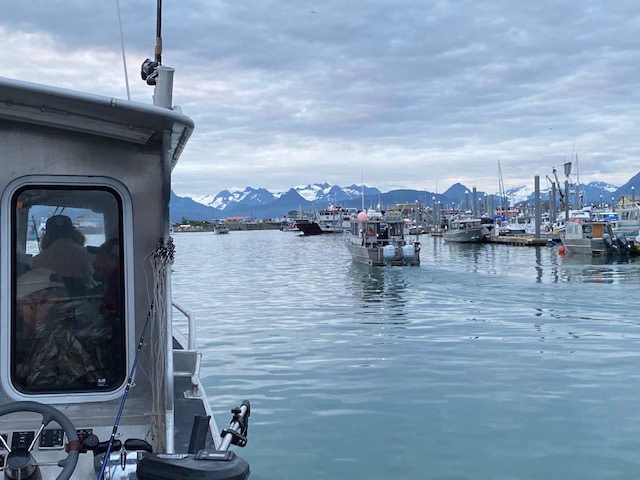 The big halibut we were targeting were not right out front.  We took a long run  out of the Cook Inlet and along the Alaskan Marine Highway to start fishing Elizabeth and Perl islands in the Chugach Passage. I got a shot of Nike and Demeter in the corner near the island. 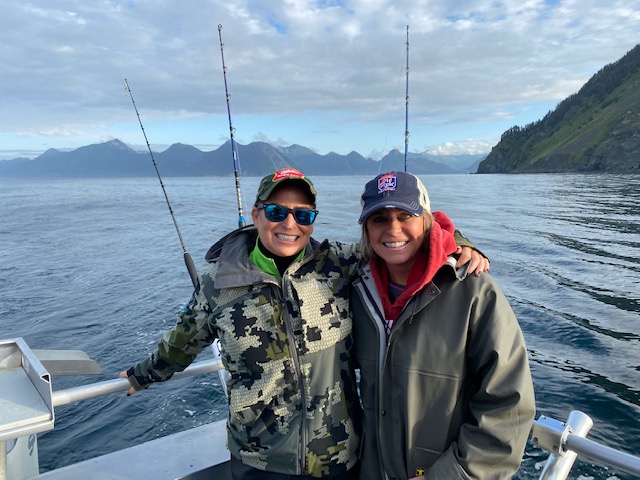 We started fishing for Pacific Halibut (not to be confused with the smaller California halibut we have down here).  Each angler is allowed two fish - one over 32 inches and one under 32 inches, so there is a bit of strategy as to when to keep your big fish, as opposed to releasing it in the hope of  lifting something larger.  Once you commit to a big one, you are done fishing for them.  The smaller ones (males) are seemingly automatic and could be found in tremendous abundance at a separate location where females seemed absent, like my keg parties in college.  They use circle hooks and generally let the fish "load up" the rod in a rod holder before cranking down on and steadily winching them to the surface with Shimano Tiagra reels spooled up with Spectra line.  The halibut nominated for keeping are bled while still on the gaff and then deposited into a saltwater halibut hold without letting them rest flat on the deck, as that can result in berserko flopping and injury to bystanders. 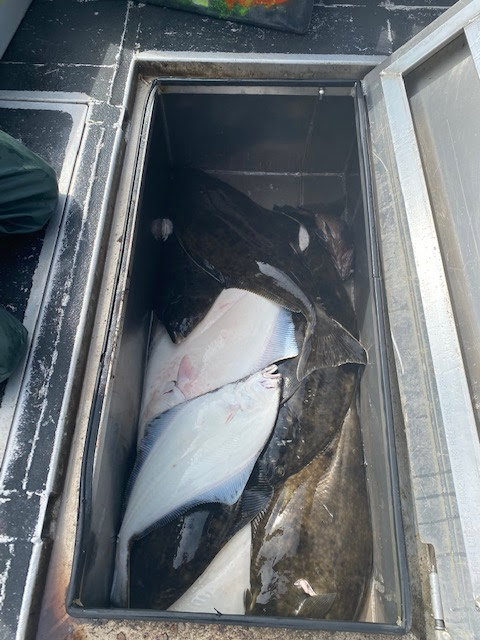 We also fished for rockfish.  Each angler is allowed 5 rockfish, one of which can be "non-pelagic", which essentially translates into a colorful resident fish.  Once you catch one of these, you are done, even if the next one is twice the size of the only other fish you have.  The fish on the left is a "non-pelagic" China rockfish, while the others are the more common Black Rockfish.  All are delicious and similar to the "rock cod" we catch in southern waters. 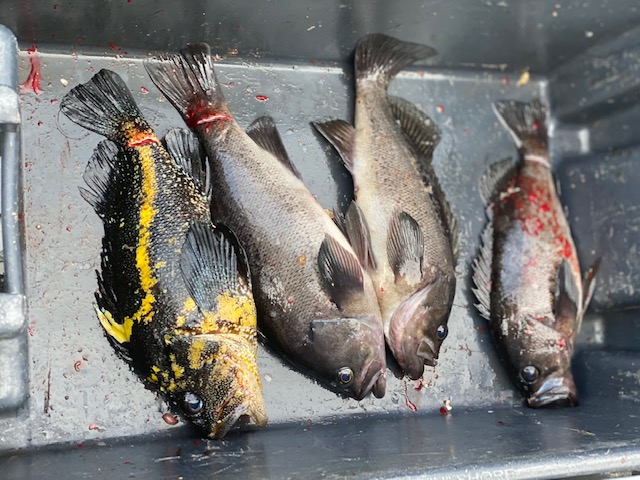 Nike got to work on the halibut, landing what turned out to be the largest one of the day. I bounced a leadhead jig as a more active method of fishing.  After sorting through 9 of the biggest halibut I have ever caught, including nervously throwing back an early 40 pounder because I wanted to keep fishing, I eventually landed a personal best that was a fraction of an inch shorter than Nike's.  Just to be contrary to the standard whiteside-out photographic tradition, I displayed the eye-side out in front of Hermes and Sophacles, who had much earlier settled their deal with the big fish and were engaged in celebratory consumption. 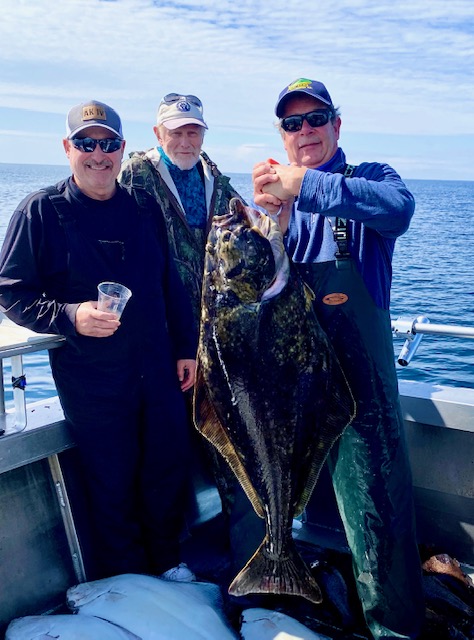 The crew did a great job of cutting our catch after a painstakiing effort to take a good picture of the lucky anglers and their carnage. Left to right - Ajax, Nike, Demeter, your narrator, Hermes and Sophacles. 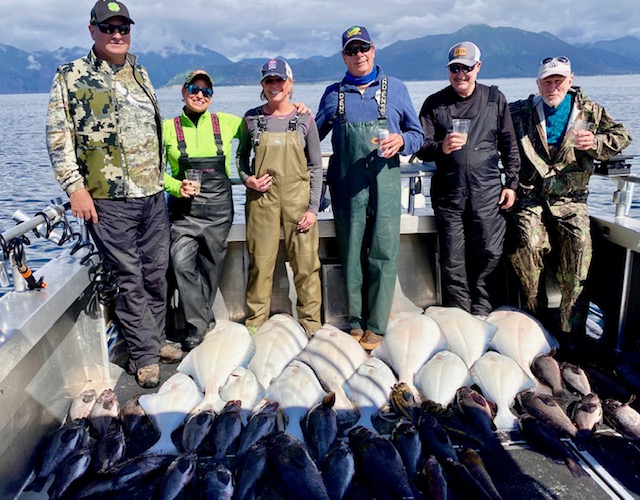 We rolled back into Homer and spent more time on the Spit, which has an eclectic and colorful collection of shops and restaurants.  I must say that I really love this town and intend to get back here with my predator children before long, as opposed to just saying maybe someday.  We will see. 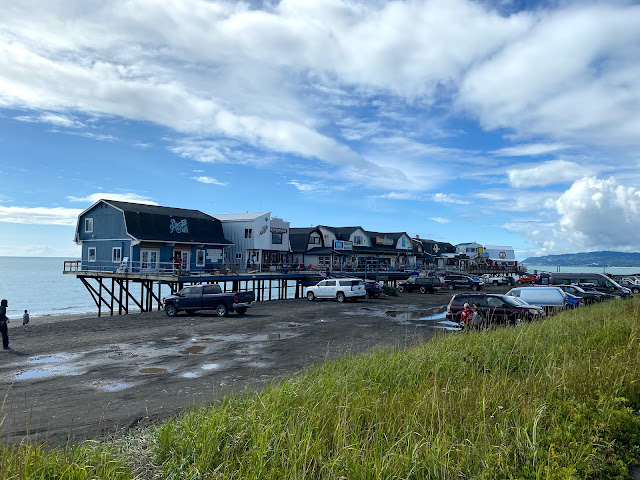 Although the tides were not extreme during our stay, Homer has some of the most dramatic tide swings of any location in the world, which makes for some beautiful beach combing. 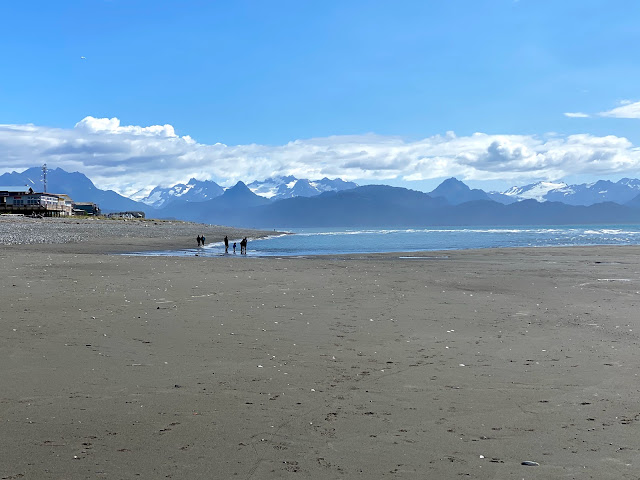 Due to the amount of photos and my aversion to brevity, the spacial limitation of my blog condemns me to terminate this narrative and call it Part One, so you know what is happening here.
See you in the next chapter, because... 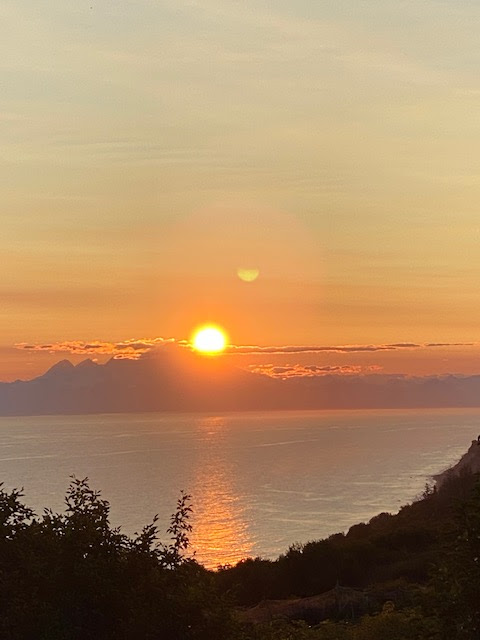