Mint Green Magic When the Navy Sings the Blues

As Commander Cody might have said in “Hot-Rod Lincoln - Went out of San Pedro late last night - with Secret Skipper and Big Dave, just after the clock turned Thursday.  Up until Go-time, we were uncertain as to whether we would be going to fish White Seabass at I Will kill You If You Tell Canyon at Catalina or make the longer run down to the Desperation area of Roberto Clemente Island for a shot at a mixed bag of bluefin and yellowtail, with a puncher’s chance at one of the bigs.
We opted to swing for the fences and made the nocturnal voyage toward the island that we almost share with Mexico and sometimes share with the US Navy.
We had a mixed bag of sardines and mackerel as we ran across really massive bait clouds outside the corner on the approach to Pyramid.  We got outside the lee of the island in the gray and found somewhat cranky water at Desperation.  Our plan was to look around and then head in toward China to anchor up in yellowtail country.  We had credible dope that the bluefin might join in the fun at that location.
The Thunderbird set up east of us.  We started chumming in ones and twos.  Secret skipper got picked up on a fly-lined  ‘dine and it was game on.  He brought the fish into Big Dave’s head gaff   as the sun started to break the horizon.  It was a great start and a decent fish between 15 and 20 pounds.
While Skipper was on, we saw bluefin start to blow up on bait about 600 yards to the east under a gathering of pinwheeling terns.  The spouts of mist created by their collisions with the surface started marching towards us in incremental eruptions.  I changed out my gear to the heavy stuff and got a big mackerel into the current that was headed in the right direction.  Larry’s fish hit the deck and we prepared for bigger game.
When all was in place and the fish were about 250 yards away, a Sea Stallion helicopter  suddenly thumped  up and over the crest of the island behind us, like in the Gary Owen scene from “We Were Soldiers.”  We knew they were not coming to save us.
Ours was the first boat over which they hovered.  I looked up and waved, hoping they would just cheerfully wave back and mosey on.  This was not the case.  Instead, the helmeted spokesperson forcefully and repeatedly pointed toward Mexico, clearly advising us to clear out.
“But we are Dreamers and we don’t want to go to Mexico”,  We shouted back, knowing that our pleas to remain would be drowned out by the numbing throb of those huge rotors whipping up the sea around us.
As he left to deliver the same news to everyone else in the general area (including those out on Desperation), the copter dipped and the  rotor blast put us in a whirl of mist that blew Secret Skipper’s lucky hat right off his head and into an oblivion from which we were unable to retrieve it.
“Well, you are wet Dreamers now!” was what I thought I heard him say over the deafening pulse as he headed off to spread the bad news to other anglers.
We dutifully stopped what we were doing and headed back up the front side as the rest of the fleet got the news in seriatum and sullenly fell in behind us.  We watched as two of the sport boats tried to tuck into the corner area where we had seen big bait marks and birds gathering, but the copter reappeared to harry them off that mark and drive them in our direction.
We ultimately set up at Lizard rock in a promising zone and began to flyline baits towards the beach.  It was an instant bite on both big Calicos and 10 to 15 pound yellows that joined in the mix.  The seals cruised in on our party, but did little damage to our efforts.  They ultimately moved toward the sport boats that set up a short but critical distance to the west of us near Purse seine.
After we put 10 yellowtails in the box, we started releasing fish that your reporter probably would have been happy to throw on the ice on a leaner day.  I felt liberated enough to start throwing  a mint green surface Iron (my favorite way to fish) and was rewarded with a mix of Old School San Clemente sized calicos and  several more yellows,  at one point going ten for ten on consecutive casts.   Since so many of the fish got a catch and release pass at that point, the fish  already on ice were pissed about that, as they no-doubt felt like the people who actually paid to go to Woodstock before it was declared a free concert.
Secret Skipper got a big tug from something that behaved abnormally and then mutated into a giant wad of kelp.  As he dragged the weeds ever closer against fiercely active resistance, I saw a flash of cream and brown that put my heart into my mouth about the largest calico ever hooked in the history of humanity.  Right about then, it revealed itself to be a loggerhead turtle. It was snagged in the back flipper.  Big Dave figured he could just grab it and put it on the deck where it would serenely allow us to operate, but it proved to be a much heavier and feistier animal than what we had envisioned. 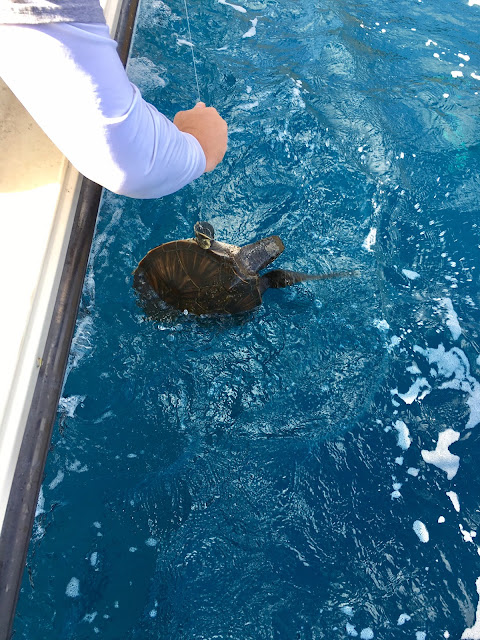 It stayed in the water while we freed it up and both crew and quarry were equally relieved when it swam back into its aquarium of origin.
By 12:30, Big Dave and Skipper were  ready to leave, although your narrator could have stayed there and thrown that wintergreen candy bar until Hell froze over.  Reason prevailed and we headed back into a choppy swell toward San Pedro.
We are having a hamachi and calico bass feast for our cronies tonight.  I had mostly refrained from keeping calicos over the past 15 years or so, out of respect for a fish I love and in deference to   one of the Credos of political correctness within the angling community.  My kids, who have grown up in this regime, recently asked me why we always threw them back if they tasted as good as I claimed, so we kept a few and had a fish fry.  It was a huge hit and my Jewish offspring suggested we could modify our longstanding practice, so I could go back to being more Catholic about Calico Fridays, like I will be doing tonight.
So anyway, I kept this limit and probably will not apologize for it, as they are quite tasty and I have several good recipes that have mostly been mothballed for nearly a generation.
The mint green jig is continuing to beckon and kid-catchable sized yellowfin have just moved up in force, so I think there is still some gas in this season’s tank.  Perhaps the best is yet to come, but gentle readers, you all know by now what’s coming next in this narrative. 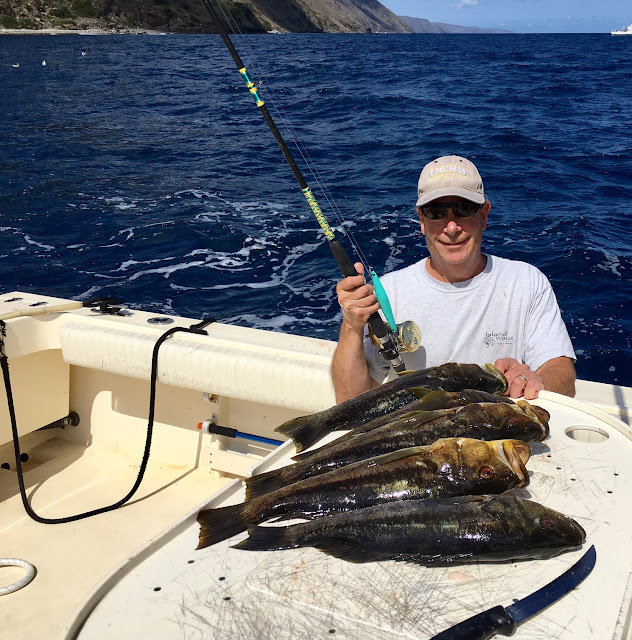