Dodo’s and Big Yellows at the 43

Since my boat has been out of action this season, Secret Skipper invited me to skip work and take my two boys, Tommy and David, out to paddy hop for dorado and yellowtail on Wednesday, August 16.   We heard reports of tuna on the backside of Clemente and at the Tanner, but we decided to take a path from the slide at the east end of Catalina down along the ridge.
We packed our gear, made our sandwiches the night before and drove up to Cabrillo Marina from San Juan at 3:20 am.  We were headed out to the 152/277 zone with two scoops of good sardines from the San Pedro Bait company by 5 am.
The boys were wearing their lucky souvenir Jigstop T-shirts in honor of the closing of our favorite tackle store and iconic repository for my disposable income for the past 35 years
We encountered choppy 68 degree water in the gray light on the way past Catalina.  We put out the trollers and stopped on a couple of dry paddies at the 277, where we marked pretty good volume on the bait and metered some uncertain marks.
The sky remained mostly overcast as the water gradually warmed up as we worked our way toward the 181.  We saw very few boats, heard limited radio traffic about one blind-strike dorado and mostly negative reports from the 209 and the 267, which we bypassed.
We found 70 degree water and less chop at the 181.   The air remained surprisingly and pleasantly cool. Tommy and Davey got up in the tower to scan for kelp paddies as we metered bait schools 100 feet down.  We saw no porpoise or whales here, or anywhere else the entire day.
We dragged around the 181 and started to chase warmer water out toward the  43 instead of continuing down toward the 182.  We saw more terns and bits of kelp that kept us looking.
In the late morning, your narrator spotted a paddy that had some heft to it.  As we approached, we saw dorado flash through our path.  Secret Skipper swung the boat into a controlled slide upwind of the paddy and we tossed a half dozen sardines over the side.  Dorado immediately swarmed the bait, crashing between us and the paddy.  We pinned bait on our 2/0 ringed hooks and fired some casts toward the  paddy.
Fairly instantly, we were all hooked up in succession.  The fish were all decent sized hens that screamed off our 20# flouro-top-shotted line and slashed a path through the water and into the air in a frenzy of acrobatic action. 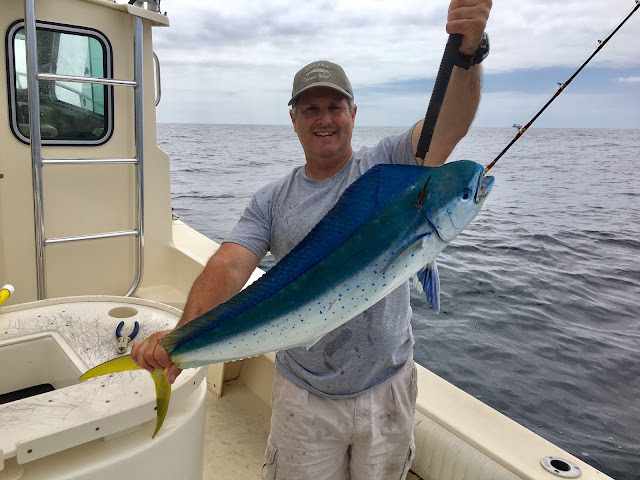 Skipper pumped up a shocking blue dodo, while your narrator bagged one that was flashing gold when introduced to the gaff. 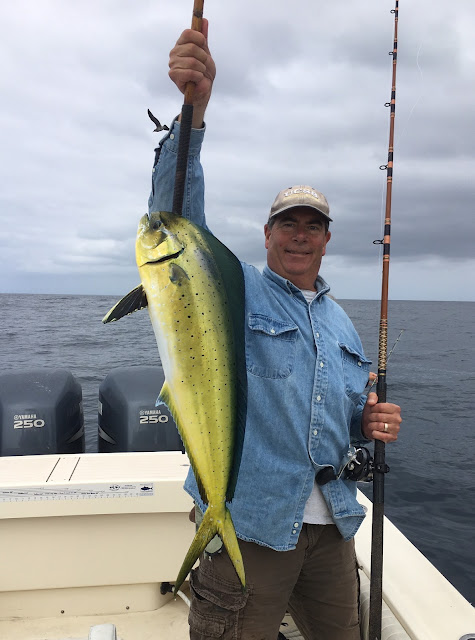 Tommy hung one on an Okuma Cedros spinner that was more than a match for a fish that jumped and somersaulted many times in the corner between downward runs when it felt itself drawn too close to the boat. 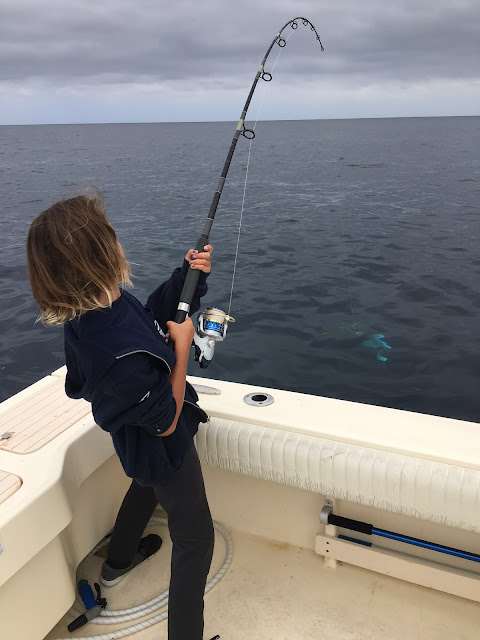 In my excitement to re-tie Tommy’s rig and get it back out, I expertly cast a lively sardine over the outrigger pole and into the water twenty yards from the side of the boat.
Before I could make a really solid effort to sweep my line off that limb, my bait got picked up and line began flying off the reel and over the rigger pole as the fish sounded.  David went up into the tower like a monkey and I passed him the rod with the line still peeling off.  David got the line off the pole and passed it down.  When he came off the ladder I handed him the loaded stick, since he had rescued the rig after I hooked a fish in an impossibly stupid way.  No matter how many mistakes we made, these fish just wanted to be with us. 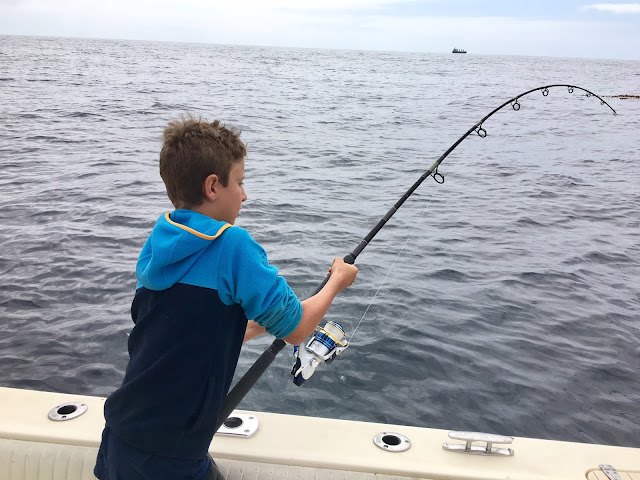 David worked it up the rail, stayed determined and after a while the fish was in the box with the others before we motored back toward our paddy, which was now teaming with wheeling terns that screeched out encouragement for us to throw bait, which we did.

In less than forty minutes we managed to boat all six dorado we hooked and everyone was on the board.

David found himself locked into a bigger model that screamed off line and headed deep like a yellowtail, because it was. 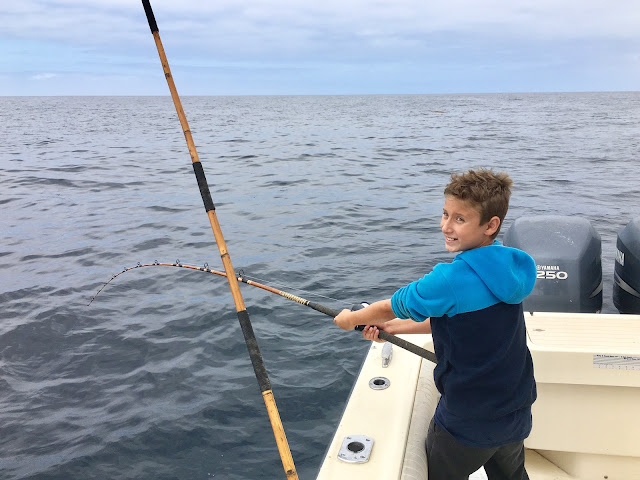 David leaned into the arcing venerable Calstar as Secret Skipper stayed close, sensing that this was a big fish. 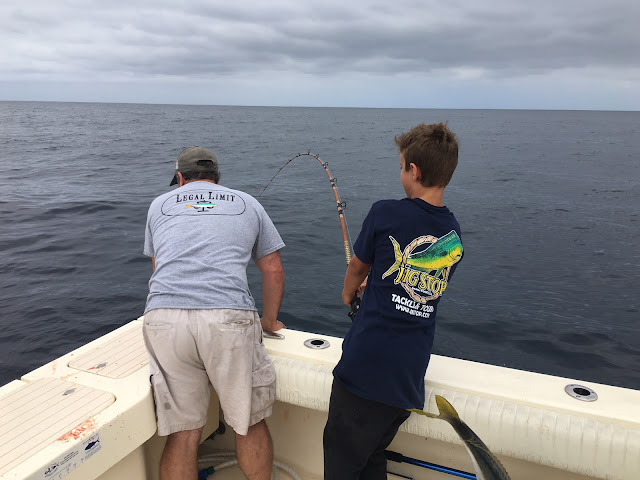 David’s fish took him all over the boat as he traded advantages with a fish that seemed to know where the props were.
Eventually, David outlasted the beast, which laid out perfectly for a gaff shot. 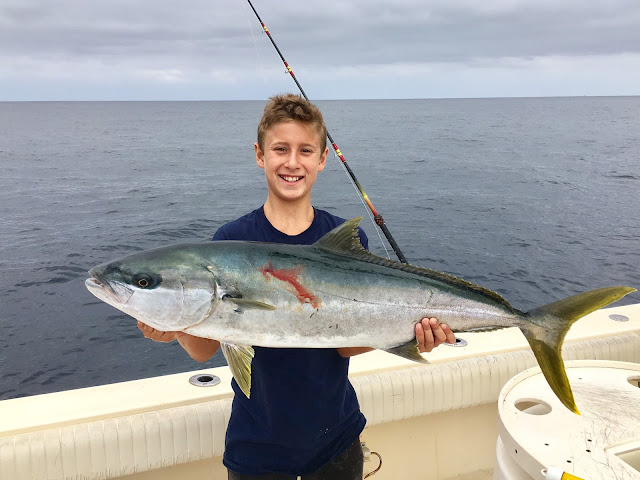 It was a personal best for David and we were mighty stoked.

Skipper hooked up again and pumped another respectable yellow to the rail, where I got the chance to play Queequeg with the gaff. 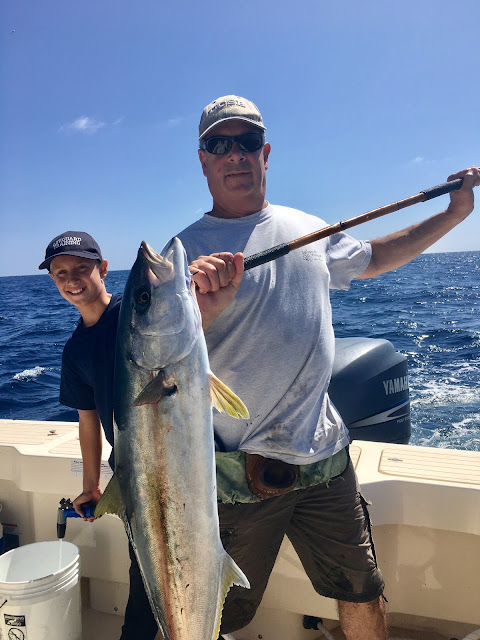 As we got about 100 yards downstream of the kelp, the water erupted in a huge splash as a giant fish breached and flopped onto the paddy.
What was that?!  We all agreed it had a giant head and looked to be at least four feet long.  I came out of the water a couple more times in the immediate orbit of the kelp and seemed to shut down the bite.  We speculated as to what it could be, deciding that it was an enormous cannibal dorado that was eating the other fish and didn’t want our bait.  We motored up to the magic kelp and discovered it was a 300 pound mola trying to shake off parasites by flopping onto the kelp.  So much for our sea monster.
We put out the trollers and continued to head out toward the 43 as the water warmed and the wind began to freshen up.
David sang out from his perch that he saw a good paddy with birds above.  As we motored closer, we saw not only birds in the air, but also observed several standing on the paddy, which is always an occasion for increased hope.
We pulled in the trollers and started to sneak up on this car-sized cabbage.  There was little need for that, as several dozen good-sized yellowtail came charging out to greet us.
We began chumming and both Skipper and I hooked up yellows that we dispatched with surprising ease, owing perhaps to their disappointing size, which permitted us to bounce them onto the deck and get them in the bleed buckets.  Tommy went out with the spinner, which had a top shot that was now down to about 11 inches of fluoro.
Skipper noted that the line was peeling off Tommy’s reel like it was attached to a passing train, while Tommy’s gaze was focused elsewhere.

“Hey Tommy, you might want to take a look at your reel and turn the handle before all of your line disappears.”

Tommy looked down and engaged the bail.  The rod went down to the rail with authority as the spectra whistled through the guides toward the center of the earth.
Skipper knew right away that this was one of the bigger ones we had seen and took himself out of the action to mentor Tommy through the experience.
After about fifteen minutes of mostly losing ground to the fish, Tommy was pleading for someone else to take over. 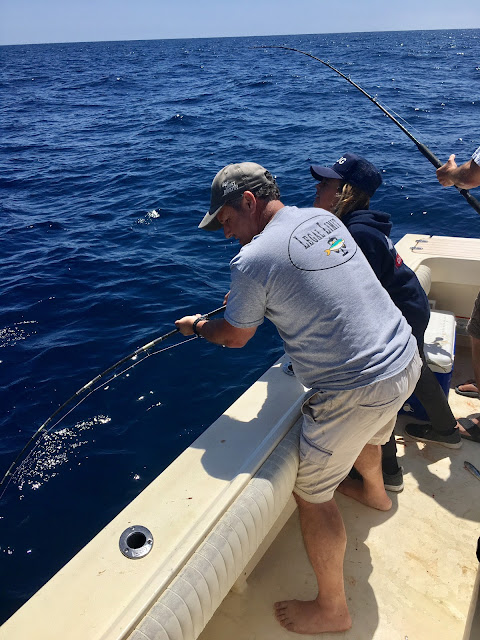 Skipper would have none of it, helping Tommy keep off the rail and coaching him around the deck. 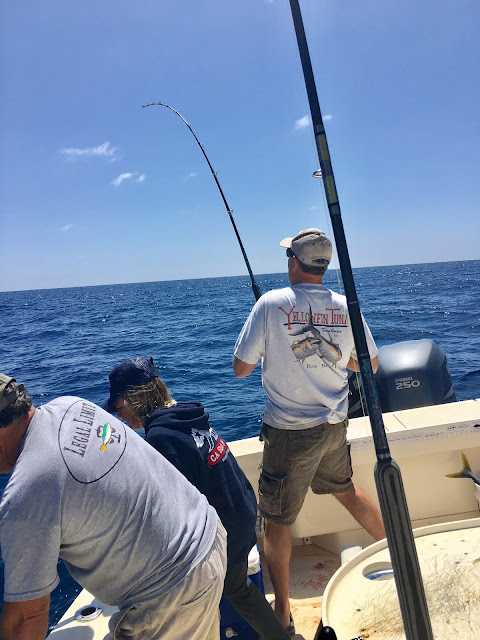 Your narrator also hooked up to one of these more sizeable models, and we were both wired and screaming. It was time to grin and grind. 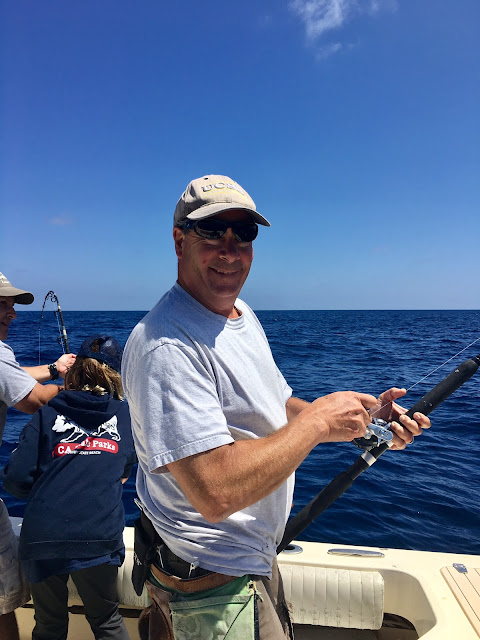 After we got close to the half hour mark, Tommy’s fish showed signs of heartbreak as Tommy gained line with decreasing loss when the fish tried to run.
When it finally spiraled up and laid out for the gaff, Tommy was as close to finished as was the fish.  Skipper sank the gaff and heaved the fish up and over the rail to deposit it on the deck with a heavy thump. It was a personal best for Tommy and a new family record.
Your reporter's fish met the steel a few moments later. 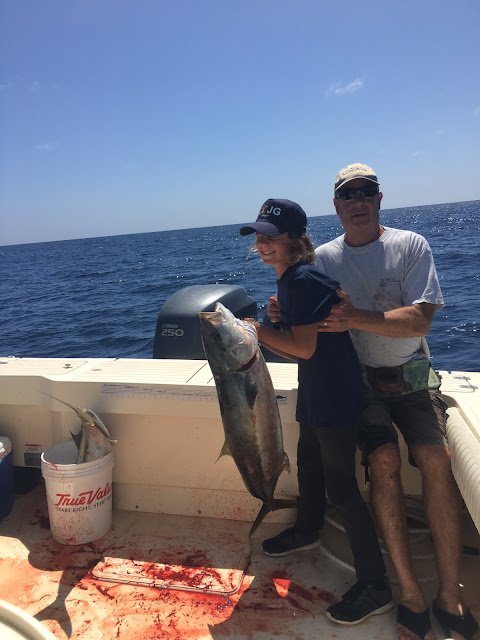 Tommy was too beat to actually lift the fish and retired from further action for a while.

We made a couple more drifts and boated several more sizeable yellows after extremely satisfying battles.  The wind had come up, we were 74 miles from the dock and it was getting late.
We headed into westerly chop that just got worse as we made our way back.  We had to slow way down to deal with the close interval seas and water plumed over the bow and the house.  We decided that our best chance to cut fish would be to roll into the lee of Catalina and find calm water.  We took a ferocious 50 mile beating getting there and found a peaceful spot to recover and begin the wet work around 7 pm.

Before the knives came out, Tommy and David hoisted two of their yellows amidst the carnage. 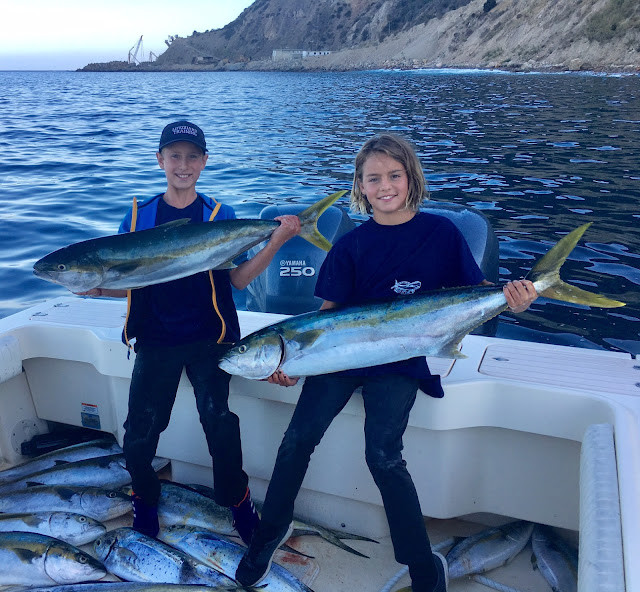 We cut fish for more than an hour with the entire crew helping to process our most terrible kill.  The boat looked like a slaughterhouse when we were done with our butchery and began scrubbing down for the last leg of our journey.  It was dark when the boys went below to hibernate while we made our way across the channel back to Cabrillo Marina.
After cleaning the boat like Zombies trying to snap out of it, we loaded up our vehicles and nodded home.  We picked up more ice just before the market closed at midnight and offloaded in the driveway.
We all knew we were too bloody to just fall into bed.  When I finally hit the shower, the water ran down the drain like the bathroom of the Bates Motel.
We are having a gathering of feeders on Friday, from what was certainly one of the more intensive and rewarding efforts we have had in a season crippled by our boat’s mechanical difficulties, but saved by the expertly delivered generosity of Secret Skipper and his mighty boat.

These fish are showing up with sincerity, so get out there and comb through the kelps to find the magic paddy that delivers.  It may take some effort and a mouthpiece-wearing ride home, but the water is warm, life is short, and 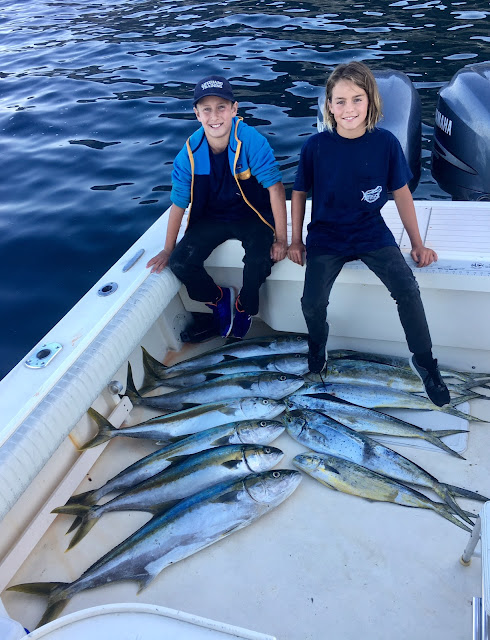