I know that I am in the middle of reporting on our trip north, but I must interrupt that process to publish a report of this weekend's carnage.  Secret Skipper staged what was a virtual reprise of a trip we all took together five years ago at the 43 Fathom Spot. Skipper took Tommy, David and your faithful reporter out in search of dorado on Saturday, September 17.  We had a good plan and it worked.

We were targeting the dorado that had been in such tremendous historical abundance, but also  intended to drag for bluefin on heavy gear if we got the chance away from the clouds of boats certain to be with us.  We  each packed 20 pound rigs with 20# fluro; 30 pound fluro tipped medium bait rods; a couple of 40 pounders and heavy trollers.  This necessitated festooning the rocket launchers to capacity. 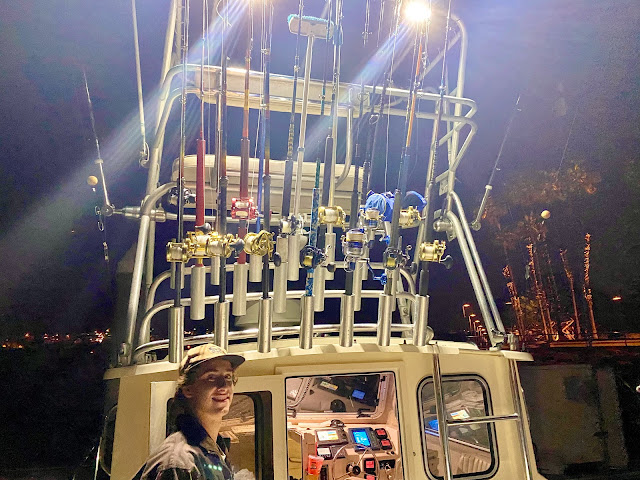 David paused beneath this display of piscatorial firepower spangling back the glare of the deck lights, adding to the Romance of the Sea ambiance that accompanies midnight departures.

We dropped a Benjamin on a couple scoops of medium-sized sardines at the San Pedro Bait barge and were on our way back down towards Dana by 2 am.

Our goal was to roll down to the 279 area before gray light and then fan out from the fleet to find a paddy that was holding mahi.  We anticipated grumpy seas and so made better time with smoother water that allowed us to be on station early and loitering in the darkness at 4 am.

The ride afforded Tommy an opportunity to resume the sleep that was briefly interrupted by having to get out of bed and sleep in the car on the way up the coast to Pedro.  He was able to get right to sleep in the v berth after we got bait and headed into the open sea.

The sky was mostly overcast, with the moon partially visible.  It was T-shirt weather, even at this hour, though the heat-lock that had fevered up the state for weeks had finally broken.

We saw the lights of other boats and expected that a vast fleet would be revealed as darkness began to give way to gray, like the bunker view from Normandy on D-Day.

Instead, by the time we began to perceive the horizon, there were only a couple of boats in sight.  Had we somehow gotten separated from the herd?  Was that a bad thing or a good thing?

The Tomahawk and the Truline were the only boats in our area and they soon left after drifting a few dry paddies, just like we did.

As we mosied away from the only boats in sight, we found many worthy paddies to investigate in the 70 plus degree water.  Tommy and David, armed with binoculars and a walkie-talkie connection to the wheelhouse, were our young-eyed scouts in the tower.

The area we concentrated on was at the margin of the big eastern cloud cover.  After an hour or two of baiting promising spots that did not deliver biters, the boys spotted one that was a floating hotel, complete with standing birds.

We threw bait and fish flashed and jumped.  The boys and I started with our lightest 20 pound rigs and #1 circle hooks to provide the best chance if the fish were choosy.

David got bit, as a dorado screamed of line and was airborne by the time he started to put an arc in the rod. 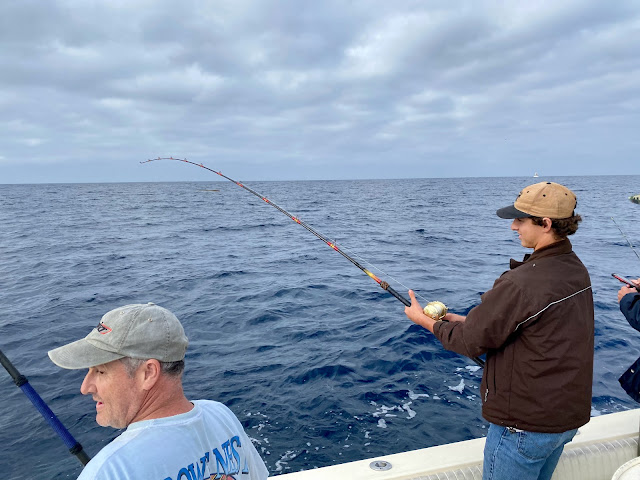 Then your narrator hooked up on a bull that made a huge run as David's mahi jumped near the boat and broke off.

Skipper hooked up and handed off to David so he could gaff my bull dorado as it came to color after a some acrobatics and deep runs that caused me to trade up to my Excalibur Truline and 30 pound line after this stop. 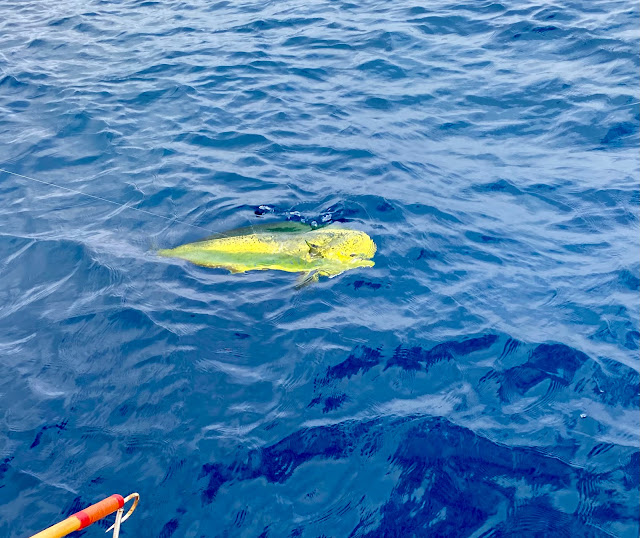 Skipper put your correspondent on the first dead fish with a perfect head shot with the gaff I made for him as David stayed busy with his own fish. 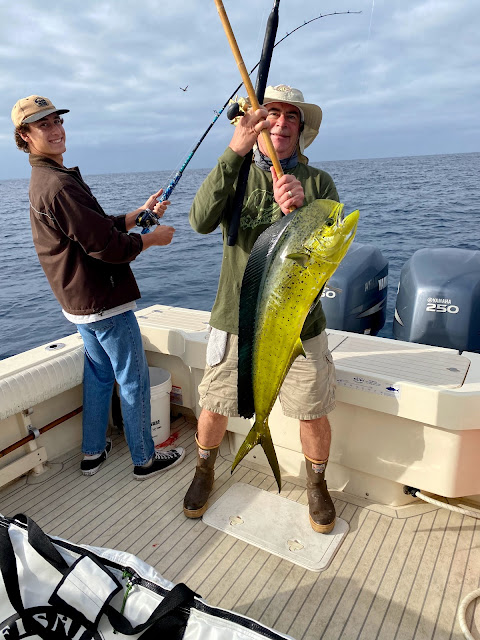 Skipper stayed busy with the gaff as David pumped in his dorado. 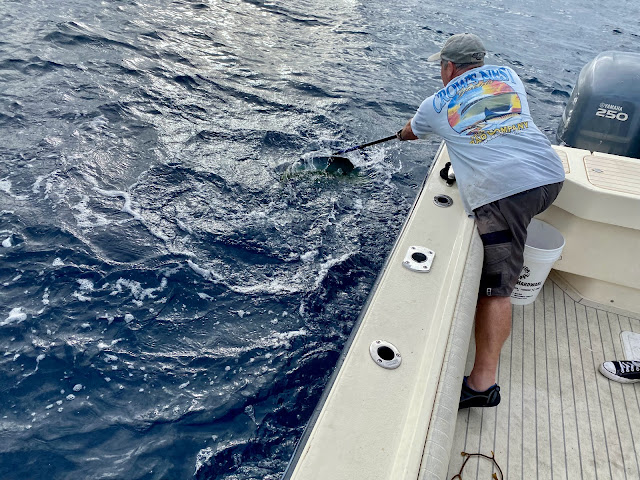 These fish are not easy to hit with the hook as they change direction on a dime at the rail. 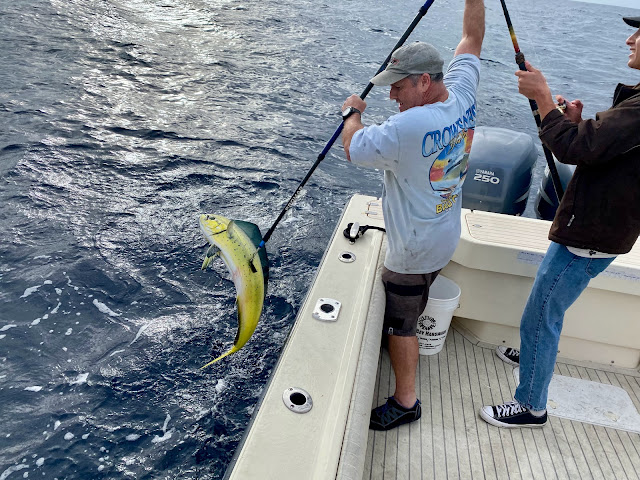 David was on the board with this specimen. 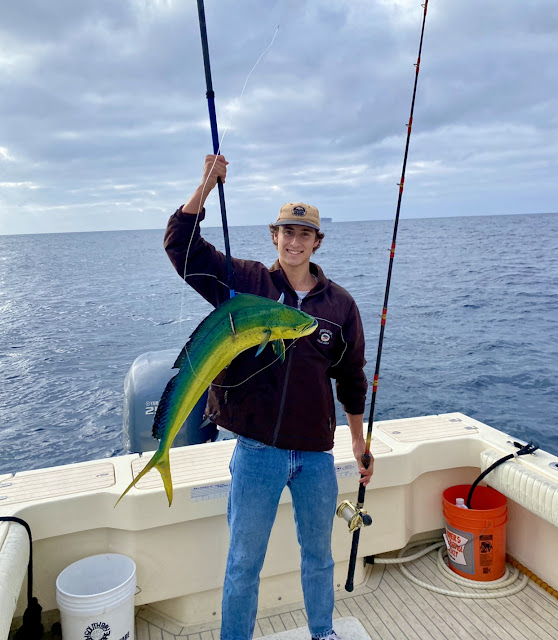 We drifted well off the kelp and Tommy got lit up again. 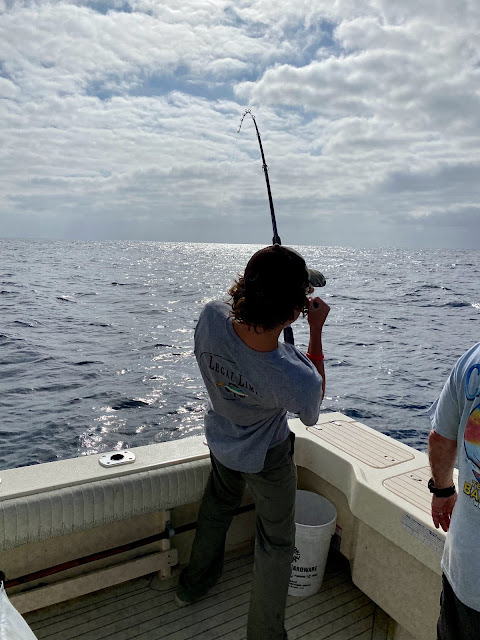 We saw several jumpers and free swimmers around us as they milled about on a pretty elliptical gyre. 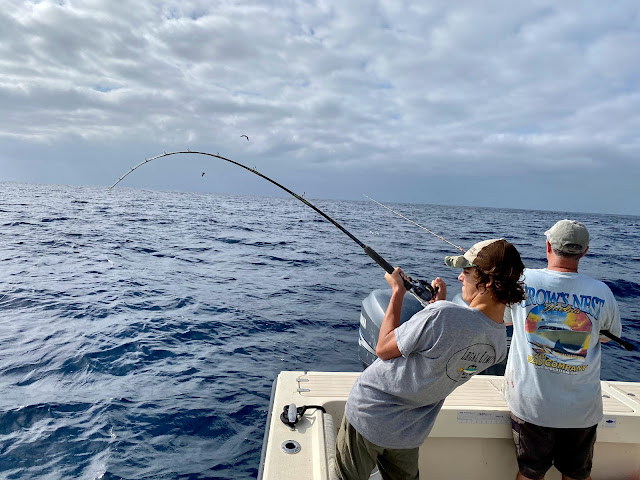 Tommy arched back and took his fish toward the corner. Several of these colorful fish won their freedom with boatside acrobatics and gaff dodging maneuvers, but not this one. 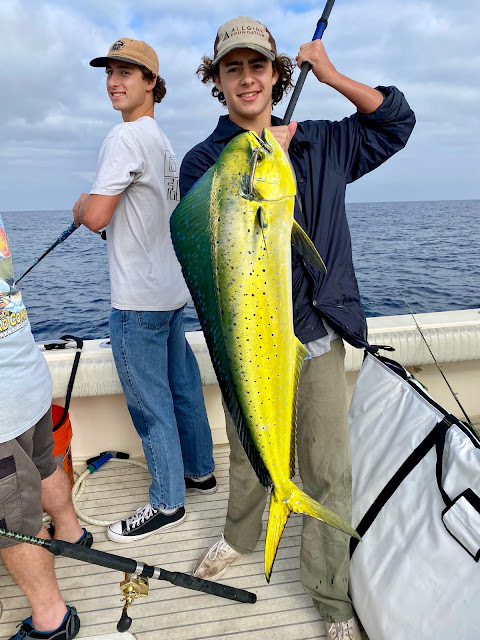 The slightly larger bulls tended to go deep and nod hard, like yellowtail, after a couple of surface runs. 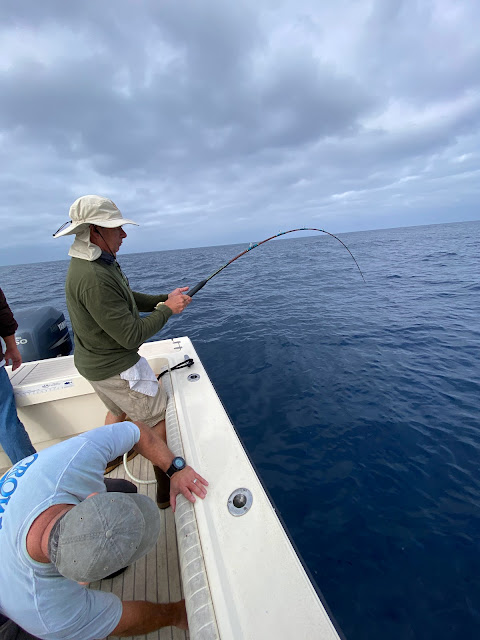 The hens tended to stay on the top and really twisted and spun away from the gaff at the rail, so a quick stick across the back was the ticket. 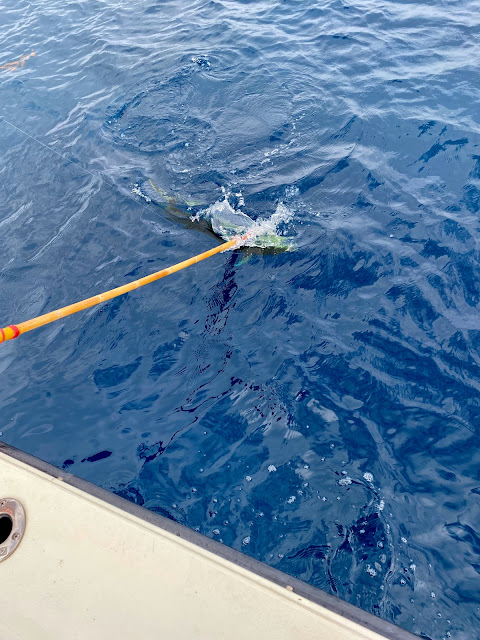 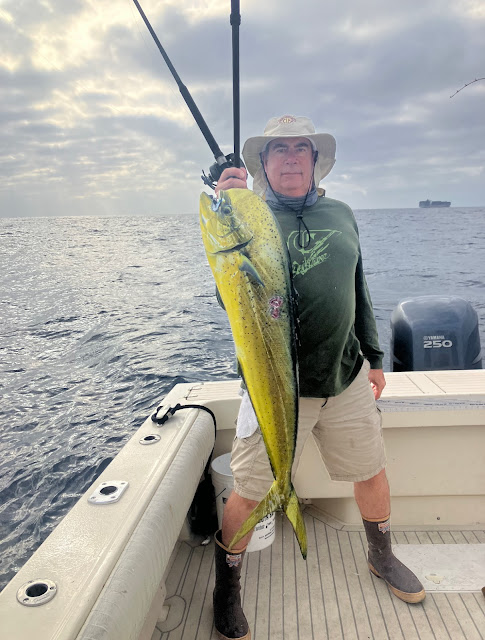 The fish were all good sized, ranging mostly in the 13-17 pound range.  This one caught by your reporter had a fresh gaff hole in the back, as Skipper made a perfect head shot on a fish that was caught after its second and more fatal mistake of the week. 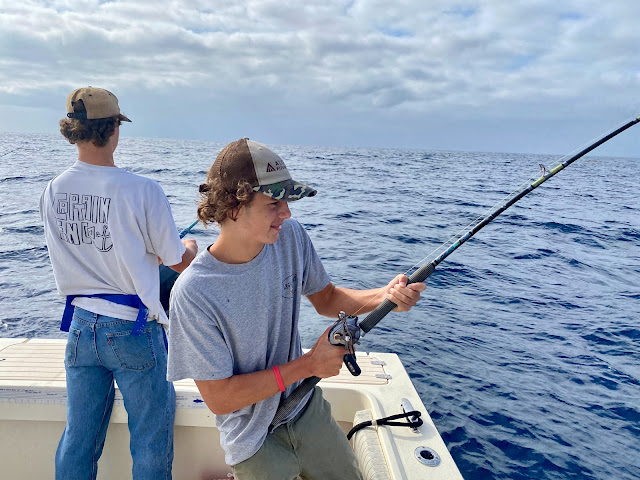 The boys pulled on a double in the corner.

Over the next couple hours, we pulled limits of really nice fish and decided to push toward the 181.

Initially, we trolled a few assorted cedar plugs and small tuna feathers at 7 knots while trying out Skipper's new outriggers.  After a while, Skipper and I decided to break out the heavy artillery we were dying to use and drag the hi-speed Nomads in the hope of a blind strike from a bluefin while looking for paddies at 12-13 knots.  This is really hauling ass for trolling and allowed us to cover a lot of ground with the scouts in the tower.

The downside to this program is that the lures are generally a thousand feet behind the boat to account for the wake-shy tastes of bluefin.  Fortunately for us, there were hardly any other boats anywhere to cut across our line, despite the fact that we were hitting pretty generic water.

Each time we saw a promising paddy, we had to grind in our lures like winch monkeys and plot our drift with the bait gear.  We hit some paddies that were absolutely mouth-watering, but did not produce. 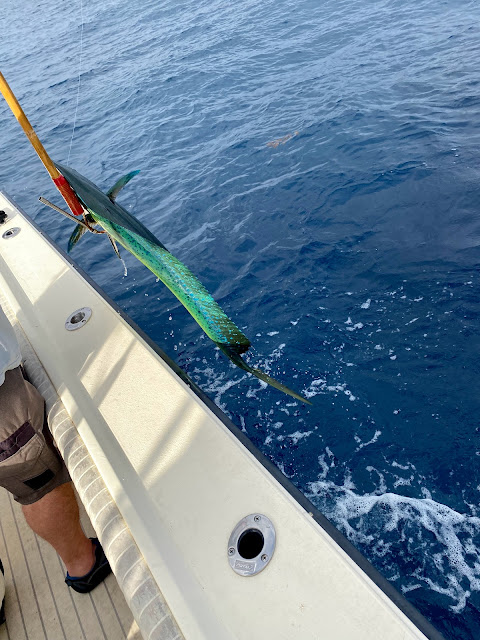 Skipper did pull one more off a paddy.  We did not stay because we had tuna fever, so it was once again back out with the two big rigs.  Skipper had his International 50 on the port and I put out my Tiagra 50 wide on starboard, with 200 pound mono backed by 200 pound spectra.  We fondly refer to it as The Pig.

David was asleep in the v-berth and Tommy was sleep-scouting in the tower when a gust of wind took Tommy's Allgire Foundation fishing hat off his head, causing him to reach back in vain as it blew into the sea near the 312.  As he began to sound the Hat Overboard! alarm, the Pig began to grunt the low frequency siren of its clicker.  We had specifically set the drag to very light tension, so the line raced off the spool as the boat remained in gear.

I got on the handle and brought the drag lever into increasing tension as the fish began to slow.  We all wanted it to be a bluefin, so I went through the exercise of verbally exorcising every other alternative fish, hat, or clump of kelp that could account for the line coming off the reel.

Soon the line stopped  going out and the rod tip lost some of its tension.  I started turning the handle furiously and it seemed our prey had either freed itself or was coming right at us. 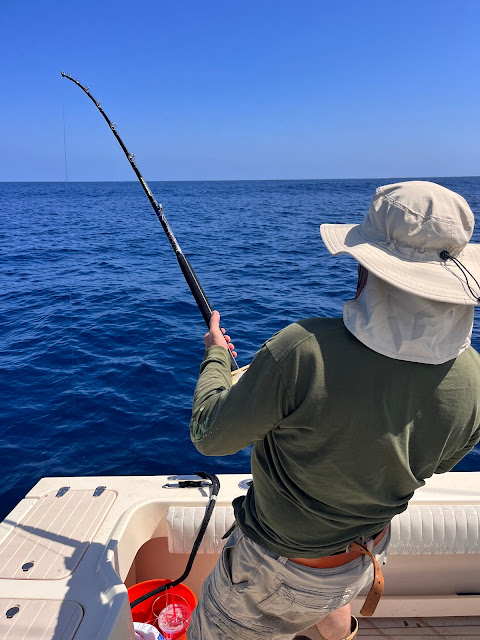 I assumed the latter and kept winding furiously as the line came tight again and the fish took another short run.  Skipper kept the fish away from the boat and had to accelerate to keep the fish from passing us on the starboard.

We got ahead of it and it started to go from one side of the motors to the other as I fought it stand-up style to keep the line away from the props.  The fish started coming to the boat steadily as the rod provided lift and the reel inexorably dragged him closer.  Skipper kept him away from the props with some matador steering as we arced away from his attempts to cross below us.  Soon he started to pinwheel in nice circles as we kept his head up and spiralling toward the surface.  He was no match for this machinery. 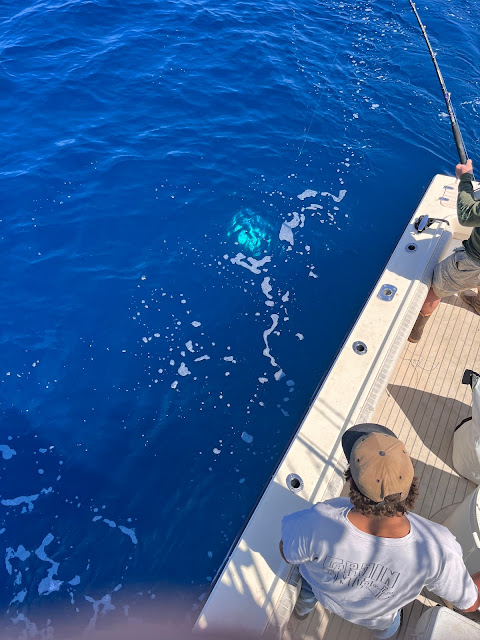 We pegged the 12 foot leader as Skipper put it into neutral and got into the stern for a shot with the gaff made just for this occasion.  With Tommy filming from the tower, your reporter grabbed the line to pull the last six feet into range as the tuna spun up next to the rail.  Skipper stuck it in the pectoral as it gushed red.  David came in from the other side with a second gaff and the two of them heaved it over the rail.  It hit the deck with a very satisfying thump as we screamed like chimpanzees.  We have a video, but I am too lame to include it in this report. 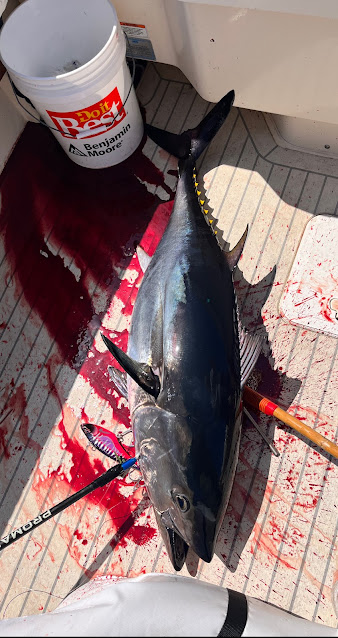 We bled it, gutted it through the head and took out the gills before ramming an ice bag to replace its guts and start cooling it off in the kill bag with all of the stiff, cold dorado and rock salted ice.

We turned toward home and put out the trollers, knowing we had our work cut out for us to clean all these fish and make it to Pedro by midnight. The water got steadily warmer, climbing to nearly 74 degrees by the time we got to the backside of Catalina. We stopped off at some paddies, but were mostly trying to make it to the lee of Catalina to start cutting fish before dark.  We pulled into a cove short of Long Point and Skipper began the wet work with a knife whose blade grew as weary of the cleaving as Tommy did trying to stand up and watch. 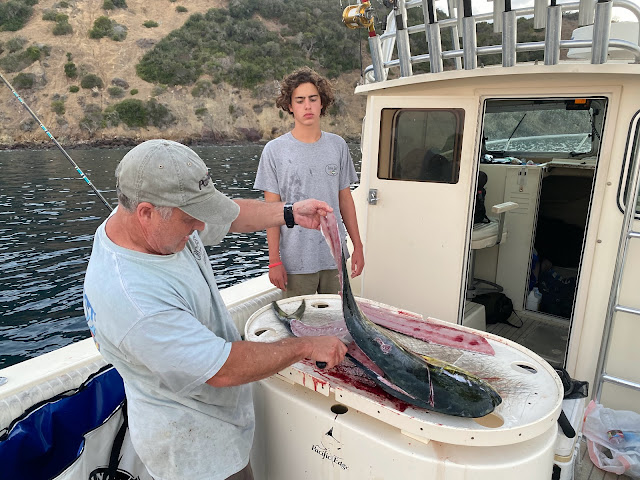 It was well into the dark of night when the boys hoisted the tuna for Skipper to start  carefully carving with the fresh knife he had saved for butchering this incredible gift from Poseidon. 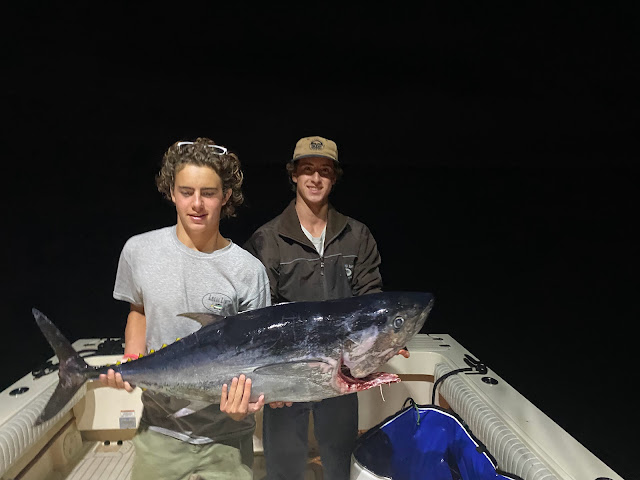 This trip was reminiscent of another memorable day that Skipper brought us five years ago.  He sent me the picture below to remind me of the occasion and chart the growth of our young crewmen. 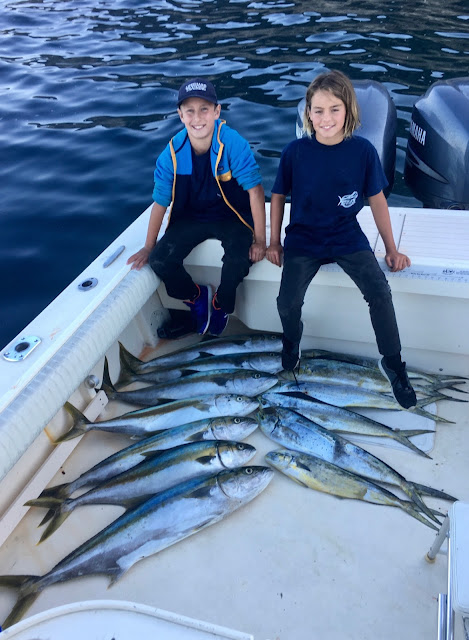 Tommy and David once again proved to be our lucky charms as we found a way to rival one of the best angling days of their young lives, and of our old ones.

We spent a couple hours cutting our catch and then cleaning up the boat when we nosed into Pedro.  We drove home after picking up more ice and staggered into the house around 1 am before crashing hard after a 25 hour tour.  It was like Gilligan's Island grad school.

The past five years have presented some of the most amazing fishing opportunities in local waters in my nearly 60 years (gulp) of fishing and paying attention to what we could catch in our lifetimes and what Zane Grey wrote about catching 100 years ago.

It is as good as it gets right now, so make your own luck, trade your hat to the ocean for a tuna and turn that handle while you are above ground, because 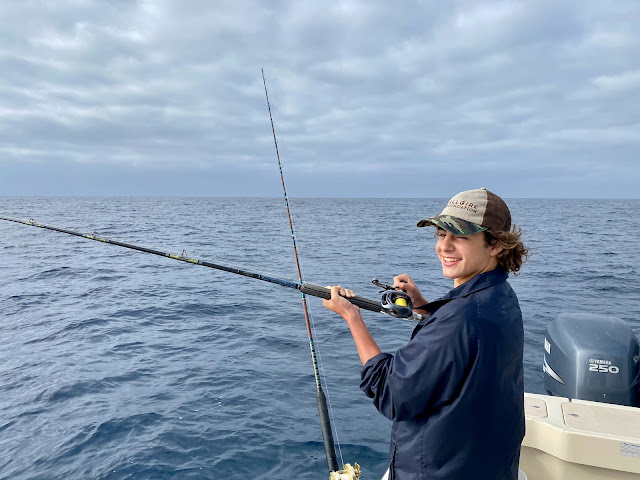