The Romance of Sunset Tuna

Kurt , his son Scott, my son Isaac and his girl Sera agreed to go out for what has become the usual siege of fuel and bait against the shoals  of tuna that have invaded our very backyard to the sea.  Isaac heads off to Berkeley next week, so this was the last chance in this exceptional summer for me to fish with my favorite and most-helpful  fishing companion.  Isaac has grown into an accomplished waterman who can do everything on the boat and help less experienced anglers find success.

We were about 20th in line for bait at 3:30 am at the Dana bait barge, where we got about a 70/30 mix of big sardine and bigger mackerel.  We got an extra ½ scoop for chop and chum, in case the bait tank mortality was too thin.  No worries about that.  Like most of this year’s fast turn-around bait, the sardines succumbed to the mackerel’s fullback style orbit.  They were too numerous and we were too lazy in the choppy ride to try and separate them.

We decided to avoid the masses heading toward the spots off the county border.  We punched out into radar driving and chop during the last hour of a pretty great meteor shower.   Sea temps outside the harbor  started at 68 and got warmer as we made our way out.   It was 71 when we started fishing in the early light at the 267.  We trolled around for nothing and none of the paddies we stopped on to chum and drift were marking fish.  Channel 72 was filled non-stop with the usual howling, begging and vulgarity that characterizes  weekend Piscatoria.

We hit the 209 for much the same thing as the wind on the lumpy seas freshened.  We found more promising and numerous paddies, but none produced.  We hit the 277 and found 71-72.4 water, no birds and lots of nice kelps that consumed our bait and chum.  We trolled back towards San Clemente and decided at 1:40 to beat it Back to Dana to get more dines and we moved the mackerel to the center tank.  We re-baited with the dine/mackerel  party mix and headed out to a blue whale we marked, along with some fish below.  These were the first fish we had marked all day.

Within a mile of the harbor entrance, we had a marlin swim by and then pop up again right under our bow when we stopped to try and locate it.  We cast a mackerel in the direction we last saw it and trolled around without raising it.  We found the whale and a huge kelp nearby, but it was only 2.5 miles out.  We baited/chummed the spot and had our backs turned when the whale came up less than twenty yards from our shut down boat.  It came right over to us and swept virtually under our pulpit to huff some big mist out of its salad-bowl sized blowhole.  We got nothing, but  were not discouraged, as almost all of our tuna this year have come near sunset after a hard day of fishing for little or nothing.

We zig-zagged all over the off shore lane running from Dana to Carlsbad, looking for paddies, birds and marks.  At Carlsbad, in 72 degree water at about 6 pm, we headed in from about 13 miles out and saw a tern ahead flutter the right way.  We headed towards it and watched as a storm of birds began to form at the spot and then race to the northwest at more than 10 knots.  We banged into the swell  and setting sun to give chase and head off what looked like a pod of miniature dolphins and turned out to be tuna acting the same way.  We got into their paths and threw chopped chum and either almost dead, or dead sardines.  We got hooked up  times three and landed two. 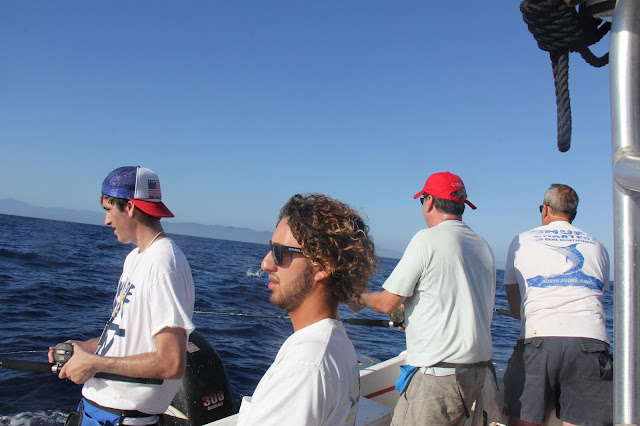 Anglers prepare for charging school of tuna splashing toward Fishfinder 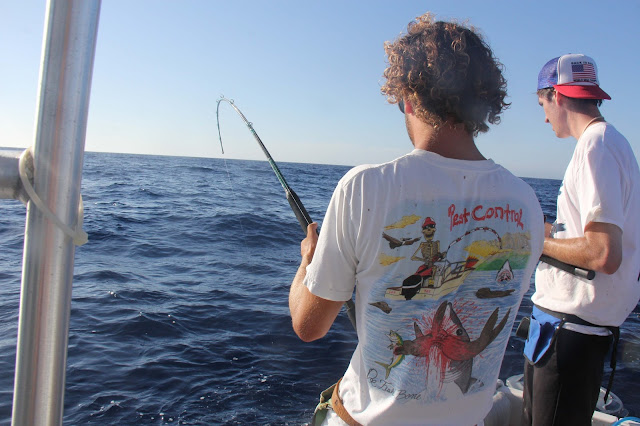 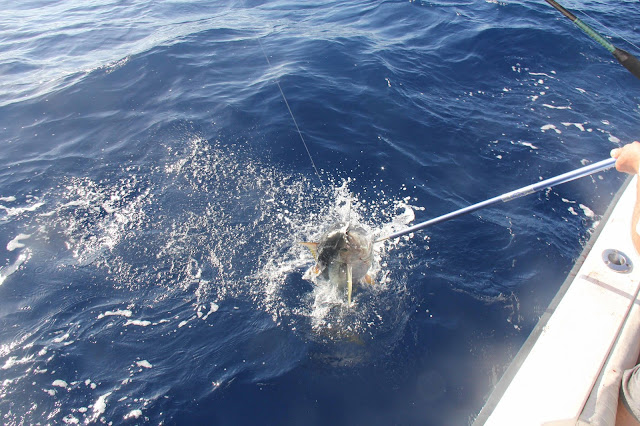 By then, the tuna were gone and were probably several miles away.  We rode straight into the sunset in pursuit and found them on the same course.  We got in front, but they turned left and we had to wind in and chase, dragster style, as the sun got low.

Scott poses for Glamour Shot as anglers go bendo behind him 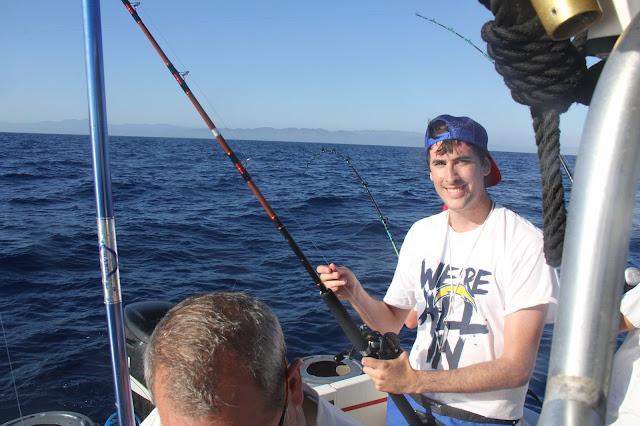 We found them again and had more chop to feed them.  We hung another three and got them into the boat.  These were 35 pound models.  Sera made her fishing debut with a quality yellowfin.  We headed back into a jarring chop and butchered our catch on the new table I built to save my wretched back from the crappy cutting board and wet towel combination with which I have been getting by. 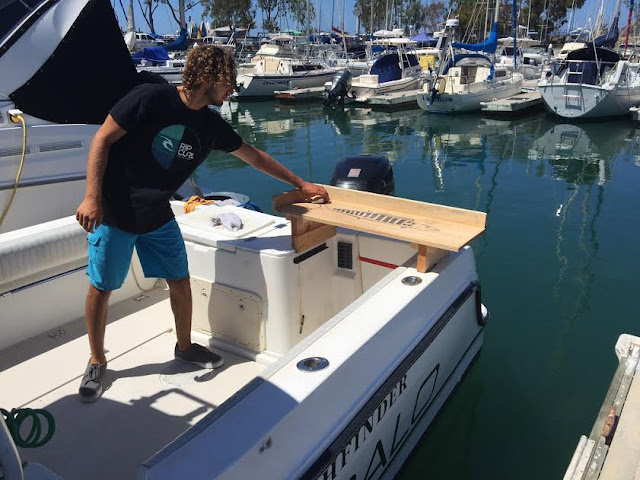 We lost a couple large tuna that ended up virtually spooling us and then grinding back through the desperation drag we pressured up to stop from getting spooled.  We should have backed down on the drags once we got back enough line to calm down, but nobody’s perfect. 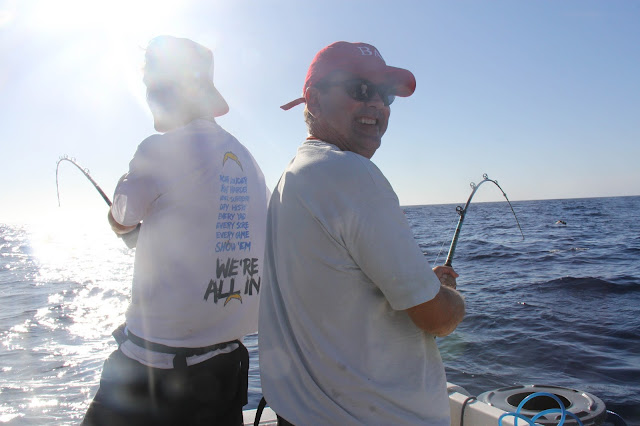 Father and SUN on a double 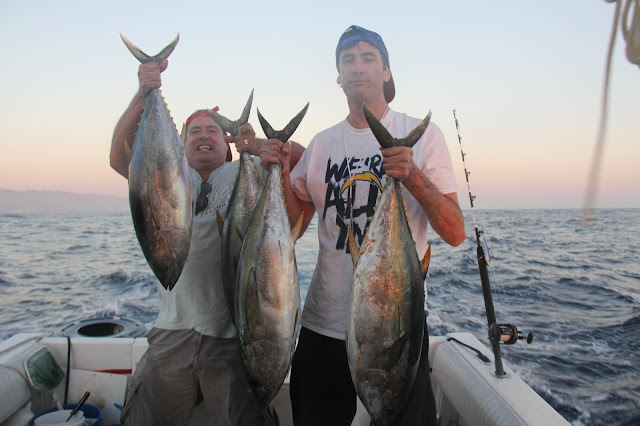 This is almost exactly the same thing we did last week when we got 3 yellow fin and one big dorado in the morning and then went back for bait to take advantage of a sunset bite down south that got us 2 more dorado and 6 more yellowfin.  We chummed furiously to bring the tuna to a paddy isaac found that was initially holding a few dorado. 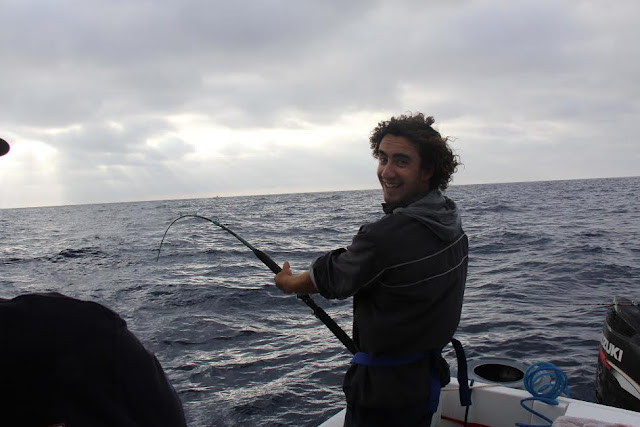 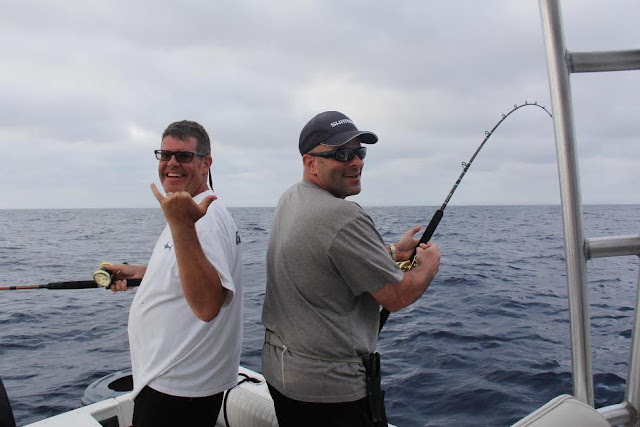 Rob and Erik on last week's evening bite, when we got 9 tuna and 3 dorado

We were offloaded and driving for more ice and home before 11pm.  19  hours;  106 gallons of fuel; and 2 ½ scoops of  bait for five 30 plus pound tuna we got lucky enough to find again with the people we love. 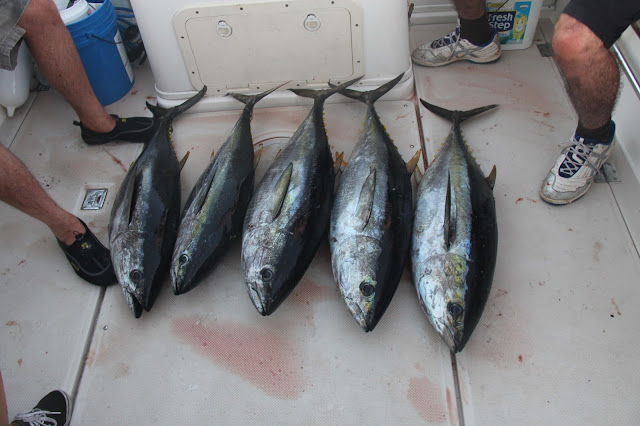 Time is the stream we all go fishing in, and these times are as spectacular as the meteors that greeted us when this trip started. 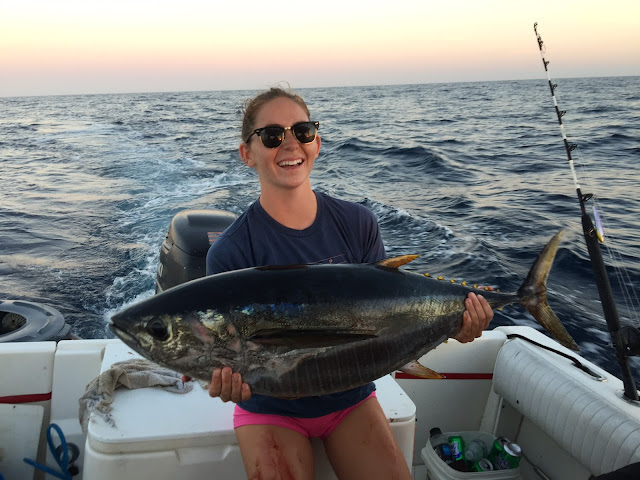