I took Tommy, my 7 year old (David declined) down to go surf fishing yesterday morning and it was a very glorious day at Salt Creek Beach.  The crowds were thin enough so that we could get a late start at 8:30  and get to productive water ahead of most beach goers.  The lack of waves also contributed to getting a pretty swimmer-free zone with which to work.  The water was surprisingly clear, the incoming tide was just right, the wind was slightly offshore and the waves/seaweed were not a factor (often the kelp blowing back and forth in the surf makes it unfishable).

Tommy is getting pretty independent at surf fishing and can cast and retrieve, as well as catch sand crabs for bait as he fishes.    Yesterday, he did not need to stay right  next to me me as we worked back and forth along a stretch of beach.  He caught several large perch that he only needed help releasing.   At the beginning of summer Tommy could not cast and would only reel in if someone handed him a hooked up rod.

It was a very remarkable day to actually get to see fish in the water.  Tommy was able to spot fish cruising the shallows and identify many of them.  We saw leopard sharks, corbina, perch and various rays.  Tommy claimed he saw a white seabass that was bigger than he was (I have never seen that, but they do cruise the beach and can get absolutely huge).  We saw the most corbina I have ever seen in one morning.  They come into water that is less than 6 inches deep and sometimes get their backs out of the water as they  coast in on the foam to feed on sand crabs before flashing out underneath incoming waves.

Anyway, we were catching and releasing many pretty good fish for little crowds that stopped to watch us reel in.  Folks are usually surprised when you catch fish right off the beach like that.  I handed off to Tommy what I thought was a big corbina (the prized surf fish above all others), but it turned out to be a shovel nosed shark that screamed off line and took him all over the place before we beached it for the crowd and heaved it back into the sea.

I managed to sight cast ahead of the largest corbina we saw that day (very line shy fish) and saw him disappear toward the cast, after which I got bit and ended up landing one of the biggest ones I have ever caught in my life.  It took close to ten minutes to bring it in as it made several runs and then would stop and frame itself in the lens of a forming wave, which made it look really big. I would like to think he was the one I was casting to.  They are really good to eat, although I have not kept one in twenty years. It was two feet long and we released it to the approval of onlookers. If our kitchen had been put back together, I might have brought it home.

I did not bring my camera, as we were in the surf at times.  This is the main type of fishing we have done this year and we have had some real good days (as well as days when conditions made it impossible) but this is probably the best conditions we have fished in all year.  We left them biting in the sunshine at noon.

Happy Halloween.  We are still not sure what we will be.  Something with swords, I’ll bet. 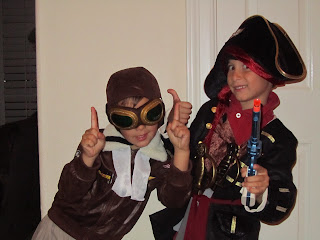