Friday afternoon I joined skipper Larry Marks and Dennis Sinclitico on Larry’s 28 foot Parker, Legal Limit, to ditch work a little early for a run over to the backside of Catalina for a shot at the white sea bass, which we heard had been biting in the late afternoon.  Our plan was to pick up a load of live squid at the San Pedro Bait barge and round Church Rock by 5 pm.

We ran over in about 15 knots of wind with moderate chop in 62 degree water after tanking up on big squid.  We hit a patch of warm water (over 64 degrees) at the Avalon Bank before rounding the corner and setting up in 38 feet of water about 500 yards to the west of a cluster of boats on the backside between Church and the Vees.

We ran out a perforated chum bucket and almost immediately generated an encouraging bait build-up from the kelp to our stern. We were fishing big hooks, small sliding sinkers and short top shots of 40 to 50 pound Seaguar fluorocarbon leader tied into spectra. 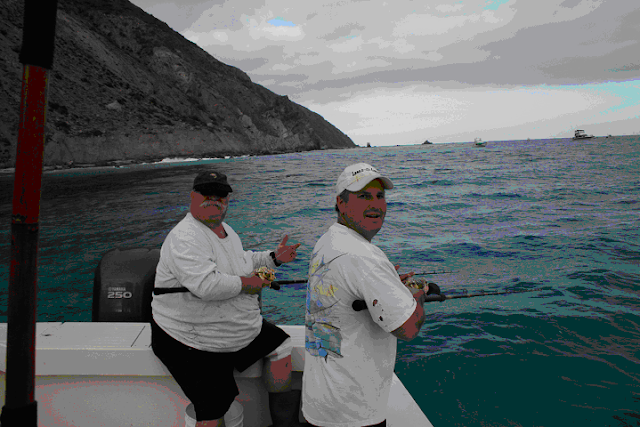 Within 15 minutes, the pecking of baitfish on our lines was replaced by Dennis calmly uttering “There’s something”, as his line began ripping off the reel.  Larry went off a few seconds later and the frenzy began, as both fish fortunately made their first run to deep water and away from the kelp. 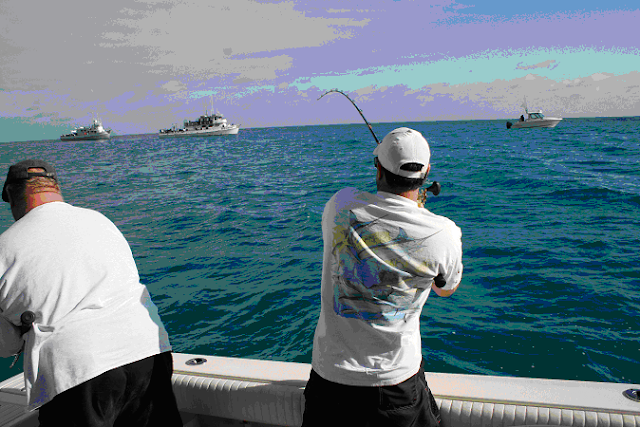 I gaffed Dennis’ fish, which was about 20 pounds and put Larry’s larger model on the deck a few minutes later, hoping I could cash in on the madness.  As I thumped Larry’s fish on the deck, my own rod went bendo in the holder and I traded the gaff to arc into something that felt like a brute.  I had the heaviest gear -  a Torsa 20 with a 50 pound topshot, matched with a nine foot Calstar jig stick, so I could really tighten down and wind hard to keep my fish turning back to the boat.  That rig made short work of what for me was an easy personal best in the croaker department, as Larry sunk the gaff home and dragged my monster over the rail. 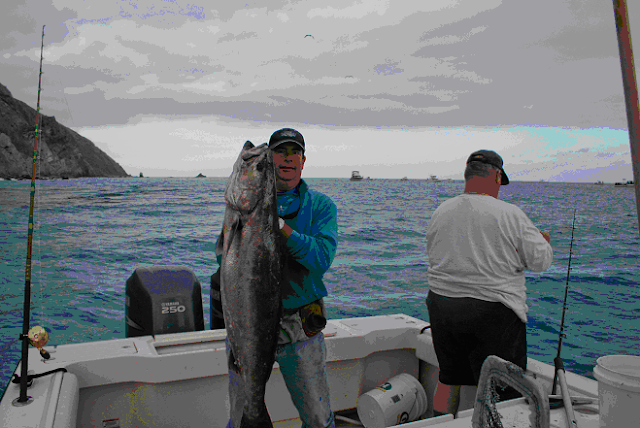 The Freedom and Big Game 90 moved into a spot a few hundred yards to the outside of us and they began to light up the rail as well.

Larry proceeded to hook three more, the last of which we released.  The five 20 to 50 pounders we had in the cooler after seemed like more than enough. 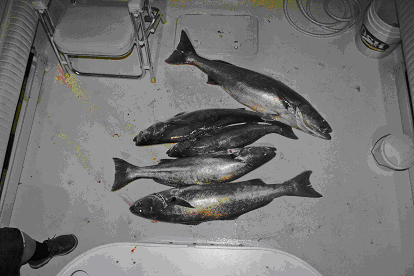 We did all of our damage, including a smattering of calicos, sheephead and an angel shark, by 6:30. Though we had planned to spend the night on the boat at the island, we headed back to Cabrillo Marina in the twilight at 30 knots.

Though I have caught a few over the years, these fish have always been pretty elusive for me, especially the big ones. We get to scarf croaker for our Father’s Day BBQ.  It is nice when your fantasy plan actually completely works out.  This doesn’t happen very often to us, so I just have to tell.